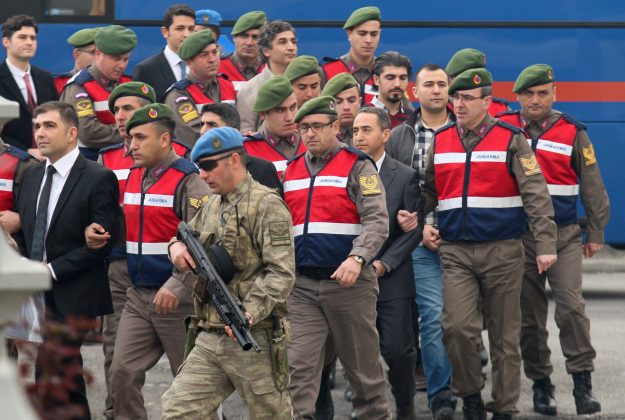 Turkish soldiers accused of attempting to assassinate President Tayyip Erdogan on the night of the failed last year's July 15 coup, are escorted by gendarmes as they arrive for the first hearing of the trial in Mugla, Turkey, February 20, 2017. REUTERS/Kenan Gurbuz

MUGLA, Turkey (Reuters) – Prosecutors called for life sentences for more than 40 Turkish soldiers on Monday at the start of their trial for attempting to assassinate President Tayyip Erdogan during last year’s failed coup, according to the indictment obtained by Reuters.

Under tight security, the defendants were bussed in to a courthouse in the southwestern city of Mugla, not far from the luxury resort where Erdogan and his family narrowly escaped the soldiers, fleeing in a helicopter shortly before their hotel was attacked.

More than 240 people were killed during the July 15 failed coup, when a group of rogue soldiers commandeered tanks, warplanes and helicopters, attacking parliament and attempting to overthrow the government.

On Monday, prosecutors in Mugla charged 47 suspects, almost all of them soldiers, with charges including attempting to assassinate the president, breaching the constitution and membership of an armed terrorist organization.

It was not immediately clear how all the suspects would plead. One of the first defendants to testify admitted to accepting a mission to seize, but not kill, Erdogan.

“My mission was to take the president and bring him to Akinci air base safe and sound,” Gokhan Sonmezates told the court, referring to a base outside Ankara that briefly functioned as a command center for the coup plotters.

Turkey says the coup was orchestrated by a U.S.-based Muslim cleric, Fethullah Gulen. The cleric, who has lived in self-imposed exile in Pennsylvania since 1999, has denied the charges and condemned the coup.

Since the failed coup, more than 40,000 people have been arrested and more than 100,000 have been sacked or suspended from the military, civil service and private sector.

Turkey launched its first criminal trial related to the coup in December and more trials are expected.

Sonmezates, a former brigadier general, was described in the indictment as a leader of the mission, something he denied in court. He also denied charges that he was a member of Gulen’s network.

“It was for the country, for the nation, to stop the decay domestically, to put an end to the bribery, to protect my country from the PKK,” he told the court, referring to the militant Kurdistan Workers Party (PKK).

The suspects, who include Erdogan’s former aide-de-camp, were wearing suits when they were brought from prison to the courthouse. They were met by a crowd of some 200 people waving flags and calling for their execution.

“We want the death penalty. Let the hand that tried to harm our chief be broken,” said one of the protesters, 61-year-old Zuhal Ayhan, referring to Erdogan. “I’d give my life for him.”

Turkey formally abolished the death penalty as part of its 2002 European Union accession talks. Since the coup, crowds have repeatedly called for it to be restored, a move that would likely spell the end of Turkey’s bid to join the EU.

The area around the courthouse was cordoned off and patrolled by dozens of security force members, including police and special forces. Snipers stood on nearby rooftops.

Forty-four defendants were brought in, while three remain at large and are being tried in absentia. The courthouse in Mugla was too small to handle the number of defendants and authorities said the trial was being heard at the conference room of the chamber of commerce next door.

According to the indictment, some 37 soldiers were charged with a having a direct role in the storming of the luxury Grand Yazici Club Turban, others are those who provided assistance to the operation.

The soldiers in helicopters descended on the hotel in Marmaris, on ropes, shooting, just after Erdogan had left.

In an interview with Reuters after the coup, Erdogan said his faith as a Muslim helped him and his family escape unscathed.