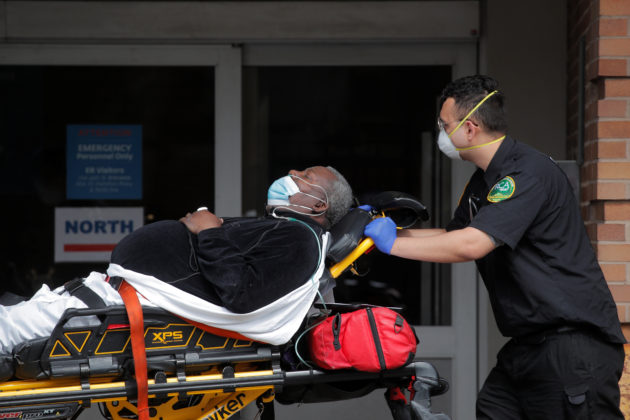 By Peter Szekely and Maria Caspani

NEW YORK (Reuters) – An influential university model on the U.S. coronavirus pandemic on Wednesday scaled back its projected death toll by 26% to 60,000 but a federal health official warned of a second wave of infections if Americans relax “social distancing” practices.

The downward revision in the death toll in the University of Washington model – often cited by U.S. and state policymakers – coincides with comments by some political leaders that caseloads may have reached a plateau in certain areas.

Those assessments in recent days, including an apparent leveling out in hospitalizations in New York state – the U.S. epicenter of the pandemic – are tempered by a persistent climb in the U.S. death toll, which rose by more than 1,900 on Tuesday as some 30,000 new infections were reported.

New York Mayor Bill De Blasio told a briefing on Wednesday that coronavirus-related hospitalizations in the most populous U.S. city had stabilized and that the need for ventilators was lower than projected.

Even that revised forecast suggested months of pain ahead for the United States. All told, about 400,000 U.S. infections have been reported, along with roughly 13,000 deaths.

“What’s really important is that people don’t turn these early signs of hope into releasing from the 30 days to stop the spread – it’s really critical,” said Deborah Birx, the coordinator of the White House coronavirus task force, referring to guidelines aimed at reducing the spread of the virus.

“If people start going out again and socially interacting, we could see a really acute second wave,” Birx added.

The pandemic has upended American life, with 94% of the population ordered to stay at home and nearly 10 million people losing their jobs in the past two weeks.

Hospitals have been inundated with cases of COVID-19, the respiratory disease caused by the virus, resulting in shortages of medical equipment and protective garments.

The University of Washington’s Institute for Health Metrics and Evaluation model is one of several that the White House task force has cited. It now projects U.S. deaths at more than 60,000 by Aug. 4, down from the nearly 82,000 fatalities it had forecast on Tuesday.

The White House coronavirus task force has previously projected 100,000 to 240,000 Americans could die.

The institute also moved up its projected peak in the number to U.S. deaths to this Sunday, when it predicted 2,212 people will succumb to the disease. The revision moves forward the projected peak by four days, suggesting the strain on the country’s healthcare system will begin to abate a little sooner than previously expected.

New York’s de Blasio estimated an undercount in the death toll of 100 to 200 people per day who are dying at home but excluded from the city’s rapidly growing coronavirus count. So far the city’s announced death toll has reflected only COVID-19 diagnoses confirmed in a laboratory.

But after a spike in the number of people dying at home, the city will now try to quantify how many of those died from coronavirus-related causes and add that to the its official death toll, New York’s health department said.

“Every single measure of this pandemic is an undercount. Every. Single. One,” Mark Levine, chairman of the City Council’s health committee, wrote on Twitter. “Confirmed cases? Skewed by lack of testing. Hospitalizations? Skewed by huge # of sick people we are sending home because there’s no room in ERs. Deaths? Massive undercount because of dying at home.”

The state of New York accounts for more than a third of U.S. confirmed coronavirus cases, and nearly half the cumulative death toll.

Authorities in various states in recent days have disclosed data showing that the pandemic was having a disproportionate impact on African Americans, reflecting longstanding racial inequities in health outcomes in the United States.

De Blasio said there were “clear inequalities” in how the coronavirus is affecting his city’s population.

In New York, long weeks of fighting the pandemic were taking a toll on hospital staff, some of whom are coming down with the disease they have been fighting.

One resident doctor at New York-Presbyterian Hospital said he had been surprised by the number of hospital workers infected.

“There are people around the hospital who are sick and now they’re showing up on our patient list. … It’s hard not to see yourself in them,” the resident said. “A lot of us feel like we are being put in harm’s way.”