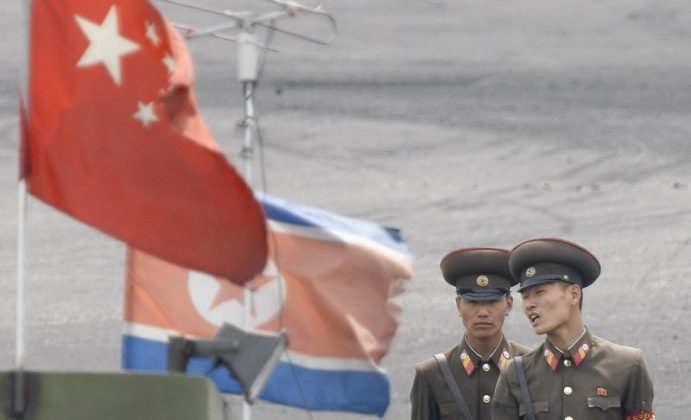 FILE PHOTO: North Korean soldiers chat as they stand guard behind national flags of China (front) and North Korea on a boat anchored along the banks of Yalu River, near the North Korean town of Sinuiju, opposite the Chinese border city of Dandong, June 10, 2013. REUTERS/Jacky Chen

Asked when such sanctions could be expected and whether they could come within 30 days, Susan Thornton, the acting assistant secretary of state for East Asia, told a Senate sub-committee hearing:

“We have been working on coming up with a new list of entities that we think are violating … I think you’ll see something fairly soon, yes.”

Thornton said the United States would prefer to cooperate with China in going after entities doing business with North Korea in violation of U.N. sanctions.

“But we are perfectly prepared to act on our own,” she said.

“I think the Chinese are now very clear that we’re going to go after Chinese entities if need be, if we find them to be in violation, and if the Chinese feel they can’t cooperate in going after those targets.”

Thornton also said Washington was still considering whether to add North Korea back to the U.S. list of state sponsors of terrorism, from which it was removed in 2008 in exchange for progress in denuclearization talks.

“We are reviewing that issue right now … We are looking at the issue of designation,” she said, adding that she could not give a time frame for a decision.

Thornton said the United States had offered customs assistance to China to help stem illicit trade over its border with North Korea. “We are working on that with them, as are some of our like-minded allies in the region,” she said.

She said sanctions had affected North Korea’s ability to get materials for its weapons programs, but had not slowed its missile testing, as a lot of the production for this program was now indigenous.

“We are continuing to talk to China about that,” she said. “We’re continuing to try to impinge on sources of, particularly, hard currency, financing, but … it’s become harder and harder to stop this kind of activity in North Korea.”

U.S. officials said on Tuesday they had seen increased activity at a site in the western city of Kusong that could be preparations for another missile test within days.

U.S. officials told Reuters this month the Trump administration could impose new sanctions on small Chinese banks and other firms doing business with Pyongyang within weeks.