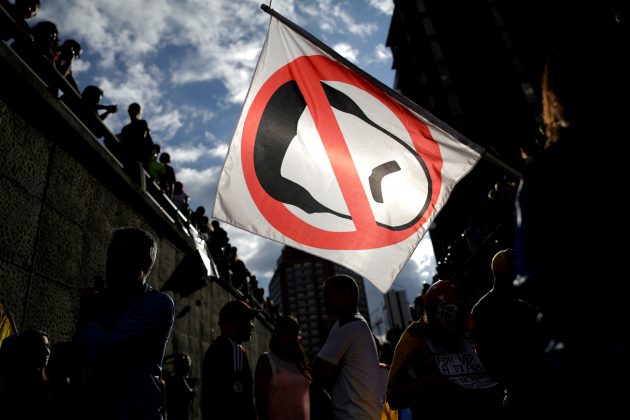 Opposition supporters carry a flag with a cartoon of Venezuela's President Nicolas Maduro while attending a rally to pay tribute to victims of violence during protests against Maduro's government in Caracas, Venezuela. REUTERS/Ueslei Marcelino

CARACAS/PARAGUANA, Venezuela (Reuters) – President Nicolas Maduro’s adversaries launched a two-day national strike on Wednesday in a final push to pressure him into abandoning a weekend election for a super-congress they say will institutionalize autocracy in Venezuela.

Neighbors gathered from dawn in cities around Venezuela to block roads with rubbish, stones and tape, while many cafes and businesses remained closed in protest against the ruling Socialist Party’s planned Constituent Assembly vote.

“We need to paralyze the whole country,” said Flor Lanz, 68, standing with a group of women blocking the entrance to a freeway in upscale east Caracas with rope and iron sheets.

“I’m staying here for 48 hours. It’s the only way to show we are not with Maduro. They are few, but they have the weapons and the money,” added decorator Cletsi Xavier, 45, beside her.

There was less enthusiasm, however, for the strike in working-class neighborhoods and rural zones where the government has traditionally drawn more support.

Overall, fewer people appeared to be heeding the shutdown than the millions who participated in a 24-hour strike last week.

Many Venezuelans, regardless of their political view, were fretting about the impact of disruptions on their wallets – and stomachs. The OPEC nation is immersed in a brutal economic crisis, with shortages of basic foods and medicines.

“I closed last week, but now I need to open in order to eat,” said Isabel Fernandez, 36, who sells vegetables at a market in the Catia neighborhood of the capital where all the stalls were open albeit with fewer customers than normal.

The opposition, which has majority support after years in the shadow of Maduro’s popular predecessor Hugo Chavez, says Sunday’s election is a farce designed purely to keep the Socialist Party in power. Its No. 1 demand is conventional elections, including for the presidency, to remove Maduro.

The 54-year-old president, who calls himself “the son of Chavez” and flag bearer of his “21st century socialism” project, insists Sunday’s vote will go ahead despite intense pressure at home and abroad including a threat of U.S. economic sanctions.

Maduro says the election for the 545-seat assembly, which will have power to rewrite the national constitution and override the current opposition-led legislature, is designed to put power in the hands or ordinary people.

“We are going to decide between war and peace, the future or the past, the sovereign power of the people or the imperialist, oligarchical coup,” he told supporters late on Tuesday of the vote, which the opposition is boycotting.

Despite the no-compromise rhetoric on both sides, mediator and former Spanish prime minister Jose Luis Rodriguez Zapatero was shuttling between the opposition and government. He discussed a proposal to postpone the vote, opposition sources said, but there was no evidence it was getting traction.

State enterprises, including oil company PDVSA that accounts for 95 percent of Venezuela’s export income, were staying open on Wednesday. Public employees – who number 2.8 million in total – had strict orders not to skip work and to vote on Sunday.

“Who can risk their work in moments like this?” said Elio Jimenez, 40, who works at an oil refinery in the Paraguana peninsula.

That took to over 100 the number killed since protests against Maduro began in early April.