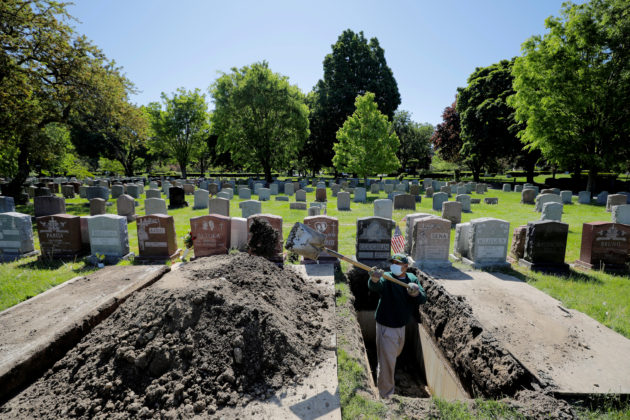 (Reuters) – The death toll from the spread of the coronavirus in the United States exceeded 200,000 on Tuesday, by the far the highest number of any nation.

The United States, on a weekly average, is now losing about 800 lives each day to the virus, according to a Reuters tally. That is down from a peak of 2,806 daily deaths recorded on April 15.

During the early months of the pandemic, 200,000 deaths was regarded by many as the maximum number of lives likely to be lost in the United States to the virus.

The University of Washington’s health institute is forecasting coronavirus fatalities reaching 378,000 by the end of 2020, with the daily death toll skyrocketing to 3,000 per day in December.

Over 70% of those in the United States who have lost their lives to the virus were over the age of 65, according to CDC data.

The southern states of Texas and Florida contributed the most deaths in the United States in the past two weeks and were closely followed by California.

California, Texas and Florida – the three most populous U.S. states – have recorded the most coronavirus infections and have long surpassed the state of New York, which was the epicenter of the outbreak in early 2020. The country as a whole is reporting over 42,000 new infections on average each day and saw cases last week rise on a weekly basis after falling for eight weeks in a row.

Deaths rose 5% last week after falling for four weeks in a row, according to a Reuters analysis.

Six out of every 10,000 residents in the United States has died of the virus, according to Reuters data, one of the highest rates among developed nations.

Brazil follows the United States in the number of overall deaths due to the virus, with over 137,000 fatalities. India has had the world’s highest daily death rate over the last week with total deaths now approaching 100,000.

(Reporting by Sangameswaran S in Bengaluru; Additional reporting by Susan Heavey in Washington; Editing by Lisa Shumaker and Rosalba O’Brien)