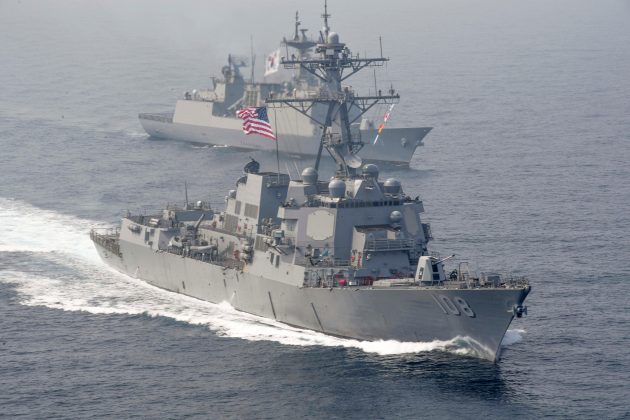 WASHINGTON (Reuters) – A U.S. Navy destroyer sailed near islands claimed by China in the South China Sea on Wednesday, the U.S. military said, a move likely to anger Beijing at a time of rising tensions between the world’s two largest economies.

The busy waterway is one of a growing number of flashpoints in the U.S.-Chinese relationship, which include an escalating trade war, American sanctions on China’s military and U.S. relations with Taiwan. Reuters reported on Tuesday that China had denied a request for a U.S. Navy warship to visit the Chinese port city of Qingdao.

The operation was conducted “to challenge excessive maritime claims and preserve access to the waterways as governed by international law,” Mommsen added.

The U.S. military operation comes amid an increasingly bitter trade war between China and the United States that sharply escalated on Friday, with both sides leveling more tariffs on each other’s exports.

The U.S. military has a long-standing position that its operations are carried out worldwide, including areas claimed by allies, and are separate from political considerations.

China and the United States have traded barbs in the past over what Washington has said is Beijing’s militarization of the South China Sea by building military installations on artificial islands and reefs.

China has called its construction as necessary for self-defense and has said the United States is responsible for ratcheting up tensions by sending warships and military planes close to islands that Beijing claims.

China’s 2019 defense spending will rise 7.5 percent from 2018, according to a budget report. Its military build-up has raised concerns among neighbors and Western allies, particularly with China becoming more assertive in territorial disputes in the East and South China Seas and over Taiwan, a self-ruled territory Beijing claims as its own.

The U.S. military last year put countering China, along with Russia, at the center of a new national defense strategy, shifting priorities after more than a decade and a half of focusing on the fight against Islamist militants.

In addition, Vice President Mike Pence, in a visit to Iceland next week, will have talks about “incursions” into the Arctic Circle by China and Russia, a senior Trump administration official said on Wednesday.

(Reporting by Idrees Ali; Editing by Chizu Nomiyama and Will Dunham)