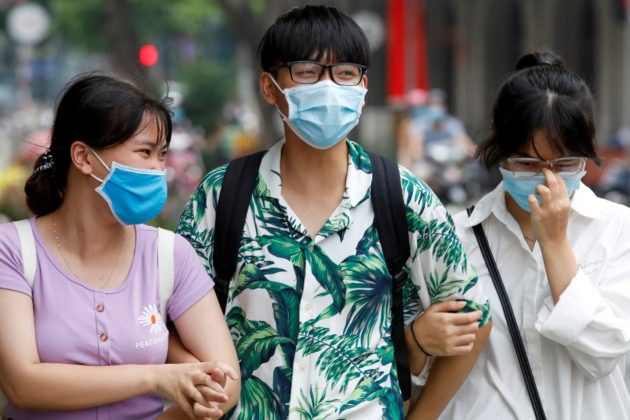 People wear protective masks as they walk down a street in Hanoi, Vietnam July 27, 2020. REUTERS/Kham

Republicans and Democrats in tough talks

U.S. Republicans and Democrats faced difficult talks on Tuesday over how best to recover from the coronavirus pandemic, after Republicans unveiled a relief proposal four days before millions of Americans lose unemployment benefits.

Senate Republicans announced on Monday a $1 trillion aid package hammered out with the White House, which Senate Majority Leader Mitch McConnell touted as a “tailored and targeted” plan to reopen schools and businesses while protecting firms from lawsuits.

But the proposal brought opposition from both sides. Democrats decried it as too limited compared with their $3 trillion proposal that passed the House of Representatives in May. Some Republicans called it too expensive.

U.S. and company officials are hopeful Moderna Inc’s vaccine against COVID-19 could be ready for widespread use by the end of this year, after the drugmaker announced the start of a 30,000-subject trial to demonstrate it is safe and effective, the final hurdle prior to regulatory approval.

German biotech BioNTech and U.S. drugmaker Pfizer Inc said on Monday they would begin a pivotal global study to evaluate their lead vaccine candidate. If the study is successful, the companies could submit the vaccine for regulatory approval as early as October.

Negligence is behind Germany’s steady rise in new coronavirus infections, the head of a state-funded research body said on Tuesday, adding it was unclear if a second wave was underway.

“The new developments in Germany make me very worried,” said Lothar Wieler, of the Robert Koch Institute (RKI) for infectious diseases. “The rise has to do with the fact that we have become negligent,” he added, urging people not to flout social distancing rules.

The number of daily new cases almost doubled on Tuesday to 633, and the RKI linked that to increased contact at parties and the workplace.

Vietnam suspended all flights to and from Danang for 15 days after at least 14 coronavirus cases were detected in the city. Two people were in critical condition.

“All evacuation flights now are cancelled,” CAAV deputy director Vo Huy Cuong told Reuters by phone on Tuesday. “We operated 90 flights to evacuate tourists stranded in Danang yesterday but most tourists had already left Danang on Sunday, mostly by coach or train to nearby provinces.”

All bus and train services to and from Danang have also been suspended from Tuesday. With over 95 million people, Vietnam is the most populous country in the world to have recorded no COVID-19 fatalities.

Fly all you want

China Southern Airlines, China’s biggest carrier by passengers, on Tuesday rolled out a “Fly Happily” deal, which allows buyers to use passes for as many flights as they wish for destinations across the country from Aug. 26 to Jan. 6 for 3,699 yuan ($529).

At least eight of China’s dozens of airlines have introduced similar deals since June. Industry watchers say the packages have been a shot in the arm.

But Luya You, transportation analyst at BOCOM International, said these promotional packages can only stimulate demand when coronavirus risks are already sufficiently reduced. “While these packages may work in domestic markets, we do not expect similar rollouts for outbound routes anytime soon,” she said.