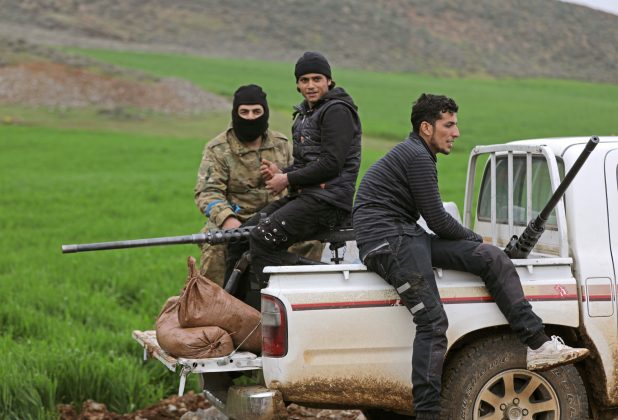 Turkish-backed Free Syrian Army fighters sit at a back of a pick-up truck near the city of Afrin, Syria February 21, 2018. REUTERS/Khalil Ashawi

ANKARA/BEIRUT (Reuters) – The Turkish army on Monday took control of the outer edge of Syria’s Afrin region, state media said, as Ankara said it was readying for a “new battle” by deploying police special forces.

The military and allied Syrian rebel factions pushed some Syrian Kurdish YPG fighters back from the frontier near the Turkish border, effectively creating a “crescent” of control on Syria’s side of the border, the state-run news agency Anadolu reported.

Since launching its operation in the northwest Syrian region, Turkey has captured 115 “strategic points” and 87 villages, Anadolu said.

The Syrian Kurdish YPG forces said Turkish warplanes had struck a village near Jandaris in the southwest of Afrin, killing five civilians.

A YPG-led alliance said its forces had responded in self-defense to Turkish attacks, and that fighting raged on multiple fronts around Afrin. Five Turkish soldiers were killed in the space of 24 hours, the Syrian Democratic Forces (SDF) said.

The Syrian Observatory for Human Rights, a UK-based monitoring group, said Turkish troops now held a continuous strip on the edge of Afrin.

The advance opens a corridor that links territory in Aleppo province under the control of rebels backed by Turkey with the insurgent stronghold of Idlib province.

Ankara sees the YPG as an extension of the Kurdistan Workers’ Party (PKK), which has been waging an insurgency in southeast Turkey for three decades – though the groups say they are independent.

Turkish Deputy Prime Minister Bekir Bozdag told the broadcaster NTV that the deployment of police special forces “is in preparation for the new battle that is approaching”.

Dogan news agency reported that gendarmerie and police special forces had entered Afrin from two points in the northwest, and said they would take part in urban fighting and holding villages that Turkish forces had seized.

Most of the larger towns in the region, including the town of Afrin itself, remain under YPG control.

Turkey says Saturday’s U.N. Security Council demand for a 30-day truce across Syria does not apply to its offensive in Afrin.

“Some regions such as eastern Ghouta are part of the U.N.’s ceasefire decision in Syria, but Afrin is not one of them,” said Bozdag, who is also the government spokesman. “The decision will not impact our Olive Branch operation … in the Afrin region.”

But French President Emmanuel Macron on Monday told Turkey the ceasefire did apply to Afrin.

The U.N. Security Council resolution demands all parties “cease hostilities without delay … for a durable humanitarian pause for at least 30 consecutive days throughout Syria”.

The cessation does not apply to military operations against Islamic State, al Qaeda and groups associated with them or other groups designated as terrorist organizations by the Security Council.

The PKK is branded a terrorist group by the United States and European Union as well as by Turkey, but the YPG is Washington’s main military ally in northeast Syria.