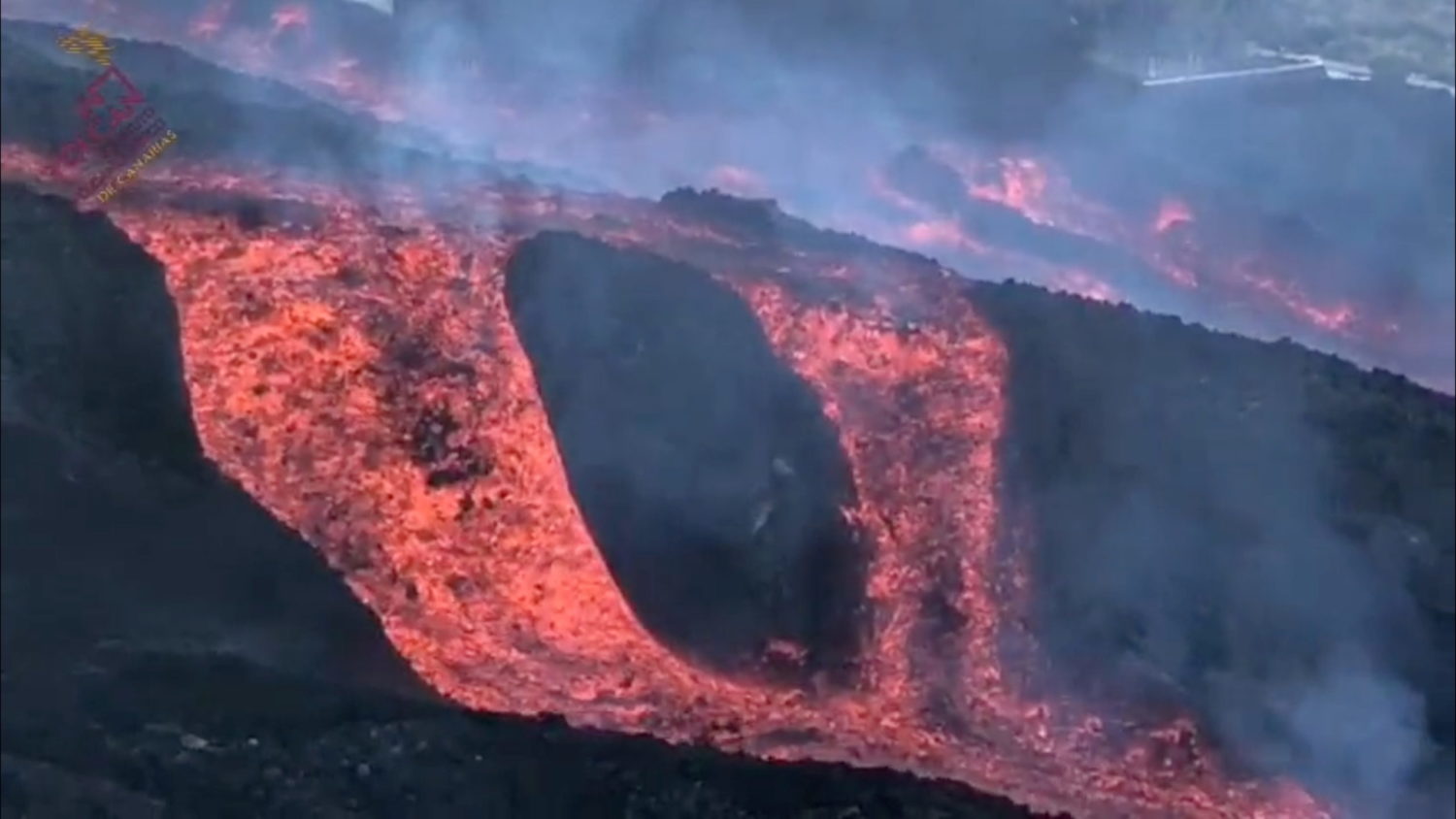 MADRID (Reuters) – Authorities on the Spanish island of La Palma ordered residents of three coastal towns to stay indoors on Monday after a new stream of lava crashed into the ocean, sending thick clouds of potentially toxic gases high into the sky.

A third tongue of lava from the Cumbre Vieja volcano, which has been erupting for two months, reached the water around midday (12:00 GMT) a few kilometers north of where two previous flows hit the sea.

Drone footage from the local council showed white clouds billowing out of the water as the red hot molten rock slid down a cliff into the Atlantic.

Residents in Tazacorte, San Borondon and parts of El Cardon were told to stay inside with doors and windows shut as strong winds blew the cloud back inland.

Soldiers from the Military Emergency Unit were deployed to measure air quality in the area.

The airport was also closed and is likely to remain so for up to 48 hours due to the unfavorable weather conditions, said Miguel Angel Morcuende, technical director of the Pevolca eruption response committee.

Residents in the capital Santa Cruz had been advised to wear masks for the first time since the eruption began due to high concentrations of particulate matter and Sulphur dioxide in the air, he said.

According to the Copernicus disaster monitoring program, lava flows have damaged or destroyed some 2,650 buildings since Sept. 19, forcing the evacuation of thousands from their homes on the island, part of the Canaries archipelago. 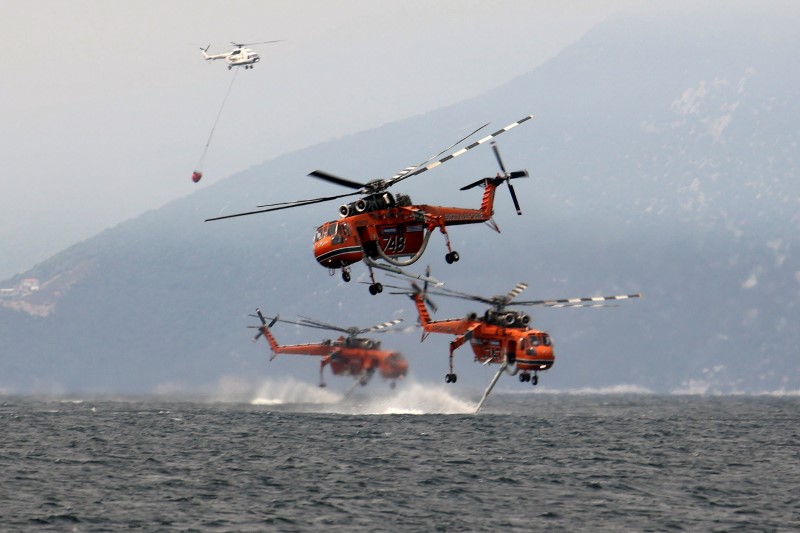 By Lefteris Papadimas and Leon Malherbe

EVIA, Greece, (Reuters) – A big blaze that swelled overnight forced the evacuation of many villages on Greece’s Peloponnese peninsula on Wednesday, as exhausted firefighters battled wildfires for a ninth consecutive day and as fires also raged in Algeria, Turkey and elsewhere.

In the north of Evia, Greece’s second-largest island, flare-ups remained the main problem for firefighters, who were joined by volunteers to combat the flames.

In the Peloponnese, a flare-up started near ancient Olympia, the site of the first Olympic Games, but spread to Gortynia as it intensified late on Tuesday, burning virgin forest and prompting authorities to evacuate 20 villages.

About 580 Greek firefighters, helped by colleagues from France, Britain, Germany and the Czech Republic, were battling the blazes in Gortynia.

At the Pefki seaside resort on Evia, cafeteria owner Thrasyvoulos Kotzias, 34, looked at an empty beach.

“If we did not have these problems the beach at Pefki would be full of people. Right now it is just us,” he said.

“If helicopters and water bombing planes had come right away and operated for six, seven hours, the wildfire would have been put out in the first day,” he said.

A Russian Ilyushin Il-76 water bombing plane arrived in Athens on Tuesday to help firefighting operations and a second plane was due to be stationed in Thessaloniki, northern Greece.

Culture Minister Lina Mendoni told reporters the wildfires in the north of Athens had destroyed a large swathe of forest in the former royal estate at Tatoi, damaging seven buildings.

“What we have lived through is unprecedented, we cannot easily forget the images we saw,” said Mendoni, adding that the fires had largely spared cultural monuments.

More than 500 fires have burned across Greece in the last week, forcing the evacuation of dozens of villages and thousands of people.

“Our climate is changing and we need to make hard choices as a species to avoid the worst,” astronaut Thomas Pesquet tweeted from the International Space Station orbiting the Earth. “My heart goes out to all affected by the wildfires and the intense heat in the Mediterranean.”

At least 65 people have been killed in wildfires tearing through forests in northern Algeria, state television reported on Wednesday. Meanwhile Turkey’s northern coast was hit by flooding after some of the biggest wildfires in the country’s history had ravaged its southeast.

Credit ratings agency Moody’s said in a report that the wildfires in Greece had highlighted its vulnerability to climate change, though it said the related costs were manageable.

The government has announced a relief package of 500 million euros – about 0.3% of nominal economic output – but Moody’s noted that devastating wildfires in 2007 caused total estimated damage of nearly 3 billion euros, or 1.3% of nominal output.

“Aside from direct fiscal support, disruption triggered by wildfires, including power and water outages, poor air quality and road closures is also likely to weigh on tourism, a credit negative for the country’s local governments,” Moody’s said.

The U.N. climate panel sounded a dire warning this week that the world’s greenhouse gas levels were high enough to guarantee climate disruption for decades. 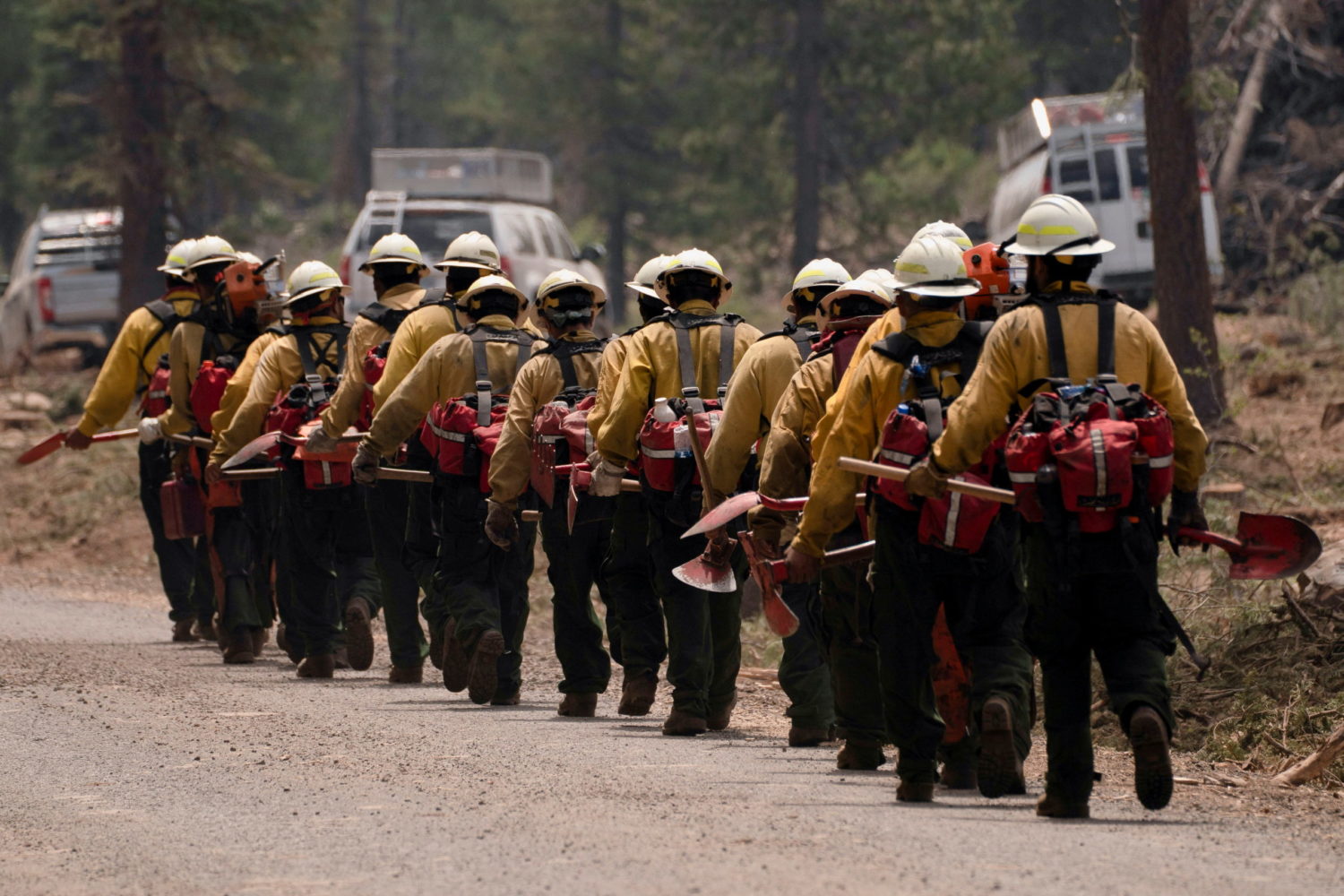 (Reuters) – Dozens of wildfires in the western United States and Canada, led by a massive blaze in Oregon, are sending smoke eastward, worsening air quality and causing colorful sunsets in some places.

More than 80 large wildfires in 13 western states charred nearly 1.3 million acres (526,090 hectares), an area larger than the state of Delaware, by Tuesday, according to the National Interagency Fire Center (NIFC) in Boise, Idaho.

But due to the jet stream and other cross-continental air currents, the regional disasters were being felt nationally.

Wildfire smoke prompted an advisory from New York health and environmental authorities on Tuesday for fine particulate matter as the region’s Air Quality Index hit 118, which is unhealthy for sensitive groups such as people with breathing problems.

AQI readings well above 100 were also recorded in other Northeast cities, including Boston, Hartford and Philadelphia.

In Cleveland and Detroit, AQI topped 125, which NIFC meteorologist Nick Nauslar said was likely caused by smoke from Canadian wildfires in southeast Manitoba and southwest Ontario.

While some smoke diffuses into the upper atmosphere after traveling thousands of miles, it still can lower air quality, Nauslar said.

Unhealthy AQI readings were recorded on Monday in parts of Idaho and Montana, which, along with Washington state, are in the wind-driven path of smoke from southern Oregon’s Bootleg fire, according to air resource adviser Margaret Key.

As of Tuesday, the fire had destroyed 67 homes and was threatening 3,400 more. An estimated 2,100 people were under evacuation orders or on standby alert to be ready to flee at a moment’s notice.

Rising smoke from the fire raging in and around the Fremont-Winema National Forest about 250 miles (400 km) south of Portland has already produced at least two pyrocumulonimbus clouds, an unusual phenomenon often called fire clouds, the NIFC’s Nauslar said.

“It can start to produce its own lightning, and essentially become a fire generated thunderstorm,” he said by phone. “This can cause rapid and erratic fire spread.” 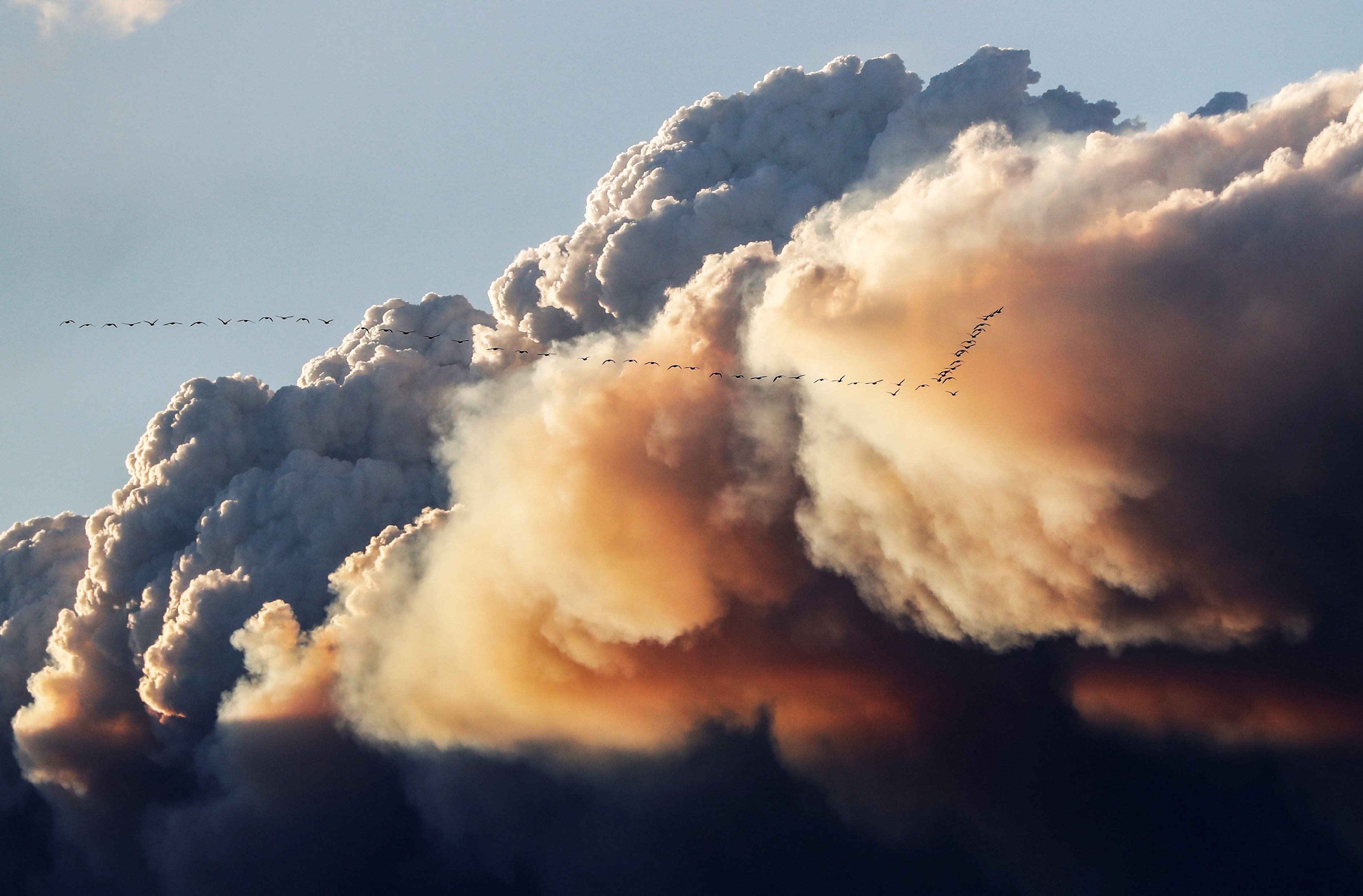 CALGARY, Alberta (Reuters) – Firefighters battling a wildfire that has threatened oil sands facilities north of Fort McMurray, Alberta, looked to cooler weather, a change in winds and the promise of rain to help them on Thursday.

A shift in wind direction from west to east is expected to push the fire back toward areas it has already burned, limiting its growth, wildfire information officer Travis Fairweather said on Thursday.

“That should hopefully result in a little less activity than we’ve seen in the last couple of days,” he said.

The fire, which hit Fort McMurray in early May, destroying entire neighborhoods, surged north on Tuesday, forcing the evacuation of 8,000 oil sand workers, destroying a work camp and prolonging a shutdown that has cut Canadian oil output by a million barrels a day.

Fairweather did not expect the fire to damage any oil sands facilities on Thursday.

The fire covered 483,084 hectares (1.2 million acres) as of Thursday morning, up some 61,000 hectares from the day before. Fairweather said cooler weather and the chance of rain on Thursday also would help contain the fire.

Some of the 90,000 evacuees who fled Fort McMurray as the massive blaze breached the city may be allowed to return as soon as June 1, officials said on Wednesday, if air quality improves and other safety conditions are met.

Some oil sands operations directly north of the city remained shuttered, although firefighters held the blaze back from Suncor Energy and Syncrude Canada facilities on Wednesday.

The fire destroyed a 665-room lodge for oil sands workers on Tuesday but officials said on Wednesday they were not aware of further industry damage.

Tuesday’s evacuations were a setback for producers, suggesting production may be suspended for longer than companies and analysts had previously anticipated.

The province’s plan to gradually allow residents back into the city offered hope but also trepidation.

“It’s exciting news but you are also scared to see what you get when you get back,” said Fort McMurray resident Ria Dickason, adding that she was concerned about smoky air.

The air quality health index, which usually stands between 1 and 10, hit 51 on Wednesday morning, before improving to 11.

“We won’t go back if it’s anything close to the levels it’s at now,” Dickason said. “My daughter has asthma so we are more alert to it.”