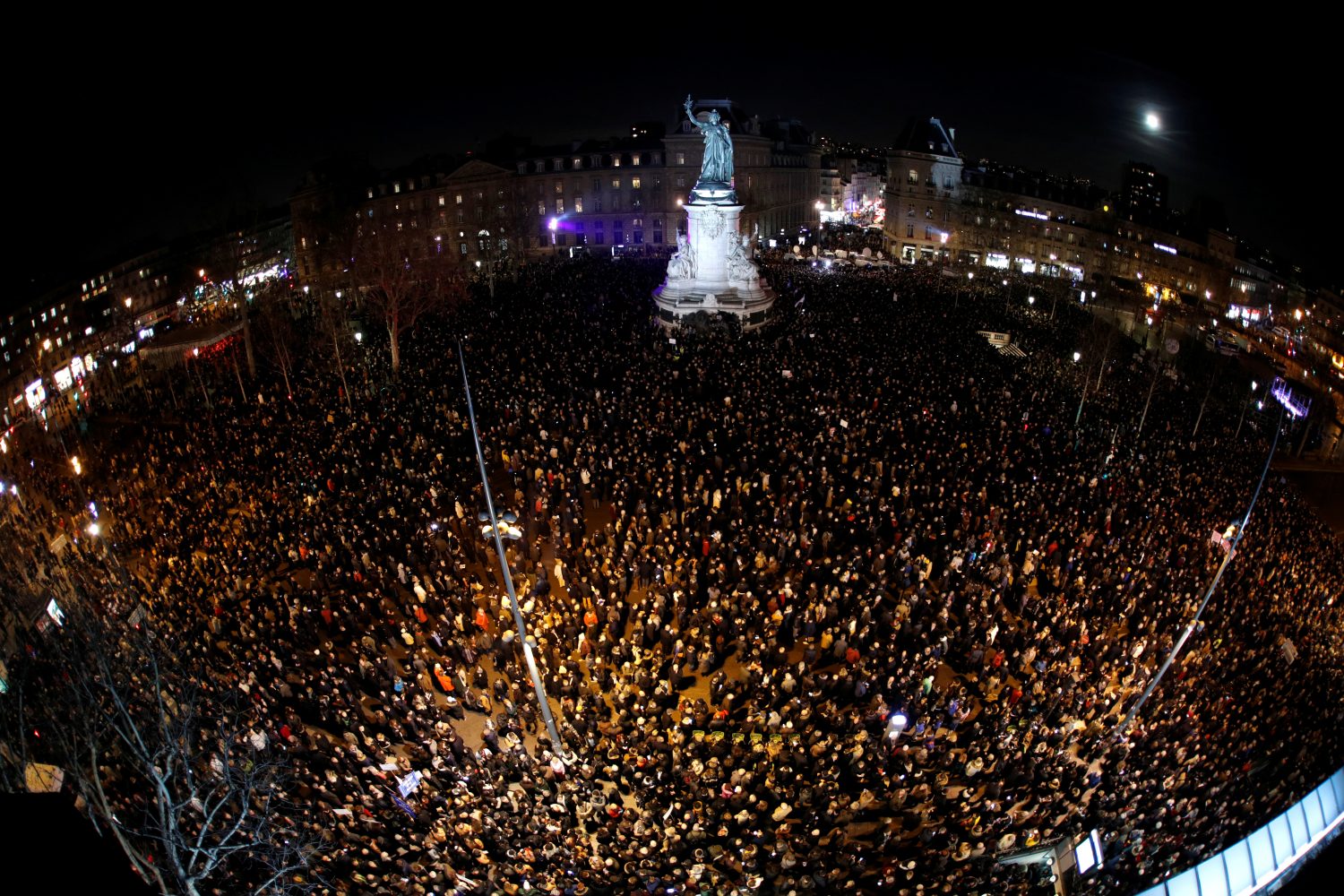 By Vincent Kessel and Noemie Olive

STRASBOURG/PARIS, France (Reuters) – Thousands of people rallied across France after a surge of anti-Semitic attacks in recent weeks that culminated on Tuesday with vandals daubing swastikas and anti-Jewish slogans on dozens of graves in a Jewish cemetery.

Political leaders from all parties, including former Presidents Francois Hollande and Nicolas Sarkozy, gathered in Paris filling the Place de la Republique, a symbol of the nation, to decry anti-Semitic acts with one common slogan: “Enough!”

People also lined the streets of cities from Lille in the north to Toulouse and Marseille in the south. 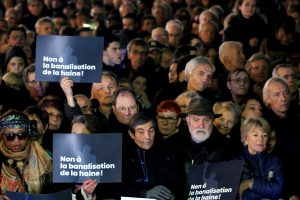 People attend a national gathering to protest antisemitism and the rise of anti-Semitic attacks in the Place de la Republique in Paris, France, February 19, 2019. Placard reads: “No to the trivialization of hatred”. REUTERS/Gonzalo Fuentes

President Emmanuel Macron paid respects at one of the 96 desecrated graves in the village of Quatzenheim, near the eastern city of Strasbourg.

“Whoever did this is not worthy of the French republic and will be punished… We’ll take action, we’ll apply the law and we’ll punish them,” he said, walking through a gate scarred with a swastika as he entered the graveyard.

Macron later visited the national Holocaust memorial in Paris with the heads of the Senate and National Assembly.

France is home to the biggest Jewish community in Europe — around 550,000 — a population that has grown by about half since World War Two, but anti-Semitic attacks remain common. Government statistics released last week showed there were more than 500 anti-Semitic attacks in the country last year, a 74 percent increase from 2017.

“Some people are provoking the authority of the state. It needs to be dealt with now and extremely firmly,” Sarkozy told reporters. “It’s a real question of authority. Violence is spreading and it needs to stop now.”

Among incidents in recent days, “yellow vest” protesters were filmed hurling abuse on Saturday at Alain Finkielkraut, a well-known Jewish writer and son of a Holocaust survivor.

Artwork on two Paris post boxes showing the image of Simone Veil, a Holocaust survivor and former magistrate, was defaced with swastikas, while a bagel shop was sprayed with the word “Juden”, German for Jews, in yellow letters. A tree in a Paris suburb in memory of Ilan Halimi, a young Jewish man kidnapped, tortured and murdered in 2006, was cut in two. 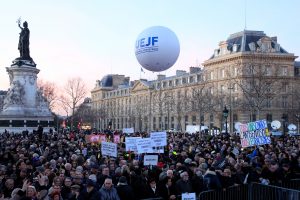 People attend a national gathering to protest antisemitism and the rise of anti-Semitic attacks in the Place de la Republique in Paris, France, February 19, 2019. REUTERS/Gonzalo Fuentes

The series of attacks has alarmed politicians and prompted calls for action against what some commentators describe as a new form of anti-Semitism among the far-left and Islamist preachers.

“I call on all French and European leaders to take a strong stand against anti-Semitism,” Israeli Prime Minister Benjamin Netanyahu said in a video message recorded in Hebrew. “It is an epidemic that endangers everyone, not just us.”

A rabbi and three children were killed at a Jewish school in Toulouse in 2012 by an Islamist gunman, and in 2015 four Jews at a kosher supermarket in Paris were among 17 people killed by Islamist militants.

(Additional reporting by Gilbert Reilhac in Strasbourg and Mayaan Lubell in Jerusalem; Writing by Luke Baker and John Irish; Editing by Gareth Jones and Frances Kerry)