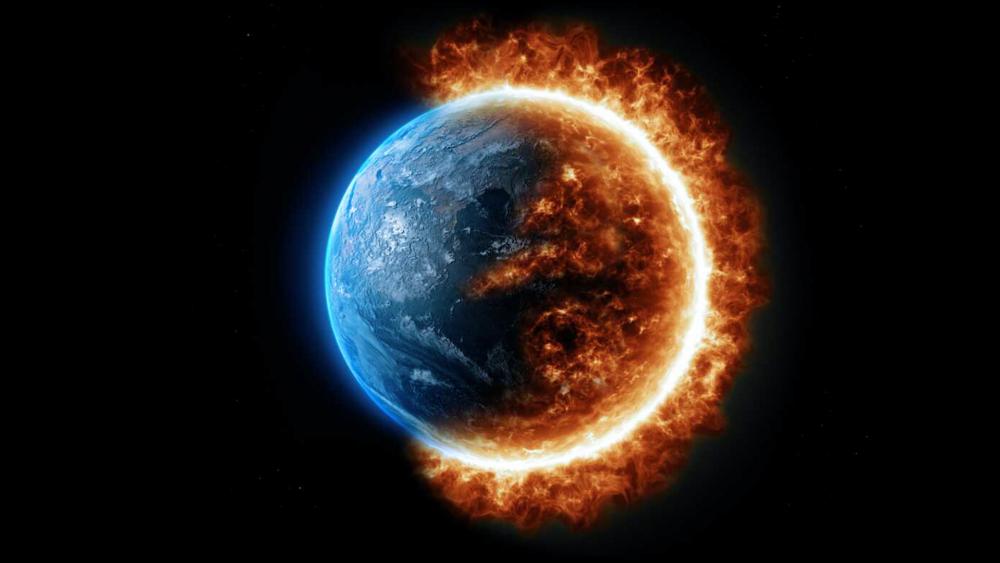 Revelation 13:2-4 “2 And the beast that I saw was like a leopard; its feet were like a bear’s, and its mouth was like a lion’s mouth. And to it the dragon gave his power and his throne and great authority. 3 One of its heads seemed to have a mortal wound, but its mortal wound was healed, and the whole earth marveled as they followed the beast. 4 And they worshiped the dragon, for he had given his authority to the beast, and they worshiped the beast, saying, “Who is like the beast, and who can fight against it?”

Pastor Jim and Lori Bakker welcome special guests Tom Horn, and Derek and Sharon Gilbert as they discuss current events and they will effect the coming of the antichrist.  END_OF_DOCUMENT_TOKEN_TO_BE_REPLACED

For some time the world has been moving toward a cashless society. Soon, we are told, even checks will be a part of our economic history as more and more transactions will be done electronically. You know how this works; you probably pay many of your monthly bills now without ever taking a dollar out of your wallet or writing a check. Your computer is set to make the transaction for you in the right amount and on the proper date. It’s easy and convenient. After all, you could lose cash or misplace the checks. Even credit cards will soon be history. With increasing threats of identity theft, the world will be ready and willing to accept some way of maintaining control. All of your per­sonal information, from your bank accounts to your medical records, will be computerized and stored online, perhaps in the cyberspace “cloud.” END_OF_DOCUMENT_TOKEN_TO_BE_REPLACED

He will also use deceptive signs, and he will be able to perform miracles in his efforts to win people’s allegiance to his boss (13:12–15). This is one reason why I so adamantly caution Christians not to be so enamored with miracles. Some Christians run from church to church, town after town, in search of the next big spiritual flash. Yes, our God does indeed do miracles. But be careful. Not every miracle comes from God! In ancient times, false prophets were able to perform miracles, whether real or through some form of chicanery, and in our time, we’ve seen our share of charlatans.

Now, John warned us that the False Prophet is going to wow people with miracles and “great signs,” even making fire come down out of heaven, as the prophet Elijah did and as the two witnesses to come will do in Jerusalem. Many people will be deceived by the False Prophet. This is the spirit of devils working miracles (16:14).

Although he may look and sound like a lamb, the antichrist’s beastly cohort is devious. He will establish a false religion, bringing all the world’s religions together and forming an umbrella religion designed to worship the antichrist (13:14–15), an eclectic, inclusive, tolerant religion. The only religious beliefs that will not be tolerated will be biblical Christianity. Can you not see that this is beginning to happen in the U.S. and throughout the world? END_OF_DOCUMENT_TOKEN_TO_BE_REPLACED

The antichrist will speak powerful, blasphemous words, just as the prophet Daniel predicted (Daniel 7:8, 20, 25). Through his speech, the antichrist will blaspheme God, His name, His tabernacle (which is in heaven), and His people who dwell in heaven with Him (Revelation 13:6). These blasphemies will go on for forty-two months (three and a half years).

Before long, however, the world’s acquiescence at the antichrist’s words will no longer satisfy his ego. Consequently, he will launch a war against God’s people, the saints, the true believers (13:7–8). For a while the antichrist is going to appear victorious, defeating even God’s people (v. 7). I believe many sincere believers in Jesus will be persecuted for their faith at that time. Many will die as a result of the antichrist’s war. But if there is an outcry from the world at his abuse, it will be quickly muffled, since he will have authority over the entire world.

We know for sure that John wanted us to pay close attention to this part of his vision. He made the statement, “If anyone has an ear, let him hear” (13:9), similar to the admonitions of Jesus in the earlier letters to the churches. John then offered an unusual observation: “If you are to be a prisoner, then you will be a prisoner.  If you are to be killed with the sword, then you will be killed with the sword. This means that God’s holy people must have patience and faith” (13:10, ncv). END_OF_DOCUMENT_TOKEN_TO_BE_REPLACED

Many teachers of Bible prophecy believe that the antichrist himself will suffer a fatal head wound, but if you look at the scripture carefully, you can easily get a different impression: “One of the heads of the beast seemed to have had a fatal wound, but the fatal wound had been healed” (13:3, niv).

Remember, John saw the Beast rising out of the sea, which probably means rising from many peoples. But John used the term “beast” in several ways in Revelation, sometimes talking about the antichrist and at other times talking about the antichrist system, the one-world government system that is against God. Here, I believe the latter is the more correct understanding, that is, this beast is the antichrist system. This one-world government will have ten horns, seven heads, and ten diadems (13:1).

Revelation 17:12–13 tells us that the ten horns are ten kings who will receive power with the Beast for a relatively short time, and their sole purpose is to give their power to the Beast. The seven heads, according to Revelation 17:9–10, are seven mountains on which the harlot rides and seven kings: “Five have fallen, one is, the other has not yet come; and when he comes, he must remain a little while.” END_OF_DOCUMENT_TOKEN_TO_BE_REPLACED

All three anticipate war, chaos, and suffering on epic levels prior to the arrival of key figures in their faiths. Is it possible they could be the same war either partially or in totality?

John’s description of this beast is horrifying, but as we’ve seen before, these descriptions have symbolic meanings. For instance, the Beast will have seven heads and ten horns; the heads most likely represent seven world empires and the horns indicate power. Seven usually means completeness in the Bible, so this evil beast will literally rule the world. The ten horns represent ten lesser rulers who will be associated with him, out of which the antichrist will emerge. The ten crowns—diadems—represent absolute power. According to Daniel 7:24, the antichrist will subdue three of these kings, so he can rule unchallenged. Whatever else this description of the Beast entails, it indicates a person with tremendous international power.

On the Beast’s head are “blasphemous names.” In John’s time, the Roman emperors had taken such titles as Dominus and Kurios, both meaning “Lord” in Latin and Greek, respectively. During the reign of Nero, coins bore his image along with the inscription, “The Savior of the World.” John said that this will happen again under the antichrist. END_OF_DOCUMENT_TOKEN_TO_BE_REPLACED

Satan attempts to counterfeit all the good things God has provided, so we should not be surprised that just as there is a Trinity of Father, Son, and Holy Spirit, the Enemy has a trinity as well. The players in this evil threesome are Satan (the Dragon), the Beast (the antichrist), and a second beast (the False Prophet). This second beast is a public relations man of sorts who causes the world to worship the Beast and Satan. They are intent on ruling the world, and for a time, it looks as if the devil and his demon-possessed puppets will succeed. But then Jesus Christ returns—and the devil and his motley crew receive everything they deserve.

You will be rewarded and will reign forever with Jesus in a new heaven and a new earth. That’s where we are going, but the going gets extremely rough between now and then.

John saw the antichrist, a world leader who rises to power because of his great oratory skills and his winsome charisma. He will promise people everything they want to hear, but he will ultimately lead them into bondage and death. END_OF_DOCUMENT_TOKEN_TO_BE_REPLACED

Many first-century believers—including, no doubt, the Apostle John—expected Jesus to return within their lifetime. When He didn’t, some people became disillusioned and discouraged. They did not understand that certain things had to happen in history before Christ’s return. For instance, according to Jesus’ own words, Jerusalem had to be under Jewish control before the end-times events begin to happen. That did not occur until 1948, when the nation of Israel was re-established, and Jerusalem once again came under the governance of the Jewish people, though both Christianity and Islam have sacred sites there.  Consequently, most, if not all, of the prophecies recorded in Revelation, can easily be fulfilled in our generation. Now, when the prophetic mysteries begin to unfold, they will occur in rapid succession. That’s why you need to have your heart right and your house in order now, ready today for the return of Jesus Christ.

At the same time, the Apostle Paul warned that “the day of Christ,” including the Lord’s climactic return, would not happen until the “man of sin” is revealed.  This is the Antichrist who “takes his seat in the temple of God, displaying himself as being God.”

If the Antichrist is going to be on the rise, wisdom says we should prepare to go through some difficult days before the Lord’s return. I know you are hoping that Jesus will come prior to the tribulation period, and so am I.  But what if you are living right where you are today when the “four horsemen of Revelation” begin to ride, when unprecedented natural disasters strike the world, and when the Antichrist appears?  What will you do? Will you even understand the significance of these developments? All of these things and more are definitely going to happen; the only question is when.

Excerpt from Time Has Come