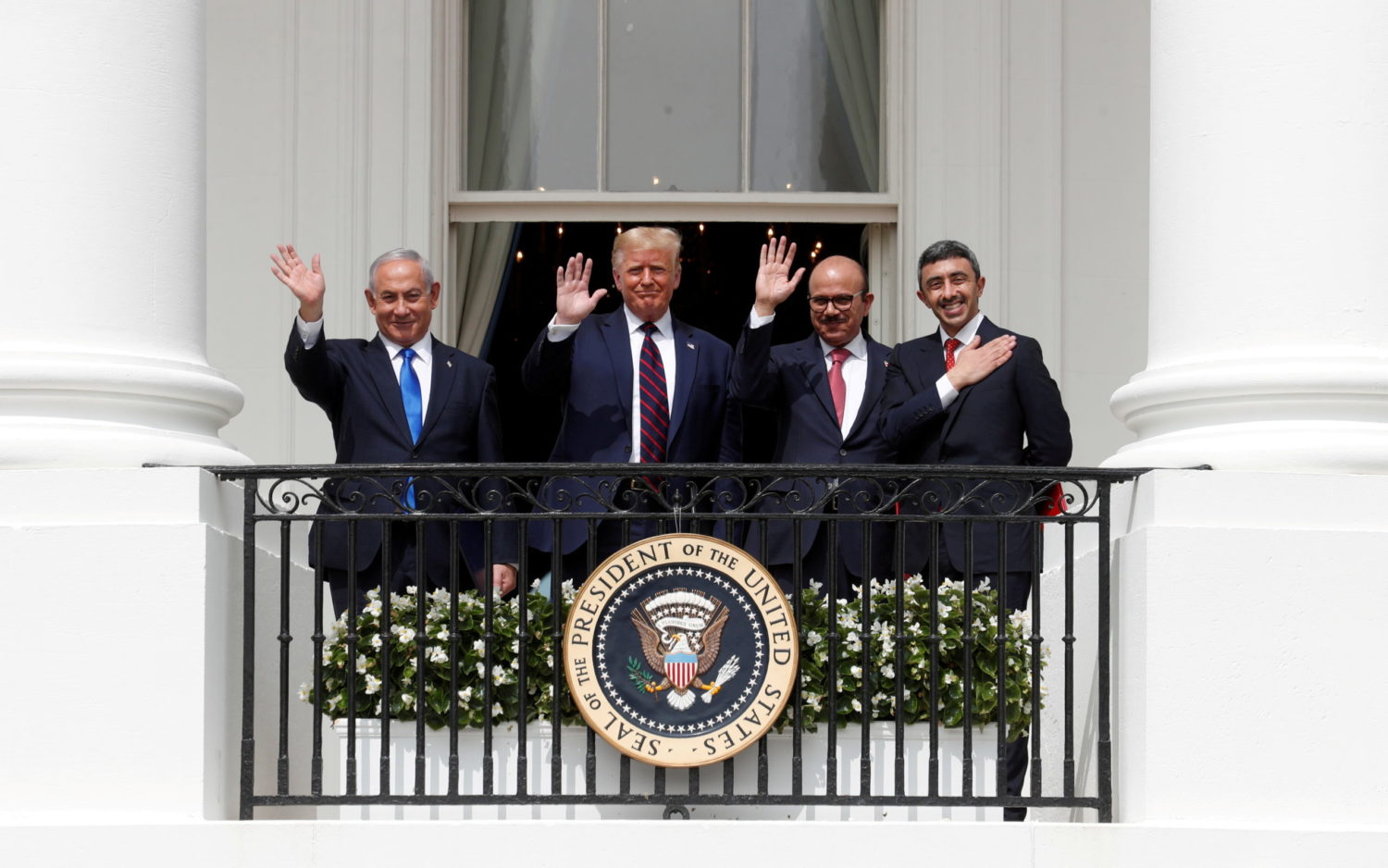 By Maayan Lubell and Rami Ayyub

But in the Palestinian territories, no U.S. president was openly reviled as much as Trump, or depicted in such unflattering terms in portraits and effigies across the Gaza Strip and the occupied West Bank.

In four years, Trump overturned decades of U.S. policy in the Middle East. Joe Biden will want to undo many of those changes during his presidency, but his freedom for maneuver will be limited.

At his Senate confirmation hearing on Tuesday, Biden’s choice for secretary of state, Antony Blinken, signaled that countering Iran would be central to Biden’s Middle East agenda.

Biden and his team have said they will restore ties with the Palestinians that were cut by Trump, resume aid and reject unilateral actions, such as construction of Israeli settlements on occupied territory.

But Blinken said the U.S. embassy in Israel would remain in Jerusalem, which Trump recognized as Israel’s capital.

Four Trump-brokered diplomatic deals between Israel and Arab states are also likely to remain – they have bipartisan support in Washington and brought a strategic realignment of Middle East countries against Iran.

So too is Trump’s acceptance of Israeli sovereignty over the occupied Golan Heights, which Israel captured from Syria in a 1967 war and annexed in a move not recognized internationally.

Biden’s challenge will be how to walk back not just Trump-era policy – and the polarization triggered by the man who said he had “done a lot for Israel” – without being accused of retreating altogether from the Israeli-Palestinian conflict.

“He will try to project an image of fairness and balance,” Michele Dunne, Director of the Middle East Program at the U.S. based Carnegie Endowment for International Peace, told Reuters.

“There is no question that Biden’s policies towards the Middle East will be quite different from those of Trump; the question is how different they will be from those of (former President Barack) Obama… I doubt that Biden sees the conflict as ripe for U.S. diplomacy right now.”

Trump was broadly in lockstep on Middle East policy with his closest ally in the region, Israeli Prime Minister Benjamin Netanyahu.

As well as recognizing Jerusalem as Israel’s capital and Israeli sovereignty over the Golan Heights, Trump backed Israeli settlements in the West Bank, territory that the Palestinians seek for a state.

Israel’s investment in its West Bank settlements between 2017-2019 increased by almost half against the last three years in office of Obama, according to official Israeli data provided to the U.S. State Department and seen by Reuters.

One day before Biden’s inauguration, Israel issued tenders for more than 2,500 settlement homes in the occupied West Bank and East Jerusalem, on top of hundreds more announced by Netanyahu last week.

Relations with the Palestinians reached a new low after Trump cut off $360 million annual funding to UNRWA, the United Nations agency dealing with Palestinian refugees, reduced other aid to the Palestinians and shuttered the Palestine Liberation Organization office in Washington D.C.

“The only way to ensure Israel’s future as a Jewish, democratic state and to give the Palestinians a state to which they are entitled is through the so-called two-state solution,” Blinken said.

But he added: “Realistically it’s hard to see near-term prospects for moving forward on that.”

In Gaza, UNRWA Commissioner-General Philippe Lazzarini was optimistic of change, and that things might ease up for the Palestinian refugees that his agency cares for.

“We indeed have informal contact with the incoming new administration. We heard all the messages we are receiving that there are intentions to resume the partnership,” he told Reuters.

For many Israelis, the Trump brand has not been tarnished by the Capitol Hill riot on Jan. 6.

In Trump Heights, a tiny Golan Heights settlement, work is underway to house 20 new families who will move in by the summer. A giant black and gold sign at the gate has been restored after vandals stole the ‘T’.

“We are keeping the name Trump Heights, we are proud of the name. President Trump deserves gratitude for all the good deeds he did for us,” Golan Regional Council Head Haim Rokach told Reuters.

An Israeli cabinet minister this week reaffirmed his support for Trump’s name to adorn a future train terminus near Jerusalem’s Western Wall, and at Trump Square roundabout in Petah Tikva he remains popular. “We will miss him,” said Alon Sender. “He was good for Israel.” 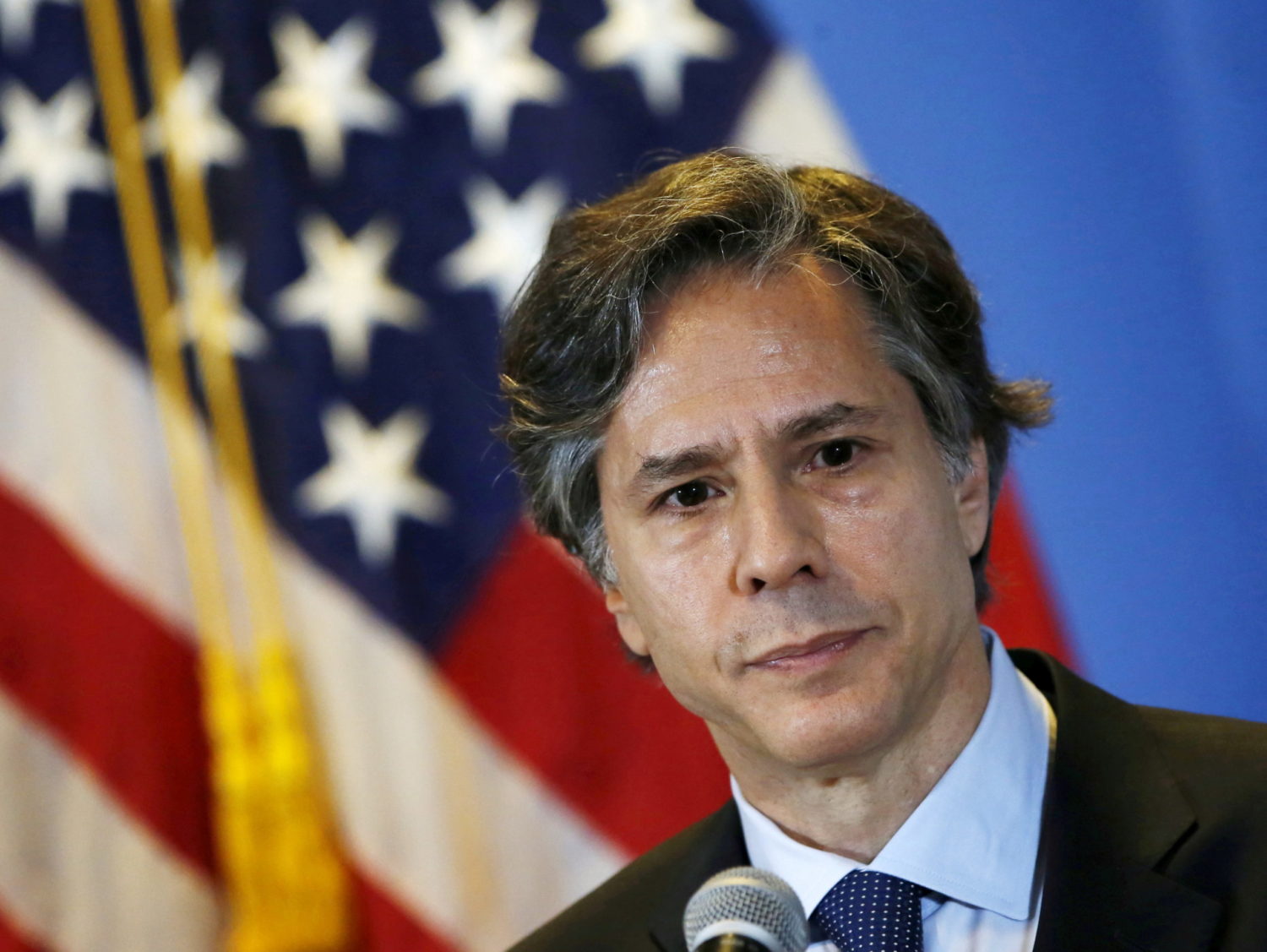 By Matt Spetalnick and Trevor Hunnicutt

NEW YORK/WILMINGTON, Del. (Reuters) – Joe Biden will pick Antony Blinken as U.S. secretary of state, a person close to the president-elect’s transition said on Sunday, elevating one of his most seasoned and trusted aides as he prepares to undo President Donald Trump’s foreign policy.

Blinken is a longtime Biden confidant who served as No. 2 at the State Department and as deputy national security adviser in President Barack Obama’s administration, in which Biden served as vice president.

A second Biden ally said that Blinken was Biden’s first choice. An announcement is likely on Tuesday.

While neither are household names, Blinken and Sullivan have helped Biden formulate a strategy that will include immediate outreach to U.S. allies who have often been antagonized by Trump’s “America First” approach, and to demonstrate a willingness to work together on major global problems like the coronavirus epidemic and its economic fallout.

Biden has vowed to rejoin a nuclear deal with Iran if the country returns to compliance, return to the Paris climate accord, abandon plans to leave the World Health Organization and end a U.S. rule that bans funding of aid groups that discuss abortion. Each move would reverse Trump’s policies and some could take place quickly after Biden takes office on Jan. 20.

Biden is also likely to name Linda Thomas-Greenfield as U.S. ambassador to the United Nations, media outlets reported on Sunday. Thomas-Greenfield is Black, an expert on Africa policy and held a top diplomatic post in the administration of former President Barack Obama.

Blinken, 58, has long touted the view that the United States needs to take an active leadership role in the world, engaging with allies, or see that role filled by countries like China with contrary interests.

“As much of a burden as it sometimes seems to play … the alternative in terms of our interests and the lives of Americans are much worse,” he said in an interview with Reuters in October.

When asked if relations with the United States might improve with Blinken replacing Mike Pompeo, Chinese Foreign Ministry spokesman Zhao Lijian sidestepped the question by saying he does not comment on U.S. domestic affairs.​

He reiterated that China was willing to improve communication, strengthen cooperation and manage differences with the United States.

People familiar with his management style describe Blinken as a “diplomat’s diplomat,” deliberative and relatively soft-spoken, but well-versed in the nuts and bolts of foreign policy.

After Democratic presidential nominee Hillary Clinton lost the 2016 election to Trump, Blinken became one of the founders of WestExec Advisors, a Washington consultancy advising corporations on geopolitical risks.

He joined Democratic President Bill Clinton’s White House as a speechwriter and became one of his national security aides.

Under Obama, Blinken worked to limit most U.S. combat deployments to small numbers of troops. But he told Reuters last year that Trump had “gutted American credibility” with his pullback of U.S. troops in Syria in 2019 that left Kurdish U.S. allies in the lurch in their fight against Islamic State.

On the campaign trail, Blinken was one of Biden’s closest advisers, even on issues that went beyond foreign policy.

That trust is the product of the years Blinken worked alongside Biden as an adviser to his unsuccessful 2008 presidential campaign, as national security adviser early in his vice presidency and as the Democratic staff director of the Senate Foreign Relations Committee when Biden was chair.

Sullivan, formerly a close policy aide to Hillary Clinton, became one of the key policy advisers to Biden. He served as the former vice president’s national security adviser during the Obama administration.

A 43-year-old graduate of Yale, who was also a Rhodes scholar at Oxford and has a reputation as a behind-the-scenes operator, Sullivan took part in secret back channel talks with Iran that led to a 2015 international nuclear deal that Trump subsequently overturned.

He took on a broad portfolio on foreign and domestic policy, including the campaign’s views on the public health and economic response to the coronavirus pandemic, and was quickly chosen to stay on with Biden through the transition.