A docu-drama based on the best seller Four Blood Moons is being produced to hit theaters by March.

The book and now movie will show how that “Scripture, science and history tie together.”  The movie will be in theaters for one night only, March 23, between a total solar eclipse and a total lunar eclipse.

“The heavens are ‘God’s billboard.’ He’s been sending signals to Earth, and we haven’t been picking them up,” Hagee is quoted as saying in a press release on the new movie. “Two blood moons, in 2014 and 2015, point to dramatic events in the Middle East and, as a result, changes in the whole world.”

Hagee notes that four consecutive lunar eclipses have fallen on Passover and Sukkot only three times in the last 500 years.

A press release for the film states:

“”Four Blood Moons” combines scripture, science, history and big-screen live action spanning centuries, including previous similar lunar occurrences and the earth-shaking changes around them. It also examines our four blood-moon cycle-and its possible meaning for Israel, the Middle East and the world.

An array of historians, religious scholars and commentators appear in “Four Blood Moons” and offer their insight-filmmaker, speaker and author Dinesh D’Souza; radio host and author Dennis Prager; and noted author and historian David Barton to name just a few.”

The previous instances of consecutive eclipses on Jewish holy days have happened the same time as the founding of Israel in 1948-49 and Jerusalem rejoining the state of Israel.

A popular dating site for Christians doesn’t seem like it would be the best thing for a full-length feature film but actor/director Corbin Bernsen doesn’t agree.  He is making Christian Mingle the centerpiece of a film about faith, love and life.

The movie is about a woman in her 30s who has a great career and all the material perks of life but is unlucky in love.  Desperate to find a man, she signs up for Christian Mingle despite the fact she is not a Christian.

Along the way she finds love with a man…and realizes that she needs the true love that only comes from a relationship with Christ.

Bernsen said that despite the tie-in with the website, the movie is not a full-length commercial for Christian Mingle.

“They have been incredible partners and friends in allowing us to use their name and play an integral role in the film, but one of the first rumors I want you to help me dispel is that this is a commercial for them,” he wrote on his Facebook page.

Bernsen has been focusing in recent years in directing and producing movies with a Christian message.

An independent Christian film shocked Hollywood observers over the weekend when it debuted in the top 5 for earnings despite being shown in less than 1,000 theaters.

God’s Not Dead, a low-budget production that shows a college student accepting an atheist professor’s challenge to provide a defense for the existence of God, was shown on only 780 screens last weekend but earned $9.2 million in the first three days to finish in 4th place according to the Hollywood news site deadline.com.

The film is the 7th all-time grossing Christian film on its opening weekend, ahead of Fireproof’s $6.8 million.

The movie had a boost from appearances by Willie and Korie Roberston of Duck Dynasty who said their participation in the film strengthened their faith in Christ.

The film’s distributor is attempting to put the movie into more theaters this coming weekend.

One of the stars of the hit reality show “Duck Dynasty” who appears in the upcoming Christian film “God’s Not Dead” is speaking out for Christians to stand up against the bullies who are trying to silence them.

“Don’t let someone bully you into not standing up for your beliefs,” Robertson said on Fox News’ “Faith & Fame.”

Robertson commented that with the success of their show, they have had to deal with thousands of angry people who have been trying to keep them from sharing their faith in Christ on the show.  They have even had to stand up to the network that airs them, A&E, demanding they leave in the show segments where they pray, read Scripture or talk about their faith in Jesus.

“God and our faith is what sustains us,” Robertson said. “It’s what makes our life good.”

Robertson and her husband Willie have said their participation in the new movie “God’s Not Dead” has really strengthened their faith.  They play themselves defending their faith to a reporter questioning Christianity.  The movie follows a student who accepts a professor’s challenge to prove the existence of God. 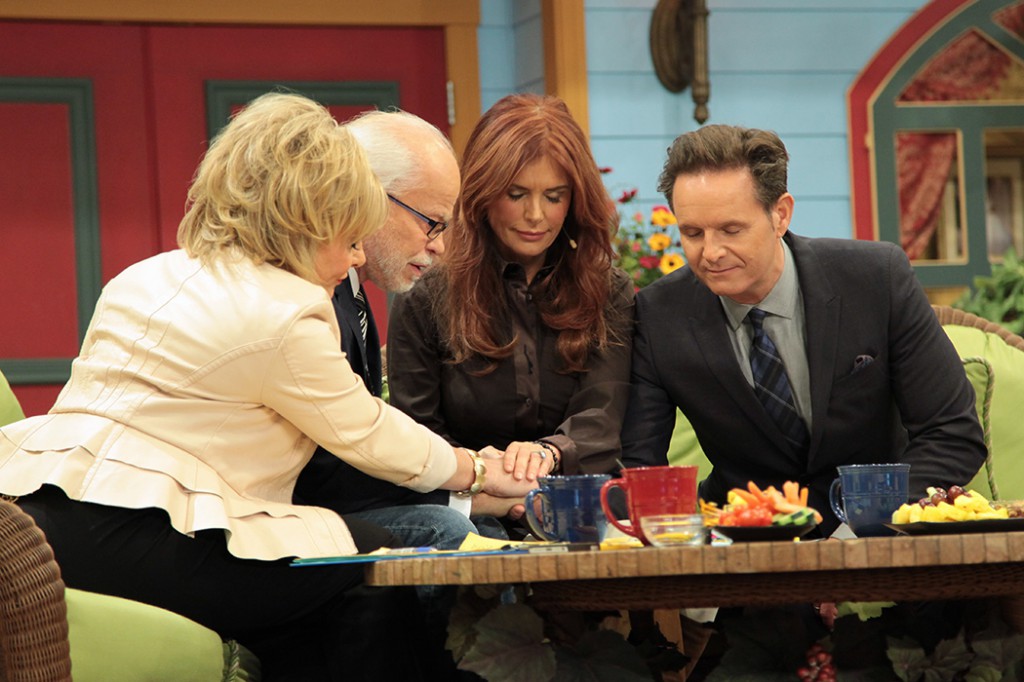 One of the greatest things about being on the air is the opportunity we have to bring you exceptional guests.  On a recent broadcast, we had the privilege of hosting Roma Downey (Touched by an Angel) and Mark Burnett (Producer of The Voice, Survivor, and many others) when they came to tell us about their new movie, SON OF GOD.  Our family had a chance to preview this amazing film with Roma and Mark and I have to say that I have never seen a more beautiful depiction of the life of Christ in such a sweeping, epic production.  We were awestruck and captivated as we watched.  The impact of this amazing film cannot be overstated.  This larger-than-life movie portrays the story of Jesus’ life, death and resurrection in the New Testament featuring powerful performances, exotic locales, dazzling visual effects and a rich orchestral score from Oscar winner Hans Zimmer.

It’s not often that I’m starstruck, but I can truly say that having Roma Downey and Mark Burnett on the show was one of the all-time highlights of my life.  These are warm and loving people, relatable in every way.  Even so, when I first met them, I was like a nervous school kid!  But they were quick to put all of us at ease and we had a great time talking about the Lord and their new movie. END_OF_DOCUMENT_TOKEN_TO_BE_REPLACED

Actress Roma Downey is calling her new movie Son of God an “epic, sweeping” reminder to the world of God’s love.

Downey and her husband, revolutionary Hollywood producer Mark Burnett, have produced the Bible epic scheduled to be released in theaters on February 28th.

“We hope the audiences leave theatres feeling they know Jesus more and also they are reminded of how deeply he loved us,” Downey said.  “This is a big, epic sweeping film.  An exciting movie and sometimes a tense movie with intense drama and real danger.”

Downey and Burnett shocked Hollywood observers with their miniseries “The Bible” which had 13.1 million viewers for its premiere.  The sequel to “The Bible,” titled “A.D.” and will follow the events immediately after Jesus’ ascension, has been given the green light by NBC.

Downey and Burnett credit their Hollywood success for opening doors to produce movies about their faith.

“It all comes back to people in the industry realizing that we know what we’re doing and allowing us to make this show and now our movie about our faith,” Burnett said.

The Academy of Motion Picture Arts and Sciences has taken away an Oscar nomination from an independent Christian film following outrage from Oscar watchers and industry members.

The Academy claims that a former member of the board of Governors who sits on the Academy’s music branch’s executive committee violated rules against lobbying by e-mailing members of the music branch about the song during the nomination period.

The film had made a small run in Los Angeles to allow it to qualify for Oscar consideration before going into wider release next year.  The tactic is very common for smaller films and was used this year for Hayao Miyazaki’s “The Wind Rises” to get a nomination for Best Animated Feature.

The nomination was first attacked by critics who tried to disqualify the song claiming the movie did not purchase advertisements for the run of the movie in Los Angeles.  The Academy ruled in that case the show times published in the newspapers of the area qualified as meeting the advertising requirement.

The Academy has not previously taken action against someone sending an e-mail to members asking them to nominate a song for Oscar consideration.