Pastor Jim Bakker welcomes special guest Mark Biltz as they discuss the importance of paying attention to God’s calendar and the signs of end times in the world today.
END_OF_DOCUMENT_TOKEN_TO_BE_REPLACED

Pastor Jim Bakker welcomes special guest Mark Biltz as they discuss the importance of paying attention to God’s calendar and the signs of end times in the world today.
END_OF_DOCUMENT_TOKEN_TO_BE_REPLACED

What was already going to be a rare event with the closing of the blood moon tetrad, has turned into an even rarer occasion as stargazers will not only see a lunar eclipse but also see a supermoon on Sunday night.

A supermoon is when the moon is at its closest approach to Earth in its normal orbit. It will appear 14% bigger and 30% brighter and is approximately 31,000 miles closer to Earth. A normal total lunar eclipse occurs when the sun, Earth, and the moon align, causing the moon to completely be in Earth’s shadow. According to NASA, having both a total lunar eclipse and a supermoon occur means that the moon will be at its darkest and its brightest in 2015.

While normal lunar eclipses can be seen about every 2.5 years, a super moon and lunar eclipse combination hasn’t been seen in 33 years, and another won’t occur until 2033.

According to Nature World Report, the best time to enjoy a full supermoon is shortly after the moon rises above the horizon. On September 27, at approximately 8:11 p.m. Eastern Time (EDT), the moon will begin to dim from the eclipse. NASA officials report the total eclipse will start at 10:11 p.m. EDT and it will last 72 minutes. Those in North America, South America, Europe, Africa, western Asia, and eastern Pacific Ocean regions will be able to see the eclipse.

No equipment will be needed to view Sunday’s astronomical event. Experts have reported that everything will be able to be seen with the naked eye.

A docu-drama based on the best seller Four Blood Moons is being produced to hit theaters by March.

The book and now movie will show how that “Scripture, science and history tie together.”  The movie will be in theaters for one night only, March 23, between a total solar eclipse and a total lunar eclipse.

“The heavens are ‘God’s billboard.’ He’s been sending signals to Earth, and we haven’t been picking them up,” Hagee is quoted as saying in a press release on the new movie. “Two blood moons, in 2014 and 2015, point to dramatic events in the Middle East and, as a result, changes in the whole world.”

Hagee notes that four consecutive lunar eclipses have fallen on Passover and Sukkot only three times in the last 500 years.

A press release for the film states:

“”Four Blood Moons” combines scripture, science, history and big-screen live action spanning centuries, including previous similar lunar occurrences and the earth-shaking changes around them. It also examines our four blood-moon cycle-and its possible meaning for Israel, the Middle East and the world.

An array of historians, religious scholars and commentators appear in “Four Blood Moons” and offer their insight-filmmaker, speaker and author Dinesh D’Souza; radio host and author Dennis Prager; and noted author and historian David Barton to name just a few.”

The previous instances of consecutive eclipses on Jewish holy days have happened the same time as the founding of Israel in 1948-49 and Jerusalem rejoining the state of Israel.

What an amazing year this has been! Just watching the world’s events unfold in the news is almost beyond the mind’s ability to comprehend. Do we really grasp that we are racing towards the complete fulfillment of ancient prophecies at break-neck speed?  Biblical prophecies written in amazing detail and shrouded in mystery for a time are now being revealed. What was once cloudy is now clear – what was once a mystery is now revealed – what once felt so far off is now at the door. END_OF_DOCUMENT_TOKEN_TO_BE_REPLACED

I sat on the set recently with John Shorey, a dear friend whom I believe God has anointed with a clear message for the Last Days. John has heard from God in many instances, and what he hears, he shares with us and our television audience which could number in the millions. I don’t take it lightly that these prophetic messages are being given on our show – because God told me to provide the platform for the prophets to speak to the people in the Last Days and that’s what I’m doing. END_OF_DOCUMENT_TOKEN_TO_BE_REPLACED

The Bible tells us that if we do what God says, we will be a nation that will lend and not borrow. The Bible says that! And if we disobey God and rebel, we will be a debtor.

Guess what? We are the number one debtor nation in the world! But because we are not studying those Scriptures, we don’t realize that America is under judgment. And the only way we can change it, [the Bible] says “If my people will humble themselves and pray, turn, He says I’ll hear in heaven and heal their land.

The thing I keep saying is one day, I will say it on TV; “Order your food today,” and, that will be the last time I will ever be able to say it. And, the food will all be gone. And, those who have it, then they will have life at least a little simpler than having to go out and find food somewhere. END_OF_DOCUMENT_TOKEN_TO_BE_REPLACED 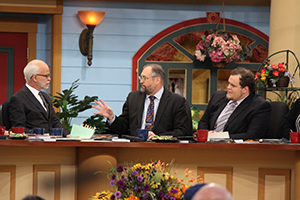 Pastor Jim & Lori Bakker welcome Mark Biltz as they discuss the prophecy of the Blood Moons for Day 5 on The Jim Bakker Show. END_OF_DOCUMENT_TOKEN_TO_BE_REPLACED 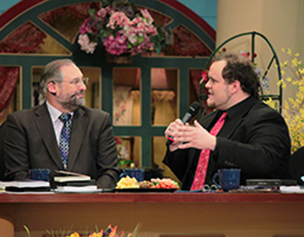 Pastor Jim & Lori Bakker welcome Mark Biltz as they discuss the prophecy of the Blood Moons for Day 2 on The Jim Bakker Show.  END_OF_DOCUMENT_TOKEN_TO_BE_REPLACED