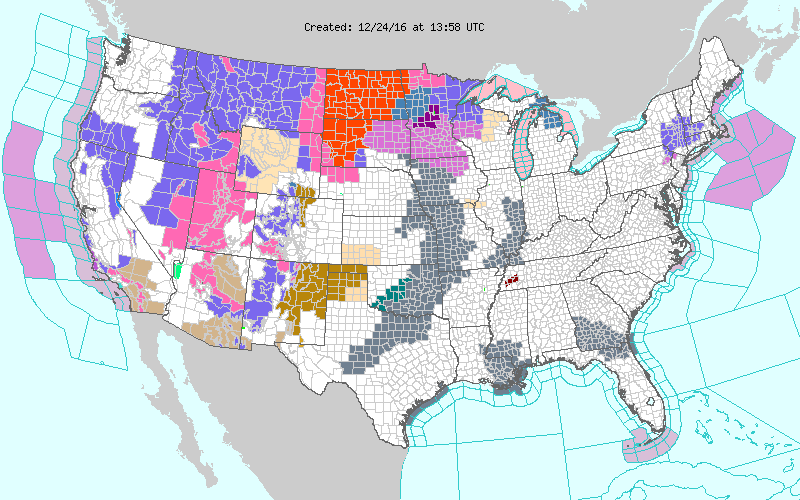 A storm is expected to bring rain and then snow to the Pacific Northwest as temperatures hover around freezing on Friday night.

The same system will also dump heavy snow in the Rockies and High Plains late into Saturday, the National Weather Service said in its forecast.

Snow and freezing rain are also in the forecast for much of the Midwest and Northeast late on Friday and through Saturday as temperatures are to dip around freezing, the weather service said.

The deteriorating weather may derail travel plans for some of the 94 million Americans who the American Automobile Association say will hit the roads during the holidays.

“Christmas, for travelers, is going to be a little dicey in some portions of the country,” meteorologist Justin Povick said during his forecast on Accuweather.com.

Accuweather warns that blizzard conditions in the northern Plains over the weekend could cause treacherous white-outs along major interstate highways, power outages and airline delays.

Signs of how bad weather may cause disruptions for holiday travelers were seen as early as Thursday morning as nearly 250 flights were delayed or canceled in and out Los Angeles International Airport due to high winds and high volume.

A blizzard watch is in effect for the area around Bismarck, North Dakota, where as much as a foot (30 cm) of snow fall and heavy winds will lead to “dangerous Christmas travel conditions,” the National Weather Service said.

To the east, in northern Wisconsin and Michigan, motorists are told to “exercise caution” as snow and freezing drizzle are expected to limit visibility and make roads slick, the National Weather Service said.

Tornadoes, thunderstorms and hail are also in the forecast in the southern U.S. Plains, Accuweather said.

As their neighbors to the north deal with winter weather, people in southern Missouri, Kentucky and Tennessee will enjoy unseasonably warm weather on Christmas Day as temperatures are likely to soar into the 60s, according to the National Weather Service. 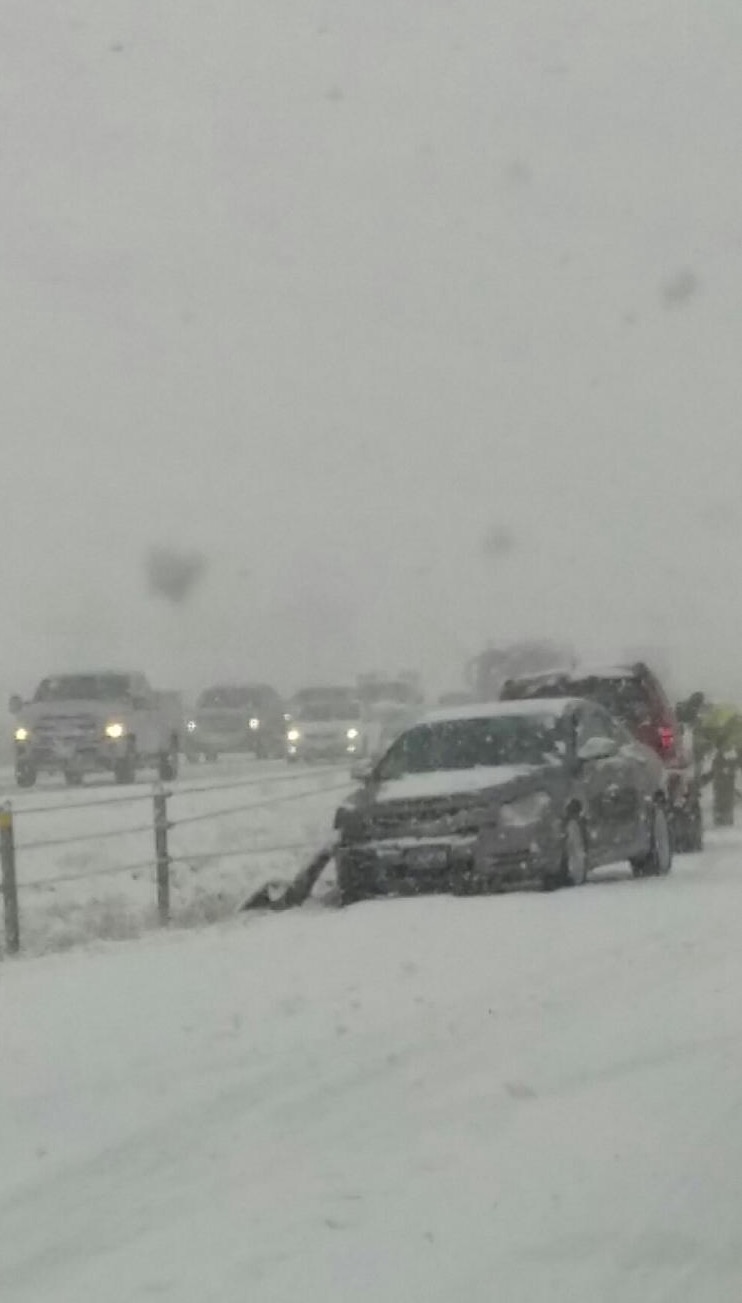 Severe weather was impacting the holiday travel plans of many Americans on Thursday morning, and threatening to impact more.

The remnants of the storm system that produced Wednesday’s deadly tornado outbreak were moving across the southeastern United States on Thursday. The National Weather Service said the system had weakened considerably, but it was still capable of producing heavy rainfall and localized severe thunderstorms throughout the Mid-Atlantic and Gulf Coast. The storms were expected to be the worst in Alabama and Georgia, but rain was falling as far north as New Jersey.

According to flight monitoring website FlightAware.com, 201 flights to or from United States destinations were cancelled as of 11:45 a.m. EST on Thursday morning. Another 1,720 were delayed. Both of those numbers had steadily risen throughout the morning.

A large percentage of the delays were the result of heavy storms at Hartsfield-Jackson International Airport, the world’s busiest airport in terms of passenger traffic. FlightAware indicated 111 flights to or from the airport had been cancelled, and another 703 were delayed.

More Americans than ever before are expected to travel this Christmas season. AAA projects that 100.5 million Americans were expected to make a journey of at least 50 miles in the 12-day period that began Wednesday morning. More than 90 percent of people were expected to drive to their destinations, but 5.8 million were expected to fly. That’s an increase of .7 percent over last year, AAA reported.

Regardless of whether they were traveling or not, there’s a good chance Americans would experience record temperatures on Christmas. The National Climate Data Center reported that there have been 3,912 record daily high temperatures this month, and that trend was expected to continue Christmas Eve and Christmas Day.

The Weather Channel reported temperatures in New York City reached 70 degrees early Christmas Eve morning, smashing the previous record of 63 degrees. The forecast was calling for a high of 64 degrees on Christmas, which would tie a 33-year-old record.

Still, some Western parts of the country were expected to see a White Christmas as Winter Storm Goliath arrived Thursday and continued to dump snow throughout Christmas and well into next week.

The National Weather Service had issued winter storm warnings in northern and central California, southeastern Oregon, northern Idaho, eastern Utah and western Colorado. The service had also issued winter weather advisories in parts of those states, as well as Washington, Arizona, Montana and Nevada. The service was also warning of the possibility of avalanches in Idaho, Utah and Colorado.

The Weather Channel reported that the storm could bring more than a foot of snow to higher elevations by Saturday night, though most of the affected areas are expected to see fewer than five inches. However, the channel’s meteorologists say the storm may intensify over the weekend, and early projections show that Goliath could dump up to a foot of snow over the Great Plains before next Tuesday.

According to a blog post on NASA’s website, the 2003 SD220 asteroid will be about 6.7 million miles away from Earth when it passes by later this month. That’s 28 times the distance between the Earth and the moon. NASA says it will be able to use radar to determine the object’s mass, as well as perform other scientific studies, but the asteroid isn’t expected to be any danger to Earth.

Over the summer, rumors swirled on the Internet saying that an asteroid was going to impact earth some time in September. In a statement at the time, NASA said every known comet and potentially hazardous asteroid has a less than .01 percent chance of hitting Earth before 2115.

“There is no existing evidence that an asteroid or any other celestial object is on a trajectory that will impact Earth,” Paul Chodas, who heads NASA’s Near-Earth Object office, said in a statement at the time. “In fact, not a single one of the known objects has any credible chance of hitting our planet over the next century.” Scientists discovered 2003 SD220 back in 2003.

The asteroid was originally thought to be .8 miles wide, but NASA says the latest observations indicate the asteroid is closer to half that size. While there are some published reports saying that 2003 SD220 will be close enough to trigger volcanoes or earthquakes, even without hitting Earth, though astronomy website EarthSky.org declared they are “misleading and incorrect.”

Writing for the website, Eddie Irizarry of the Astronomical Society of the Caribbean said there isn’t any scientific evidence suggesting asteroids can lead to seismic activity simply from a fly-by. That would be different if the asteroid hit Earth, he wrote, but “that clearly will not be the case.”

News agency UPI reported that another asteroid passed much closer to Earth on Halloween, coming within about 310,000 miles of the planet, and that didn’t lead to any adverse effects.

Still, NASA is savoring the opportunity to study the asteroid to learn more about its structure. It will only be close enough for radar detection five times in the next 12 years, according to the blog post. That includes a scheduled 2018 fly-by when it’ll be about 1.7 million miles away.

Christmas Eve became a little more joyful for over 12,000 residents and workers in the area of Liquid Church in New Jersey.

The pastors arranged for what they called a “Spiritual Flash Mob” after services on Christmas eve where members gave bags of cookies and vouchers for meals at local restaurants as a way to show love to their community.

“It’s exciting to see the enthusiasm to go out and share God’s love after each service,” said Liquid Church Pastor Tim Lucas. “And we just heard from some police officers in Times Square sharing that they just received a bag from a Liquid Church family. It made their day to know that they matter, especially on a day like today. Now that’s what we call putting our faith into action.”

“People who work on Christmas Eve, they’re the shepherds keeping us safe – police, firefighters, EMS, nurses and doctors. And there are plenty others who have no choice but to work today,” Lucas told the Christian Post. “So we are commissioning our families to go and spread good news before they do anything else today. We need to let the people they will meet today that they matter to God and to us.”

The church said it was a way for the members of the church to reflect in a way the herald of good news that brought the good news of Christ on Christmas eve.