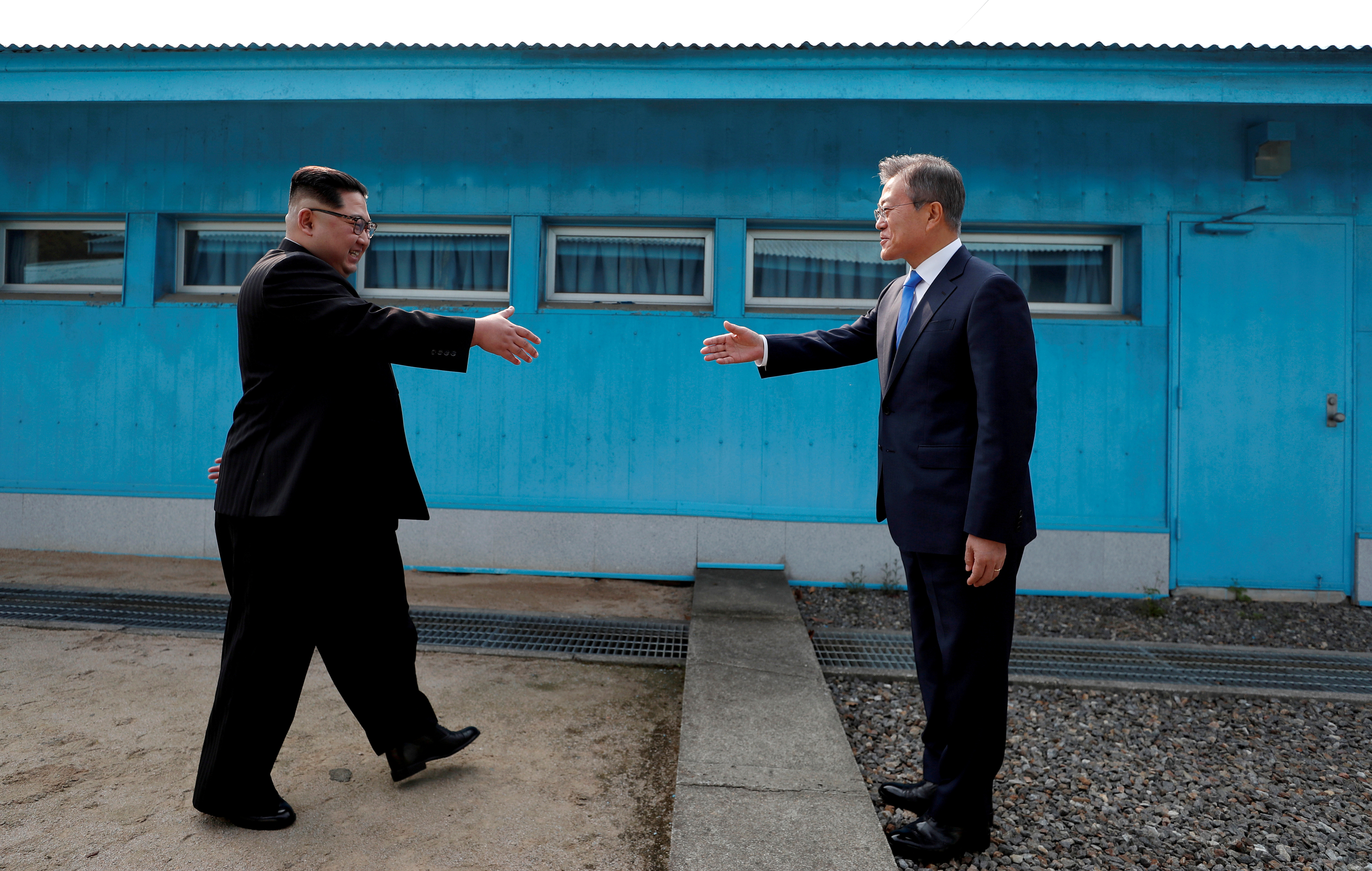 SEOUL (Reuters) – When Seoul was preparing to open a liaison office in the North Korean city of Kaesong this summer after a decade of virtually no contact with its longtime enemy, South Korean officials had heated debates over whether they should seek approval from Washington.

Some top aides to President Moon Jae-in stressed it was an issue for the two Koreas alone and there was no need to involve their U.S. ally, two people with knowledge of the situation told Reuters.

But to the surprise of several officials at the meeting, Unification Minister Cho Myoung-gyon argued Washington must be consulted because Seoul’s plans might run afoul of sanctions imposed on North Korea over its nuclear weapons program.

Two dozen countries including the Britain, Germany and Sweden already have embassies in Pyongyang, and other officials saw the proposed liaison office as a far lower-level of contact with the North.

And they certainly did not expect Cho to be a leading advocate of strict enforcement of sanctions. Cho was Moon’s personal choice to head the ministry, whose prime mission is to foster reconciliation, cooperation and eventual reunification with the North.

Cho, whose 30-year public service history has been inextricably linked to reunification, was even sacked from the ministry in 2008 over his “dovish” stance toward Pyongyang.

At the suggestion of Cho and senior diplomats, Seoul ultimately sought U.S. consent before opening the office in September, one of the sources said.

All the sources spoke to condition of anonymity due to sensitivity of the matter.

Cho declined to comment for this article, but a senior official at the Unification Ministry said it was aware of criticisms of Cho.

“Inter-Korean ties are unique in their nature, but it’s been difficult, and there’s North Korea’s duplicity. It’s a dilemma we face or our fate,” the official said, asking not to be named because of the sensitivity of the issue.

The previously unreported debate among Moon’s top officials illustrates a growing divide within South Korea over how to progress relations with the North while keeping Washington on the side.

Some corners of the administration argue Seoul can’t afford to be seen veering from the U.S.-led sanctions and pressure campaign until Pyongyang gives up its nuclear weapons program, while others feel closer inter-Korean ties can help expedite the stalled diplomatic process, several officials close to the situation say.

“If the internal rift leads to moving too quickly with the North without sufficient U.S. consultations, it could pose a setback to not only the nuclear talks but also the alliance and inter-Korean relations,” said Shin Beom-chul, a senior fellow at the Asan Institute for Policy Studies in Seoul.

That task has become increasingly difficult as Washington and Pyongyang blame each other for the faltering nuclear talks.

U.S. officials insist punishing sanctions must remain until North Korea completely denuclearises. North Korea says it has already made concessions by dismantling key facilities and Washington must reciprocate by easing sanctions and declaring an end to the 1950-53 Korean War.

“Unlike other advisers, Minister Cho has balanced his staunch desire for peace with an understanding of the importance of retaining a strong South Korea-U.S. alignment,” said Patrick Cronin of the Centre for a New American Security, an Asia expert in close touch with both U.S. and South Korean officials.

“Some alliance discord is inevitable and not worrisome. What would be worrisome would be a clear rupture in South Korea-U.S. approaches for managing North Korea.”

The presidential Blue House declined to comment, but Moon told reporters on Monday the view that there was discord between South Korea and the United States was “groundless” because there is no difference in the two countries’ positions on the North’s denuclearization.

A third source familiar with the presidential office’s thinking said there was mounting frustration with Cho within the Blue House and even inside the Unification Ministry amid concerns he worried too much about U.S. views.

“What the president would want from him as the unification minister is to come up with bold ideas to make his pet initiatives happen,” the source said.

During three summits this year, Moon and Kim agreed to re-link railways and roads, and when conditions are met, restart the joint factory park in Kaesong and tours to the North’s Mount Kumgang resort that have been suspended for years.

None of those plans have made much headway, either because sanctions ban them outright, or as in the case of Kaesong, Seoul took time to convince skeptical U.S. officials that cross-border projects wouldn’t undermine sanctions.

North Korea itself has been an unpredictable partner. Discussions through the Kaesong office have been few and far between, with Pyongyang’s negotiators often failing to show up for scheduled weekly meetings without notice, Unification Ministry officials say.

Even so, the Kaesong move has caused tensions with Washington.

Washington was also caught off guard when a group of businessmen who used to operate factories in the now-closed Kaesong industrial park were invited for the opening ceremony of the office, a diplomatic source in Seoul said.

The allies launched a working group last month led by their nuclear envoys to coordinate North Korean policy. It was borne out of U.S. desire to “keep inter-Korean relations in check,” the source said.

Another State official said the United States endorsed April’s inter-Korean summit agreement during its own summit with North Korea “because progress on inter-Korean relations must happen in lockstep with progress on denuclearization.” 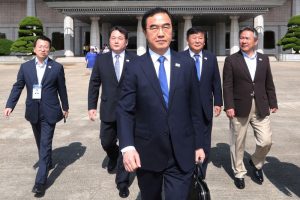 ROCK AND A HARD PLACE

Even as he faced pressure from Washington to hold a tough line, Cho was being criticized for dragging his feet on reconciliation.

In May, the North called off planned talks with the South led by Cho in protest against U.S.-South Korean air combat exercises. When the meeting eventually took place, Cho’s counterpart, Ri Son Gwon, openly blamed Cho for having caused a “grave situation” that resulted in the cancellation of the talks.

At the Kaesong office opening, factory owners pressed Cho to reopen the complex and said they were dismayed at the Unification Ministry for repeatedly rejecting requests to visit the border city to check on equipment and facilities idled since the 2016 shutdown.

“We’ve expressed, directly and indirectly, our complaint that the minister may be too lukewarm about our requests, even though allowing the trip has nothing to do with sanctions,” said Shin Han-yong, who chairs a group of businessmen with plants in Kaesong.

Cho recently told the parliament the delays are due to scheduling issues with the North, adding the ministry “needs more time to explain the overall circumstances” to the international community.

Shin, the expert at Asan, warned any move to undermine sanctions may expose South Korean companies to risks of punishment.

After Moon and Kim’s summit in Pyongyang in September, a senior U.S. Treasury official called compliance officers at seven South Korean banks to warn them that resuming financial cooperation with North Korea “does not align with U.S. policies” and the banks must comply with U.N. and U.S. financial sanctions, according to a South Korean regulatory document.

“Realistically we have no option but to consider U.S. positions, as the top priority is the North’s denuclearization and the United States has the biggest leverage on that,” said Kim Hyung-suk, who served as vice unification minister until last year.

“Without progress on the nuclear issues, there would be constraints at some point in sustaining inter-Korean ties. And Minister Cho knows that.”