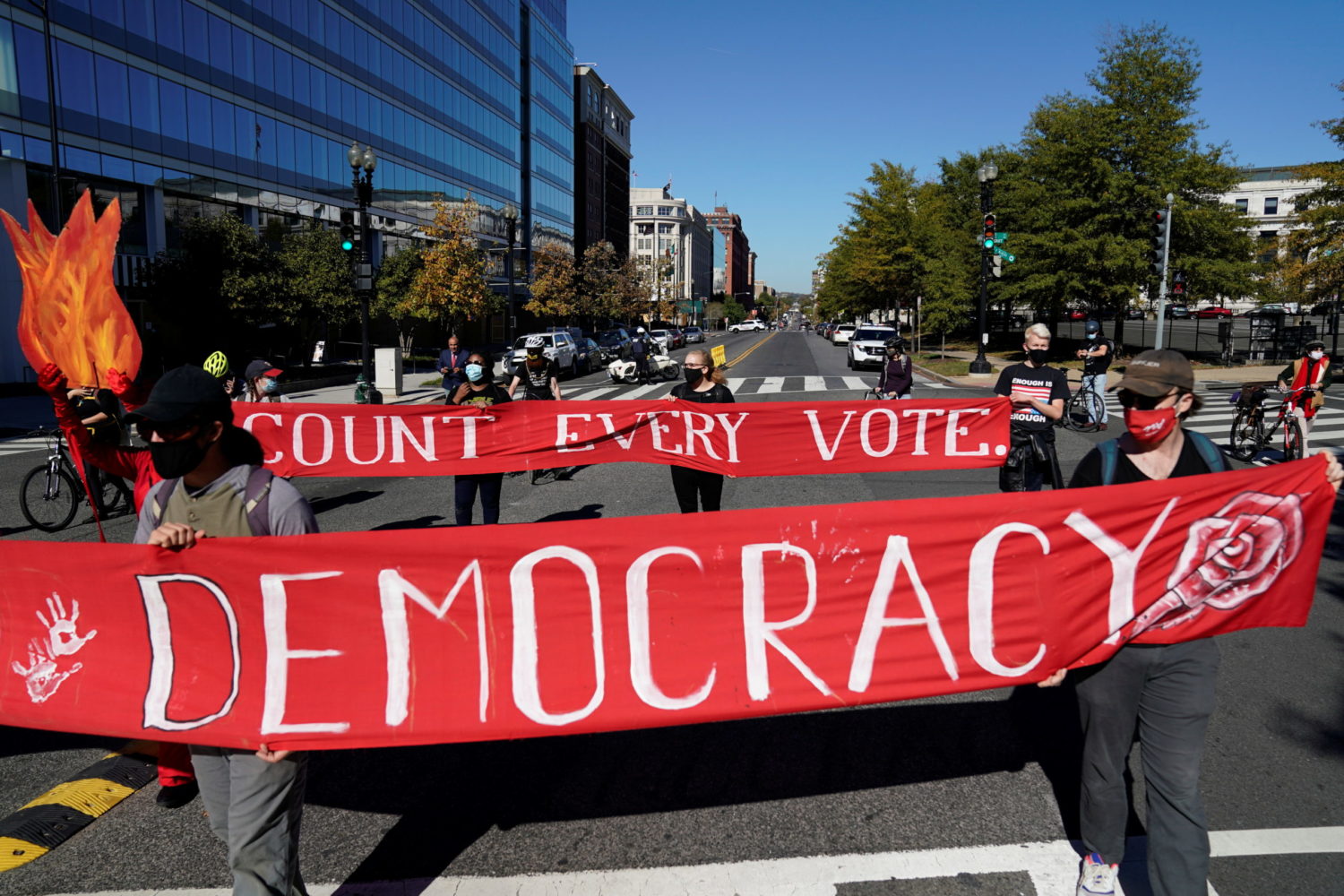 By Michael Martina and Heather Timmons

DETROIT (Reuters) – After months of protests about racism and police brutality, the United States is now likely to see street demonstrations over the cliffhanger presidential election, after President Donald Trump falsely claimed victory and called for voting to stop.

About 100 people gathered for an interfaith event before a planned march through downtown Detroit, in the battleground state of Michigan, on Wednesday morning to demand a full vote count and what they called a peaceful transition of power.

The protest flyer called people to action to stop Trump from “stealing the election.”

Democrat-leaning activists were planning “protect the vote” rallies around Michigan on Wednesday afternoon, including one in front of the state capitol in Lansing.

The excruciatingly close election hung in the balance, with a handful of closely contested states set to decide the outcome in the coming hours or days.

Trump falsely claimed victory in the early hours of the morning and made unsubstantiated allegations of electoral fraud in an extraordinary attack on the electoral process.

Michigan is still counting tens of thousands of ballots and expects to have an unofficial tally by the end of the day, the state’s secretary of state, Jocelyn Benson, told reporters.

Democratic candidate Joe Biden is narrowly leading Republican Trump with about 96% of the votes tallied in Michigan, according to the Detroit Free Press.

Trump’s remarks were the sort of call that protest organizers had planned for. The “Protect the Results” coalition of over 130 groups, from Planned Parenthood to Republicans for the Rule of Law, has said it had about 500 protests organized around the country.

“There were two criteria that were out there: One is Trump officially trying to block the counting of votes and other was falsely declaring that he won, and he did both last night,” said Adam Green, co-founder of the Progressive Change Campaign Committee, a group that supports left-wing Democrats running for office.

Fears of violence on Tuesday did not materialize as Americans turned out by the millions to vote. There were only a handful of incidents reported on an otherwise tranquil Election Day.

The concerns about possible unrest were heightened after a summer of protests, some of which turned violent, against racial injustice following the police killing of George Floyd in Minneapolis in May.

(Reporting by Michael Martina in Detroit and Heather Timmons in Washington; Writing by Jonathan Allen and Frank McGurty; Editing by Alistair Bell) 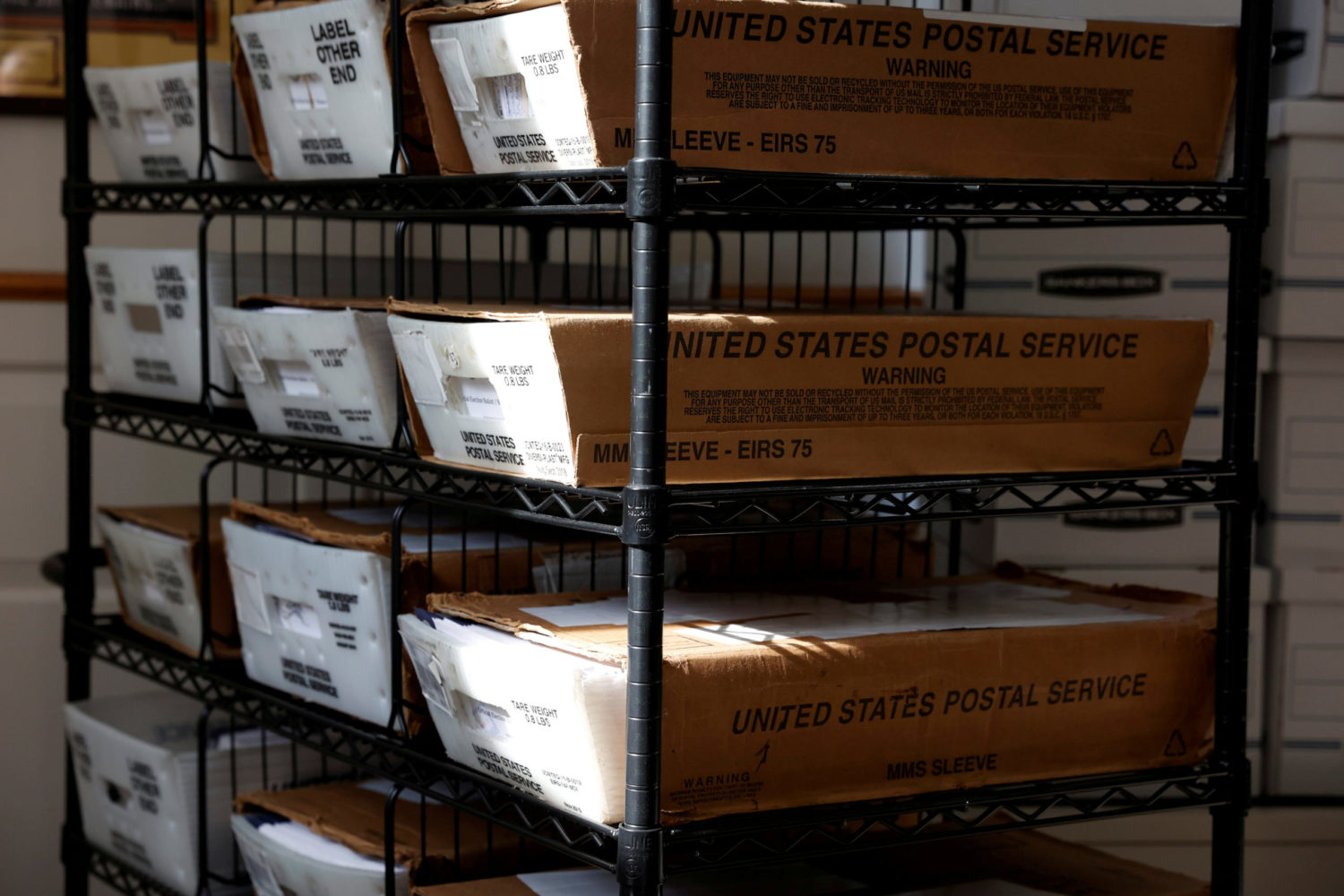 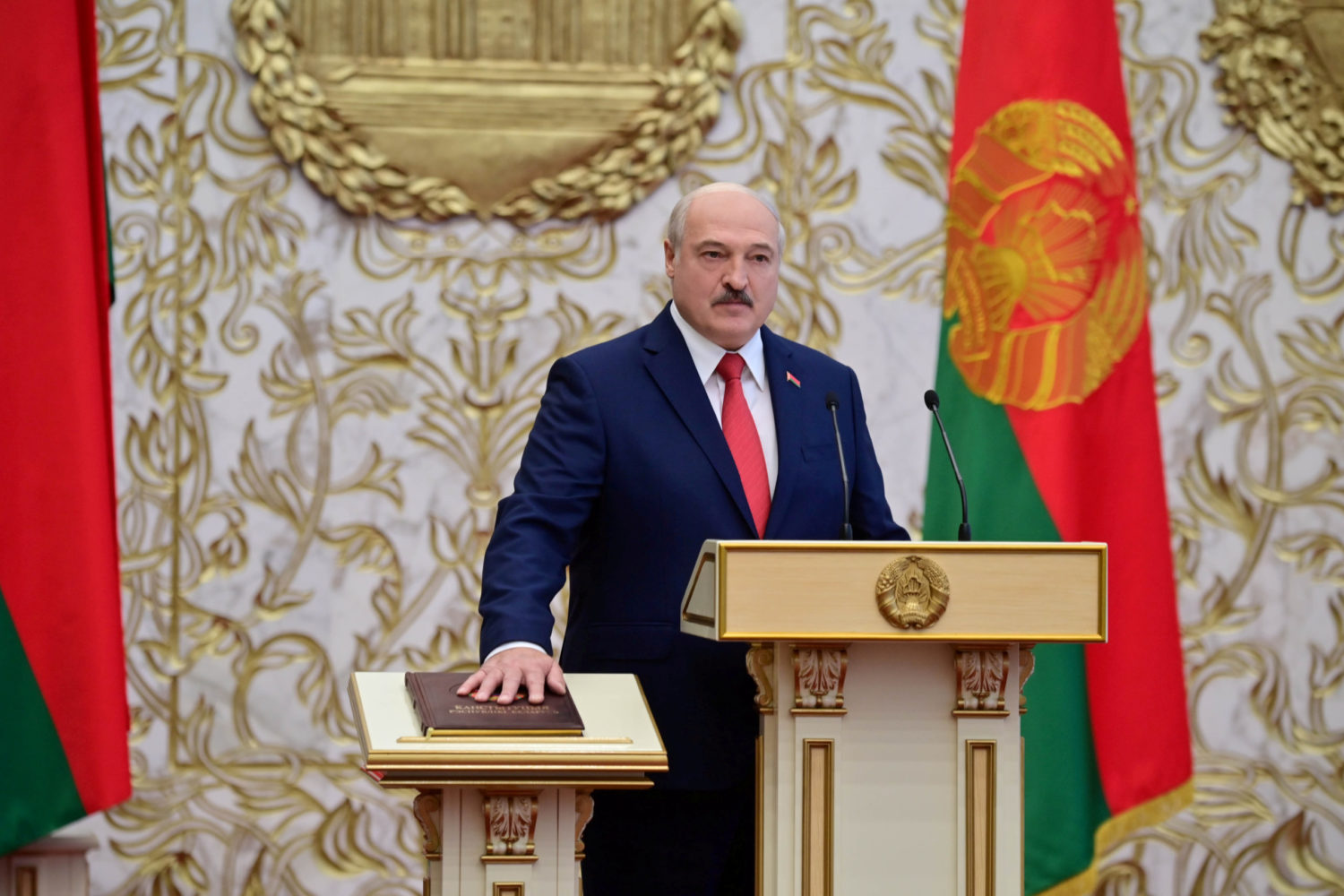 (Reuters) – The United States imposed sanctions on eight Belarusian officials on Friday, accusing them of involvement in rigging President Alexander Lukashenko’s re-election victory in August or the violent crackdown on protests that followed.

The move came after the European Union announced sanctions on 40 people, including the interior minister and the head of the election commission, achieving a breakthrough on the issue at summit talks in the early hours of Friday morning.

Lukashenko was spared, in line with the EU’s policy of punishing powerbrokers as a last resort. He denies electoral fraud and says the protests are backed from abroad.

Lukashenko’s government announced retaliatory sanctions against unidentified officials, recalled its ambassadors to Poland and Lithuania for consultations and nudged both countries to reduce the size of their embassy staff in Minsk.

Lukashenko is grappling to contain nearly two months of street protests that pose the biggest challenge to his 26-year rule. More than 13,000 people have been arrested, and major opposition figures jailed or exiled.

“The United States and our international partners stand united in imposing costs on those who have undermined Belarusian democracy for years,” U.S. Treasury Secretary Steven Mnuchin said in a statement.

The U.S. sanctions also targeted Belarusian Interior Minister Yuri Karaev and his deputy. Those under sanctions are subject to asset freezes and a ban against Americans doing business with them.

Washington had originally been expected to impose sanctions in concert with Britain and Canada, which went ahead on Tuesday with travel bans and asset freezes on Lukashenko, his son Viktor and other senior officials.

Washington has had sanctions on Lukashenko since 2006 but the president was spared in the latest round of measures.

The crisis has pushed Belarus back towards traditional ally Russia, which has propped up Lukashenko’s government with loans and the offer of military support. Moscow sees its ex-Soviet neighbor as a strategic buffer against the EU and NATO.

Lukashenko and Russian President Vladimir Putin spoke by phone on Friday, expressing confidence that “the problems that have arisen will soon be resolved”, the Kremlin said.

Lukashenko’s government announced it had drawn up a list of people who were banned from travelling to Belarus in retaliation for the EU sanctions. It did not name the officials or the countries they were from.

“…we are imposing visa sanctions against the most biased representatives of European institutions, including the European Parliament and the states – EU members,” foreign ministry spokesman Anatoly Glaz was quoted by the official Belta news agency as saying.

“The list is symmetrical in many ways. We have decided not to make it public for now.”

Russia’s foreign ministry said the Belarusian sanctions would apply in Russia as well.

Lukashenko’s government also asked the Polish and Lithuanian embassies to reduce their staff. Both countries refused.

“We are not going to summon our ambassadors for consultations, and we will definitely not do anything to reduce personnel,” Lithuanian Foreign Affairs Minister Linas Linkevicius told reporters.

“We are not interested in reducing our communications channel,” he said. “If the advice becomes a request, then we will take appropriate measures.”

The Belarusian authorities have detained journalists or stripped them of their accreditation as part of the crackdown on the unrest that followed the Aug. 9 election.

On Friday, the foreign ministry announced it was stripping journalists working for foreign media organizations of their accreditation, and asked them to reapply for their permits.

“I would like to make it clear that it is in no way some attempt to cleanse the news reporting field,” Glaz was quoted by Belta as saying.

The EU sanctions had been held up by Cyprus due to an unrelated dispute with Turkey. The delay dented the credibility of the EU’s foreign policy, diplomats said.

“That we could now agree to those sanctions is an important signal because it strengthens the hand of those who are protesting for freedom of opinion in Belarus,” German Chancellor Angela Merkel told journalists.

Merkel will meet on Tuesday with Sviatlana Tsikhanouskaya, Lukashenko’s main electoral opponent who fled into exile after the vote in the ex-Soviet republic, fearing for her family’s safety.