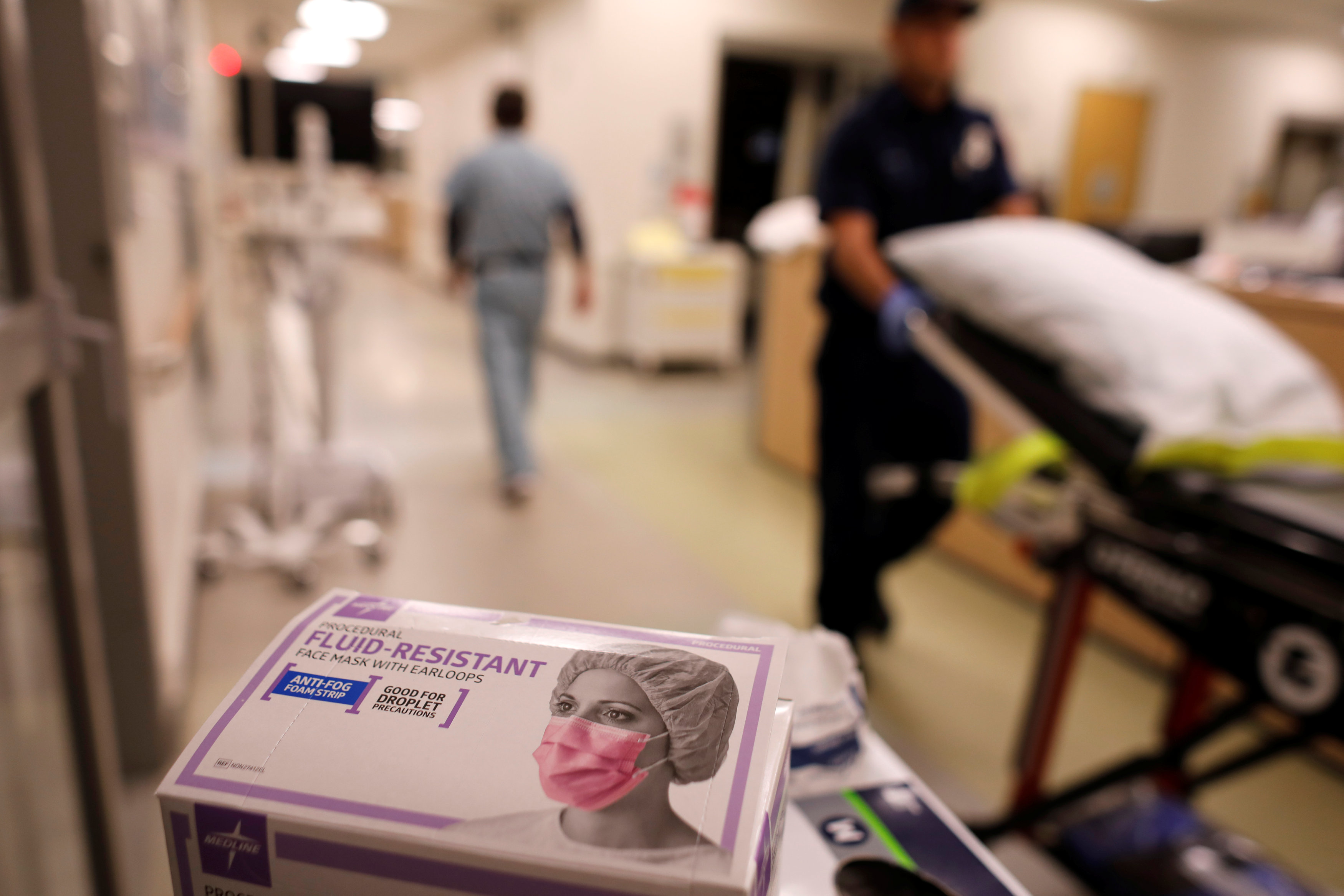 (Reuters) – One of the worst flu outbreaks in the United States in nearly a decade worsened last week and will likely linger for several weeks, causing more deaths, the Centers for Disease Control and Prevention said on Friday.

Another 10 children were reported to have died of the flu in the week ending Feb. 3, bringing the total infant mortality so far this season to 63, Dr. Anne Schuchat, the CDC’s acting director, told reporters. The CDC does not require national reporting of flu deaths in adults.

“I wish there were better news this week, but almost everything we’re looking at is bad news,” Schuchat said. “There have been far too many heart-wrenching stories in recent weeks about families who have lost loved ones to influenza.”

It was unclear whether the outbreak had reached its peak yet or if it would get worse, she said. Previous outbreaks had lasted between 11 and 20 weeks, and the current outbreak was in its 11th week, she said.

The number of people hospitalized for flu-like illnesses is the highest the CDC has seen since starting its current tracking system in 2010.

The dominant flu strain this season, influenza A (H3N2), is especially potent, linked with severe disease and death, particularly among children and the elderly.

The outbreak has reached almost every corner of the country, with every state except Hawaii and Oregon reporting widespread flu, Schuchat said.

She urged sick people to stay home and said it is still not too late for people to get a flu vaccine, which offers some protection. 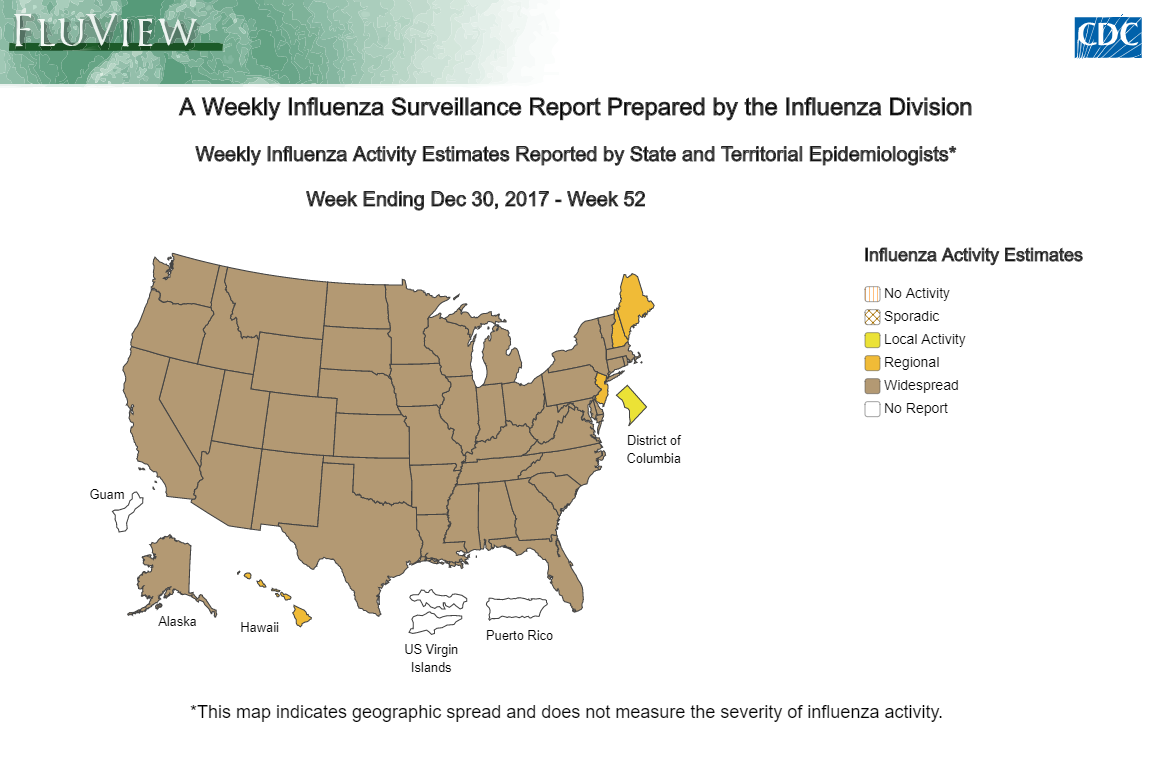 Flu season is upon us and this year according to the CDC, reports do not look good. In states like California, pharmacies are running out of flu medicine, emergency rooms are packed with patients, and the death toll is three times higher now than this time last year.  So far, in that state alone 27 people under the age of 65 have died since October.  And the cases have now spread across the country.

The flu outbreak covers the entire United States with many hospitals filling to capacity.  Although it has not been called an epidemic yet, this year’s flu season has already spread faster and further than it did last year at this time. The CDC has also reported that during the week of Christmas the flu virus has increased sharply across the nation.

The Los Angeles Times reported that UCLA Medical Center in Santa Monica are seeing over 200 patients a day in emergency rooms.  Dr. Wally Ghurabi, the ER medical director remarked on what they are seeing daily, “The Northridge earthquake was the last time we saw over 200 patients.”

Methodist Dallas Medical Center’s emergency room is so overrun with flu cases that it is asking people with non-emergency symptoms to go to urgent care centers or see a primary care physician. And many hospitals have gone into diversion mode having to send ambulances to other hospitals and not accepting flu patients.

The most prevalent strain of flu that is being reported by public health laboratories is influenza A(H3).  Symptoms come on suddenly and can begin with any of these symptoms; Body Aches, Fever, Headache, Sore Throat, Cough, Exhaustion, Cold like symptoms of Congestion and more frequently in children can include Vomiting and Diarrhea.

According to the CDC, most healthy adults may be able to infect other people beginning 1 day before symptoms develop and up to 5 to 7 days after becoming sick. Symptoms start 1 to 4 days after the virus enters the body. That means that you may be able to pass on the flu to someone else before you know you are sick, as well as while you are sick. Some people can be infected with the flu virus but have no symptoms. During this time, those persons may still spread the virus.

It is vital to note that people with the flu can spread it to others from up to about 6 feet away when those infected cough, sneeze or talk and the droplets land in the mouths or noses of people nearby or are inhaled into the lungs. A person might also get flu by touching a surface or object that has flu virus on it and then touching their own mouth or nose.

If you have been exposed to the flu, being aware of the risk of spreading is vital to slowing down this virus. Encourage family, friends and co-workers to frequent hand washing for at least 20 seconds with soap and water or use an alcohol based hand rub. Frequently touched surfaces such as telephones, computer keyboards, desks, doorknobs, light switches, should be cleaned and disinfected especially if someone ill has been around them.

Anyone who is sick should stay home! By going to work or school you are only putting others who come into contact with you and their families at risk. Those who are the most vulnerable for this virus to become fatal are the very young, the elderly, and those that have other medical conditions. But there have been reports of healthy adults who are succumbing to this virus.

Nobody is immune to the flu virus.  Health officials say that it is not too late for a flu shot even though at this time the current vaccine is only 10% effective in avoiding this strain of flu, but are also stating that while the flu shot may not protect you from the getting the flu it can absolutely help in your recovery if you are exposed to it.

NOTE:  Morningside hopes you are taking good care of yourself. For many health items we use here at the ministry that can help you stay at your healthiest, please visit our store!

Early estimates of the flu vaccine show that it has been just 23 percent effective at preventing doctor visits for all ages.

The flu vaccine is not the worst ever, as one vaccine this decade has been as low at 10 percent effective, but the low totals are enough for the Centers for Disease Control to urge doctors to increase antiviral prescriptions should a patient show signs of flu.

The weakness of the vaccine is blamed on the prevalence of the H3N2 strain of flu that is circulating most among citizens.

“Physicians should be aware that all hospitalized patients and all outpatients at high risk for serious complications should be treated as soon as possible with one of three available influenza antiviral medications if influenza is suspected, regardless of a patient’s vaccination status and without waiting for confirmatory testing,” said Joe Bresee, branch chief in the CDC’s Influenza Division.

The vaccine was showing 26 percent effectiveness in children six months through 17 years but only 14 percent for adults over 50.

The flu season is being called “moderately severe” by the CDC.