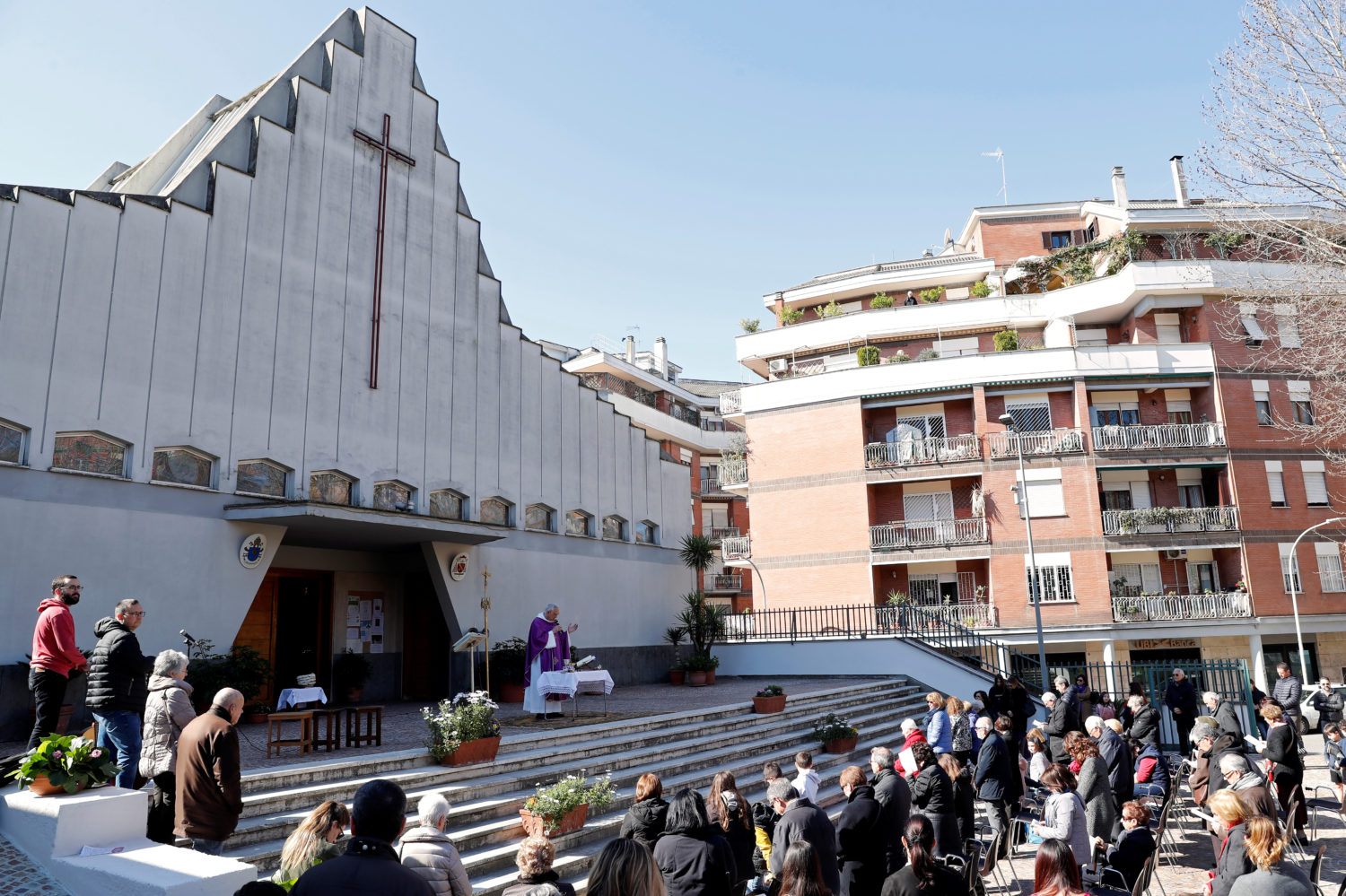 By James Mackenzie and Crispian Balmer

MILAN (Reuters) – Italy ordered a virtual lockdown across much of its wealthy north, including the financial capital Milan, in a drastic new attempt to try to contain a outbreak of coronavirus that saw the number of deaths leap again sharply on Sunday.

The unprecedented restrictions, which aim to limit gatherings and curb movement, will impact some 16 million people and stay in force until April 3. They were signed into law overnight by Prime Minister Giuseppe Conte.

The new measures say people should not enter or leave Lombardy, Italy’s richest region, as well as 14 provinces in four other regions, including the cities of Venice, Modena, Parma, Piacenza, Reggio Emilia and Rimini.

Only people with proven, work-related reasons, or health problems will be able to move in and out of the exclusion zones. Leave has been canceled for health workers. 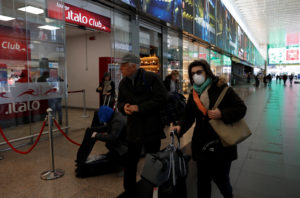 A woman wears a protective face mask at Roma Termini railway station, after the Italian government imposed a virtual lockdown on the north of the country, in Rome, Italy, March 8, 2020. REUTERS/Yara Nardi

“We are facing a national emergency. We chose from the beginning to take the line of truth and transparency and now we’re moving with lucidity and courage, with firmness and determination,” said Conte.

“We have to limit the spread of the virus and prevent our hospitals from being overwhelmed,” he told a news conference called in the early hours of Sunday.

Italy has been hit harder by the crisis than anywhere else in Europe so far and Sunday’s latest figures showed that starkly.

The number of coronavirus cases jumped 25% in a 24-hour period to 7,375, while deaths climbed 57% to 366 deaths. It was the largest daily increase for both readings since the contagion came to light on Feb. 21.

Antonio Pesenti, head of the Lombardy regional crisis response unit, told the Corriere della Sera newspaper the health system in Lombardy was “a step away from collapse” as intensive care facilities came under growing strain from the new cases.

The Milan stock exchange, whose all-share index has plunged 17% since the crisis broke, was scheduled to open normally on Monday but one trader said he expected “a violent sell-off” as markets digested the lockdown of Italy’s economic heartland.

The World Health Organization said it fully supported the actions taken by Italy, which were in line with its guidelines for containing the spread of the virus.

But with the Italian economy already on the edge of recession, some local politicians pushed back against the measures, which leaked out before the regions were consulted.

The head of Veneto, Luca Zaia, complained he had not been properly consulted and was unhappy that three provinces in his region, including Venice, had been included in the clampdown.

“We do not understand the rationale of a measure that appears scientifically disproportionate to the epidemiological trend,” he wrote on Facebook.

On Saturday, health officials had expressed alarm at the apparent lack of concern in the general public, as fine weekend weather attracted large crowds to the ski slopes outside Milan. But streets were notably quieter than normal as northern cities woke up to the news on Sunday.

“What is happening in my city is worrying me and it is also saddening, because Milan is a lively city and to see it like this today is almost a defeat for me,” said resident Lucia Navone. “I never would have thought this would happen.”

Public transport services were operating and train stations were still running as people caught away from home when the measures came into force were allowed to return.

But national carrier Alitalia said it would suspend international and domestic services from Milan’s main Malpensa airport from Monday and operate only domestic flights from the smaller Linate airport.

There was some confusion about what controls there would be from Monday on shops, offices and factories. Assolombarda, a business association that represents employers in Lombardy, said it understood the measures would not stop businesses from working or block deliveries of supplies of goods provided appropriate protective measures were adopted.

However, all museums, gyms, cultural centers, ski resorts and swimming pools in the targeted zones will have to close.

Top flight Serie A soccer matches were played behind closed doors despite a call from the country’s sports minister to stop the championship. The Italian Soccer Federation said it would meet on Tuesday to discuss the situation.

FIPE, a body representing restaurants and catering businesses, said the sector faced devastation and criticized measures that it called “incoherent and difficult to apply”.

Church services on Sunday were also canceled in the region.

Pope Francis delivered his Sunday blessing over the internet from inside the Vatican instead of from a window to stop crowds gathering in St Peter’s Square to see him.

On Sunday, the head of Piedmont region said he had tested positive for the virus despite having no symptoms — the second regional chief to be infected in 24 hours — while Army Chief of Staff General Salvatore Farina also contracted the illness.

As the alarm spread, Czech Prime Minister Andrej Babis said Italy should ban all its citizens from traveling to Europe. Austrian Chancellor Sebastian Kurz said it was only a matter of time until more European countries adopt the kind of aggressive steps that Italy is taking to combat the spread of the virus. 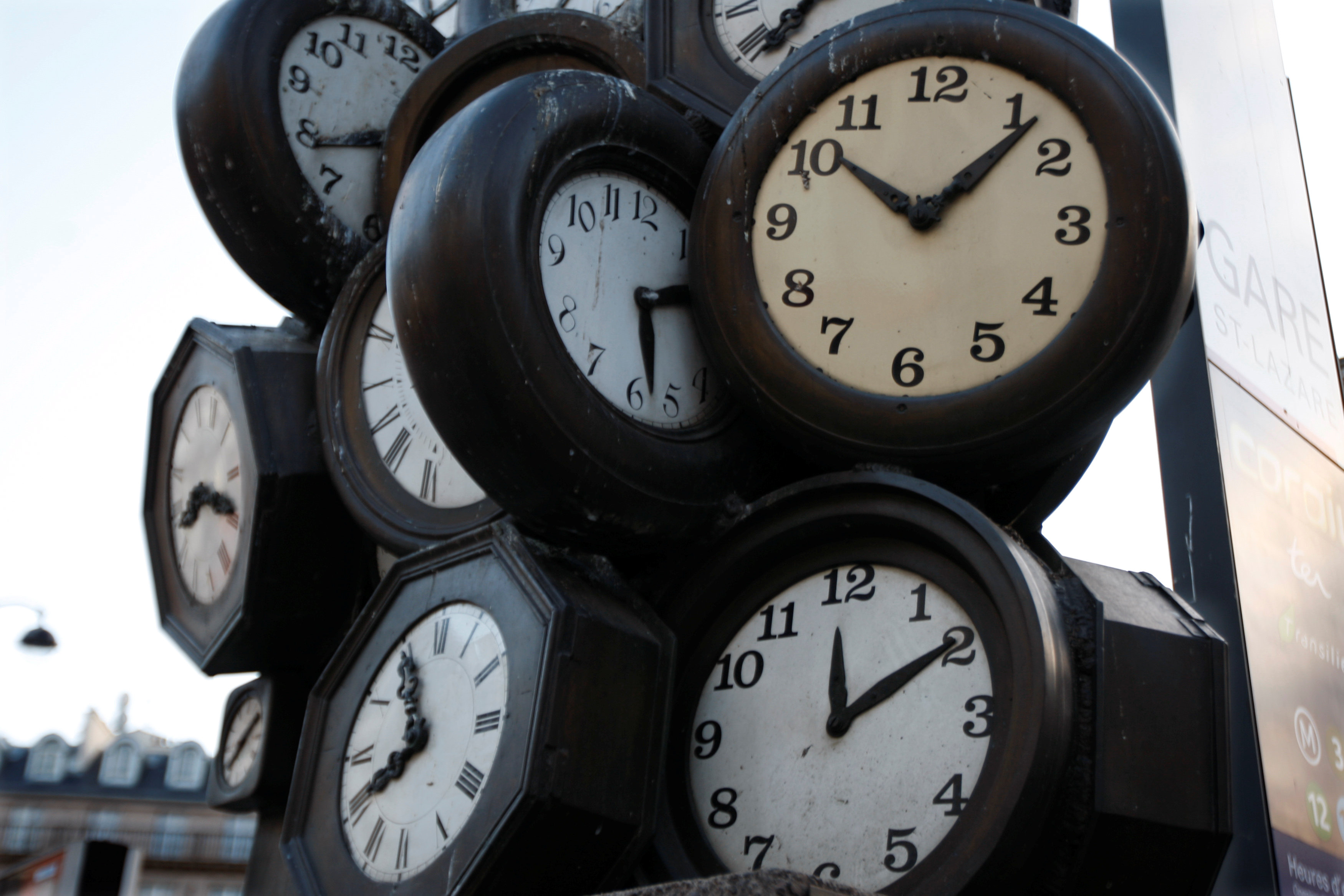