Doctors are telling people who sit at work all day to stand up and walk around the office because sitting for extended periods is as bad for your health as smoking.

Dr. Max Gomez of CBS New York reports the “couch-potato” lifestyle of Americans is resulting in deaths at the same rate as the known health threat.

Dr. Gomez is not alone.

“Smoking certainly is a major cardiovascular risk factor, and sitting can be equivalent in many cases,” Dr. David Coven, a cardiologist at St. Luke’s-Roosevelt Hospital Center, told CBS. “The fact of being sedentary causes factors to happen in the body that are very detrimental.”

Doctors say that you don’t necessarily need to do a 30-minute workout in a gym each day to fight the issues that come with a job requiring you to sit for long periods.  Even walking for 10 minutes at a time three times a day will help improve your health quality.

The key, doctors say, is to undertake activities that get your blood flowing to keep plaque from being able to deposit in arteries.

A new study has shown that parents who pay little attention to their children are more likely to have children who become internet addicts.

A study of young adults showed the parents labeled as tough or demanding along with showing little affection were also those most connected to children with personality traits that made it difficult for them to interact with other humans.

“In short, good parenting, including parental warmth and affection, that is caring and protective parents, has been associated with lower risk for Internet addiction,” Argyroula E. Kalaitzaki of the Technological Education Institute (TEI) of Crete in Heraklion told Yahoo news, “whereas bad parenting, including parental control and intrusion, that is authoritarian and neglectful parents, has been associated with higher risk for addiction.”

Internet addiction is still considered a fairly new psychological diagnosis and scientists have not fully agreed on a definition for addiction.

“Parents that identify their children to have some symptoms of addiction, like excessive time spent online or need to spend increasingly longer periods online, inadequate sleep and fatigue, apathy, nervousness, or irritability when offline, impairments in relationships and schoolwork or employment, should contact a health care professional as soon as possible,” Kalaitzaki said. 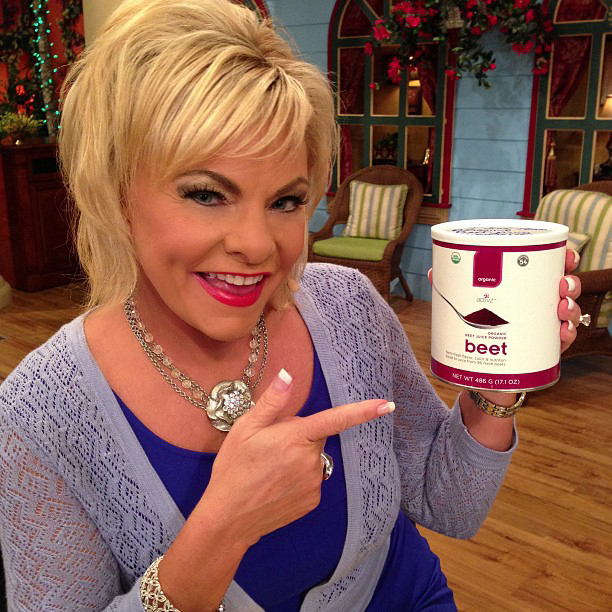 There is a lot of pressure in the responsibility for a Christian television show seen daily by millions. Occasionally, that pressure can be overwhelming, especially when you’re sick! Most people that saw the show in December and now in January had no idea that I was very sick when we filmed most of them. But, as they say in Hollywood, “the show must go on.” So, it did.

The only way I was able to continue to meet the demands of our taping schedule, was by giving my body everything it needed to help me through the sickness – and, of course, by the prayers of the saints. I added action to faith and the Lord saw me through it.

If it were not for all the nutritional products that God has brought into our lives and that we offer all of you, I would not have made it in December when I was so very sick – or any other time, for that matter. We ‘practice what we preach’ when it comes to the things we offer and you can be sure that I used every single thing I could to give me the strength I needed to get through the days. END_OF_DOCUMENT_TOKEN_TO_BE_REPLACED

The Food and Drug Administration issued a warning Friday that over the counter laxatives could be a threat to health.

The release from the FDA said that laxatives are potentially dangerous if consumers don’t follow dosing instructions.

At least 13 deaths have been reported to the FDA because of laxative use.

The FDA said that adults over 55 or anyone with kidney disease should be very careful to use laxatives without a doctor’s approval.

“The bottom line is that these products are safe for otherwise healthy adults and older children for whom dosing instructions are provided on the Drug Facts label as long as they follow these dosing instructions and don’t take the product more often, or in greater amounts, than the label instructs,” Dr. Mona Khurana of the FDA said.

The study showed patients with high levels of “bad” cholesterol in their blood were more likely to have tangles of protein inside their brain cells, a common physical symptom of Alzheimer’s.  The tangles, called beta amyloid plaques, interfere with the function of brain cells.

The exact causes of the build up are not yet understood and will be undergoing further testing.

However, the study showed that “good” cholesterol actually had a preventative effect on the brain and reduced the plaques on the brain.

The doctors noted the cholesterol that can be linked to Alzheimer’s is the same as the kind that increases heart disease and the risk for a heart attack.

Parallel research is showing that the risk of Alzheimer’s or dementia could be reduced by a third if cholesterol is brought under control.  A healthy diet with organic foods and natural sweeteners contributes to increasing good cholesterol.

A new study is suggesting that men and women with severe stress in their lives run a much greater risk of stroke than the average person.

The study from the University of Pittsburgh School of Medicine showed a direct connection between stroke and the level of stress in someone’s life. The study followed men and women for 16 years to track stress along with blood pressure and other health issues.

“Assessment and treatment of anxiety has the potential to not only improve overall quality of life, but may also reduce the risk of cardiovascular diseases, such as stroke, later in life,” Dr. Maya Labiase told Reuters.

Stroke is one of the leading causes of death in the United States.

The study also showed that people with high stress in their lives tended to choose activities which increase stress on the body like smoking and alcohol abuse.

A new study by the American Heart Association is hailing walking as a tremendous exercise that could extend life.

The study showed people who walk enough to meet or exceed daily physical activity recommendations are less likely than others to die early. The AHA recommends that adults be physically active for at least 2 and a half hours a week. The study also shows that exercising more can have additional benefits.

Of those who met the requirements for walking each week, there was an 11 percent lower chance of death. Exceeding the rate for the week decreased the likelihood of death by one third.

Those who exceeded the recommended limits also showed less heart disease and diabetes.

An internal McDonald’s website is telling employees the food they serve to customers is not healthy.

The London Daily Mail released screenshots of the McResource Line website that showed “unhealthy choice” beside a burger, fries and large soda while next to it “healthier choice” showed a deli sandwich, salad and water.

The website even tells employees that “avoiding items that are deep fried are your best bet.”  The burger, fries and soda were on the unhealthy list because “eating a diet high in fat puts people at risk for becoming overweight.”

The newspaper quotes the site telling employees to “eat at places that offer a variety of salads, soups and vegetables.”

The website is the same one that told McDonald’s employees to get a second job, apply for food stamps or sell their possessions to make ends meet in the current financial crisis.

A spokesperson told CNBC that media outlets were taking the website “completely out of context.”

A 17-year-old’s attempt to accelerate weight loss ended up causing so much liver damage he is now awaiting a transplant.

Christopher Herrera had bought concentrated green tea extract at a nutrition store as a “fat burner.” Herrera ended up weeks later at Texas Children’s Hospital with his chest, face and eyes so yellow that his doctor called it almost “highlighter yellow.”

A new study is showing that dietary supplements not regulated by the FDA account for almost 20 percent of liver injuries in hospitals. The number is more than double the 7 percent rate from a decade ago. Investigators say they were only counting “severe” cases of liver damage and were deliberately undercounting the total number of cases.

The FDA is banned from approving or evaluating most supplements before they enter the market because of the 1994 Dietary Supplement Health and Education Act. The FDA can only act until the items are on sale and in many cases only if people have been reported to be harmed by a supplement.

A new report on deaths linked to the 2009 H1N1 swine flu pandemic shows the total number of deaths to be more than ten times higher than reported by the World Health Organization.

The study also discovered that respiratory deaths in the Americas can be 20 times higher than the death rates in Europe.

Examining only deaths from pneumonia that could have been connected to the flu, the study showed Mexico, Argentina and Brazil had the highest death rates from the pandemic. The toll was significantly lower in New Zealand, Australia and in most of Europe.

“[The report] confirms that the H1N1 virus killed many more people globally than originally believed,” study author Lone Simonsen of George Washington University said. “We also found that the mortality burden of this pandemic fell most heavily on younger people and those living in certain parts of the Americas.”

The World Health Organization said in 2010 the death toll from H1N1 was around 18,500 but noted their total was limited to laboratory confirmed testing.