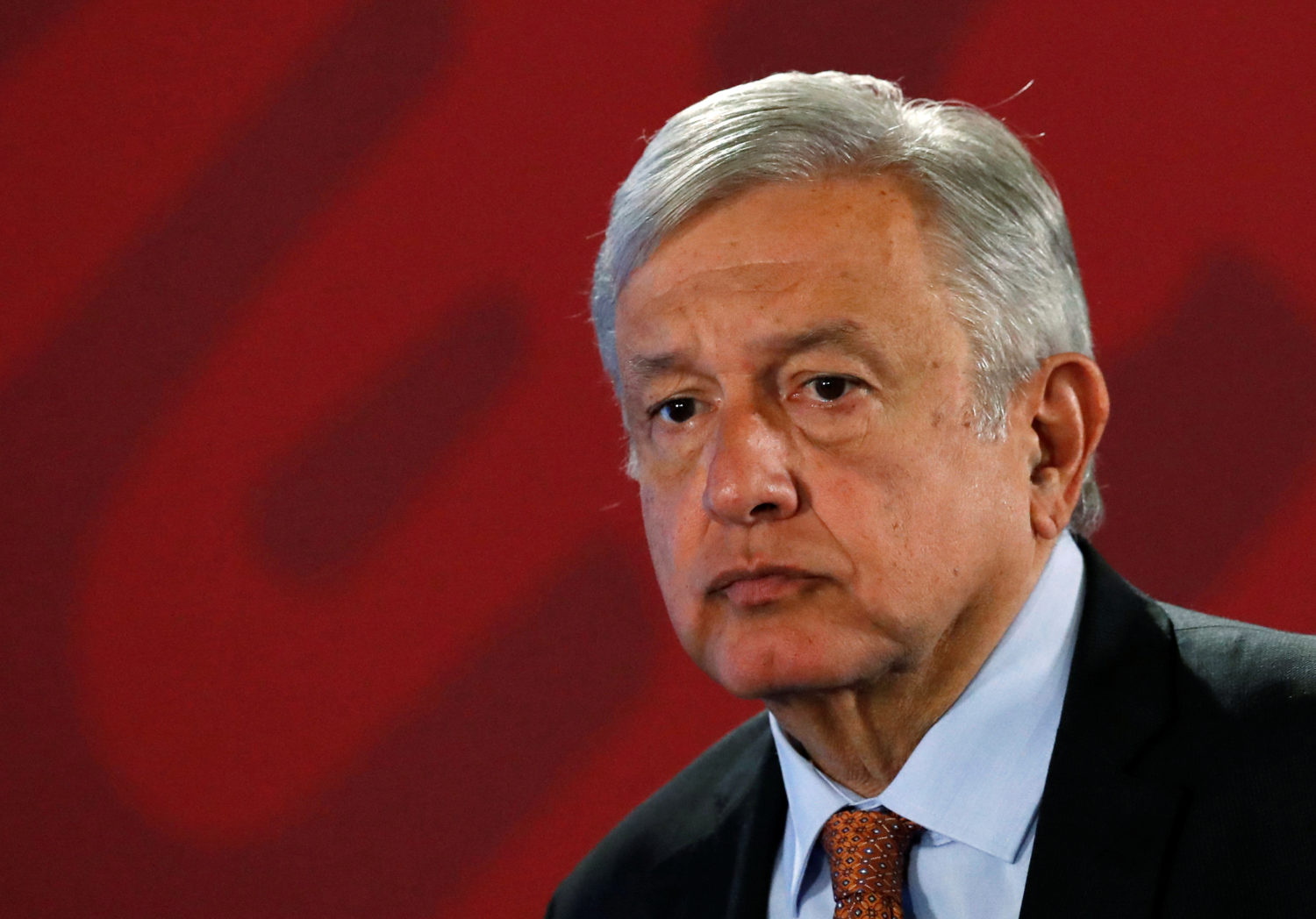 MEXICO CITY/WASHINGTON (Reuters) – Seeking to speed up U.S. ratification of a North American trade deal, Mexican President Andres Manuel Lopez Obrador on Tuesday vowed to implement union freedoms, higher wages and other labor rights ahead of a meeting with a delegation of U.S. lawmakers.

House Ways and Means Committee Chairman Richard E. Neal led a delegation of House Democrats that was to meet with Lopez Obrador, other officials and workers on Tuesday to hear more about Mexico’s labor situation.

“They want to know if the labor law will be implemented… of course we will comply with enforcing this law,” Lopez Obrador told his regular news conference.

“The reform is so that… workers can freely choose their representatives, and so there is union democracy and better wages for workers,” he said.

The USMCA trade deal, which would replace the trillion-dollar North American Free Trade Agreement, risks getting bogged down in the 2020 U.S. presidential election race if U.S. lawmakers do not ratify it soon.

Lopez Obrador called for ratification as soon as possible.

Top Republicans in the U.S. Congress and U.S. trade groups on Tuesday pressed lawmakers to approve the deal and not allow an impeachment inquiry against President Donald Trump to delay it.

Ann Wilson, chief lobbyist for the Motor & Equipment Manufacturers Association, said industry had delayed key investments given continued uncertainty over the agreement a year after it was signed by the three countries’ leaders.

“We don’t have time to waste. We need to get it done,” she said.

“With election year politics upon us, time isn’t on our side. But the window of opportunity hasn’t closed yet. Democrats must act now,” they said in a joint statement. 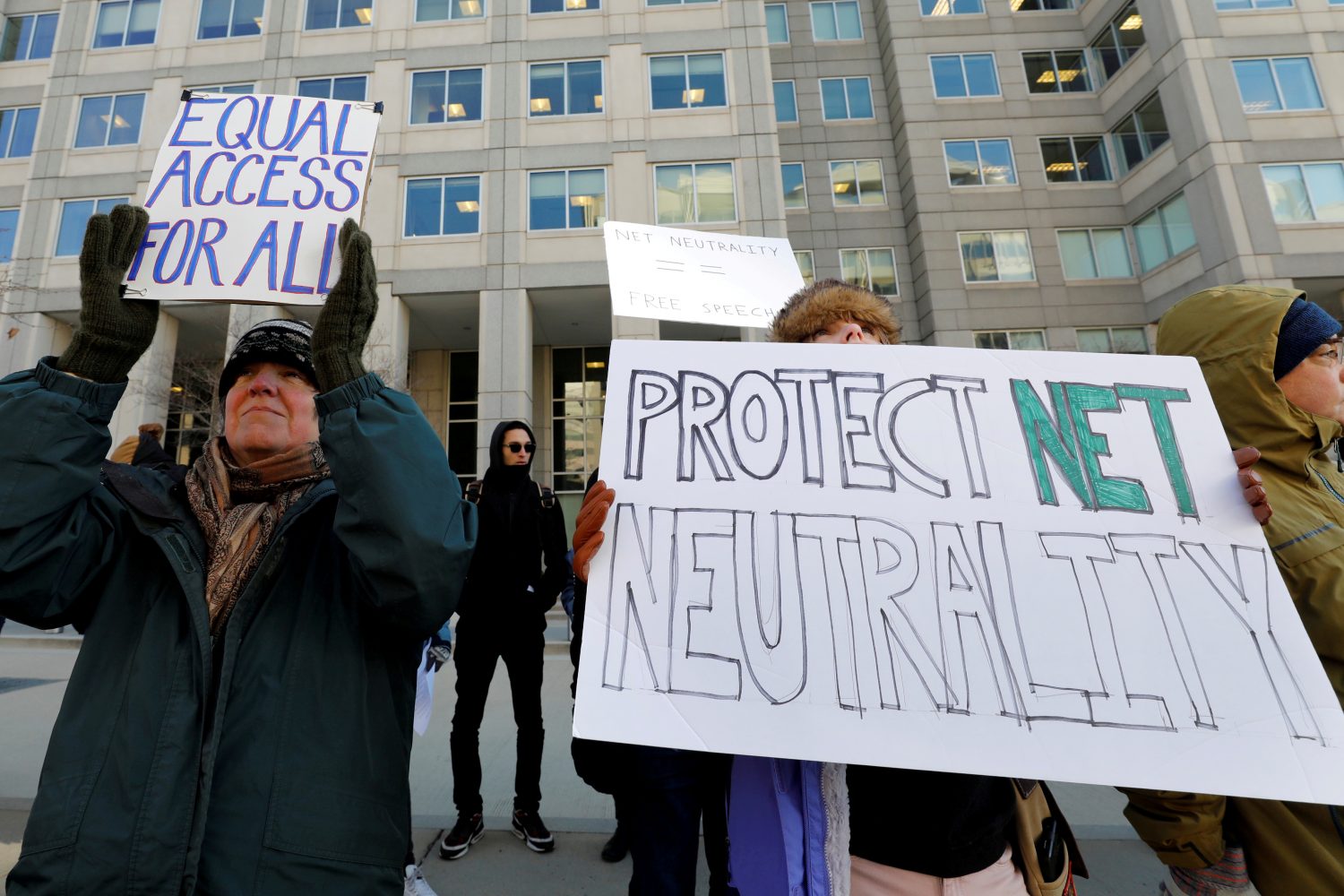 WASHINGTON (Reuters) – Democrats in Congress unveiled a bill on Wednesday to reinstate net neutrality rules repealed by the Federal Communications Commission under U.S. President Donald Trump, the latest salvo in a more than decade-long battle over how to regulate internet traffic.

“It is a fight that we can win,” said Senator Ed Markey, a bill sponsor, at a Capitol Hill news conference. “We are on the right side of history. We will not give up.”

He said the bill, dubbed the “Save the Internet Act,” will protect consumers from higher prices, blocked websites or slower internet speeds.

The reversal of net neutrality rules was a win for internet providers like Comcast Corp, AT&amp;T Inc and Verizon Communications Inc, but opposed by content and social media companies like Facebook Inc, Amazon.com Inc and Alphabet Inc.

The bill would repeal the order introduced by FCC Chairman Ajit Pai, bar the FCC from reinstating it or a substantially similar order and reinstate the 2015 net neutrality order, a fact sheet said.

Pai said in a statement that the 2017 rule “has proven wrong the many hysterical predictions of doom … most notably the fantasy that market-based regulation would bring about &lsquo;the end of the Internet as we know it.&rsquo;”

He suggested that the main thing the internet needs to be saved from is “heavy-handed regulation from the 1930s” that would treat it as a public utility.

Markey said the bill has the support of nearly all Democrats, and a companion bill will be introduced in the House of Representatives on Friday. Democrats say they expect the House will vote on the bill in the next few months.

Republicans oppose reinstating the 2015 rules that grant the FCC sweeping authority to oversee the conduct of internet providers.

House Republicans Greg Walden, Bob Latta and Cathy McMorris Rodgers said in a statement that both parties believe “a free and open internet is fundamental to our society.”

“All sides want a permanent solution,” they said.

Representative Frank Pallone, a Democrat who chairs the Energy and Commerce Committee, said the FCC ignored the will of the American people in repealing the rules.

The Senate, which is controlled by Republicans, voted in May 2018 to reinstate the rules, but the House did not take up the issue before Congress adjourned last year.

In its 2017 decision, the Republican-led FCC voted 3-2 along party lines. The agency gave providers sweeping power to recast how users access the internet but said they must disclose changes in internet access. 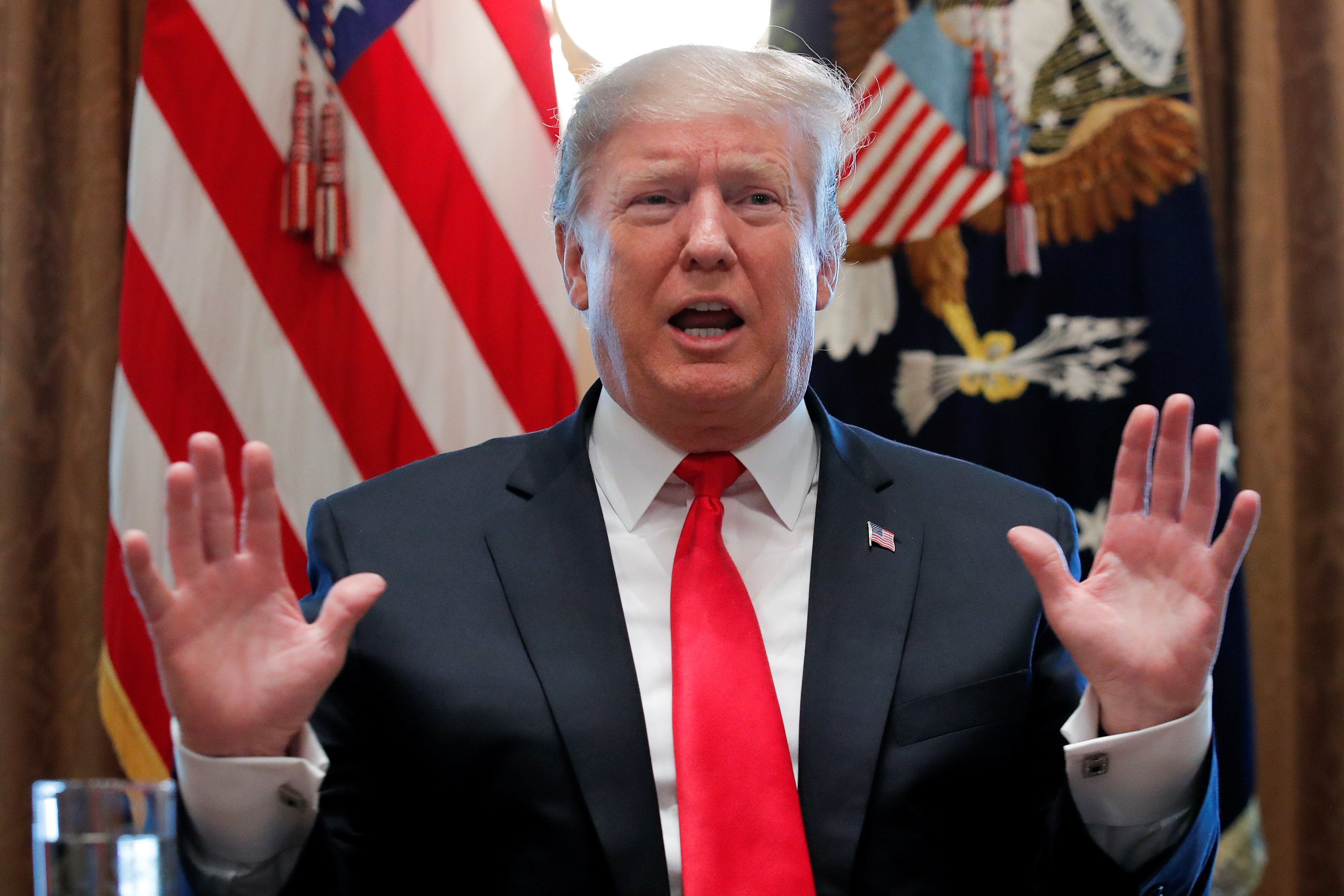 WASHINGTON (Reuters) – President Donald Trump said on Friday he might declare a national emergency to obtain funding to build a wall along the U.S. border with Mexico because it did not appear Democrats were moving toward a deal that would provide the money.

“We’re not getting anywhere with them,” Trump said during an event at the White House.

“I think there’s a good chance that we’ll have to do that,” he added, referring to the possibility of an emergency declaration that could allow him to use funds that Congress has approved for other purposes.

His comments came a day after Nancy Pelosi, the Democratic speaker of the House of Representatives, told reporters, “There’s not going to be any wall money” in legislation to fund border security for the rest of this year.

Pelosi said funding for more ports of entry or additional border security technology was open for negotiation. She added that the 17 House and Senate negotiators working on legislation to fund homeland security for the year should decide the components of the nation’s border security.

Democratic negotiators unveiled a detailed opening position containing no money for any type of additional physical barriers on the border to control the flow of undocumented immigrants and illegal drugs. Previously they had supported $1.3 billion for new fencing and improvements to existing barriers.

Trump has said he has to have a wall for border security. 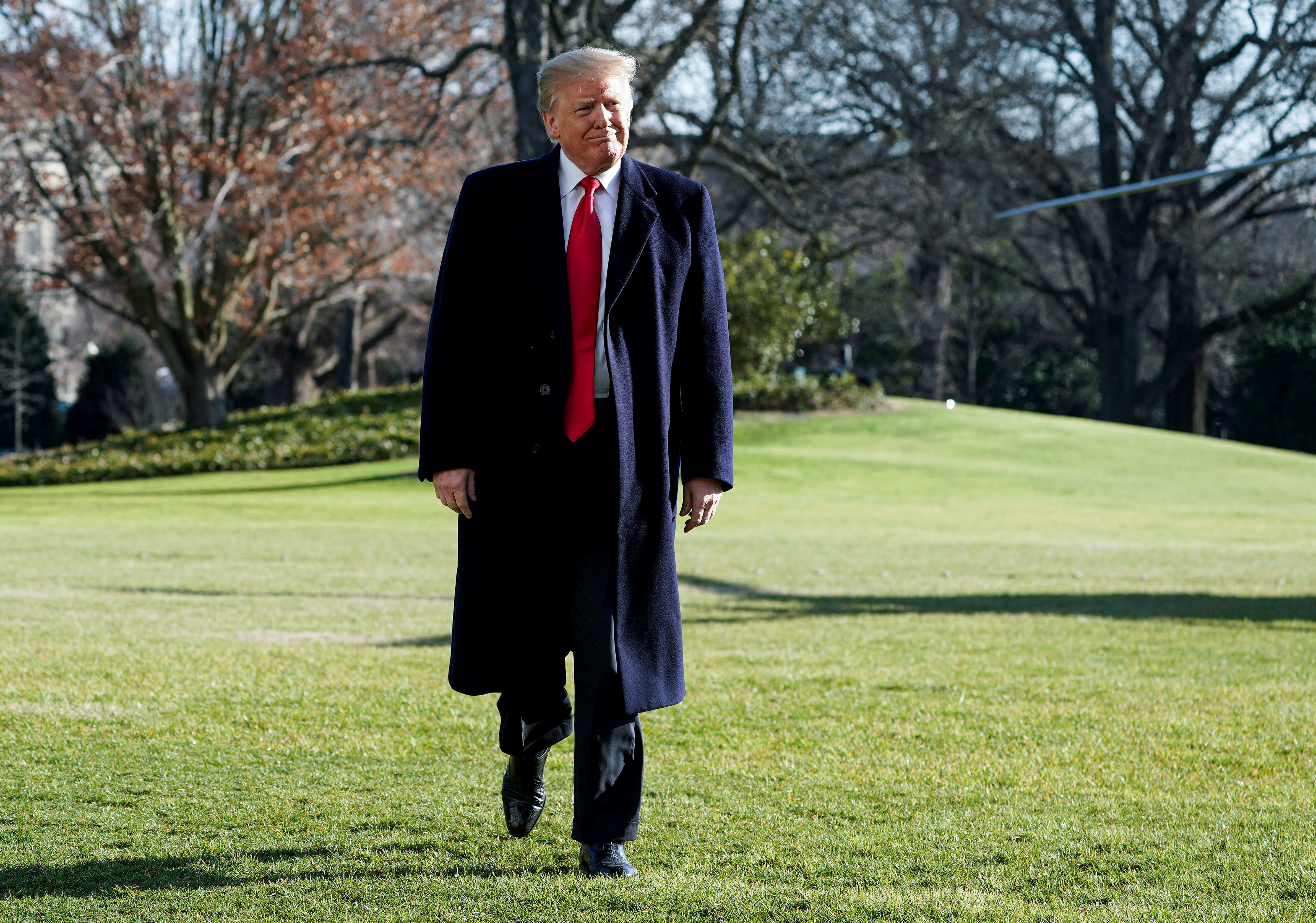 By Steve Holland and Ginger Gibson

The shutdown dragged into its 25th day on Tuesday with neither Trump nor Democratic congressional leaders showing signs of bending on the topic that triggered it – funding for the wall Trump promised to build along the border with Mexico.

Trump invited a bipartisan group of members of Congress for lunch at 12:30 p.m. EST (1730 GMT) to discuss the standoff but the White House said Democrats turned down the invitation. Nine Republicans were expected to attend.

Trump is insisting Congress shell out $5.7 billion as about 800,000 federal workers go unpaid during the partial shutdown.

“It&rsquo;s time for the Democrats to come to the table and make a deal,” said White House spokeswoman Sarah Sanders.

House Democratic leaders said they did not tell members to boycott Trump’s lunch but had pressed those invited to consider whether the talks would be productive or produce a photo-op for the president.

The Trump administration had initially estimated the shutdown would cost the economy 0.1 percentage point in growth every two weeks that employees were without pay.

But on Tuesday, there was an updated figure: 0.13 percentage point every week because of the impact of work left undone by 380,000 furloughed employees as well as work left aside by federal contractors, a White House official said.

Trump ran for office in 2016 on a promise to build a wall to stop illegal immigration and drug trafficking. He had toyed with the prospect of declaring a national emergency to circumvent Congress to secure the funding, but this week has backed off from that idea, which would attract a court challenge.

They have also insisted that Trump and Republicans reopen government before negotiations occur.

“We can keep on the pressure on negotiations over (border) security but it is long past time that we reopen the government, and make sure it is not federal employees, their families and businesses that are being held hostage,” said Democrat Representative Katherine Clark.

McConnell, who has mainly stayed out of the public fray on the shutdown, on Tuesday accused Democrats of “acrobatic contortions” to avoid negotiating on the shutdown.