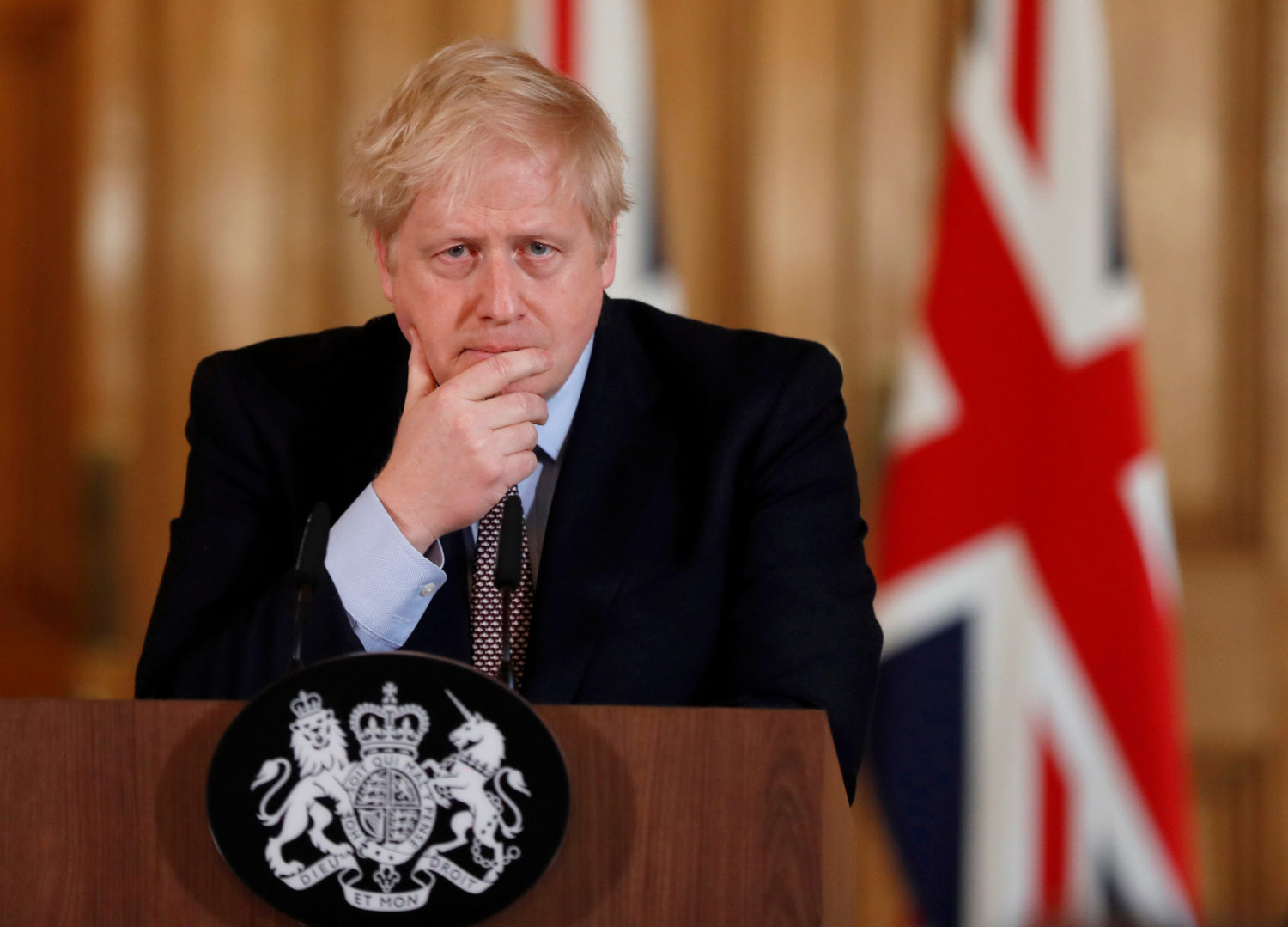 By Andy Bruce and Alistair Smout

LONDON (Reuters) – Prime Minister Boris Johnson continues to make progress, four days after being admitted to hospital with COVID-19, but he remains in intensive care as officials signalled there was no end in sight to an unprecedented national lockdown.

Johnson, 55, was admitted to St Thomas’ Hospital on Sunday evening with a persistent high temperature and cough, and was rushed to intensive care on Monday where he has since spent three nights receiving treatment.

Ministers have said he has been sitting up in bed and talking to medical staff.

“He’s still in intensive care but he continues to make positive steps forward and he’s in good spirits,” Foreign Secretary Dominic Raab said at a news conference in Downing Street.

Raab, who is deputising for Johnson during the most stringent shutdown in Britain’s peacetime history, said he had not spoken to the prime minister since he was admitted to intensive care.

“I think it’s important, particularly while he’s in intensive care, to let him focus on the recovery. We in the government have got this covered,” Raab told a news conference.

Earlier on Thursday, a Downing Street spokesman said Johnson had received oxygen support, but was not put on a ventilator.

The UK death toll in hospitals from coronavirus now stands at 7,978, a rise of 881 on the day but a smaller increase than the 938 seen in Wednesday’s data.

With Johnson absent and the death toll still mounting, the British government is wrestling with two major issues – how to finance a vast increase in state spending to support the shuttered economy, and when to start easing lockdown measures.

With the economy facing potentially the worst hit since World War Two, the government said it had expanded its overdraft facility with the Bank of England.

The central bank has agreed temporarily to finance government borrowing in response to COVID-19 if funds cannot immediately be raised from debt markets, reviving a measure last widely used during the 2008 financial crisis.

The BoE said it was a short-term measure and both it and government said any borrowing from the Ways and Means facility – effectively the government’s overdraft with the Bank – would be repaid by the end of the year.

The government has made pledges costing tens of billions of pounds to support businesses and workers hit by the virus. On Thursday, the government said an additional 1.2 million claims for welfare payments had been filed since March 16.

NO END TO LOCKDOWN

Raab said the peak of the virus outbreak had yet to be reached and that the government would not be able to say more about the duration of the lockdown until late next week, once experts have had chance to analyse data on how well it is working. It was introduced last month.

“The measures will have to stay in place until we’ve got the evidence that clearly shows we’ve moved beyond the peak,” he said.

While Johnson’s condition was said to be improving, it was unclear how long he might be incapacitated, with some political commentators saying there was a power vacuum in his absence.

Raab said on Thursday he had the power to make “necessary decisions” in the prime minister’s absence and that government will continue to follow the strategy set out by Johnson. He said cabinet could take decisions collectively.

The United Kingdom is entering what scientists say is the deadliest phase of the outbreak, with deaths expected to continue to rise over the Easter weekend.

But in a sign the shutdown measures were working, health officials have said the number of coronavirus infections and hospital admissions had begun to show signs of flattening.

“We’ve always been clear that it would take a period of time to see the impact of those measures in the statistics that we publish every day,” Johnson’s spokesman said.

“We’ve always said that if the scientific advice suggests further steps are needed we’d be prepared to take them, but for now our focus is on ensuring the steps we already have in place are properly enforced.”

Police said they would be taking tougher action to do just that before the four-day Easter holiday weekend because many people were continuing to ignore the ban on social gatherings. 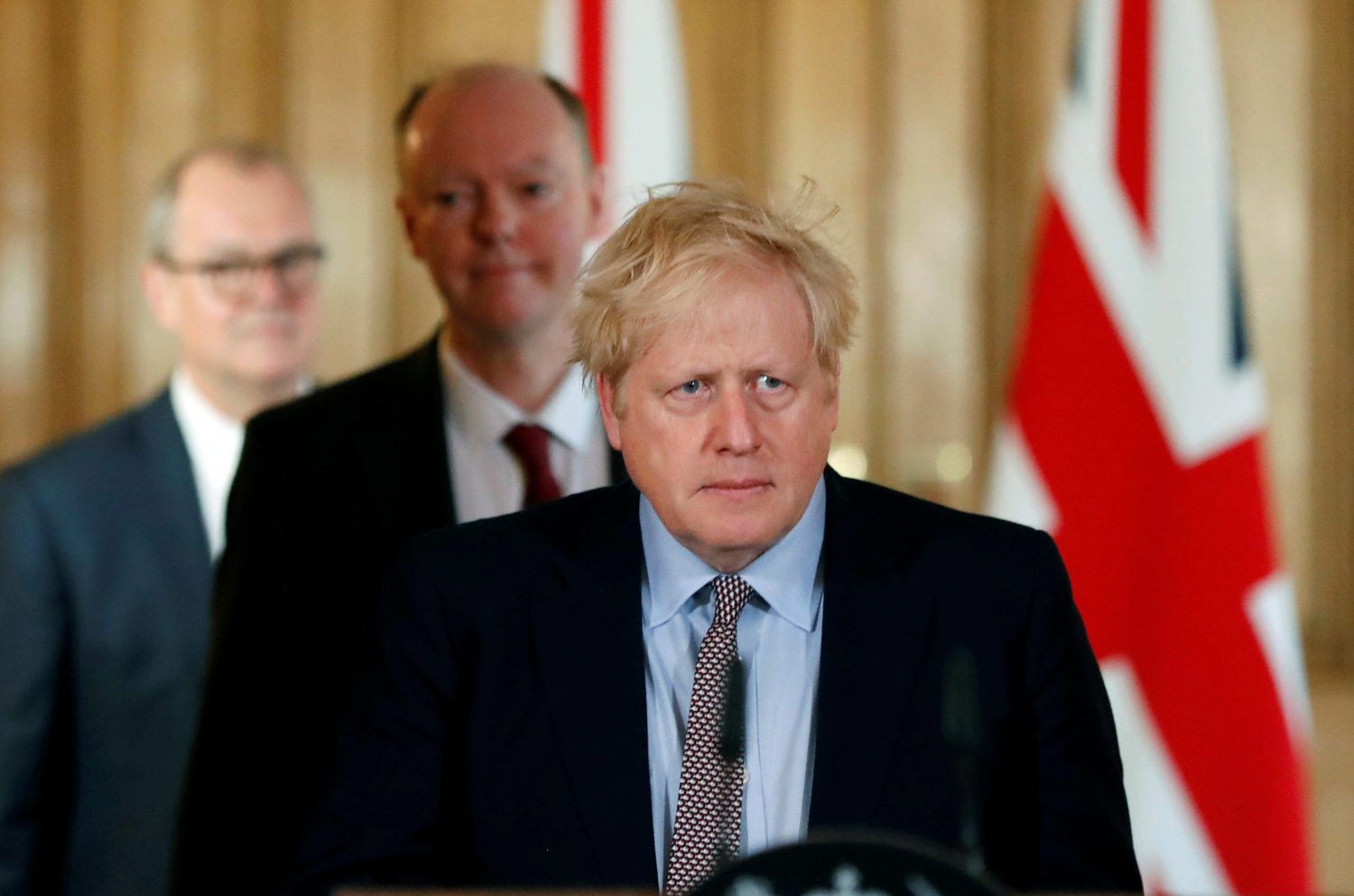 LONDON (Reuters) – British Prime Minister Boris Johnson was “clinically stable” in intensive care on Wednesday and responding to treatment for COVID-19 complications, amid questions about how key coronavirus crisis decisions would be made in his absence.

Johnson, who tested positive nearly two weeks ago, was admitted to St Thomas’ hospital on Sunday evening with a persistent high temperature and cough but his condition deteriorated and he was rushed into an intensive care unit.

The 55-year-old British leader has received oxygen support but was not put on a ventilator and his designated deputy, Foreign Secretary Dominic Raab, said he would soon be back at the helm as the world faces one of its gravest public health crisis in a century.

Downing Street said that Johnson was not working, but was able to contact people if needed.

“The prime minister remains clinically stable and is responding to treatment. He is in good spirits,” Johnson’s spokesman said, similar to what Downing Street has been saying over the past two days.

As Johnson battled the novel coronavirus in hospital, the United Kingdom was entering what scientists said was the deadliest phase of the outbreak and grappling with the question of when to lift the lockdown.

Inside the government, ministers were debating how long the world’s fifth-largest economy could afford to be shut down, and the long-term implications of one of the most stringent set of emergency controls in peacetime history.

The United Kingdom’s total hospital deaths from COVID-19 rose by a record 786 to 6,159 as of 1600 GMT on April 6, the latest publicly available death toll, though just 213,181 people out of the population of around 68 million have been tested.

Britain was in no position to lift the shutdown as the peak of the outbreak was still over a week away, London Mayor Sadiq Khan said.

“We are nowhere near lifting the lockdown,” Khan said.

Johnson was breathing without any assistance and had not required respiratory support, said Raab, who said the prime minister, whom he described as “a fighter”, remained in charge.

There are few precedents in British history of a prime minister being incapacitated at a time of major crisis, though Winston Churchill suffered a stroke while in office in 1953 and Tony Blair twice underwent heart treatment in the 2000s.

Johnson has delegated some authority to Raab, who was appointed foreign minister less than a year ago, though any major decisions – such as when to lift the lockdown – would in effect need the blessing of Johnson’s cabinet.

Britain’s uncodified constitution – an unwieldy collection of sometimes ancient and contradictory precedents – offers no clear, formal “Plan B”. In essence, it is the prime minister’s call and, if he is incapacitated, then up to cabinet to decide.

Raab said ministers had “very clear directions, very clear instructions” from Johnson but it was not clear what would happen if crucial decisions needed to be made which strayed from the approved plan.

Michael Heseltine, who served as deputy prime minister to John Major in the 1990s, told the Telegraph Raab’s position needed to be clarified.

Former Foreign Secretary Malcolm Rifkind said most major decisions over the coronavirus strategy had been taken with the important exception of whether or not to ease the lockdown, a call that will need to be made in the next week or soon after.

“That is not just a medical judgement. It has to be a balance between the medical considerations and the consequences of leaving the whole economy shut down,” Rifkind told BBC TV.

While such a decision would be made by cabinet even if Johnson were not unwell, he said Britain’s prime minister had authority and sway as the “primus inter pares” – Latin for “first among equals” – others did not.

“He very often can steer the direction in a particular way. Dominic Raab doesn’t have the authority nor would he claim it,” Rifkind said. 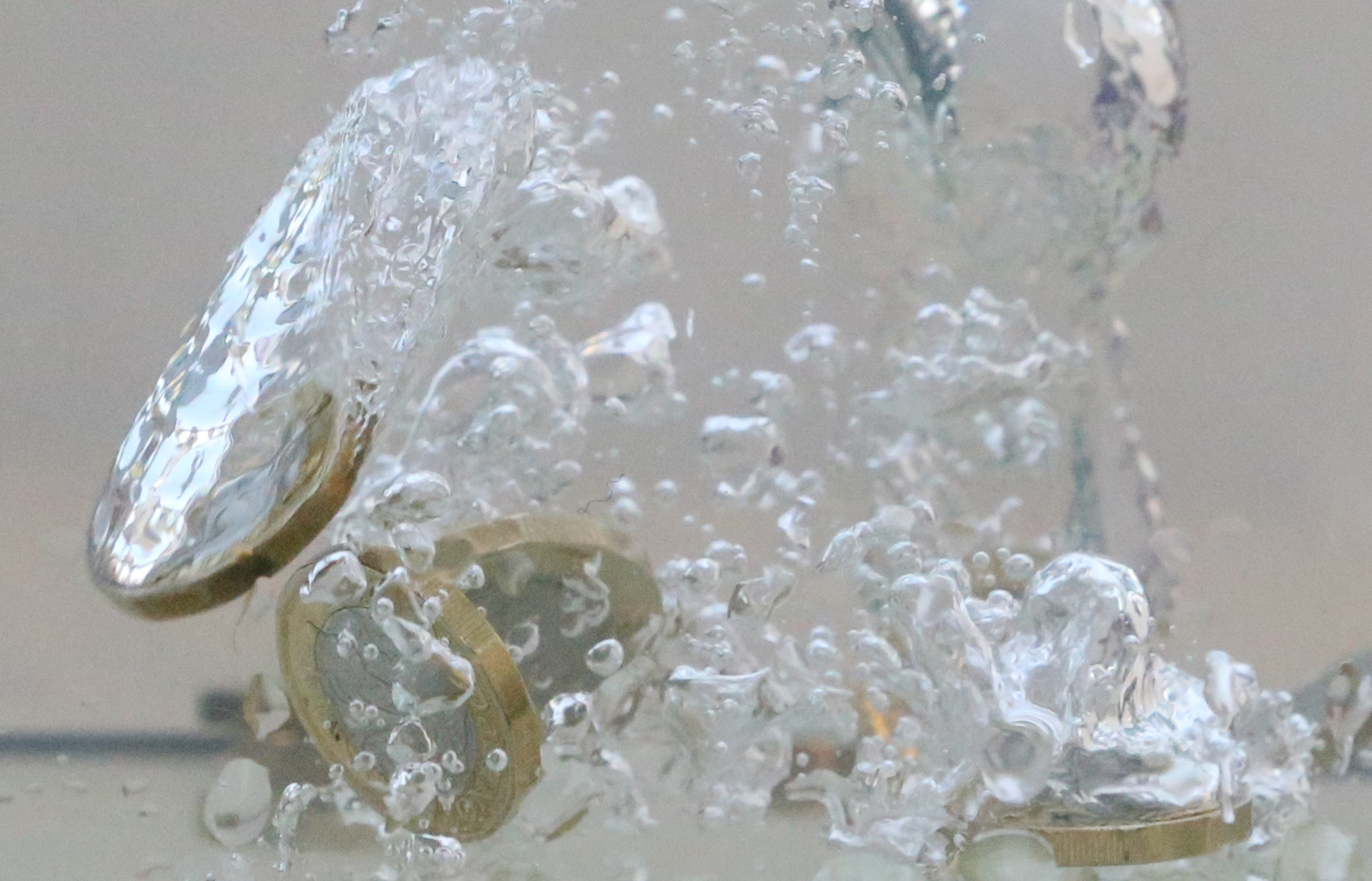