While other data on Thursday showed the number of Americans filing applications for unemployment benefits increased more than expected last week, the underlying trend in claims remained low. Claims data tend to be volatile around year-end holidays.

Labor market data is being closely watched for signs of whether tightening financial conditions could be impacting on companies’ hiring decisions. A sharp stock market sell-off has stoked fears about the economy’s health.

The ADP report, which is jointly developed with Moody’s Analytics, was published ahead of the government’s more comprehensive employment report for December scheduled for release on Friday.

The ADP report has a spotty record predicting the private-payrolls component of the government’s employment report and last month’s jump probably exaggerates the strength of the labor market.

“The December ADP data have been especially unreliable because of the challenge of adjusting for ‘purging’ effects,” said Jim O’Sullivan, chief U.S. economist at High Frequency Economics in White Plains, New York.

“December is typically when employers drop from their listings all individuals who have left their firms permanently,” he said. “Such workers are dropped from the government data when they are no longer being paid, but some employers keep former employees on their lists for ADP until year-end tax documents have been filed.”

According to a Reuters survey of economists, nonfarm payrolls likely increased by 177,000 jobs last month after rising 155,000 in November. The unemployment rate is forecast steady near a 49-year low of 3.7 percent, not too far from the Federal Reserve’s forecast of 3.5 percent by the end of 2019.

With the labor market viewed at being at or beyond full employment, the pace of job growth is slowing as employers struggle to find workers. Some of the moderation in employment gains has been attributed to the stock market rout.

The Fed raised interest rates last month for the fourth time in 2018, but forecast fewer rate hikes this year and signaled its tightening cycle is nearing an end in the face of financial market volatility and slowing global growth.

In a separate report on Thursday, the Labor Department said initial claims for state unemployment benefits rose 10,000 to a seasonally adjusted 231,000 for the week ended Dec. 29. Data for the prior week was revised higher to show 5,000 more applications received than previously reported.

Economists polled by Reuters had forecast claims increasing to 220,000 in the latest week.

A Labor Department official said there was no indication of an increase in filings last week from federal workers furloughed because of a partial shutdown of the government that is now in its second week.

Data on claims filed by federal employees is released with a one-week lag. The shutdown, which started on Dec. 22, was triggered by President Donald Trump’s demand for $5 billion in border wall funding.

Some 800,000 employees from the Departments of Homeland Security, Transportation, Commerce and others have been furloughed or are working without pay.

Claims data tends to be noisy around year-end holidays. The four-week moving average of initial claims, considered a better measure of labor market trends as it irons out week-to-week volatility, slipped 500 to 218,750 last week. 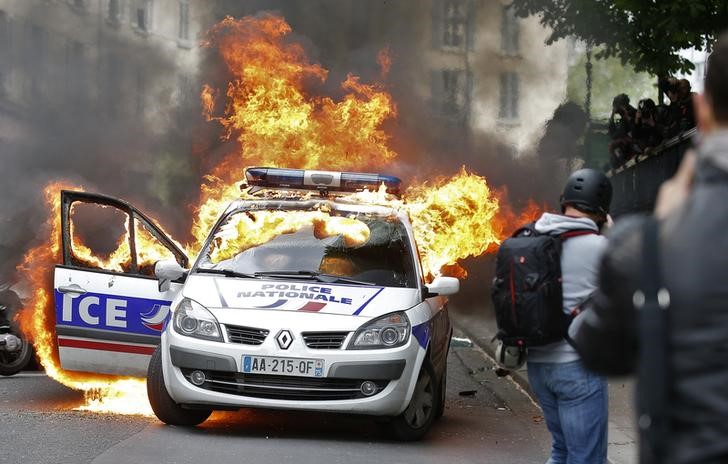 After weeks of protests in which hundreds of their number have been hurt, police held a rally of their own to vent frustration over the stresses of near daily clashes with violent youths on the fringes of the anti-reform movement.

As they did so, a crowd chanting “police everywhere, justice nowhere” surrounded a police patrol car, which went up in flames after the police officers inside fled the scene, a few hundred meters from where their colleagues were rallying.

The public prosecutor’s office said after the incident it was opening an inquiry into attempted homicide.

Strike turnout, the SNCF said, was about 15 percent, lower than in previous stoppages.

Truckers maintained blockades set up on Tuesday in a bid to strangle deliveries in and out of fuel and food distribution depots.

At issue is one of Hollande’s flagship reforms a year from a presidential election – law changes designed to make it easier for employers to hire and fire staff and to opt out of cumbersome national rules in favor of in-house accords on pay.

Hollande says the change will encourage firms to recruit and combat an unemployment rate that has remained above 10 percent.

The 61-year-old leader has said he will not consider running for re-election if he fails to make inroads against joblessness. Critics say the reform will totally undermine the standards of protection enshrined for decades in national labor law.

The plan, which pollsters say is opposed by three in four French people, has provoked weeks of often violent protests.

It has also increased pressure on police who were already stretched by extra duties following last November’s deadly militant Islamist attacks on France and are also gearing up for the Euro 2016 soccer tournament that kicks off on June 10.

Condemning what it described as mounting “anti-cop hatred”, the Alliance police union called for Wednesday’s rally in the Place de la Republique, a central Paris square that has seen regular skirmishes in past weeks between riot police and youths hurling petrol bombs and paving stones.

Paris police chief Michel Cadot banned a counter-protest by a group that accuses the police of brutality.

Interior Minister Bernard Cazeneuve defended the police and said 350 of them had been injured in standoffs that had produced 1,300 arrests in just two months.

Further strikes and protests are planned for the rest of the week in what labor unions, along with a youth protest movement called Nuit Debout or Night Rising, hope will prove a big enough show of force to make Hollande reconsider.