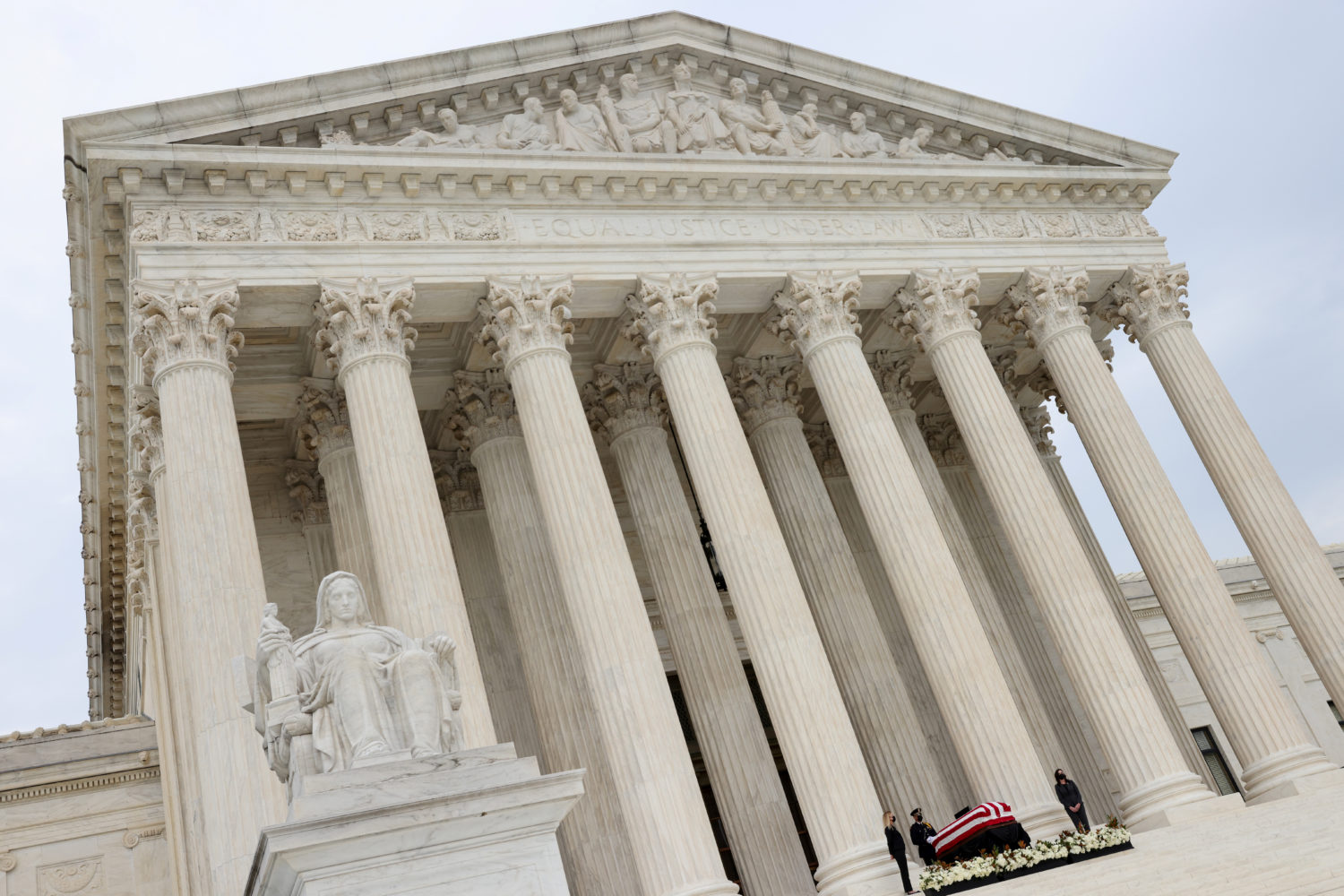 WASHINGTON (Reuters) – Amid a flurry of major rulings early this summer, the U.S. Supreme Court in an under-the-radar case handed a significant win to Native Americans by finding for the first time that almost half of Oklahoma is tribal land.

The ruling was a 5-4 decision in which conservative Justice Neil Gorsuch joined the four liberal justices, one of a handful of such surprise victories by the liberal wing of the court in recent terms.

The death of liberal Justice Ruth Bader Ginsburg and her possible replacement by a conservative appointed by President Donald Trump imperil such unlikely liberal wins in coming years.

The 5-4 conservative majority before Ginsburg’s death meant that the liberals on certain key issues only needed one conservative colleague siding with them.

Now, if Trump replaces her, they would need two, with likely implications for headline-grabbing issues on which liberals have prevailed in recent years, including abortion and gay rights, as well as lesser-known cases.

“The stars would have to line up,” said John Elwood, a Supreme Court lawyer.

The last two Supreme Court terms have defied expectations with a series of 5-4 rulings in which Chief Justice John Roberts joined the liberals in ruling against Trump’s bid to add a citizenship question to the U.S. census, blocking the president’s effort to rescind protections for young immigrants known as “Dreamers” and striking down a Louisiana abortion restriction.

But there are also several lesser-noticed 5-4 rulings that would have been unlikely with a 6-3 conservative majority.

The Oklahoma ruling was one. It is one of three 5-4 cases on Native American issues in which Gorsuch, who was appointed by Trump, joined the four liberals in the majority.

Similarly, Gorsuch two years ago was the fifth vote for the liberal wing of the court in striking down part of an immigration law that made it easier to deport people convicted of certain criminal offenses. He also cast the deciding vote that year in two 5-4 criminal cases in favor of defendants.

Last year, Justice Brett Kavanaugh, another conservative appointed by Trump, joined the four liberals in a 5-4 ruling that gave the greenlight to an antitrust lawsuit accusing Apple Inc of forcing consumers to overpay for iPhone software applications.

In an important case on evolving privacy rights in the age of the smartphone, Roberts and the four liberals prevailed in another 5-4 case in 2018 as the court imposed limits on the ability of police to obtain cellphone data pinpointing the past location of criminal suspects.

Whether the three liberals will be able to cobble together a majority in similar cases in future depends in large part on the identity of Trump’s nominee.

Trump has said he intends to announce his nomination on Saturday, with conservative appeals court judges Amy Coney Barrett and Barbara Lagoa considered the frontrunners to be named to succeed Ginsburg, who died last Friday at age 87. The Republican-controlled Senate, which has to vote on whether to approve or reject the nomination, is poised to act even ahead of Nov. 3, when Trump is seeking re-election.

Carolyn Shapiro, a professor at Chicago-Kent College of Law, said that even before Ginsburg’s death, the 5-4 cases in which liberals prevailed were contingent on the individual legal reasoning of the conservative who joined them. It might be possible to win certain cases with a 6-3 majority, she added, but it will be harder.

“Those occasions are likely to be fairly idiosyncratic and mostly unpredictable,” Shapiro said.

One area where liberal votes may still be key is on LGBT rights. In June, the court to the dismay of conservatives ruled 6-3 that federal law that outlaws sex discrimination in the workplace applies to gay, lesbian and transgender people.

In that case, both Roberts and Gorsuch were in the majority with the liberals, so even with Ginsburg’s absence, five of the votes in favor of LGBT workers remain on the court. Other cases on the definition of sex discrimination under other federal laws are likely to reach the court soon.

Shannon Minter, a lawyer with the National Center for Lesbian Rights, said he is “hopeful” that the majority remains intact but noted that every time there is a change in personnel on the court it can change the internal dynamic in unpredictable ways.

As such, he added, “Ginsburg’s absence is a significant factor.” 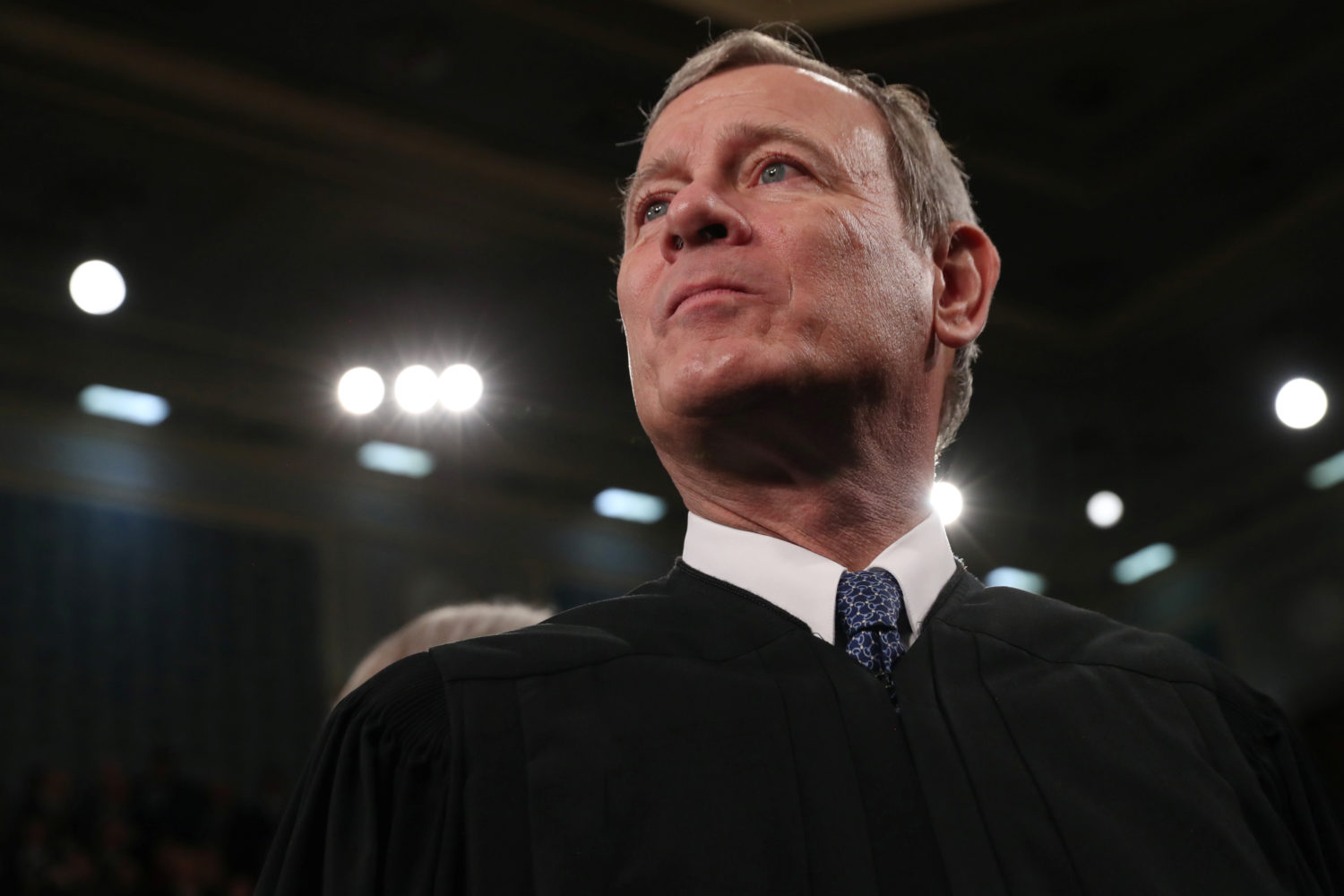 By Jan Wolfe and Lawrence Hurley

Schumer earlier on Wednesday assailed Justices Brett Kavanaugh and Neil Gorsuch, saying they “won’t know what hit” them if they rule in favor of abortion restrictions.

“Justices know that criticism comes with the territory, but threatening statements of this sort from the highest levels of government are not only inappropriate, they are dangerous,” Roberts said in a statement.

“All members of the court will continue to do their job, without fear or favor, from whatever quarter,” Roberts added.

“This is a direct & dangerous threat to the U.S. Supreme Court by Schumer. If a Republican did this, he or she would be arrested, or impeached. Serious action MUST be taken NOW!” Trump said on Twitter.

Roberts in November 2018 criticized Trump after the president called a judge who ruled against one of his immigration policies an “Obama judge.”

Schumer’s remarks were made during an abortion rights rally held while the nine-member court heard arguments in an abortion case from Louisiana. Roberts could be the pivotal vote.

In his speech, Schumer noted that this was the Supreme Court’s first major abortion case since Trump appointed Kavanaugh in 2018 and Gorsuch in 2017. The crowd jeered when Schumer mentioned the two names.

“I want to tell you Gorsuch, I want to tell you Kavanaugh – you have released the whirlwind, and you will pay the price. You won’t know what hit you if you go forward with these awful decisions,” Schumer told the cheering crowd.

Schumer spokesman Justin Goodman noted in a statement that Roberts did not comment when Trump last month turned his ire on liberal Supreme Court Justices Ruth Bader Ginsburg and Sonia Sotomayor, calling for them to recuse themselves from any cases involving him or his administration.

He added that Schumer was referring to the “political price” Republicans will pay for putting Kavanaugh and Gorsuch on the court and “warning that the justices will unleash (a) major grassroots movement on the issue of reproductive rights against the decision.”

Democrats have criticized Trump’s frequent attacks on the U.S. judiciary and individual judges, including the one who presided over the trial of his longtime adviser Roger Stone. 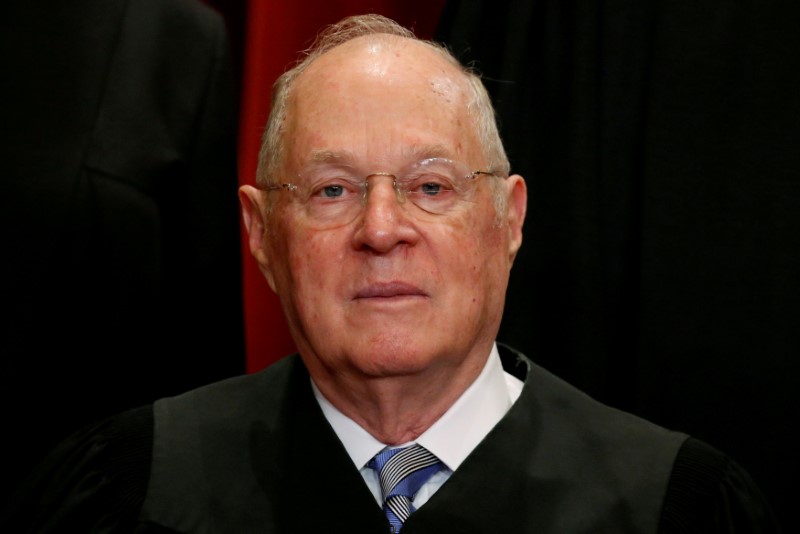 The conservative Kennedy, who turns 82 in July and is the second-oldest justice on the nine-member court, has become one of the most consequential American jurists since joining the court in 1988 as an appointee of Republican President Ronald Reagan. He proved instrumental in advancing gay rights, buttressing abortion rights and erasing political spending limits. His retirement takes effect on July 31, the court said.

“It has been the greatest honor and privilege to serve our nation in the federal judiciary for 43 years, 30 of those years on the Supreme Court,” Kennedy said in a statement.

The statement issued by the court said that Kennedy’s decision was motivated by his decision to spend more time with his family.

Kennedy is a traditional conservative who sometimes joined the liberal justices on key rulings, earning a reputation as the court’s “swing” vote who heartened conservatives and liberals alike, depending on the issue. Kennedy on Tuesday joined the court’s four other conservatives in giving Trump a huge legal victory by upholding the Republican president’s travel ban targeting people from several Muslim-majority countries.

Kennedy’s decision was disclosed on the final day of the court’s current term, which began in October. On Wednesday, he joined his fellow conservative justices in a 5-4 ruling that dealt a major setback to organized labor by shutting off a key union revenue source.

Trump on Wednesday said Kennedy had great vision and heart. The president said he will begin a search immediately for a new justice, with a list of 25 candidates. The Republican-led Senate can be expected to push to have the new nominee confirmed and on the court before the justices begin their next term in October.

Trump already has left an imprint on the court, restoring its 5-4 conservative majority with the appointment of Justice Neil Gorsuch last year after the president’s fellow Republicans in the Senate in 2016 refused to consider Democratic former President Barack Obama’s nominee, Merrick Garland.

While Kennedy’s replacement will not change the numerical ideological balance on the court, Trump could appoint a justice who would be more staunchly conservative than Kennedy and less likely to occasionally side with the court’s liberal wing.

Without Kennedy on the bench, the high court could move to the right on major social issues including abortion and gay rights. Kennedy wrote the landmark 2015 ruling that legalized same-sex marriage nationwide.

Conservative activists have long dreamed of building a firmly conservative majority on the court that would push to overturn the landmark 1973 ruling in the case Roe v. Wade that legalized abortion nationwide.

Gorsuch already has demonstrated that he is one of the most conservative members of the court, aligning himself with Justices Clarence Thomas and Samuel Alito. [nL1N1OE2GT]

The U.S. Senate, which must confirm nominees before they can join the court, is controlled 51-49 by Trump’s fellow Republicans, meaning that if they remain unified they can overcome any Democratic opposition like that mounted against Gorsuch. Senate Republicans changed the chamber’s rules during the Gorsuch nomination battle to prevent Democrats from insisting on a 60-vote super-majority, allowing court nominees to win confirmation by a simple majority vote.

Kennedy personally delivered his retirement letter to the White House on Wednesday afternoon, after he told his fellow justices of his plans at their afternoon conference.

Trump picked Gorsuch from a list of names, mostly conservative federal appeals court judges, he circulated during his 2016 election campaign. The White House last November issued an expanded list that includes other prominent conservatives, including Judge Brett Kavanagh, a former Kennedy law clerk who serves on the U.S. appeals court in Washington.

While Kennedy sided with conservative colleagues on many issues and authored the landmark 2010 ruling that allowed unlimited corporate spending in political campaigns, his tenure also included strong support for the liberal cause of gay rights.

Kennedy was Reagan’s third choice to fill the court seat left open by the retirement of Lewis Powell in 1987. The Senate rejected Reagan’s first nominee, outspoken conservative Robert Bork, in a fierce partisan fight and second choice Douglas Ginsburg withdrew after admitting to past marijuana use. 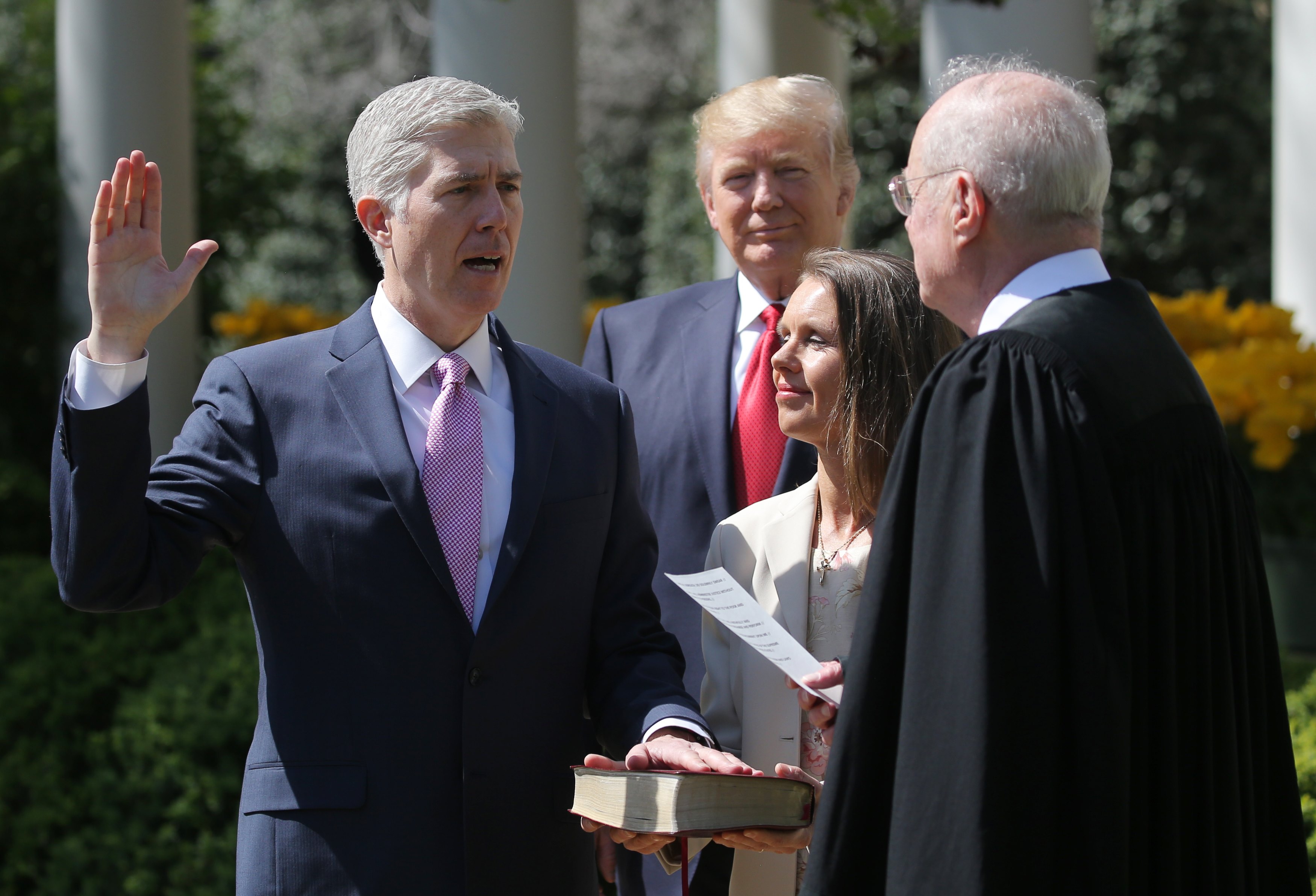 We are so excited and thank God for this day. This is the reason we elected President Trump. Let us pray for the safety and blessing of God upon Justice Neil Gorsuch!