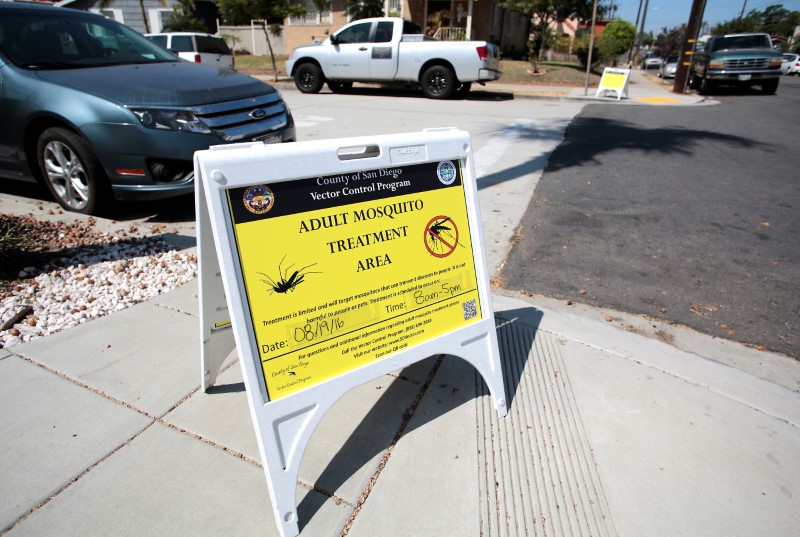 NEW YORK (Reuters) – The number of Americans sickened each year by bites from infected mosquitoes, ticks or fleas tripled from 2004 through 2016, with infection rates spiking sharply in 2016 as a result of a Zika outbreak, U.S. health officials said on Tuesday.

The U.S. Centers for Disease Control and Prevention said that some 96,075 diseases caused by bites by mosquitoes, ticks and fleas were reported in 2016, up from 27,388 in 2004, in an analysis of data from the CDC’s National Notifiable Diseases Surveillance System.

Infections in 2016 went up 73 percent from 2015, reflecting the emergence of Zika, which is transmitted by mosquitoes and can cause severe birth defects. Zika was the most common disease borne by ticks, mosquitoes and fleas reported in 2016, with 41,680 cases reported, followed by Lyme disease, with 36,429 cases, almost double the number in 2004.

The increases may be a result of climate change, with increased temperatures and shorter winters boosting populations of ticks, mosquitoes and other disease-carrying creatures known as “vectors.”

“It enables these ticks to expand to new areas. Where there are ticks, there comes diseases,” said Lyle Petersen, director of the CDC’s Division of Vector-Borne Diseases.

While Zika stood out as the latest emerging threat in the report, it also showed a long-term increase in cases of tick-borne Lyme disease, which can attack the heart and nervous system if left untreated.

Researchers warned that their numbers likely do not include every case as many infections are not reported.

These increases are due to many factors, including growing populations of the insects that transmit them and increased exposure outside of the United States by travelers who unknowingly transport diseases back home.

The CDC said more than 80 percent of vector-control organizations across the United States lack the capacity to prevent and control these fast-spreading, demanding illnesses. Petersen said that federal programs are increasing funding for those organizations.

A new report from the Centers for Disease Control (CDC) shows an astronomical rise in Lyme Disease in the United States.

“Over time, the number of counties identified as having high incidence of Lyme disease in the northeastern states increased more than 320 percent,” researchers write in the report.

The researchers also noted that the disease has now appeared in states where cases had never previously been recorded by the CDC.

The study also shows that there are now twice the number of counties in the United States where contraction of Lyme Disease is twice the national average.  Most of those counties are in the New England states and in Wisconsin.  The entire state of Connecticut is considered high risk for the disease.

More than 30,000 cases of Lyme disease are reported to the CDC each year.  The disease is the most common tick-borne illness.  However, the CDC says that number of cases could be significantly higher than the amount reported, up to ten times the number or 300,000 infected people.

“This new preliminary estimate confirms that Lyme disease is a tremendous public health problem in the United States, and clearly highlights the urgent need for prevention,” says Dr. Paul Mead, chief of epidemiology and surveillance for CDC’s Lyme disease program, based in Ft Collins, Colo.

Up to 20 percent of patients who contract Lyme disease have long term symptoms according to the CDC.

Doctors are sounding the alarm about Lyme Disease and the fact it’s beginning to spread nationwide.

“This is a real public health threat,” said Lyme Disease expert Dr. Richard Horowitz.  “We have to realize that this has spread.  It’s imitating all of these different diseases.  And people really need to understand the signs and symptoms and the unreliability of the blood test.”

Dr. Horowitz is trying to raise awareness of Lyme’s ability to mimic other diseases and because of the blood test’s tendencies to return false negatives, the importance of doctors and nurses looking at the symptoms to consider if Lyme is possible despite the test.

He gave the example of a Philadelphia area man named John who was a healthy landscape worker just four years ago.  He began to experience muscle twitching and eventually was unable to walk or feed himself.  It was only after he developed co-infections to Lyme disease such as Rocky Mountain spotted fever that doctors were able to confirm Lyme.

By then, it was too late for him to be treated by antibiotics and chronic Lyme had set in.  Now, John has to take about 60 pills a day for his condition.

Dr. Horowitz believes that the potential cause of long term Lyme is that the body’s ability to filter toxins is damaged.  Currently he is running studies to see if filtering toxins from the blood can help long term Lyme patients.

Ticks around San Francisco, California have been discovered to be carrying a newly discovered bacterium with unknown health effects.

The Stanford University study said that the bacteria, Borrelia miyamotoi, have been found on ticks that were also carrying the bacteria that cause Lyme disease.  The study is due to be published in the March issue of Emerging Infectious Disease.

The researchers said the amount of ticks with both bacteria were very small, as little as two percent of the entire amount found during the study.  However, the bacteria was found on ticks in all of the 12 recreational areas around San Francisco that was part of the study.

The first human case of infection from B. miyamotoi was discovered in 2013 and other than the patient developing symptoms similar to Lyme disease, little was learned about the bacteria.

One researcher says that patients who are treated for Lyme disease and do not recover could likely be infected with the new bacteria.

The Centers for Disease Control says that Lyme cases are rising because doctors are more familiar with signs of the infection.

“There is a lot of different theories of Lyme disease increasing because of warming temperatures,” said Dr. Liza Whalen. END_OF_DOCUMENT_TOKEN_TO_BE_REPLACED