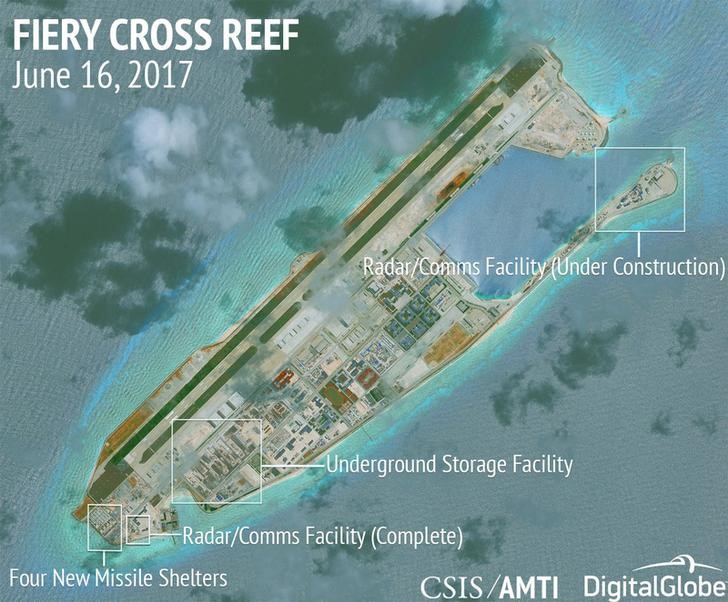 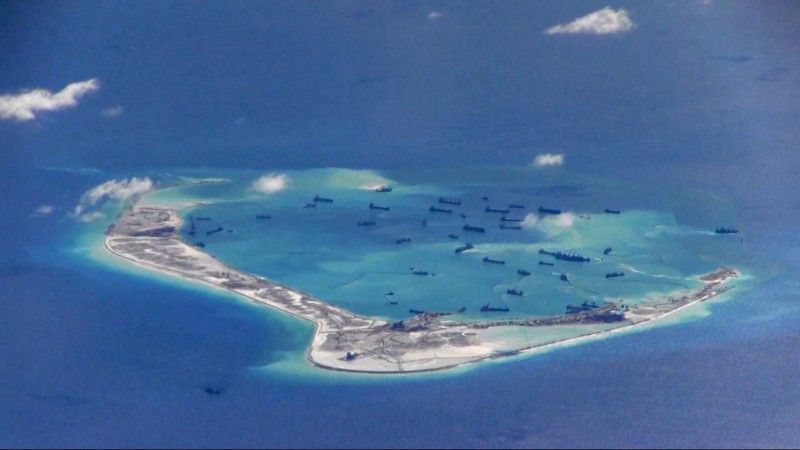 BEIJING (Reuters) – There was “no such thing” as man-made islands in the disputed South China Sea, China’s Defence Ministry said on Thursday, and reiterated that any building work was mainly for civilian purposes.

China, which claims most of the resource-rich region, has carried out land reclamation and construction on several islands in the Spratly archipelago, parts of which are also claimed by Brunei, Malaysia, the Philippines, Taiwan and Vietnam.

The building has included airports, harbors and other facilities, involving in some cases the dumping of massive amounts of sand to build up land on what were reefs or structures that may only have been exposed at low tide.

But ministry spokesman Wu Qian implied that was perhaps a misunderstanding, though he said there was construction work which China had every right to do as the Spratlys were inherent Chinese territory.

“There is no such thing as man-made islands,” Wu told a regular monthly news briefing. “Most of the building is for civilian purposes, including necessary defensive facilities.”

The South China Sea is generally stable at present, but some countries outside the region are anxious about this and want to hype things up and create tensions, Wu said, using terminology that normally refers to the United States.

Pressed to explain his comment that were no man-made islands, Wu declined to elaborate, saying China had already provided a full explanation of its construction work.

On Monday, a U.S. think tank said China appeared to have largely completed major construction of military infrastructure on artificial islands it has built in the South China Sea and can now deploy combat planes and other military hardware there at any time.

China has repeatedly denied charges it is militarizing the South China Sea, through which about $5 trillion in ship-borne trade passes every year. 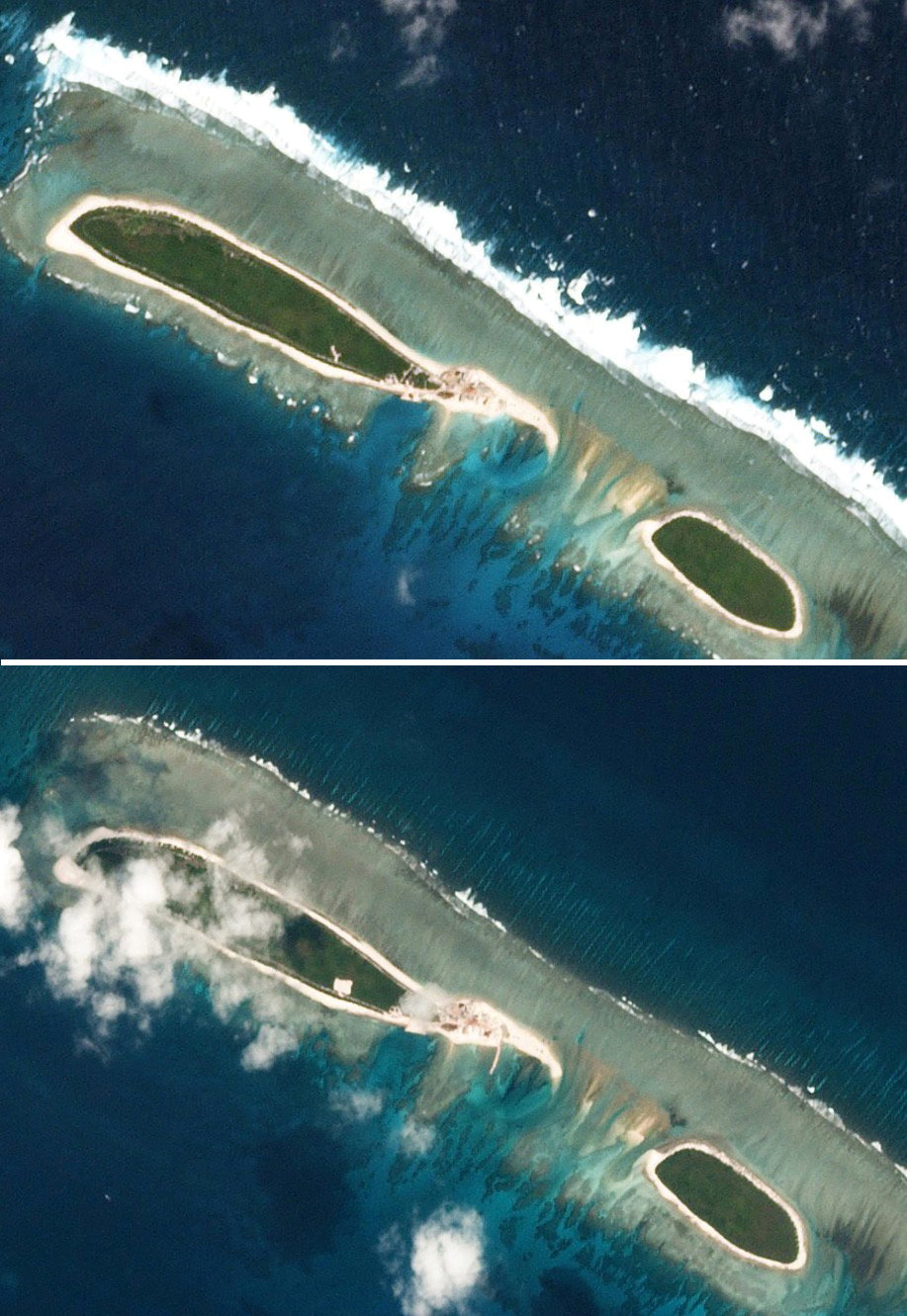 Regional military attaches and experts believe the work shows China’s determination to build up its network of reefs and islets, even if it is seeking to avoid a fresh confrontation with the new administration of U.S. President Donald Trump.

An image of North Island in the Paracels group taken on March 6 shows recent work including land clearing and possible preparation for a harbor to support what experts believe may be eventual military installations. Initial work was damaged in a typhoon last year.

The pictures, provided by private satellite firm Planet Labs, follow reports in January showing work undertaken on nearby Tree Island and other features in the Paracels, which are also claimed by Vietnam and Taiwan.

Diplomats briefed on latest Western intelligence assessments say Beijing is pursuing efforts to dominate its maritime ‘backyard’, even if it tweaks the timing of moves to avoid being overtly provocative.

“The Paracels are going to be vital to any future Chinese attempt to dominate the South China Sea,” said Carl Thayer, a South China Sea expert at Australia’s Defence Force Academy.

“We can see they are committed to militarization, whatever the official rhetoric tells us, even if they are going to do it bit by bit.”

The more widely disputed Spratlys archipelago to the south are higher profile but the Paracels are key to China’s presence in the South China Sea,

China has in recent years temporarily based surface-to-air missile launchers and crack jet fighters at long established bases on Woody Island on the Paracels, helping protect its nuclear submarine facilities on Hainan Island.

North Island is part of an arc of reefs that are expected to form a protective screen for Woody, which includes civilian facilities and a listening post.

Zhang Baohui, a mainland security expert at Hong Kong’s Lingnan University, said he believed China was pursuing long-held goals of strengthening its facilities in the Paracels, and had calculated the Trump administration would not over-react given other pressing priorities.

“There’s also uncertainty with this young Trump administration, but this is very important work to the Chinese…the Paracels are vital to defending Hainan, which is in turn important to China’s nuclear deterrent,” he said.

“The calculation here is that it is really only Vietnam that will be rattled by this.”

The Vietnamese Foreign Ministry did not immediately respond to requests for comment.

China’s Defence Ministry said it was “not familiar” with any work at North Island.

“What needs to be stressed is that the Xisha Islands are China’s inherent territory,” it said, using the Chinese name for the Paracels. China fully occupied the Paracels in 1974 after forcing the navy of the-then South Vietnam off its holdings.

News of fresh Chinese activity comes as Rex Tillerson prepares for his first visit to the region as U.S. Secretary of State later this week. Tillerson sparked alarm in Beijing when he said in January China should not be allowed access to islands it has built in the South China Sea.

A U.S. official, speaking on the condition of anonymity, was unable to confirm new construction work on North Island but said it would not be surprising.

“It would be in line with what they have been doing, why else would they clearing land on the islands but for militarization,” the official said. “There is no other reason to have a presence there.”

Diplomatic sources in Beijing say China is not looking for confrontation with the United States over the South China Sea, pointing to China’s low-key reaction to last month’s patrol of a U.S. aircraft carrier strike group in the waters there.

China has recently sought to portray itself as being conciliatory over the disputed waterway, saying it and Southeast Asian nations are committed to a peaceful resolution.

Last week, Chinese Foreign Minister Wang Yi said a draft code of conduct for behavior in the South China Sea had now been completed and that tensions had “distinctly dropped”.

For a graphic of China’s reclamations in the Paracels, click http://fingfx.thomsonreuters.com/gfx/rngs/SOUTHCHINASEA-CHINA/010040500BH/china-paracel.jpg

(Additional reporting by Ben Blanchard in BEIJING and Idrees Ali in WASHINGTON; Editing by Lincoln Feast)