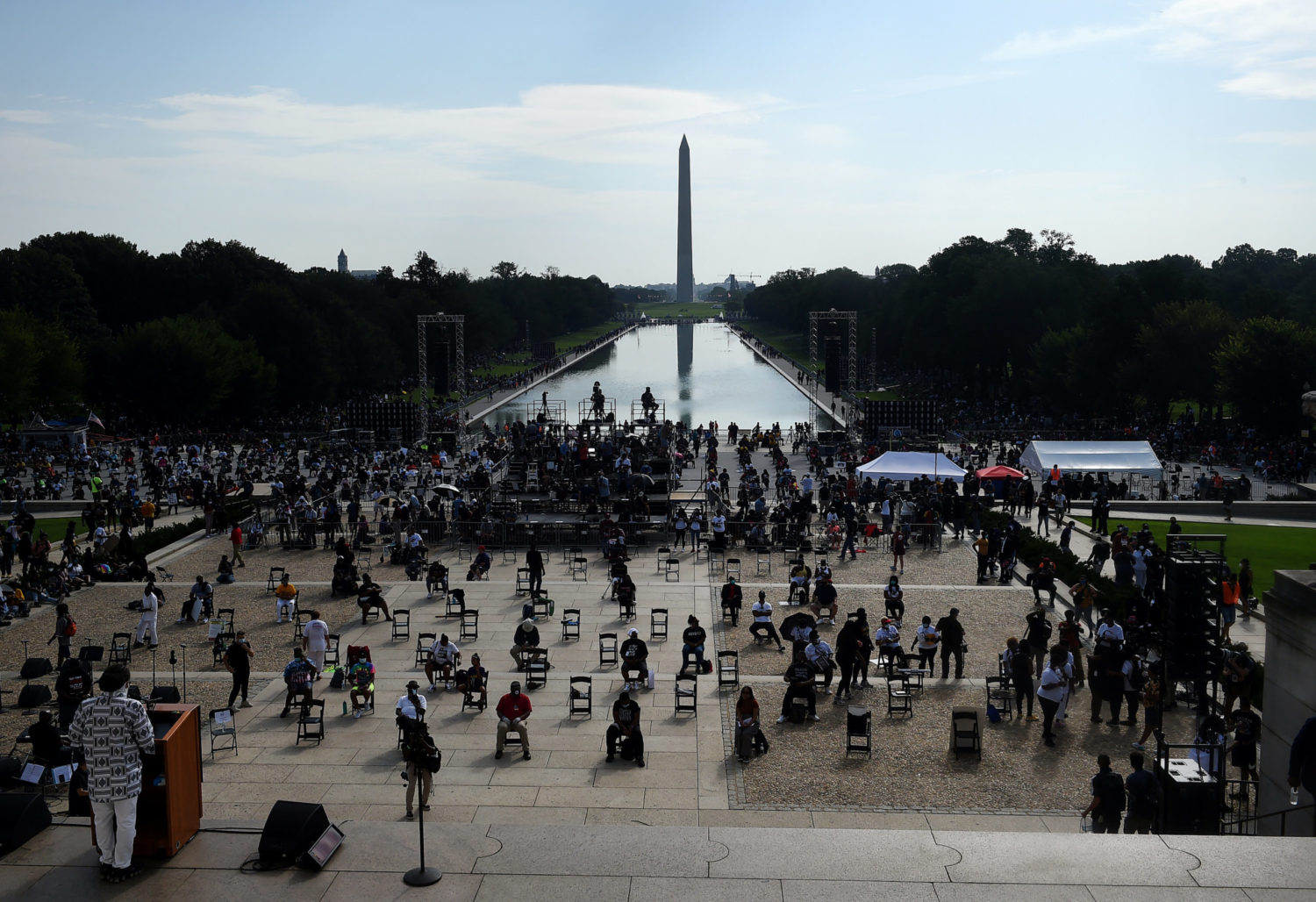 WASHINGTON (Reuters) – Tens of thousands of people were expected to march in Washington, D.C. on Friday to denounce racism, protest police brutality and commemorate the anniversary of the march in 1963 where civil rights leader Martin Luther King Jr. made his “I Have a Dream” speech.

In his historic and often-repeated speech, King envisioned a time his children would “one day live in a nation where they will not be judged by the color of their skin but by the content of their character.”

Its 57th anniversary comes at the end of a summer of racial unrest and nationwide protests, sparked by the death of George Floyd, an unarmed African American, after a Minneapolis police officer kneeled on his neck for nearly nine minutes.

Earlier this week, protests seized Kenosha, Wisconsin, after police officers shot another African-American man, Jacob Blake, multiple times in front of his young children while his back was turned. Blake survived the shooting, but has been paralyzed, his lawyers told reporters earlier this week.

Friday’s protest, called “Commitment March: Get Your Knee Off Our Necks,” was planned in the wake of Floyd’s death by civil rights activist Reverend Al Sharpton’s National Action Network.

Ben Crump, the civil rights lawyer representing Blake and Floyd’s family, will speak, as will Sharpton, members of Floyd’s family, and King’s son, Martin Luther King III, among others.

After speeches at the Lincoln Memorial, participants will walk to the Martin Luther King memorial about a half mile away.

This summer’s uprisings drew parallels to those seen in 1968, after King’s own murder, five years after his famous speech.

The march also comes as Black people suffered disproportionately from the coronavirus pandemic, which has killed about 180,000 Americans. Blacks have been more likely to be sickened and die from the virus and to lose jobs from the economic fallout.

Washington requires people coming from so-called coronavirus high-risk states, which currently includes both Wisconsin and Minnesota, to quarantine for 14 days when visiting the district.

Organizers say they are taking the pandemic into account by restricting access to buses from those states, distributing masks and checking temperatures. There will also be free COVID-19 testing provided at the event.

Washington Mayor Muriel Bowser, who received national attention when the district painted “Black Lives Matter” on the street steps away from the White House, has warned attendees that it may be difficult to socially distance during the march.

In addition to the live march, there will be a virtual commemoration featuring Reverend William Barber, a prominent civil rights activist and the co-chair of the Poor People’s Campaign. It will also include civil rights activists, politicians, artists and entertainers.

Kerrigan Williams, a founder of Freedom Fighters DC, said the group was organizing its own march on Friday after the March on Washington to promote a more radical agenda that includes replacing police departments with other public safety systems.

She said the group believes “the march on Washington is too reformist and performative for our taste.”

Separately, a wing of the Movement for Black Lives, a network of Black activists and organizations, has scheduled the “Black National Convention” on Friday night, following national conventions by the Democratic and Republican parties over the past two weeks.

The three-hour live streamed convention, which has been in the works since last fall, will feature about 100 Black activists and discussions about criminal justice and capitalism, said Jessica Byrd, an organizer for the event.

“We feel like it’s going to be a Black political Homecoming weekend,” she said. 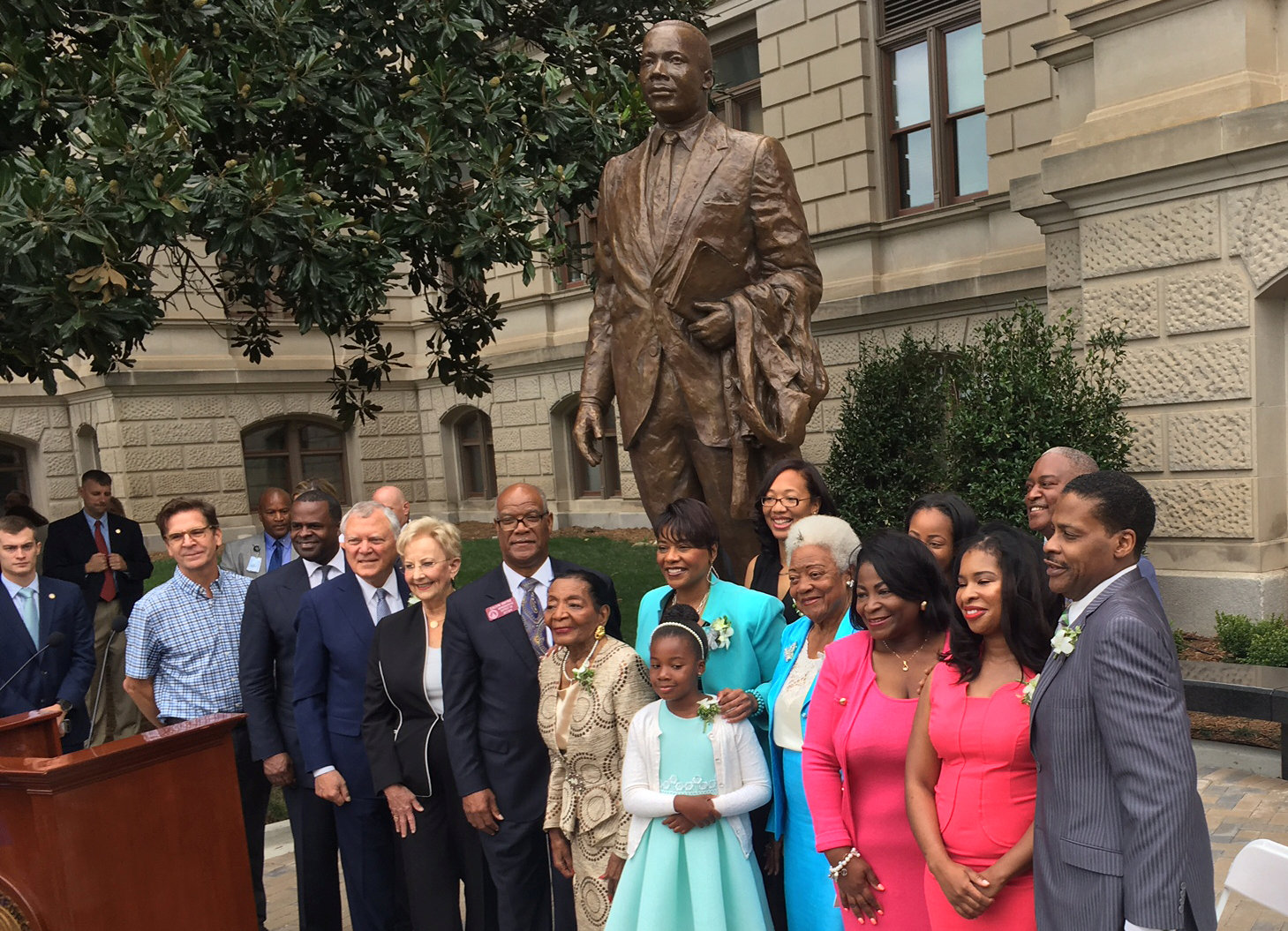 ATLANTA (Reuters) – Georgia on Monday unveiled a statue of the late civil rights leader Martin Luther King Jr. on the same capitol grounds in Atlanta where statues of segregationists remain.

The new installation comes amid an intensified debate in the United States over Confederate symbols after a woman was killed during an Aug. 12 protest by white supremacists in Charlottesville, Virginia, objecting to the planned removal of a statue of Confederate General Robert E. Lee.

The bronze King statue should provide a sense of hope, his daughter Bernice King told the several hundred people who attended the unveiling ceremony in the state that was part of the Confederacy during the U.S. Civil War.

The event on Monday was timed to coincide with the 54th anniversary of King’s “I Have a Dream” speech calling for racial justice and equality.

The civil rights leader said it was his dream that the sons of former slaves and former slave owners would one day sit down together in brotherhood.

King, a Nobel Peace Prize winner who was assassinated in 1968, was born a few blocks from the Georgia capitol. Although his portrait is on display inside the building, there had been no monuments to him on the Capitol grounds. The statue faces his birthplace.

The monument to King joins existing statues on capitol grounds of John B. Gordon, a Confederate military general; Joseph Brown, the state’s governor during the Civil War; and past Governor Eugene Talmadge, a staunch segregationist.

Georgia state officials in 2014 announced plans for the King statue a few months after they quietly relocated off capitol grounds a statue of Thomas Watson, a U.S. senator who died in 1922. Watson espoused bigoted attitudes towards African Americans, Catholics, and Jews, according to scholars.

“This day took much too long to get here,” said David Ralston, the Republican speaker of the Georgia House of Representatives. “From those days we can grow and learn.”

Presidential Medal of Freedom honoree Maya Angelou, who died Wednesday at the age of 86, said that it was her faith that made her so bold in standing for what was right.

“When I found that I knew not only that there was God but that I was a child of God, when I understood that, when I comprehended that, more than that, when I internalized that, ingested that, I became courageous,” Angelou told the New Orleans Times-Picayune in 2013.

“When I was asked to do something good, I often say yes, I’ll try, yes, I’ll do my best,” she continued, “And part of that is believing, if God loves me, if God made everything from leaves to seals and oak trees, then what is it I can’t do?”

Angelou often stated that before she began to write anything, she would spend time in prayer.  Part of her “writing ritual” was to have a Bible with her when she was writing.

A civil rights leader who spent much time working with Dr. Martin Luther King, Jr., Angelou said that her faith in God is what allowed her to see that all people were created equal under God because God created everyone.

“I will see human beings and I believe — whether they believe it or not — I believe they were made by God and I’m not in a position to put them down because they look different from me,” Angelou said.