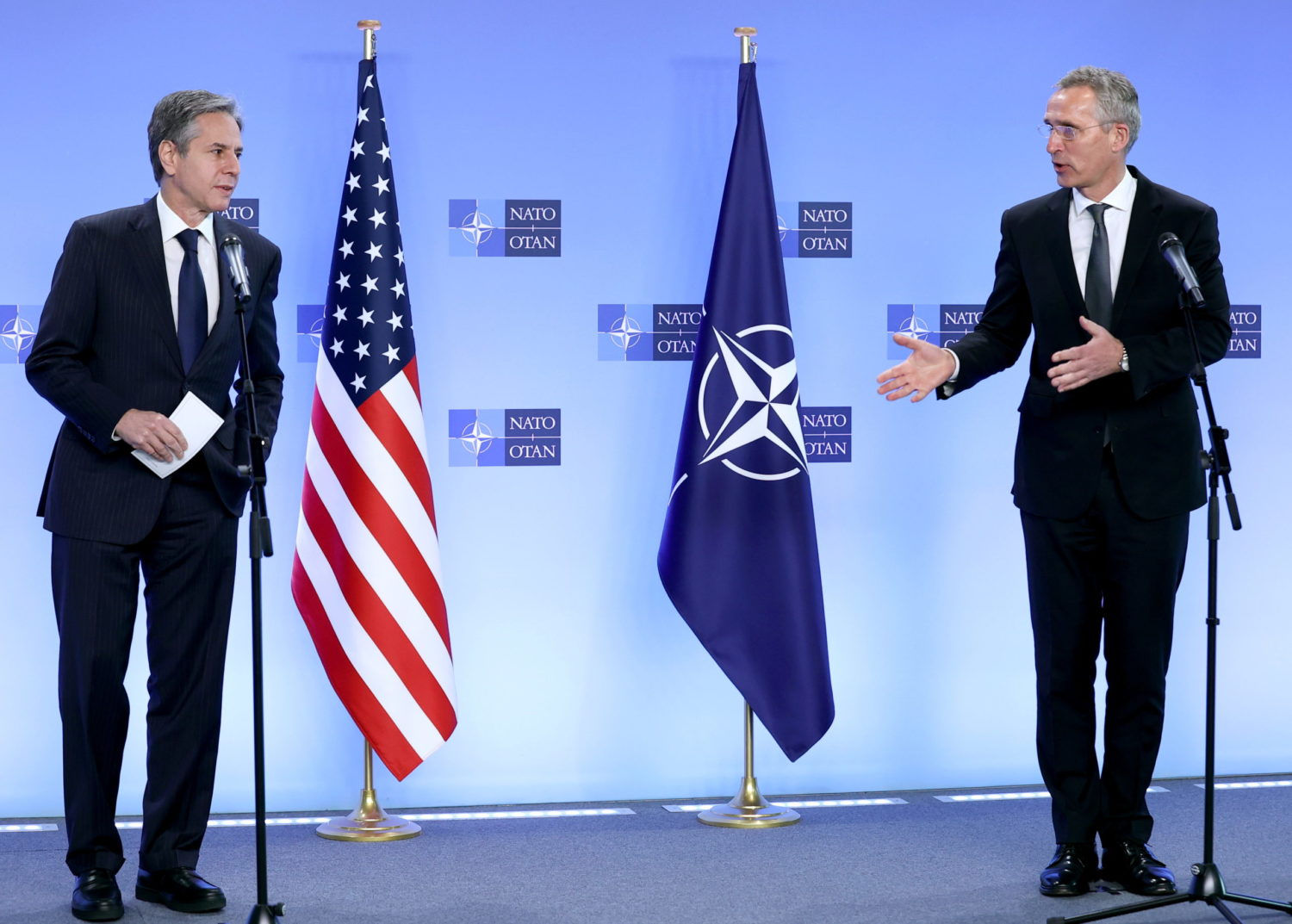 By Robin Emmott and Sabine Siebold

BRUSSELS/BERLIN (Reuters) – Foreign troops under NATO command will withdraw from Afghanistan in coordination with a U.S. pull-out by Sept. 11, NATO allies agreed on Wednesday, pledging to mirror American plans to start removing troops on May 1 after two decades of war.

Around 7,000 non-U.S. forces from mainly NATO countries, also from Australia, New Zealand and Georgia, outnumber the 2,500 U.S. troops in Afghanistan, but still rely on American air support, planning and leadership for their training mission.

“This is not an easy decision, and it entails risks. As I said for many months, we face a dilemma. Because the alternative to leaving in an orderly fashion is to be prepared for a long-term, open-ended military commitment with potentially more NATO troops,” Stoltenberg told a news conference.

Biden gave a speech on Wednesday in Washington announcing the U.S. withdrawal, saying that “it’s time to end the forever war.”

An integral part of NATO’s current mission, Resolute Support, is to train and equip Afghan security forces fighting the Islamist Taliban, which was ousted from power by a U.S. invasion in 2001 and has since waged an insurgency.

With non-U.S. troop numbers reaching as high as 40,000 in 2008, Europe, Canada and Australia have moved in tandem with the United States in a mission also providing long-term funding to rebuild Afghanistan despite the resurgence of Taliban-led violence and endemic official corruption in the country.

“This is not the end of our relationship with Afghanistan but rather the start of a new chapter. NATO allies will continue to stand with the Afghan people but it is now for the Afghan people to build a sustainable peace that puts an end to violence,” Stoltenberg said.

Germany and Bulgaria were two of the 36 countries involved in Resolute Support to immediate announce withdrawal plans. German Chancellor Angela Merkel and Biden discussed in a phone call the NATO military presence in Afghanistan and agreed to closely coordinate future steps, a German government spokesman said.

Sept. 11 is a highly symbolic date as it will be 20 years since al Qaeda attacked the United States with hijacked airliners, triggering military intervention in Afghanistan.

After withdrawing, the United States and NATO aim to rely on Afghan military and police forces, which they have developed with billions of dollars in funding, to maintain security, though peace talks are struggling and the insurgency is resilient.

A key reason for a coordinated withdrawal is the fact that NATO relies on U.S. airlift capabilities and shipping to move valuable equipment back home out of landlocked Afghanistan. NATO also wants to avoid any hardware falling into the hands of militants, as happened after the U.S. withdrawal from Iraq.

(Reporting by Robin Emmott; Editing by Mark Heinrich and Will Dunham) 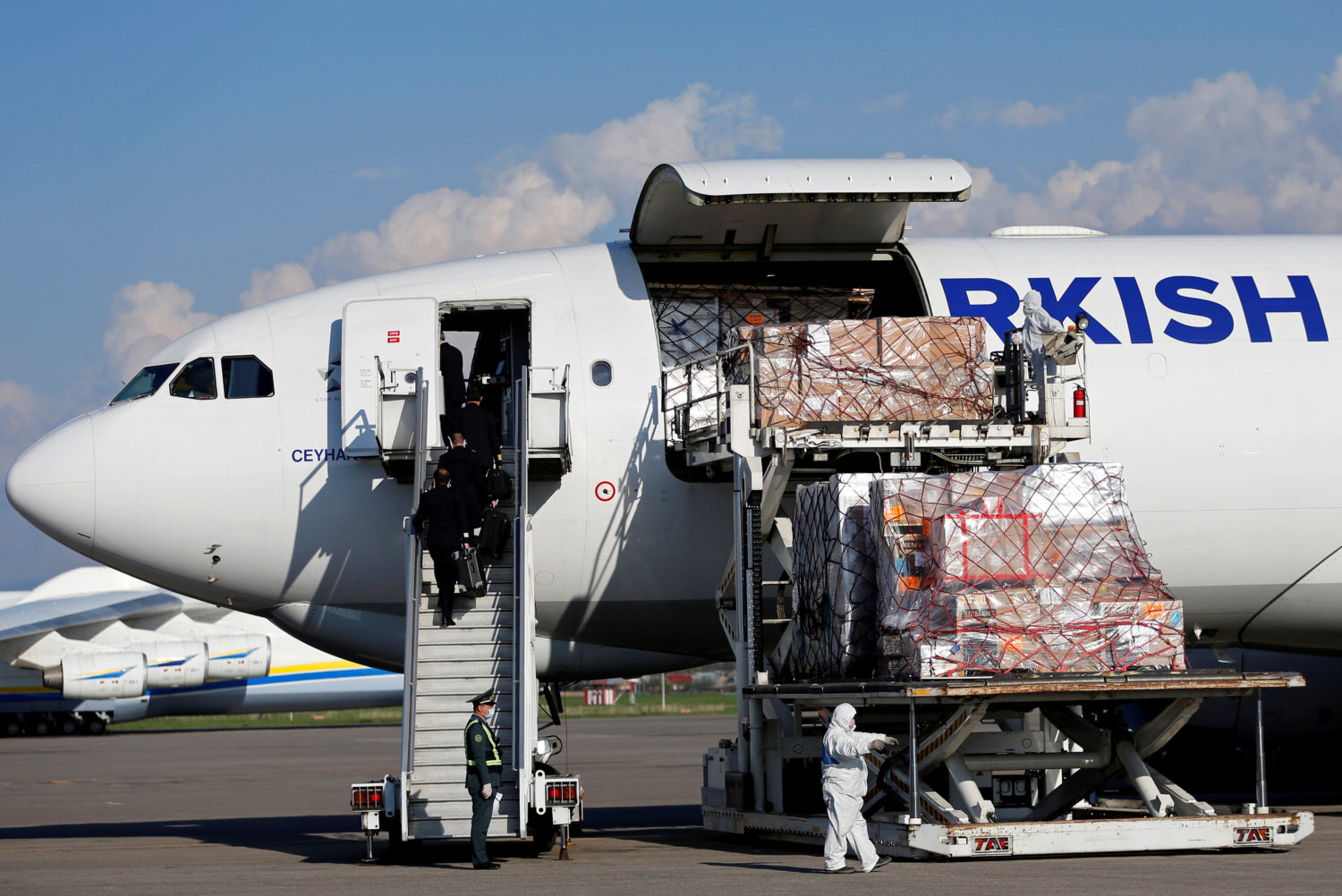 ANKARA (Reuters) – Emblazoned with Turkish flags and presidential seals, crates packed with medical equipment are loaded onto planes, part of a major aid campaign by Ankara which has dispatched supplies to dozens of countries since the new coronavirus pandemic erupted.

“There is hope after despair and many suns after darkness,” says a message on every shipment – a line from 13th-century Sufi poet Jalaluddin Rumi, which looks to better days not just in the battle against COVID-19 but also for Turkey’s fraught diplomacy.

With its relations with NATO allies in Europe and the United States darkened by disputes over Russian missile defenses, human rights, and Western sanctions on Iran, Turkey hopes the virus crisis is an opportunity to soothe recent tensions.

Despite battling one of the world’s biggest coronavirus outbreaks at home – where the death toll now exceeds 3,700 -, Turkey has sent medical aid to 61 countries, including the United States, Spain, Italy, France, and Britain.

By its own calculations, Ankara has been the world’s third-biggest aid distributor during the outbreak, sending face masks, protective suits, testing kits, disinfectant, and respirators.

In a letter to President Donald Trump sent with one shipment, President Tayyip Erdogan said he hoped the “spirit of solidarity” Turkey had shown would help U.S. politicians “better understand the strategic importance of our relations”.

Ankara faces potential U.S. sanctions over its purchase of Russian S-400 missile defenses, which it bought last year but has not yet fully deployed. Despite the threat of sanctions, it says the systems will ultimately be activated.

On Saturday, Erdogan also called on the European Union to increase its cooperation with Turkey in light of the support Ankara provided member states during the outbreak. “I hope the EU now understands that we are all in the same boat,” he said.

Turkey remains a candidate for EU membership but the process has long stalled amid disputes over Turkey’s human rights record, the handling of Syrian refugees, and gas exploration around Cyprus and the eastern Mediterranean.

Turkish aid shipments were also sent to Libya, Iraq, Iran, the Palestinian Authority, Russia, the Balkans and to China, where the new coronavirus first emerged.

Turkey says it has also sent aid to Israel, despite tensions over Israeli settlement building in the West Bank and the status of Jerusalem. Both sides expelled their top diplomats in 2018.

Turkey has sent aid to 15 countries in Africa, where it is seeking to expand influence and commercial ties.

Not all aid shipments have gone smoothly. A commercial shipment of ventilators to Spain was delayed over export licenses. Another commercial shipment of 400,000 protective suits to Britain was criticized after some failed quality checks, but both Ankara and London said that was not a government-to-government shipment, and that there had been no problem with aid sent directly by Turkey.

While the diplomatic outreach may have brought a change of tone to some of Ankara’s troubled international relations, analysts say lasting results are unlikely without concrete steps to address fundamental differences.

“No amount of goodwill, no amount of medical diplomacy will alter the negative repercussions that Turkey’s deployment of the S-400s has produced in Washington,” said Fadi Hakura, consulting fellow at the Royal Institute of International Affairs in London.

“If Turkey wants to curry favor with Washington, it has to terminate the S-400s.”

Gonul Tol, founding director of The Middle East Institute’s Center for Turkish Studies in Washington, said Turkey’s differences with the EU would also not be resolved overnight.

“While some countries have welcomed Turkish aid, Ankara’s problems with its neighbors and Western allies are too serious to be resolved by a few symbolic steps,” she said. 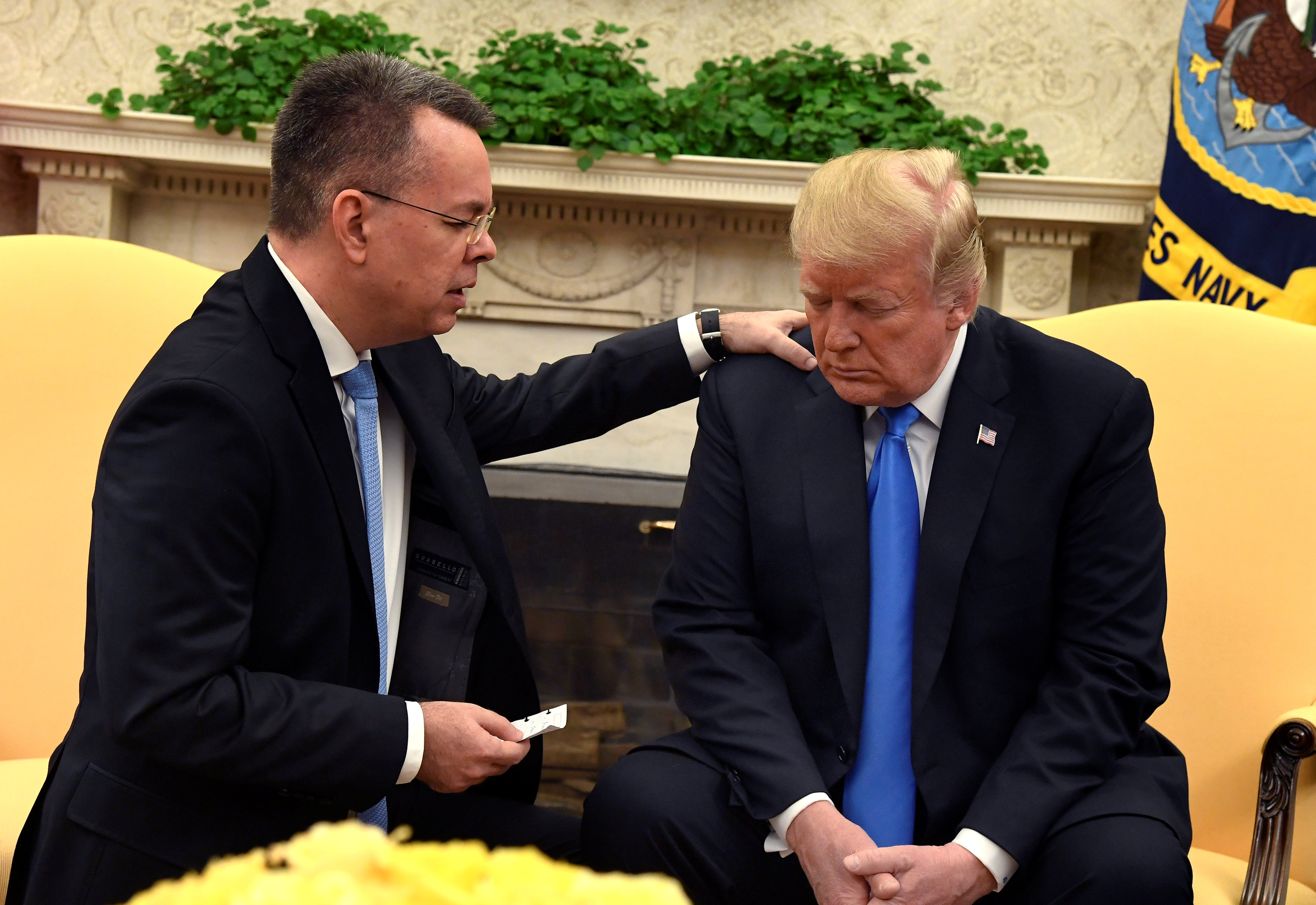 By Julia Harte and Timothy Gardner

WASHINGTON (Reuters) – President Donald Trump said on Saturday the release of U.S. pastor Andrew Brunson after two years in Turkish custody was a “tremendous step” toward improved relations with Turkey, but he denied cutting a deal with Ankara.

“The only deal, if you could call it a deal, is a psychological one. We feel much differently about Turkey today than we did yesterday, and I think we have a chance of really becoming much closer to Turkey,” Trump told reporters during an Oval Office meeting with Brunson.

A Turkish court on Friday sentenced Brunson, who had been charged with links to Kurdish militants and supporters of a U.S.-based Muslim cleric, to more than three years in prison but said he would not serve any further time because he had already been detained since October 2016.

The pastor’s release could signal a thaw in relations between the two NATO allies, which worsened in August after a deal to free Brunson fell apart and Trump authorized a doubling of duties on aluminum and steel imported from Turkey, helping drive the lira currency down against the dollar.

Trump did not pledge to lift the sanctions but said he welcomed an end to the “harsh relationship” the countries had over the past two months.

In front of U.S. Secretary of State Mike Pompeo, Trump’s national security adviser John Bolton, U.S. lawmakers and Brunson’s family, the pastor knelt beside Trump on the floor of the Oval Office, placed a hand on his shoulder, and prayed for God to give him “supernatural wisdom.”

Trump also thanked President Tayyip Erdogan at Saturday’s meeting for helping secure Brunson’s release, despite a curt Twitter post from the Turkish leader earlier on Saturday repeating that Brunson’s release was a court’s decision to make, not his.

“Dear Mr. President, as I always pointed out, the Turkish judiciary reached its decision independently,” Erdogan wrote on his Twitter account. “I hope that the United States and Turkey will continue their cooperation as the allies that they are, and fight together against terrorist groups.”

In response to a question, Trump said the administration is actively working on the status of other imprisoned Americans and government employees in Turkey. “We are working very hard,” he said.

Senator Thom Tillis, who was at the White House Saturday, previously criticized Turkey for continuing to detain “multiple other U.S. citizens, as well as several Turkish staff of the U.S. diplomatic mission, on scant evidence under the state of emergency.”

Brunson said that U.S. State Department personnel in Turkey are working on behalf of other American prisoners currently in custody. “They were involved very much in advocating for the other prisoners,” Brunson said. 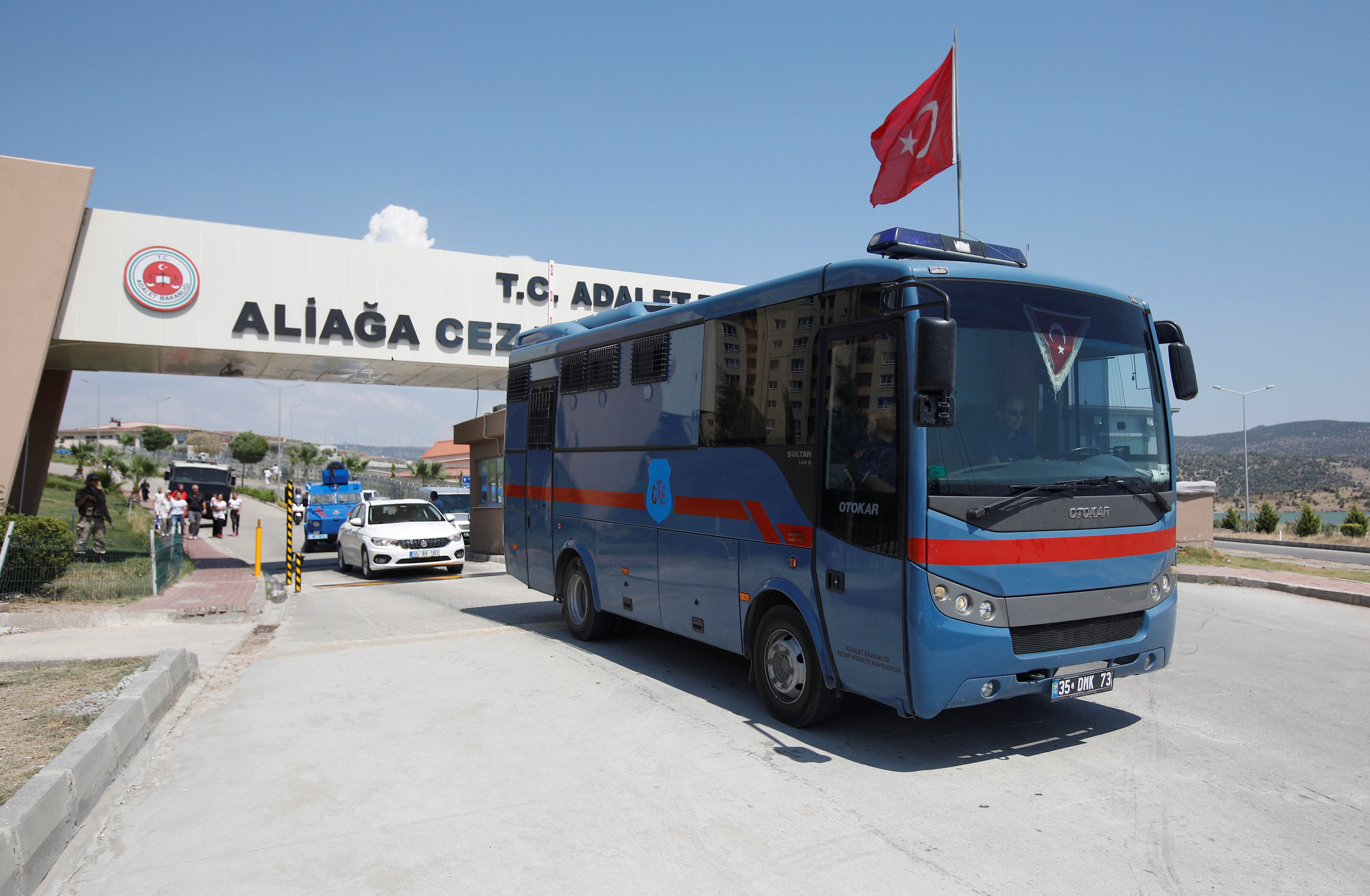