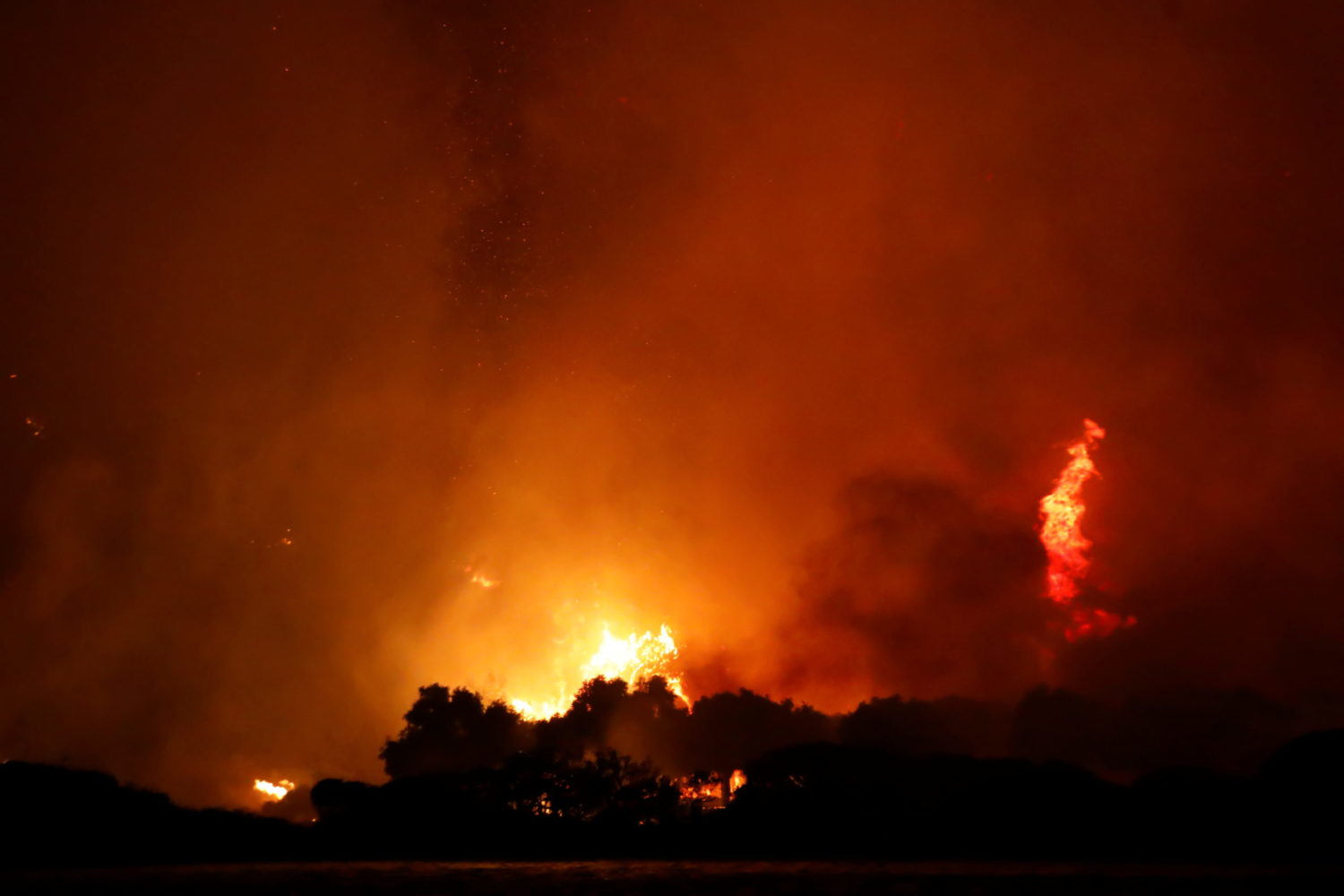 By Mert Ozkan and Tuvan Gumrukcu

MILAS, Turkey (Reuters) -A forest fire moved closer to a coal-fired power station in southwestern Turkey on Tuesday evening and wildfires raged near southern resorts for a seventh day as firefighting planes from Spain and Croatia joined the battle to quell them.

Eleven fires were still blazing, fanned by strong winds, temperatures above 40 degrees Celsius (104°F), and low humidity, officials said. Plumes of black smoke rose from hillsides and forests near the coastal resorts of Bodrum and Marmaris.

“The situation is very serious. The flames have come to the edge of the thermal power plant,” Muhammet Tokat, mayor of Milas to the east of the major resort Bodrum, said on Twitter.

He shared a video taken from a vessel at sea showing a fire blazing on a hillside under a night sky, a few hundred meters from the illuminated Kemerkoy power station and called for a plane or helicopter with night vision to be sent to the area.

Two firefighting planes from Spain and one from Croatia joined teams from Russia, Iran, Ukraine and Azerbaijan to battle blazes on Tuesday, after Turkey requested European support.

The mayors of the southern resort cities of Bodrum and Antalya have pleaded for more planes this week as the fires raged near Mediterranean and Aegean coasts.

A village near Milas was evacuated with flames engulfing houses and buildings, Reuters TV footage showed.

Opposition parties criticized President Tayyip Erdogan and his government for depleting firefighting resources over the years. Thousands also took to social media calling for Erdogan to step down, while others criticized the lack of resources and what they called inadequate preparations.

“To say it frankly, Turkey is not being managed,” said Kemal Kilicdaroglu, leader of the main opposition Republican People’s Party (CHP). “The government of the (presidential) palace has rendered our state incapable.”

Responding to criticism that the government had rejected some offers of international help, Foreign Minister Mevlut Cavusoglu said Turkey had assessed many proposals, prioritizing offers of planes and helicopters.

He said some countries, including France and Greece, rescinded their offers because of their own needs and fires. Israel’s foreign ministry said it discussed the situation with Turkish officials but was told Turkey did not need assistance.

Turkey’s radio and television watchdog RTUK told broadcasters on Tuesday that negative coverage of the fires could encourage “an atmosphere of chaos”, harming the public’s and firefighters’ morale. It warned the media of the “harshest punishments” if they did not adhere to RTUK’s principles.

The heatwave that has fueled the fires came after months of exceptionally dry weather in Turkey’s southwest, according to maps issued by meteorological authorities.

Data from the European Forest Fire Information Service showed there have been three times as many fires as usual this year, while the more than 136,000 hectares burnt in Turkey were three times the area burnt on average in an entire year.

Eight people have been killed in a total of 156 wildfires which have erupted in the last week. There were no reports of further casualties on Tuesday.

The government is investigating the cause of the fires, including possible arson. Authorities caught one person who tried to light a fire outside a military compound in the southwestern province of Denizli, the Defense Ministry said.

Since Wednesday, thousands of people have been evacuated from their homes and some tourists fled their hotels by boat or by road, although Tourism Minister Mehmet Ersoy said holidaymakers had returned within hours.