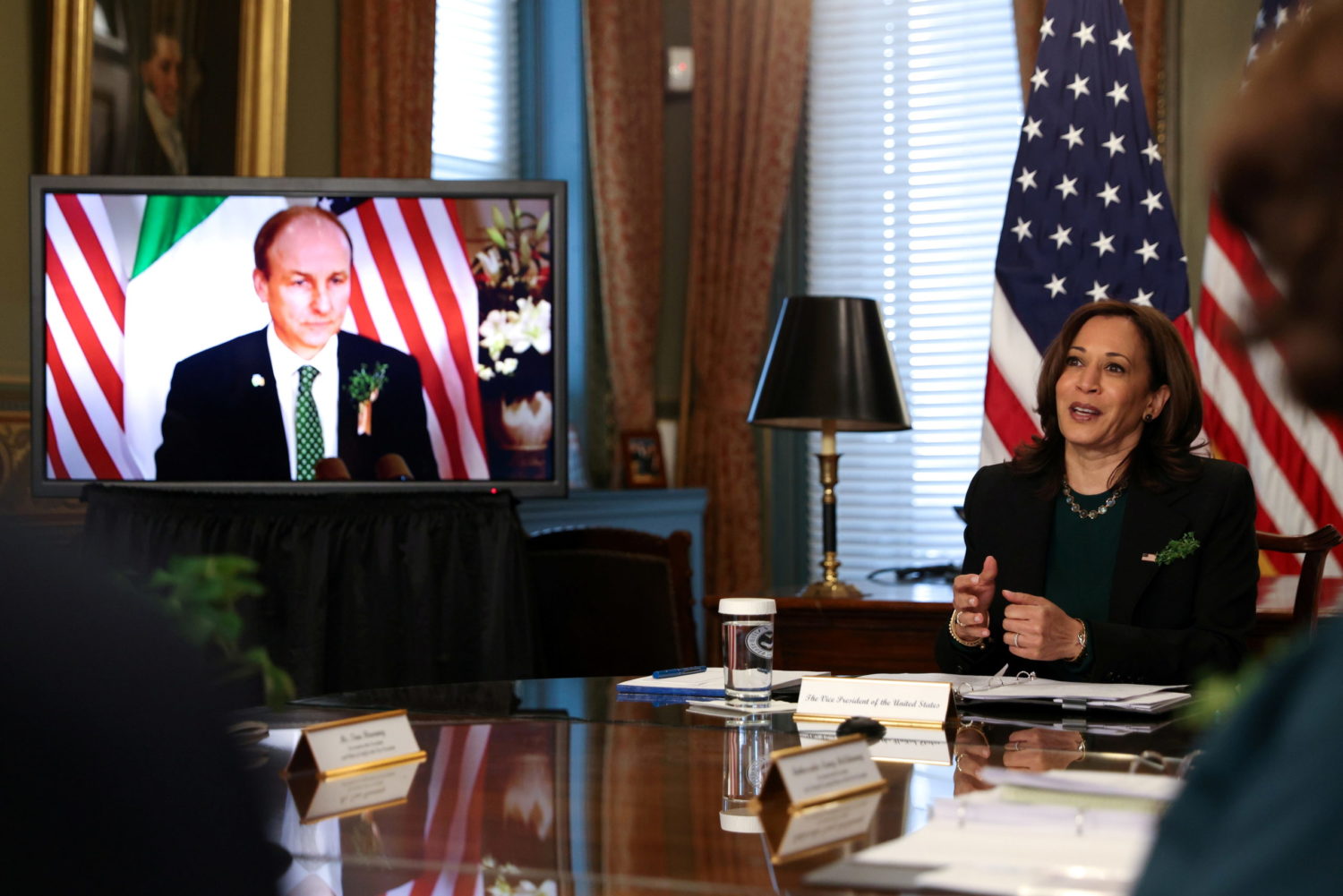 By Andrea Shalal and Trevor Hunnicutt

WASHINGTON (Reuters) – U.S. President Joe Biden on Wednesday underscored his strong commitment to the landmark 1998 Good Friday peace agreement and the need to maintain the political and economic stability of Northern Ireland.

“We strongly support that, and think it’s critically important to be maintained,” Biden said at the start of a virtual meeting with Irish Prime Minister Micheál Martin on St. Patrick’s Day. “The political and economic stability of Northern Ireland is very much in the interest of all our people.”

Biden and Martin pledged to expand ties between the two close allies, including on issues such as climate change, combating the coronavirus pandemic, and cancer research.

Martin said he looked forward to visiting Washington and hoped Biden would be able to visit Ireland once it was safe.

The Irish leader thanked Biden for his “unwavering support” of the Good Friday Agreement, adding, “It has meant a lot. And it has mattered.”

“With a new trading relationship now in place between the European Union and the United Kingdom, and a protocol that protects peace and avoids a hard border on this island, I want to move forward with a positive relationship with the United Kingdom,” Martin said. “That means standing by what has been agreed and working together to make a success of it.”

A senior U.S. official told reporters before the meeting that the Biden administration viewed a British-EU rift over the movement of goods to Northern Ireland as a trade issue, and would not take sides on the matter.

“In the midst of global freedoms being in decline, our nations remain close because we are committed to democracy,” Harris said in her ceremonial office, which was adorned with a large shamrock-type plant in honor of St. Patrick’s Day.

Biden, an Irish-American, said the White House would be illuminated in green later Wednesday to “celebrate the deep, deep affection” Americans had for Ireland. Fountains at the White House also ran green, continuing a tradition that dates back to the administration of former President Barack Obama.

“The key objective is of course to deepen our relationship,” Martin told MSNBC earlier. “In President Biden, we have the most Irish-American president since John F. Kennedy, and his election was greeted with great affection and warmth in Ireland.”

The meeting came amid simmering disputes related to the implementation of agreements put into place as the UK exited the EU, including the Northern Ireland protocol, which governs the movement of goods into the British-ruled province.

The dispute has raised tensions in the region, more than two decades after the 1998 accord that largely ended three decades of violence between mostly Protestant unionists, who want Northern Ireland to stay in the UK, and mostly Roman Catholic nationalists seeking to unite the Irish Republic and Northern Ireland.

The senior U.S. official said Washington welcomed provisions in both the EU-UK Trade and cooperation agreements, as well as the Northern Ireland protocol, which it believed would protect the gains of the peace agreement.

The United States would not “take sides” in the dispute over implementation of the protocol, the official said. “We view that as a trade issue to be resolved between the UK and the EU, and hope that both sides are able to return to the table and discuss the implementation of the agreement.”

Martin has said Ireland, an EU member, is counting on U.S. support to help maintain the political stability of Northern Ireland.

Earlier this month, Northern Irish loyalist paramilitary groups said they were temporarily withdrawing support for the 1998 peace agreement due to concerns over the Brexit deal.

The groups expressed concern about a disruption to trade between Britain and Northern Ireland and said they believed that Britain, Ireland and the EU had breached their commitments to the peace deal.

No decision has been made on the U.S. appointment of a special envoy to deal with Northern Ireland, the U.S. official said.

The virtual meeting with Martin is the first bilateral event with Ireland hosted by Biden, who attended a St. Patrick’s Day Mass at his church in Delaware before returning to Washington. Biden is expected to make a trip to Ireland as soon as this summer.

(Reporting by Andrea Shalal and Trevor Hunnicutt; Additional reporting by Steve Holland in Washington and Conor Humphries in Dublin; Editing by Peter Cooney and Rosalba O’Brien) 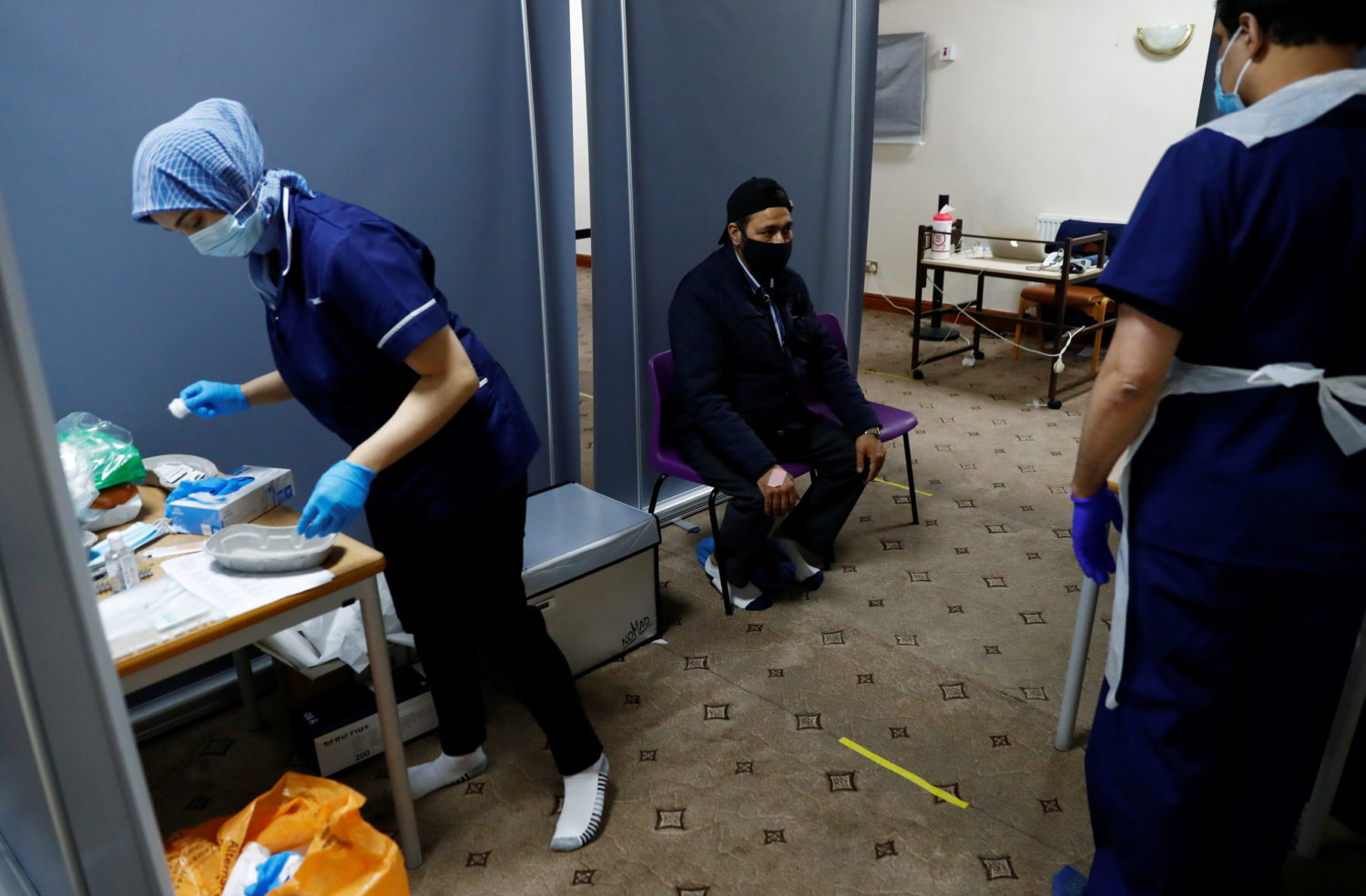 LONDON (Reuters) – The chief medical officers of the United Kingdom lowered their COVID-19 alert level on Thursday, citing a gradual reduction in pressure on the health service.

“Following advice from the Joint Biosecurity Center and in the light of the most recent data, the four UK Chief Medical Officers and NHS England National Medical Director agree that the UK alert level should move from level 5 to level 4 in all four nations,” Britain’s health ministry said in a statement.

“The health services across the four nations remain under significant pressure with a high number of patients in hospital, however thanks to the efforts of public we are now seeing numbers consistently declining,” the medical officers added. 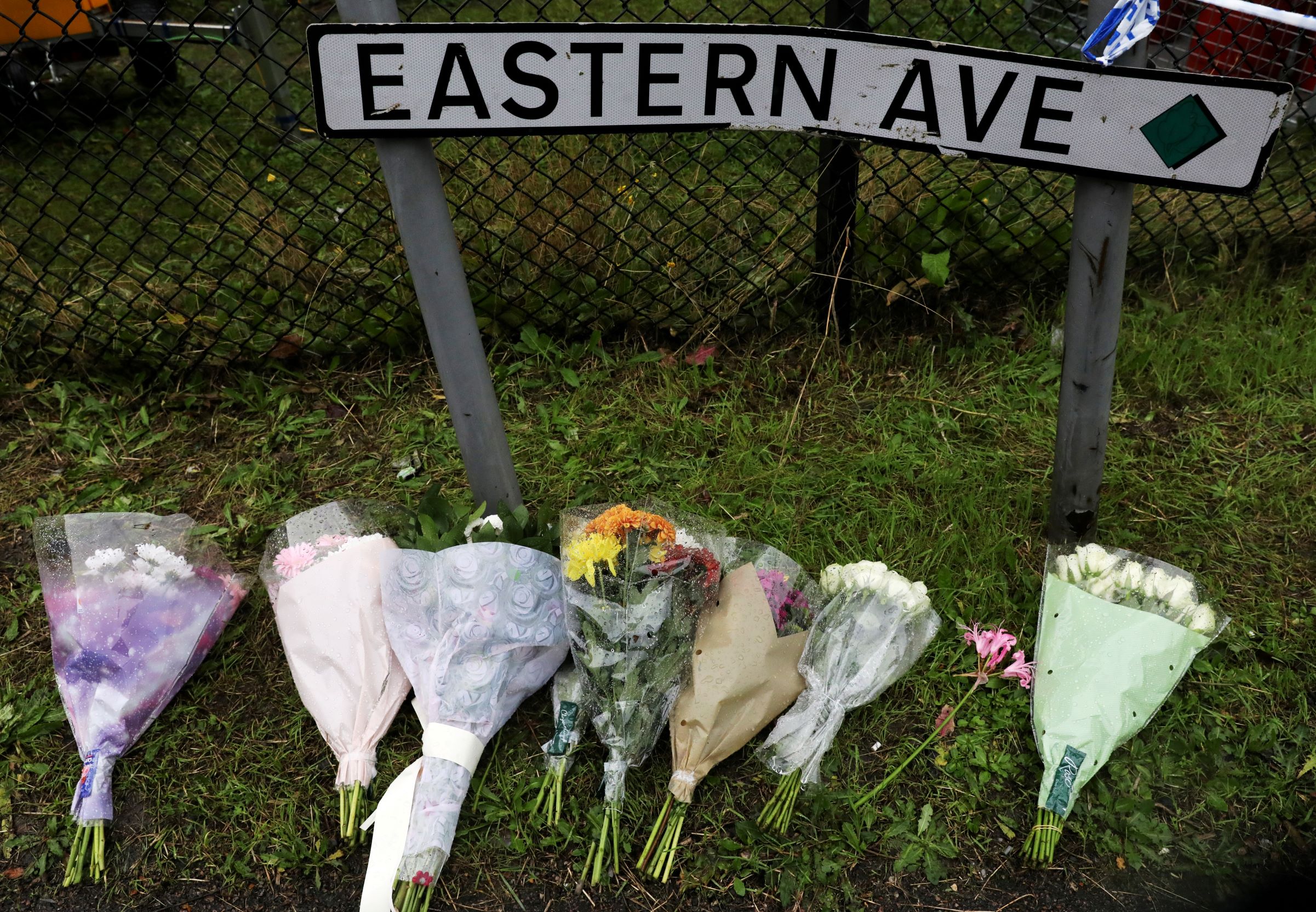 GRAYS, England (Reuters) – Police were given extra time on Thursday to question a driver arrested on suspicion of murder after 39 people, believed to be Chinese nationals, were found dead in a refrigerated truck near London, in an investigation focused on human trafficking.

Officers searched three properties in the County Armagh area of Northern Ireland. The driver has not been formally identified but a source familiar with the investigation said he was Mo Robinson from the Portadown area of the British province.

Paramedics and police found the bodies of 31 men and eight women on Wednesday in a truck container on an industrial estate at Grays in Essex, about 20 miles (32 km) east of London.

For years, illegal immigrants have attempted to reach Britain stowed away in trucks, often from the European mainland. In the biggest tragedy, 58 Chinese were found dead in a tomato truck in 2000 at the port of Dover.

“We read with heavy heart the reports about the death of 39 people in Essex,” the Chinese Embassy said in a statement, adding further clarification was being sought with police.

Essex police said their priority was ensuring dignity for the victims during their inquiry.

“Each of the 39 people must undergo a full coroner’s process to establish a cause of death before we move on to attempting to identify each individual within the trailer,” police said in a statement, saying that would be a time-consuming operation.

Police were given permission from local magistrates to detain the 25-year-old driver for an additional 24 hours on Thursday.

The trailer part of the truck arrived at Purfleet docks in Essex, southern England, from the Belgian port of Zeebrugge – as did the vehicle involved in 2000.

Its red cab unit, which had “Ireland” emblazoned on the windscreen along with the message “The Ultimate Dream”, entered Britain via Holyhead in north Wales, having started its journey in Dublin, police said.

Irish company Global Trailer Rentals said it owned the trailer and had rented it out on Oct. 15 from its depot in County Monaghan at a rate of 275 euros ($305) a week, Irish broadcaster RTE said. The firm said it was unaware of what it was to be used for, RTE added.

The discovery of the bodies was made at 1.40 a.m. just over an hour after the container arrived in Purfleet, not far from the industrial estate in Grays.

The vehicle has been moved to a secure site at nearby Tilbury Docks where forensic work can take place. Officials have set up a book of condolence at civic offices in Grays.

The National Crime Agency, which targets serious and organized crime, said it was helping the investigation and working urgently to identify any gangs involved.

Shaun Sawyer, national spokesman for British police on human trafficking, said thousands of people were seeking to come to the United Kingdom illegally. While they were able to rescue many of those smuggled in, Britain was perceived by organized crime as a potentially easy target for traffickers.

“You can’t turn the United Kingdom into a fortress. We have to accept that we have permeable borders,” he told BBC radio.

The head of the Road Haulage Association said traffickers were “upping their game” and closer cooperation with European nations was needed, albeit that may be complicated by Britain’s potential exit from the European Union.

“There is simply not enough being done in terms of security, in terms of the protection of vehicles across Europe,” Richard Burnett told BBC TV.

BELFAST (Reuters) – Campaigners who fought for decades to end Northern Ireland’s same sex-marriage ban and restrictions on abortion prepared on Monday for a momentous change to the laws on both at the stroke of midnight.

Northern Ireland is the only part of the United Kingdom that does not allow same-sex marriage. Also, unlike England, Scotland and Wales, laws in Northern Ireland forbid abortion except where a mother’s life is at risk, bans that have been upheld by the region’s block of conservative politicians.

But an overwhelming vote by British lawmakers in July to compel the government in London to overhaul the laws if Belfast’s devolved executive had not been restored by Oct. 21 is set to kick in with little or no hope of politicians ending the local parliament’s near three-year hiatus.

Advocacy groups have planned a number of events on Monday to usher in the changes.

“We are not going to stick with the guilt and the shame any longer. Tomorrow the law changes in this place, and for the first time in Northern Ireland, women will be free,” Pro-choice campaigner Dawn Purvis told a public meeting in Belfast

“Free to choose if, when and how many children they will have in the care of health-care professionals. This is a very emotional day for many here.”

Abortion rights were long opposed in Northern Ireland by religious conservatives in both the Protestant community that supports continued British rule and the Catholic community that favours union with the traditionally Catholic Irish Republic.

Pressure has mounted, however, to change the Victorian-era laws in recent years, particularly after the neighbouring Irish Republic voted overwhelmingly last year to repeal a similarly restrictive ban, demonstrating a stark change in attitudes on an island once known for its religious conservatism.

If a new devolved government is not formed by midnight, abortion will be decriminalised, beginning a consultation on what the framework for services should look like, which is due to be finalised and approved by March 2020.

“This is a bad law being implemented through a bad process leading to bad consequences for both women and unborn children,” said Dawn McAvoy from the anti-abortion Both Lives Matter group.

Opinion has also changed on same-sex marriage. But despite opinion polls showing most in the region in favour, previous attempts to follow the Irish Republic in legalising it have been blocked by the socially conservative Democratic Unionist Party (DUP), using a special veto intended to prevent discrimination towards one community over another.

It will take the British parliament until mid-January to bring in the new legislation, setting up Feb. 14, 2020 – Valentine’s Day – as the first opportunity for same-sex couples to marry once they give the required 28-days’ notice.