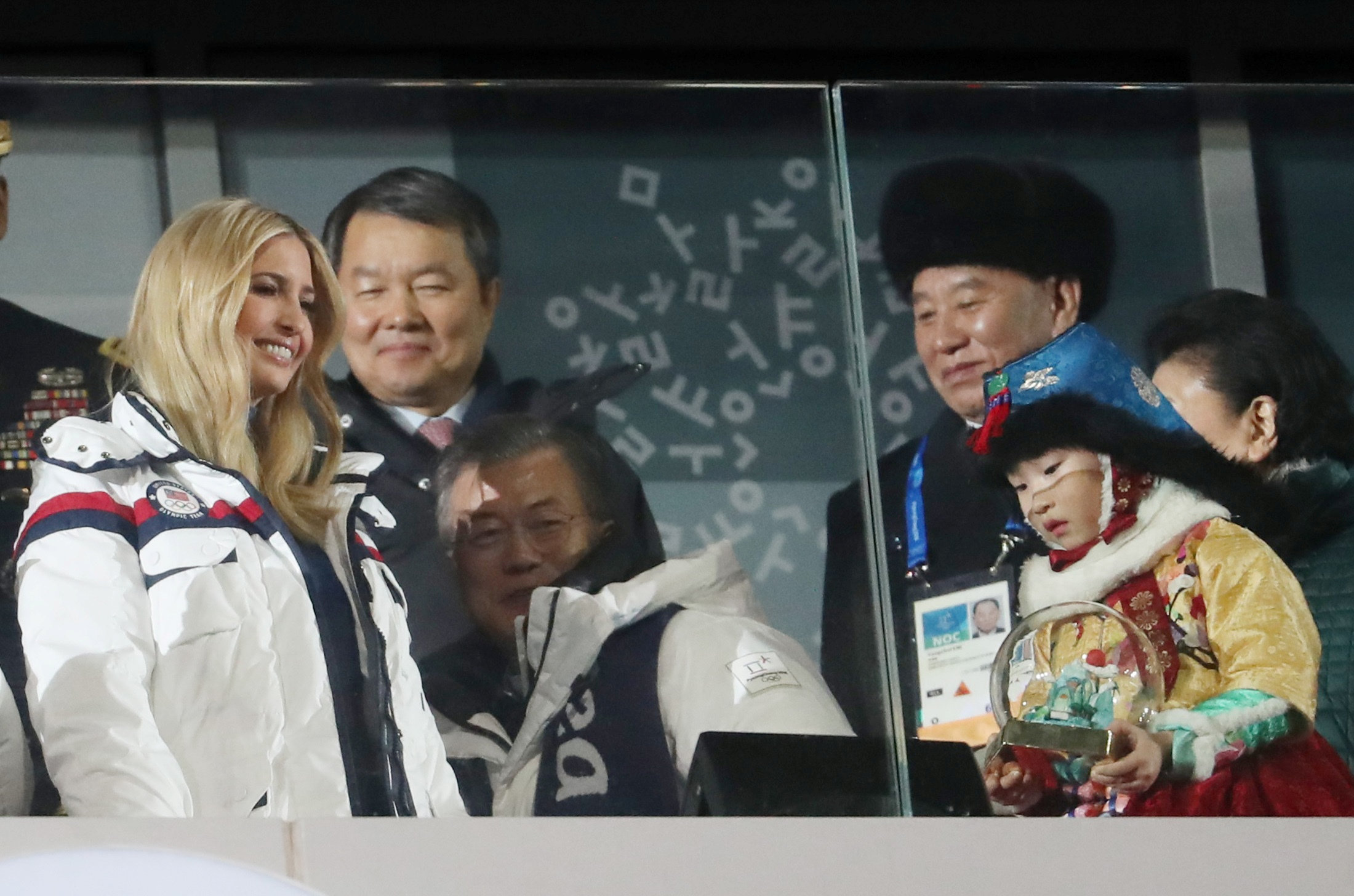 By Yuna Park and Roberta Rampton

SEOUL/WASHINGTON (Reuters) – The White House said any talks with North Korea must lead to an end to its nuclear program after senior officials from Pyongyang visiting South Korea said on Sunday their government was open to talks with the United States.

The North Korean delegation, in Pyeongchang for the closing ceremony of the Winter Olympics, met at an undisclosed location with South Korean President Moon Jae-in, and expressed a willingness to meet with the United States, Moon’s office said in a statement.

The Pyongyang delegation said developments in relations between the two Koreas and between North Korea and the United States should go hand in hand, according to the statement.

The Olympics gave a boost to recent engagement between the two Koreas after more than a year of sharply rising tensions over the North’s missile program and its sixth and largest nuclear test in defiance of U.N. sanctions.

The United States announced on Friday it was imposing its largest package of sanctions aimed at getting North Korea to give up its nuclear and missile programs.

On Sunday, North Korean state media accused the United States of provoking confrontation on the Korean peninsula with the sanctions.

The White House said its sanctions would continue.

“We will see if Pyongyang’s message today, that it is willing to hold talks, represents the first steps along the path to denuclearization,” the White House said in a statement.

“In the meantime, the United States and the world must continue to make clear that North Korea’s nuclear and missile programs are a dead end,” it said.

NO INTERACTION WITH IVANKA TRUMP

Ivanka Trump, a senior White House adviser, did not interact with the North Korean delegation, a senior U.S. administration official said. She met Moon on Friday as part of a weekend trip leading the U.S. delegation to the closing ceremony.

North Korea sent former military intelligence chief Kim Yong Chol, an official accused of being behind a deadly 2010 attack on a South Korean warship, to lead its delegation.

The decision enraged the families of 46 sailors killed in the torpedo attack and threatened the mood of rapprochement that Seoul sought to create at what it called the “Peace Games.”

North Korea has denied its involvement in the sinking.

Moon met Kim in Pyeongchang, where the Olympics were held, before the closing ceremony, the South Korean government said.

Earlier, about 100 conservative South Korean lawmakers and activists staged a sit-in near the border with North Korea, to protest Kim’s arrival and facing off against about 2,500 South Korean police.

The North’s delegation took a different route, prompting the opposition Korea Liberty Party to accuse Moon’s administration of “abuse of power and an act of treason” by rerouting the motorcade to shield it from the protest.

The North sent Kim Yo Jong, the younger sister of North Korean leader Kim Jong Un, to the opening ceremony.

She was the center of a frenzy of attention, especially when she appeared at the opening ceremony and was only a few feet from U.S. Vice President Mike Pence. They did not speak.

Kim Yo Jong and the North’s nominal head of state were the most senior North Korean officials to visit the South in more than a decade. The North Korean leader later said he wanted to create a “warm climate of reconciliation and dialogue.”

The U.S. president, in announcing the new sanctions on Friday, warned of a “phase two” that could be “very, very unfortunate for the world” if the sanctions did not work.

North Korea denounced the sanctions in a statement carried on its state media and said a blockade by the United States would be considered an act of war.

(Reporting by Yuna Park and Christine Kim in Seoul; additional reporting by Yasmeen Abutaleb and Roberta Rampton in Washington; Writing by Josh Smith; Editing by Daniel Wallis and Jeffrey Benkoe) 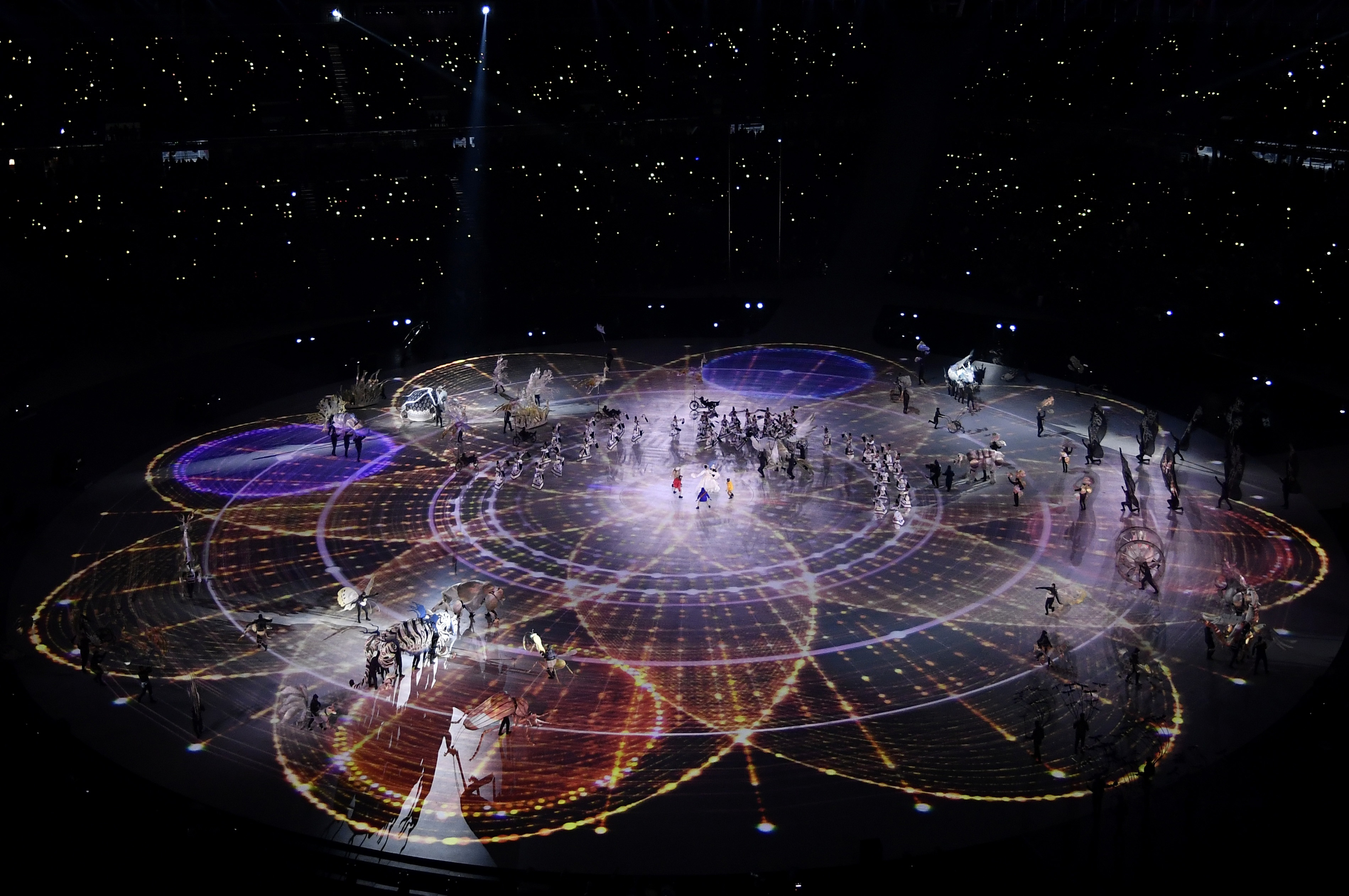 By James Pearson and Hyunjoo Jin

PYEONGCHANG, South Korea (Reuters) – The Winter Olympics sparked to life in a vivid, colorful ceremony of fire and ice in South Korea on Friday, though the diplomacy was tougher to choreograph in the stadium where leaders from nations that are sworn enemies sat close together.

South Korea, which is using the Pyeongchang Games to break the ice with North Korea, seated its presidential couple alongside U.S. Vice President Mike Pence and his wife, with two of the North’s most senior officials sitting in the row behind.

President Moon Jae-in, who wants to harness the Olympic spirit to pave the way for talks over the North’s nuclear and missile program, warmly shook hands with North Korean leader Kim Jong Un’s smiling sister as well as the North’s nominal head of state.

The South is still technically at war with the North after the 1950-53 Korean War ended in a truce, and the United States and North Korea have recently swapped nuclear threats. Pence vowed only this week to tighten sanctions on the North.

Underlining Moon’s efforts to re-engage with the North, the opening ceremony followed the story line of children wandering through a mythical landscape and discovering a world where people live in peace and harmony.

The Olympics have provided some respite from years of tense relations between Seoul and Pyongyang, though just hours before the ceremony hundreds of anti-North Korean protesters scuffled with riot police outside the stadium, burning North Korean flags and pictures of its leader, Kim Jong Un.

South Korea’s frigid February, where temperatures have plummeted to minus 20 degrees Celsius (-4 Fahrenheit) at night, has come as a shock to the system for athletes and visitors alike in the leadup to these Games, prompting concerns about hypothermia at the opening ceremony. 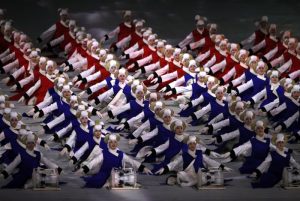 The weather was a little milder than forecast on Friday, but spectators still huddled near heaters, holding hot packs and slurping down steaming fishcake soup to ward off the chills.

Bundled up in a scarf, mask and knitted hat, with hot packs tucked into her knee blanket, office worker Shin Hye-sook said she and her three colleagues were coping with the cold.

“It’s okay unless the wind blows,” said the 60-year-old. “We’re sitting as close as we can and trying not to move a lot to save our energy.”

Pyeongchang has waited a long time for this moment.

The alpine town first bid for the 2010 Games but narrowly lost out to Vancouver, and suffered similar heartbreak when it was beaten to the 2014 Olympics by Sochi.

After announcing its arrival on the international stage by hosting the 1988 Seoul Olympics, South Korea now wants to show the world just how far it has come over the last 30 years with a Games showcasing its culture and technological prowess.

According to Olympic tradition, the Greek contingent headed the parade of athletes into the open-air stadium, followed by the other delegations in order according to the Korean alphabet.

Pence stood to welcome the U.S. athletes as the Korean pop hit Gangnam Style blared around the stadium, sparking the ‘Horse Dance’ in the crowd and among the volunteers.

The moment failed to elicit even a smile from the two senior North Korean officials in the VIPs box, however, as they sat stony-faced in black fluffy hats and long coats.

Elsewhere in the stadium, a Kim Jong Un impersonator was not made as welcome as the North Koreans in the VIP box and was ejected by security. “Well is my sister getting the same treatment?” he demanded to know.

As the athletes made their way around the track, one of the biggest cheers was reserved for muscle-bound Tongan Pita Taufatofua, who repeated his famed Rio Games entrance by marching in shirtless, oiled up and wearing a traditional skirt — this time in sub-zero temperatures.

Samaneh Beyrami Baher blinked back tears at the head of Iran’s four-strong athletic delegation, and minutes later the crowd erupted as athletes from North and South Korea marched together under the unification flag for the first time at an Olympics since 2006.

A contingent of North Korean cheerleaders greeted the athletes by waving a controversial version of the flag depicting disputed islands known as Dokdo in Korean and Takeshima in Japanese.