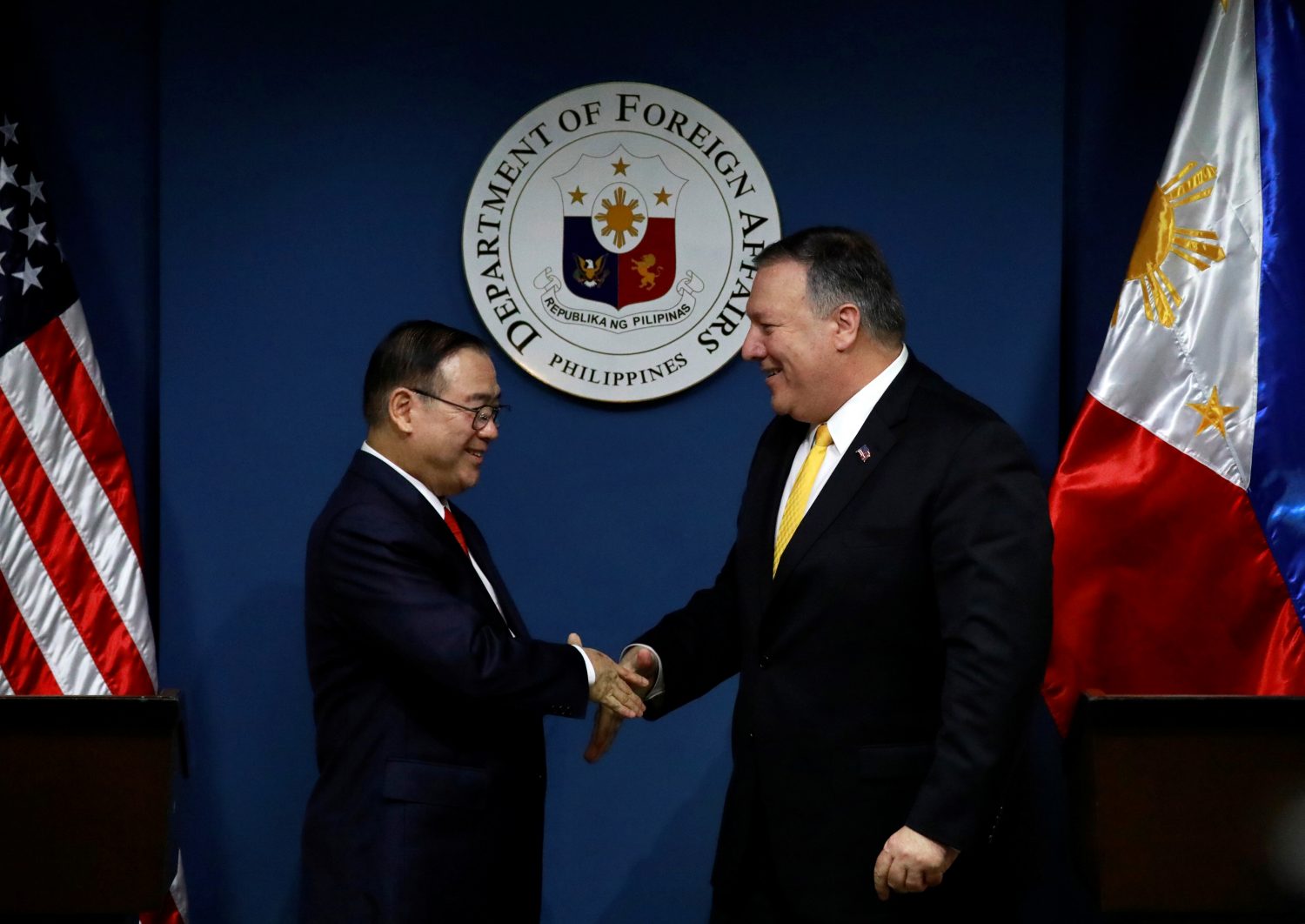 MANILA (Reuters) – U.S. Secretary of State Mike Pompeo assured the Philippines on Friday it would come to its defense if it came under attack in the South China Sea, reaffirming a defense code that Manila’s security chiefs have sought to revise.

Speaking during a stopover after a summit in Hanoi with North Korea, Pompeo said a 1951 Philippine-U.S. Mutual Defence Treaty would be adhered to if its ally was a victim of aggression, and singled out China as a threat to stability.

“China’s island-building and military activities in the South China Sea threaten your sovereignty, security and therefore economic livelihood as well as that of the United States,” he told a news conference in Manila.

“Any armed attack on Philippine forces, aircraft or public vessels in the South China Sea will trigger mutual defense obligations.”

The Philippines, China, Vietnam, Taiwan, Brunei and Malaysia have competing claims of sovereignty in the waterway, a conduit for in excess of $3.4 trillion of goods carried annually on commercial vessels.

Pompeo said those countries were responsible for ensuring “these incredibly vital sea lanes are open and China does not pose a threat to closing them down”.

Speaking in Beijing, Chinese Foreign Ministry spokesman Lu Kang said that China and the countries around the South China Sea were working hard to protect peace and stability.

“So if countries outside the region, like the United States, really want to consider the peace, tranquillity and well-being of people in the region, then they shouldn’t make trouble out of nothing and incite trouble,” Lu told reporters.

Pompeo also said allies should be wary of risks of using Chinese technology.

Lorenzana’s push for greater certainty comes amid a rapid buildup by Beijing of military assets, coastguard and fishing militia in the South China Sea, most notably on and around artificial islands in the Spratly archipelago.

Although there is no longer a permanent U.S. military presence in the Philippines, joint exercises, intelligence exchanges and transfers of hardware take place regularly under various agreements.

Philippine President Rodrigo Duterte, however, is not a fan and believes that the alliance makes his country a potential target of China, with which he wants stronger business ties.

Duterte has repeatedly questioned the U.S. commitment, noting that it did nothing to stop China from turning reefs into islands equipped with radar, missiles batteries and hangers for fighter jets, and within firing distance of the Philippines.

Pompeo made a courtesy call on Duterte late on Thursday.

Philippine Foreign Secretary Teodoro Locsin confirmed that discussions on the defense treaty were taking place, but in his own view, it was better not be too specific about its parameters.

“I believe in the old theory of deterrence,” he told reporters. “In vagueness lies the best deterrence.”