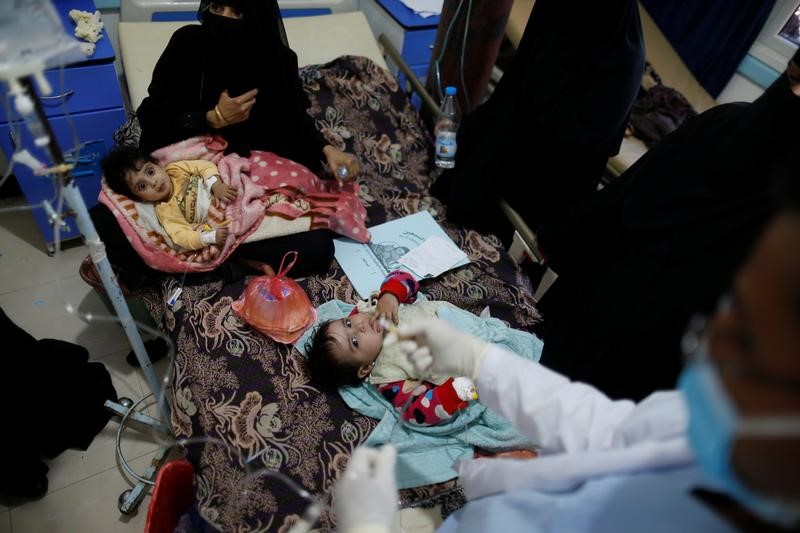 HODEIDAH, Yemen (Reuters) – One of the latest victims of the cholera epidemic that has killed more than 2,000 people in Yemen had yet to even take her first breath.

Her mother Safaa Issa Kaheel, then nine months pregnant, was brought into a crowded clinic in the Western port city of Hodeidah by her husband, who had to borrow the travel fare from a neighbor. “My stomach started hurting more and more,” said Kaheel, 37, a hydrating drip hooked into her arm.

Once there, she was referred by nurse Hayam al-Shamaa for an ultrasound scan which showed her baby had died of dehydration – one of 15 to perish in the womb due to cholera in September and October, according to doctors at the city’s Thawra hospital.

“I felt like death,” Kaheel said, her voice strained. “Thank god I survived the (delivery), but my diarrhea hasn’t stopped.”

The Red Cross has warned that cholera, a diarrheal disease that has been eradicated in most developed countries, could infect a million people in Yemen by the end of the year.

Two and a half years of war have sapped Yemen of the money and medical facilities it needs to battle the contagion, to which aid agencies and medics say the poor, the starving, the pregnant and the young are most vulnerable.

The cholera ward is full of children – some writhing in agony, others eerily still. The blanket over one boy too weak to move rises and falls with his shallow breathing.

Save the Children said in August that children under 15 represent nearly half of new cases and a third of deaths, with malnourished children more than six times more likely to die of cholera than well-fed ones.

Millions of Yemenis are struggling to find food and the baking desert plains around Hodeidah are hotspots both of hunger and sickness.

Yemen’s war pits the armed Houthi movement against the internationally recognized government of President Abd-Rabbu Mansour Hadi, which is backed by a Saudi-led coalition that has launched thousands of air strikes to restore him to power.

At least 10,000 people have been killed in the conflict.

The country’s health sector has been badly battered while a struggle over the central bank has left public sector salaries for doctors and sanitation workers unpaid.

Soumaya Beltifa, spokesperson for the Red Cross in Sanaa, warned that a lack of funds and health personnel were blunting efforts to eradicate the disease, making it unlikely Yemen would be healthy again soon.

“The cholera epidemic has become a norm, leading to complacency in dealing with the disease, not only by civilians but also from the various (aid) organizations,” she warned. 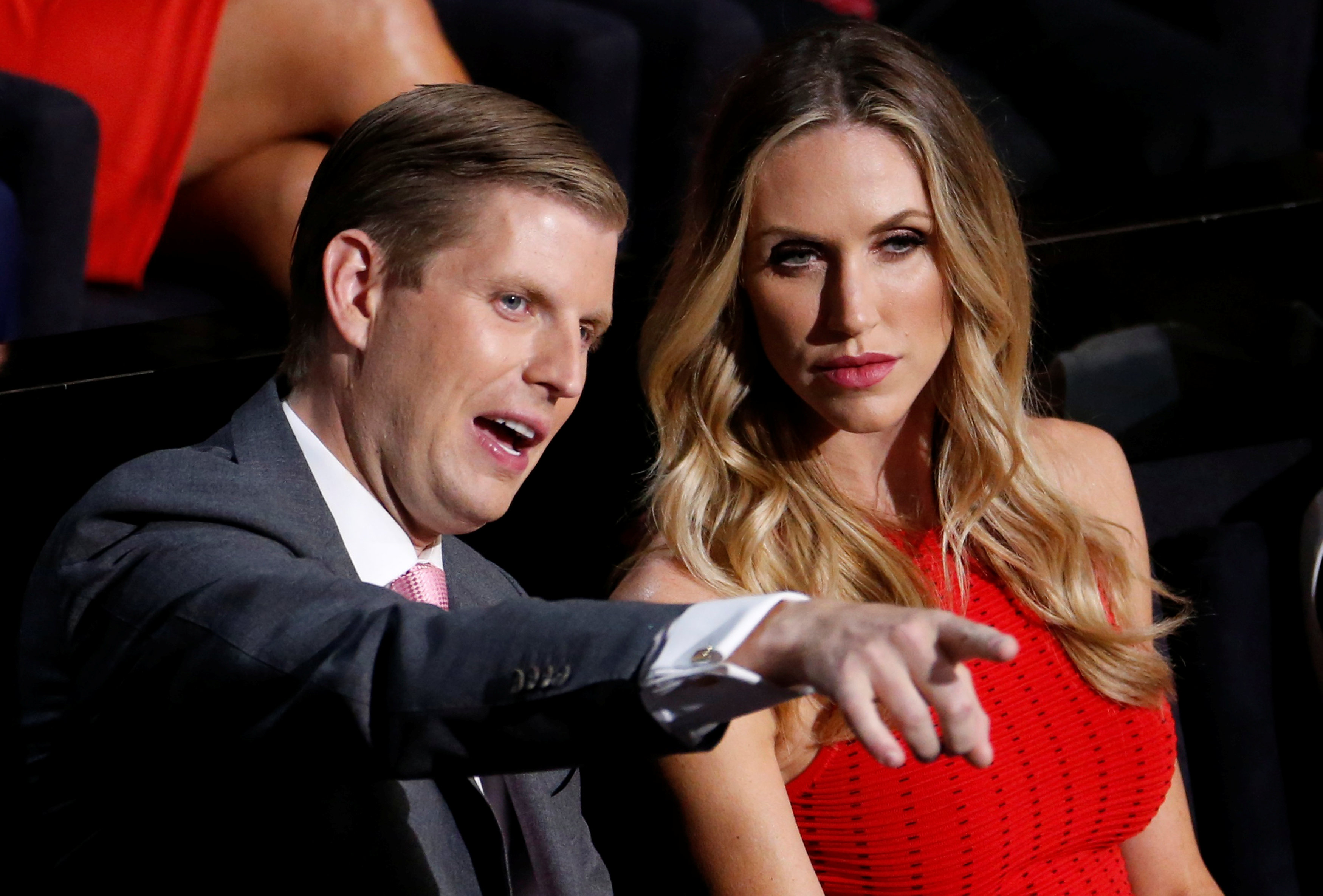 NEW YORK (Reuters) – Eric Trump, the 33-year-old middle son of U.S. President Donald Trump, said on Monday that his wife Lara was expecting to give birth to their first child in September.

“We are adding a boy to #TeamTrump,” Trump wrote on Twitter. “It’s been an amazing year. We are blessed!”

Eric Trump and his wife, formerly Lara Yunaska, married in November 2014 at Trump’s Mar-a-Lago resort in Palm Beach, Florida after dating for six years. Lara is also 33 years old, according to People magazine.

The baby boy, the president’s ninth grandchild, is due in September.

The couple told People they were still deciding on a name for their son.

“We really loved the name Charlie, but we’d already named our dog that, so it’s out,” Eric Trump said.

Eric is the third child born to Donald Trump and his first wife, the former model Ivana Trump.

A resident of New York City, Eric serves as a trustee of the Trump Organization along with his brother, Donald Trump Jr.

The president congratulated his son and daughter-in-law on the pregnancy following the announcement.

“Congratulations Eric & Lara. Very proud and happy for the two of you!,” he wrote on Twitter.

An abortionist who has been operating since the 1980s is facing charges connected to providing abortion-inducing drugs to women who were not actually pregnant.

Nareshkumar G. Patel of Warr Acres, Oklahoma was arrested in his clinic and taken ot the Oklahoma County jail for processing.

“This type of fraudulent activity and blatant disregard for the health and well-being of Oklahoma women will not be tolerated,” said Attorney General Scott Pruitt  “Oklahoma women should be able to trust that the advice they receive from their physicians is truthful, accurate and does not jeopardize their health.”

The investigation was sparked by the death from cancer of a woman named Pamela King.  During her autopsy, it was discovered she had not been pregnant at a time she had an abortion performed by Patel.

An undercover investigation sent in three women who were not pregnant.  Patel told the women after an ultrasound that they were pregnant and charged them $620 for abortion inducing drugs.

Patel has been the center of controversy in the past.  In 1992 he burned 55 fetuses in a field near Shawnee, Oklahoma, and was never charged by police for his action.

A young girl’s decision to give life to her unborn child resulted in her losing her own.

Now a New York man will be going to prison for her killing.

A jury deliberated about an hour before convicting 22-year-old Christian Ferdinand on a second degree murder charge in the death of 14-year-old Shaniesha Forbes.  Ferdinand met the girl on Facebook in 2012 and met up with her for sex.  She text messaged him a few months later saying she was pregnant with his child and would not abort the baby.

“Are you serious? Kill that [expletive],” Ferdinand texted back to her.  He then killed the teen when she met him at his cousin’s house by smothering her with a pillow.  He then stuffed the girl’s body into a suitcase, burned it and then threw it into lake.

“He intentionally smothered a 14-year-old girl to death and burned her body to get rid of the evidence,” prosecutor Robert Walsh told jurors on Monday. “He had a problem that needed solving. He didn’t want to pay child support, and Shaniesha got in the way.”

Ferdinand actually told investigators he didn’t think the killing was a big deal.  He asked them if they could just give him community service for the murder.

He faces 25 years in prison.  Ironically, the medical examiner said it was likely the girl was not pregnant in the first place.

A woman trying to rush to the hospital on foot because she was in labor was robbed at gunpoint yesterday.

The woman was rushing to nearby Anne Arundel Medical Center in Annapolis, Maryland around 4:30 a.m. Sunday morning under assistance of a man when the two gunmen confronted them.

Multiple witnesses called the police who rushed to the scene.  The gunmen fled in a stolen vehicle but were quickly apprehended.  Police were able to recover the weapon used in the robbery.

Devery Kelley, 24, and Cornell Robinson, 44, are being held pending charges.

Mother and child are doing fine according to WJZ, CBS 13.

Rachel Poole, the Texas woman who was beaten and stabbed while on a FaceTime video chat with her soldier husband who was in Afghanistan, has given birth to a healthy baby girl.

31-year-old Rachel Poole was attacked in her home Wednesday night while chatting with her deployed husband. The assailant, Cory Moss, stabbed Rachel with a knife and then beat her severely. She suffered stab wounds, a collapsed lung, dislocated vertebrae and broken bones in her eye socket from the brutal attack. She is unable to see out of one of her eyes.

Moss reportedly owed the Poole’s money for car repairs because he had borrowed one of their cars and wrecked it.

Justin Poole was able to reach Moss’ co-workers at Fort Bliss who captured and held him until police arrived on base. Moss is facing charges of criminal attempted capital murder.

Rachel Poole remains in critical condition at University Medical Center. Her family would not release her prognosis to the press.