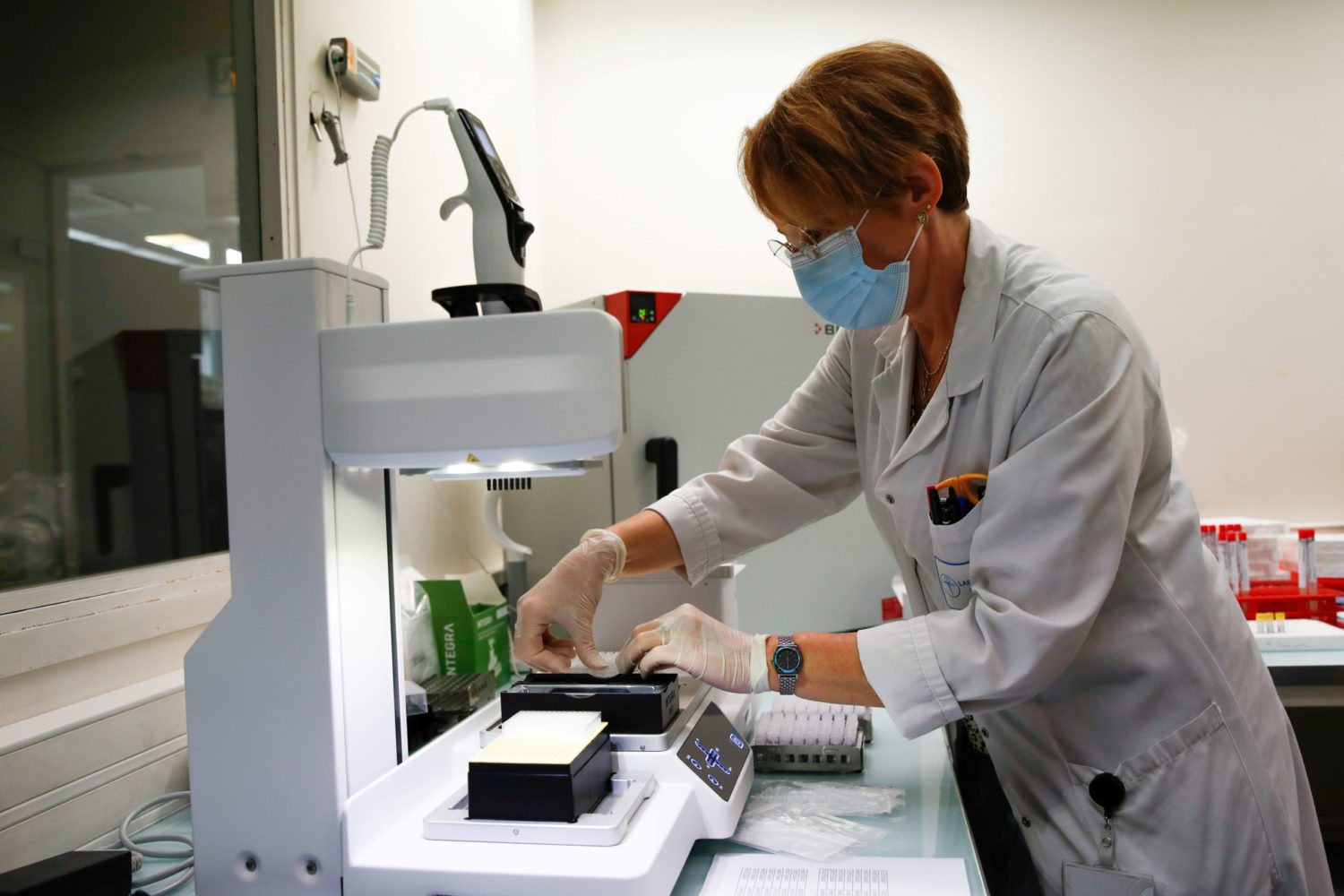 PARIS (Reuters) – Mass testing was meant to be the answer to the second wave. Politicians promised that with enough tests, conducted quickly enough, they could keep the coronavirus in check, without having to resort to lockdowns that crippled economies six months ago.

But so far, with a surge sweeping Europe just as students return to school and university, it hasn’t quite worked out that way. There aren’t enough tests, and they are taking too long.

Pierre-Adrien Bihl, who runs four labs that together conduct 800 tests a day in eastern France, has one explanation for what has gone wrong: a global supply chain that can’t keep up.

French President Emmanuel Macron, like other European leaders, has pressed for a swift increase in tests. His government promises that anyone who needs a test can get one.

But five companies that operate laboratories in Paris and eastern France told Reuters there was simply no way they could work any faster, as long as they are struggling to obtain chemicals and test kits that are mainly produced abroad.

This week, Bihl said, he had to take his diagnostic machine offline for nearly 24 hours, after a four-day delay in the delivery of some single-use parts.

The shutdown forced Bihl to reduce testing appointments until the backlog could be made up, he said, adding that such shutdowns were taking place three or four times a month.

Arthur Clement, who runs four laboratories, said the U.S. manufacturer of his diagnostic machine, Cepheid, was sending him just 300 test kits per month at the end of the summer, as cases surged.

With his labs performing 25,000 tests per month, Clement had to send nearly all of them out to a third party, where they were taking up to 7-10 days to get results. Cepheid did not respond to a request for comment.

Clement ordered a new diagnostic machine from a South Korean manufacturer two months ago, which finally arrived last Friday, and now he says he can perform all tests in-house and deliver results in a day.

In Paris, queues snake out of testing centers each day, with lines forming before sunrise at some. People with COVID symptoms are waiting on average three days for their results, according to official data, though for some the wait can be double.

France is now conducting more than 1.2 million polymerase chain reaction (PCR) tests per week in response to the epidemic, which has killed more than 31,000 people in the country and infected nearly half a million.

The French health ministry denies that there is a nationwide shortage of chemicals. It says there have been localized shortages in some parts of the country, but the overall supply is adequate. Health Minister Olivier Veran has said France has access to supplies of reagents equivalent to double the actual demand for tests.

But laboratories can’t just order chemicals from anywhere: testing machines typically require proprietary chemical kits and tools, some of which can be obtained only from the manufacturer.

The ministry recommends laboratories diversify their suppliers of testing machines, to mitigate the risk of one supply chain becoming blocked. But that means buying extra machines to duplicate capacity, which costs more money and can take months.

Suppliers of the machines to French labs include Cepheid and Becton Dickinson in the United States, Switzerland’s Roche, and France’s Biomerieux and Eurobio Scientific.

Cepheid, Roche and Eurobio Scientific did not respond to requests for comment on the supply of COVID equipment and reagents.

Becton Dickinson told Reuters in an email it was delivering more than 1 million tests per month globally. It acknowledged that this has fallen short of demand, but said it aims to scale up to 1.9 million per month by late 2020.

Biomerieux said its sites in France had spare capacity.

Lionel Barrand, one of the five laboratory operators who spoke to Reuters, said the supply-chain crunch was partly rooted in France’s reliance on imported reagents. He estimated 90% of COVID-19 reagents used in France were sourced overseas.

“We depend heavily on the global market,” said Barrand, who heads a laboratory industry group, the Syndicat National des Jeunes Biologistes.

Some of the French laboratories worry that U.S. suppliers such as Cepheid and Becton Dickinson are prioritizing labs in the United States, where healthcare costs are higher and profit margins bigger.

Becton Dickinson said it allocates test kits using quotas, which are set on the basis of the number of its testing machines in a country and the severity of outbreaks.

“We do not use pricing, margins or profit as a factor in our allocations,” the company said.