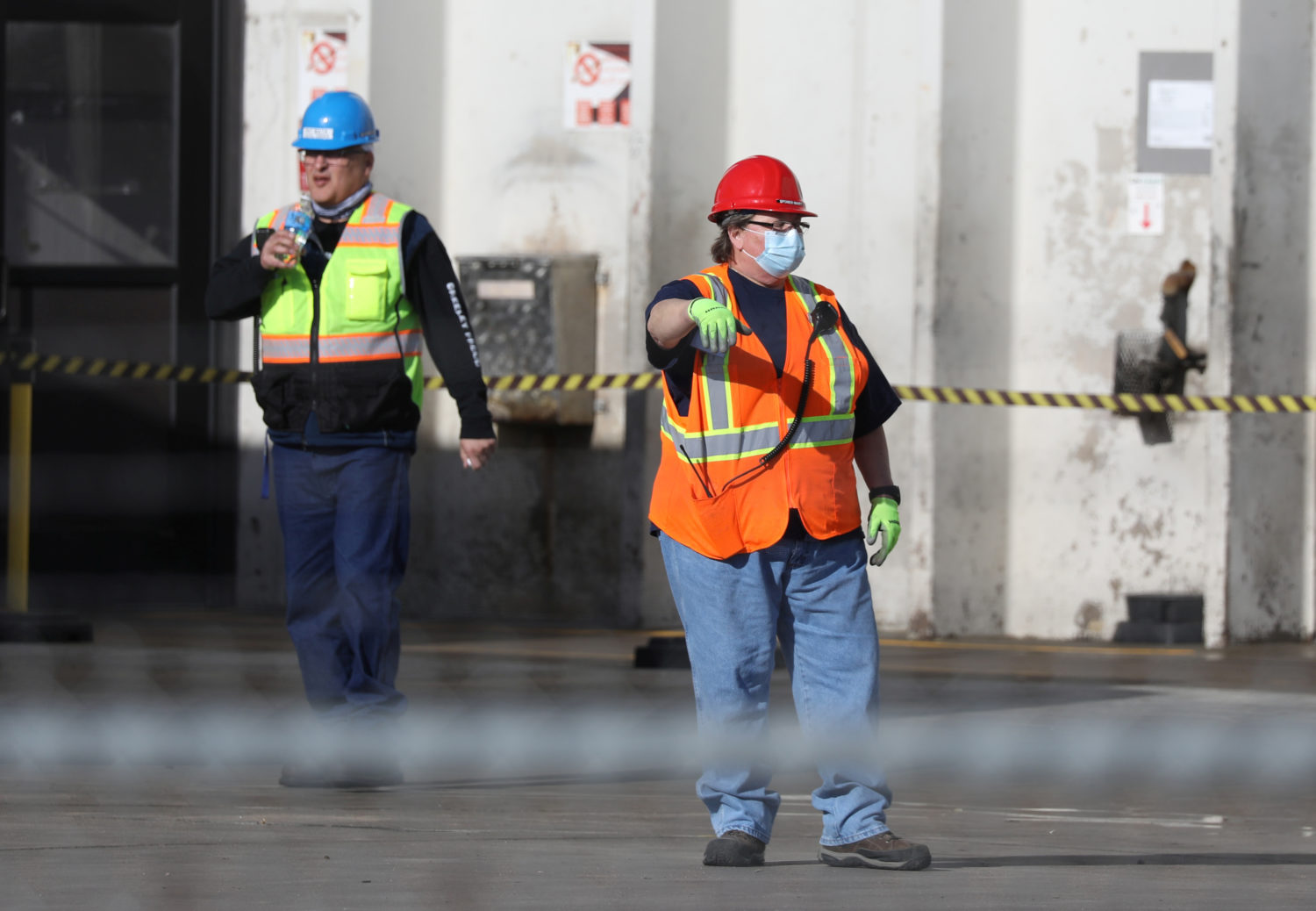 By Tom Polansek and Rod Nickel

CHICAGO/WINNIPEG, Manitoba (Reuters) – At a Wayne Farms chicken processing plant in Alabama, workers recently had to pay the company 10 cents a day to buy masks to protect themselves from the new coronavirus, according to a meat inspector.

In Colorado, nearly a third of the workers at a JBS USA beef plant stayed home amid safety concerns for the last two weeks as a 30-year employee of the facility died following complications from the virus.

And since an Olymel pork plant in Quebec shut on March 29, the number of workers who tested positive for the coronavirus quintupled to more than 50, according to their union. The facility and at least 10 others in North America have temporarily closed or reduced production in about the last two weeks because of the pandemic, disrupting food supply chains that have struggled to keep pace with surging demand at grocery stores.

According to more than a dozen interviews with U.S and Canadian plant workers, union leaders and industry analysts, a lack of protective equipment and the nature of “elbow to elbow” work required to debone chickens, chop beef and slice hams are highlighting risks for employees and limiting output as some forego the low-paying work. Companies that added protections, such as enhanced cleaning or spacing out workers, say the moves are further slowing meat production.

Smithfield Foods, the world’s biggest pork processor, on Sunday said it is shutting a pork plant indefinitely and warned that plant shutdowns are pushing the United States “perilously close to the edge” in meat supplies for grocers.

Lockdowns that aim to stop the spread of the coronavirus have prevented farmers across the globe from delivering produce to consumers. Millions of laborers also cannot get to the fields for harvesting and planting, and there are too few truckers to keep goods moving.

The United States and Canada are among the world’s biggest shippers of beef and pork. Food production has continued as governments try to ensure adequate supplies, even as they close broad swathes of the economy.

The closures and increased absenteeism among workers have contributed to drops in the price of livestock, as farmers find fewer places for slaughter. Since March 25, nearby lean hog futures have plunged 35%, and live cattle prices shed 15%, straining the U.S. farm economy.

North American meat demand has dropped some 30% in the past month as declining sales of restaurant meats like steaks and chicken wings outweighed a spike in retail demand for ground beef, said Christine McCracken, Rabobank’s animal protein analyst.

Frozen meats in U.S. cold storage facilities remain plentiful, but supply could be whittled down as exports to protein-hungry China increase after a trade agreement removed obstacles for American meat purchases.

JBS had to reduce beef production at a massive plant in Greeley, Colorado, as about 800 to 1,000 workers a day stayed home since the end of March, said Kim Cordova, president of the local United Food and Commercial Workers (UFCW) union that represents employees.

“There’s just not enough people,” Cordova said. She added that the union knew of at least 50 cases and two deaths among employees as of Friday.

Plant worker Saul Sanchez, known affectionately as “grandpa” among some co-workers, tested positive for the virus and died on April 7 at 78 years old, according to his daughter, Beatriz Rangel. She said he only went from home to work before developing symptoms, including a low fever.

“I’m heartbroken because my dad was so loyal,” Rangel said.

Brazilian owned JBS confirmed an employee with three decades of experience died from complications associated with COVID-19, without naming Sanchez. The company said he had not been at work since March 20, the same day JBS removed people older than 70 from its facilities as a precaution. He was never symptomatic while at work and never worked in the facility while sick, according to the company.

JBS said it was working with federal and state governments to obtain tests for all plant employees.

Weld County, where the plant is located, had the fourth highest number of COVID-19 cases of any county in Colorado on Friday, according to the state. Health officials confirmed cases among JBS workers.

JBS said high absenteeism at the plant led slaughter rates to outpace the process of cutting carcasses into pieces of beef. The company disputed the union’s numbers on worker absences but did not provide its own. It took steps including buying masks and putting up plexiglass shields in lunch rooms to protect employees, said Cameron Bruett, spokesman for JBS USA.

“MY LIFE IS IN JEOPARDY”

At Wayne Farms’ chicken plant in Decatur, Alabama, some workers are upset the company recently made employees pay for masks, said Mona Darby, who inspects chicken breasts there and is a local leader of hundreds of poultry workers for the Retail, Wholesale and Department Store Union.

“My life is in jeopardy because we’re working elbow to elbow,” she said.

Wayne Farms, with annual sales exceeding $2 billion, is trying to obtain masks to distribute to employees, though supplies are limited, spokesman Frank Singleton said. He said he did not know of any instances where employees were charged for masks.

Workers at a Tyson Foods Inc chicken plant in Shelbyville, Tennessee, bought their own masks when the facility ran out, said Kim Hickerson, who loads chicken on trucks there and is a union leader. Some are talking about quitting because they are scared of getting sick, he said.

Tyson, the top U.S. meat producer, is working to find more personal protective equipment for employees, spokesman Worth Sparkman said. The company increased cleaning at facilities and sought to space out employees, which can both slow production, according to a statement.

Workers have lost their trust in Olymel after an outbreak of the coronavirus closed a plant in Yamachiche, Quebec, according to union spokeswoman Anouk Collet. “They do not feel that the company took all the measures they could have taken to keep them safe,” she said.

Company spokesman Richard Vigneault said the plant will reopen on Tuesday with new measures in place, such as separating panels, masks and visors.

Marc Perrone, international president of the UFCW union, said meat plant workers are increasingly weighing concerns about their own safety and their responsibility to produce food.

“If we don’t take care of the food supply, the American people are going to panic,” he said.

(Reporting by Tom Polansek in Chicago and Rod Nickel in Winnipeg, Manitoba; Editing by Caroline Stauffer and Edward Tobin)