Pastor Jim and Lori Bakker welcome special guest John Shorey as they discuss what Jesus calls “The Time of Sorrows” in Matthew 24. Could we be seeing the beginning of that period?
END_OF_DOCUMENT_TOKEN_TO_BE_REPLACED

Pastor Jim and Lori Bakker welcome special guest John Shorey as they discuss what Jesus calls “The Time of Sorrows” in Matthew 24. Could we be seeing the beginning of that period?
END_OF_DOCUMENT_TOKEN_TO_BE_REPLACED

Pastor Jim and Lori Bakker dissect David Wilkerson’s 1974 book, The Vision and Beyond, discussing its relevancy to current events and how it is pointing us to what we can expect in the future.
END_OF_DOCUMENT_TOKEN_TO_BE_REPLACED 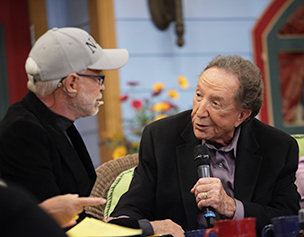 Pastor Jim & Lori Bakker welcome Jerry & Sandi Barnard and Luke Holter as they discuss the power of Restoration and God’s Love for Day 1 on The Jim Bakker Show. END_OF_DOCUMENT_TOKEN_TO_BE_REPLACED

There is so much happening in the Spirit right now.  God has been speaking to me about so many things that I need to get out – need to tell everyone – need to warn people about.  Even the Thanksgiving holiday has given me no reprieve on sounding the alarm!  The time is short folks!  We are on the verge of something really BIG!  I feel it in my spirit and I know it because I know His voice!

Others know His voice too.  When Rick Joyner came last week, he said he was almost “desperate” to get back here to Morningside and tell our listening audience “AMEN – it’s time to store food and water!”  Neither of us know precisely what is coming, but we know it is BIG!  We are pleading with people to get ready!

We talked a lot about this nation and how it has turned away from God.  The scriptures are clear:  When a nation honors God, they will be blessed (Psalm 33:12).  When they turn against God, the scriptures say they will perish! (Deuteronomy 8:19,  Jeremiah 7:6, 25:6)

Rick had a lot to say about the condition of the nation and the church.  Here are just a few of the outstanding statements he urged our listening audience to pay attention to:

“Our future can be much brighter than our past. I’m talking about America.”

“The net worth of America is not measured in dollars. It’s the industry. It’s the initiative. It’s the people. It’s the freedoms that release these things.”

“I’m confident that if we will humble ourselves, if we follow 2 Chronicles 7:14, the Lord will not only get us out of this, it will be a reset. It will be like a Jubilee.”

“When a nation keeps taking stands against God and against Israel – it’s dangerous!  We don’t honor God as a holy God.”

“We don’t even want the mention of Him in our history or in our public places… and He’s left!”

The ensuing meltdown is continuing and Rick believes we are in the worst jeopardy of our nation’s history!  This meltdown is the direct result of us turning from solid Biblical foundations, solid Biblical principles that He gave us as a nation!

The only answer is to get back to them.  You can go back and see it has been the departure from those founding principles that has led us to all of the crises we are now in.

“Outside, people are saying now it’s July when everything starts unraveling really fast.”

“Some of our senators and congressmen said — they didn’t say it publically — but they said, “We’re now hoping to make it to January.”

“Our real debt right now is not just 15 trillion or 14 trillion. Add the entitlements on there… It goes way past 65 trillion.”

“2 Chronicles 7:14 says: “If MY people.”  We need to understand that it’s us, not the heathen that needs to humble ourselves, pray, seek His face, and turn from our wicked ways so that He can come and heal our land.”

If you know Rick the way I know him, he doesn’t alter his message or adjust it for anyone or anything.  He says what he means and means what he says.  I respect him for that and I know him to be a solid man of God with a prophetic voice you can count on.  He hears from God.

I can’t say this urgently enough:  It’s time for understanding of the Times and Seasons.  It’s time to be like the Sons of Issachar who knew the Times and the Seasons and had wisdom about how to prepare for them. There’s something coming – it’s BIG.  Get yourself and your family prepared.  Have something extra to give to others so that you can show them the love of God during hard times.  Do it NOW!

“If just the evangelical church would say, “Let’s get ready to take care of ourselves and just 10 percent more…” We could take care of 50 percent of the people in America.”