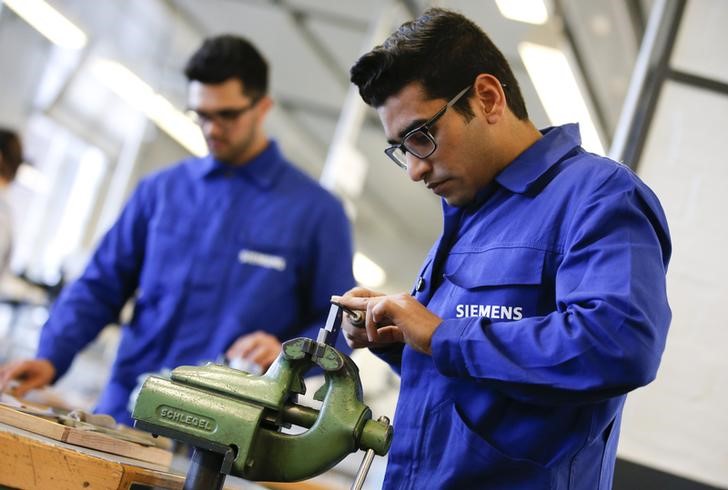 By Georgina Prodhan and Andreas Rinke

FRANKFURT/BERLIN (Reuters) – Chancellor Angela Merkel said on Thursday that Germany needed “viable solutions” to integrate refugees into the workforce faster after she met blue-chip companies that have hired just over 100 refugees since around a million arrived last year.

Merkel, her popularity undermined by her open-door policy, summoned the bosses of some of Germany’s biggest companies to Berlin on Wednesday to account for their lack of action and exchange ideas about how they can do better.

Many of the companies contend that a lack of German-language skills, the inability of most refugees to prove any qualifications and uncertainty about their permission to stay in the country mean there is little they can do in the short term.

Merkel told rbb-inforadio that if needed, special provisions could be developed to speed up the integration of refugees into the workforce, but she acknowledged this would still take time.

“Many are in integration courses or waiting to get on them. So I think we will need to show some patience, but must be ready at any time to develop viable solutions,” she said.

A participant at the meeting with Merkel said company executives from DAX firms and small businesses discussed their opinions for 2-1/2 hours and came to the conclusion: “We want to do this”. When talking about the refugee influx, Merkel frequently says: “Wir schaffen das” or “we can do this”.

The meeting spurred some firms to announce more action to help get refugees into the workforce.

“Wir Zusammen” or “We Together”, an integration initiative of German companies, said much had been achieved to support the arrival of the newcomers but now they had to turn their attention to integrating them into the workforce.

“Now it’s about motivating those companies that are not yet active,” it said in a statement after the summit.

A survey by Reuters of the 30 companies in Germany’s stock index last week found they could point to just 63 refugee hires in total.

Of those, 50 were employed by Deutsche Post DH, which said it applied a “pragmatic approach” and deployed the refugees to sort and deliver letters and parcels.

“Given that around 80 percent of asylum seekers are not highly qualified and may not yet have a high level of German proficiency, we have primarily offered jobs that do not require technical skills or a considerable amount of interaction in German,” a company spokesman said by email.

Several of the 27 firms who responded said they considered it discriminatory to ask about applicants’ migration history, so they did not know whether they employed refugees or how many.

What is clear is that early optimism that the wave of migrants might boost economic growth and help ease a skills shortage in Germany – where the working-age population is projected to shrink by 6 million people by 2030 – is evaporating.

“The employment of refugees is no solution for the skills shortage,” industrial group Thyssenkrupp’s Chief Executive Heinrich Hiesinger said earlier this month.

Most large German companies, especially those in manufacturing, prefer to hire through structured apprenticeship programs, in which they train young people for up to four years for highly skilled and sometimes company-specific jobs.

But the recent arrivals from Syria, Iraq, Afghanistan and elsewhere are mainly ill-prepared for such training, they say.

The DAX-listed companies surveyed by Reuters were able to identify about 200 apprentices in this or last year’s intake. Many will have been through months of pre-training especially designed for migrants by large companies, such as engineering group Siemens, Mercedes maker Daimler, or automotive technology firm Continental.

Two Syrian interns visited by Reuters at a Siemens power-plant construction site in April applied for apprenticeships, but could not immediately be accepted because they are still in the process of proving their school-leaving qualifications. One is meantime doing temporary work in IT and the other taking German classes.

It is simply too soon to expect large numbers of refugees to have been hired yet, most German companies say.

“Our experience is that it takes a minimum of 18 months for a well-trained refugee to go through the asylum procedure and learn German at an adequate level in order to apply for a job,” said a spokeswoman for Deutsche Telekom.

ISIS has recruited at least 400 children since the start of the year and has given them military training and indoctrination into their extremist brand of Islam.

The Syrian Observatory for Human Rights said the children were recruited near schools and mosques where ISIS has carried out killings and punishments on people who do not live up to their extremist ideology.  In many cases, the children go with the terrorists over their objections of their parents.

One boy is believed to be the half-brother of Mohamed Merah, who killed three soldiers, a Rabbi and three Jewish children in France in 2012.

“They use children because it is easy to brainwash them. They can build these children into what they want, they stop them from going to school and send them to IS schools instead,” said Rami Abdulrahman, head of the British-based Observatory.

The group said that ISIS has had children carry out beheadings and executions as a way to show them the “power” of ISIS.  The children are also being used as informants after being returned to their families.  They report on actions within their communities to the ISIS leadership.