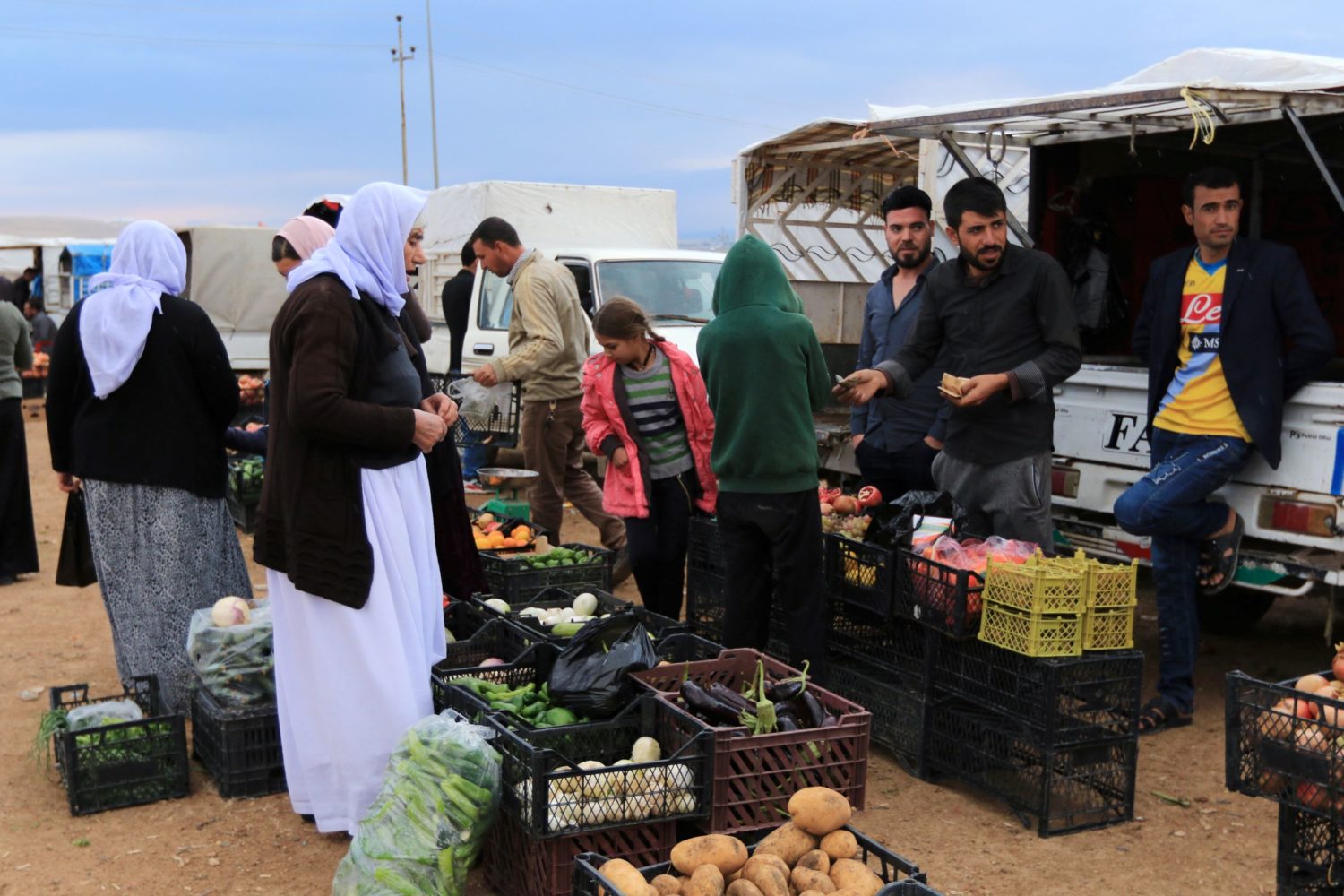 For Yazidis, Baghdadi’s death ‘doesn’t feel like justice yet’
By Raya Jalabi

Jamila, who asked not to be identified by her last name, is one of thousands of women from the Yazidi minority religion who were kidnapped and raped by IS after it mounted an assault on the Yazidi homeland in northern Iraq in August 2014.

“Even if Abu Bakr al-Baghdadi is dead, it doesn’t mean Islamic State is dead,” Jamila told Reuters outside the tent that is now her temporary home in the Sharya camp for displaced Yazidis in Iraq’s Kurdistan Region.

“This doesn’t feel like justice yet,” she said. “I want the men who took me, who raped me, to stand trial. And I want to have my voice heard in court. I want to face them in court … Without proper trials, his death has no meaning.”

Baghdadi, who had led IS since 2010, detonated a suicide vest after being cornered in a raid by U.S. special forces in northwest Syria, U.S. President Donald Trump announced on Sunday.

Inspired by his edicts to enslave and slaughter Yazidis, whom IS regard as infidels, his followers shot, beheaded and kidnapped thousands in a rampage which the United Nations called a genocidal campaign against them.

Along with thousands of other women and children, Jamila said she was enslaved by the militants and kept in captivity for five months in the city of Mosul along with her sister.

She was just 14 when she was seized. But her problems did not end after she and her sister managed to escape when, she said, their guards were high on drugs.

“When I first came back, I had a nervous breakdown and psychological problems for two years, so I couldn’t go to school,” she said.

Now instead of working or catching up on her years of lost schooling, she looks after her mother, with whom she shares her cramped tent at the camp.

“My mother can’t walk and has health problems so I have to stay and take care of her because my older siblings are in Germany,” she said.

NO PLANS TO GO HOME

The prospect of going home to Sinjar in northern Iraq is not an option for Jamila, and many others. The city still lies in ruin four years after the IS onslaught, and suspicion runs deep in the ethnically mixed area.

“Sinjar is completely destroyed. Even if we could go back, I wouldn’t want to because we’d be surrounded by the same Arab neighbors who all joined IS in the first place, and helped them kill us (Yazidis),” she said.

Thousands of men are being tried in Iraqi courts for their ties to IS. Iraq has so far not allowed victims to testify in court, something community leaders and human rights groups say would go a long way in the healing process.

“It is deplorable that not a single victim of Islamic State’s horrific abuses including sexual slavery has gotten their day in court,” said Belkis Wille, Iraq Researcher for Human Rights Watch. “Iraq’s justice system is designed to allow the state to exact mass revenge against suspects, not provide real accountability for victims.”

For some of the nearly 17,000 Yazidis at the Sharya camp, Baghdadi’s death was a first step in that direction though they fear the IS fighters who are still alive.

Mayan Sinu, 25, can dream of a new life after the camp as she and her three children have been granted asylum by Australia. But she also wants the men who shot her husband in the legs and dragged him off to be brought to justice. He has been missing since the incident five years ago.

“I hope Baghdadi is suffering more than we ever did, and my God we suffered,” said Sinu. “I wish he (Baghdadi) hadn’t blown himself up so I could have slaughtered him myself with my bare hands.” 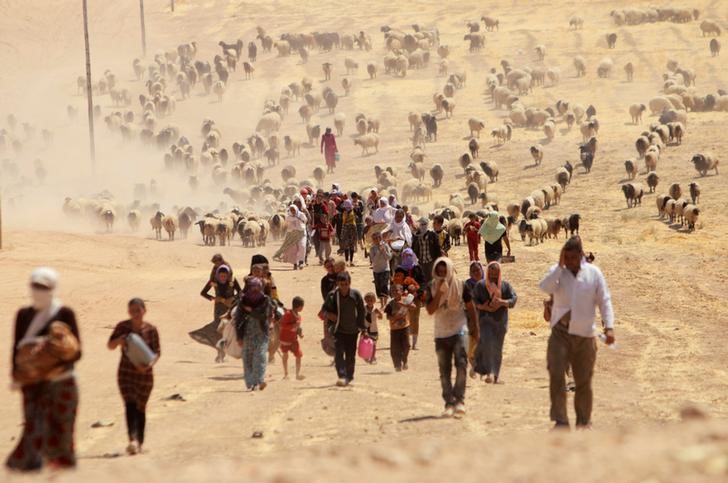 BAGHDAD (Reuters) – Thousands of Yazidis are being held captive by Islamic State in Syria where many are used for sexual slavery or forced to fight for the group, the United Nations said on Wednesday, on the second anniversary of what investigators termed a genocide.

A U.N.-appointed commission of independent war crimes investigators said in June that Islamic State was committing genocide against the Yazidis, a religious community of 400,000 people in northern Iraq, beginning with an attack on their city of Sinjar on Aug. 3, 2014.

The U.N. said most of the captives have been taken to neighboring Syria “where Yazidi women and girls continue to be sexually enslaved and Yazidi boys indoctrinated, trained and used in hostilities.”

Around 3,200 Yazidi women and girls are being held captive, and thousands of men and boys are missing, the U.N. said.

The designation of genocide, rare under international law, would mark the first recognized genocide carried out by non-state actors, rather than a state or paramilitaries acting on its behalf.

Historical victims of genocide include Armenians in 1915, Jews during the Nazi Holocaust, Tutsis in Rwanda in 1994 and Bosnian Muslims in Srebrenica in 1995. 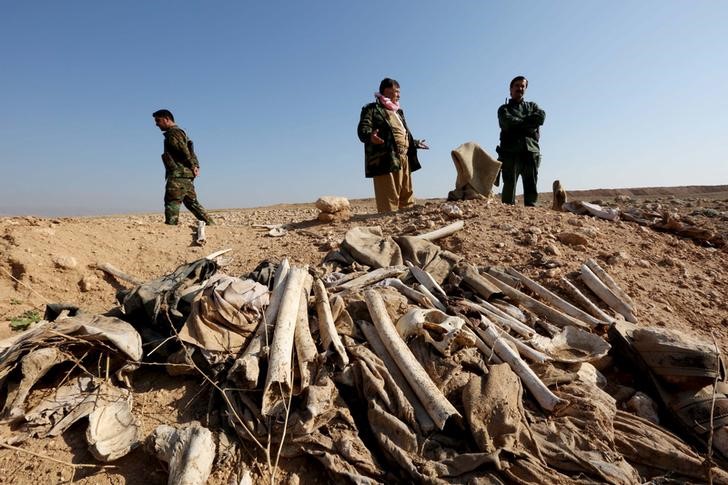 GENEVA (Reuters) – Islamic State is committing genocide against the Yazidis in Syria and Iraq to destroy the religious community of 400,000 people through killings, sexual slavery and other crimes, United Nations investigators said on Thursday.

Their report, based on interviews with dozens of survivors, said that the Islamist militants had been systematically rounding up Yazidis in Iraq and Syria since August 2014, seeking to “erase their identity” in a campaign that met the definition of the crime as defined under the 1948 Genocide Convention.

“The genocide of the Yazidis is ongoing,” it said.

The 40-page report, entitled “They Came to Destroy: ISIS Crimes against the Yazidis”, sets out a legal analysis of Islamic State intent and conduct aimed at wiping out the Kurdish-speaking group, whom the Sunni Muslim Arab militants view as infidels and “devil-worshippers”.

The Yazidis are a religious sect whose beliefs combine elements of several ancient Middle Eastern religions.

“The finding of genocide must trigger much more assertive action at the political level, including at the (U.N.) Security Council,” Paulo Pinheiro, chairman of the commission of inquiry, told a news briefing.

Commission member Vitit Muntarbhorn said it had “detailed information on places, violations and names of the perpetrators”, and had begun sharing information with some national authorities seeking to prosecute foreign fighters.

The four independent commissioners urged major powers to rescue at least 3,200 women and children still held by Islamic State (IS or ISIS) and to refer the case to the International Criminal Court (ICC) for prosecution.

“ISIS made no secret of its intent to destroy the Yazidis of Sinjar, and that is one of the elements that allowed us to conclude their actions amount to genocide,” said another investigator, Carla del Ponte.

“Of course, we regard that as a road map for prosecution, for future prosecution. I hope that the Security Council will do it because it is time now to start to obtain justice for the victims,” added del Ponte, a former U.N. war crimes prosecutor.

Islamic State, which has proclaimed a theocratic caliphate – based on a radical interpretation of Sunni Islam – in areas of Iraq and Syria under its control, systematically killed, captured or enslaved thousands of Yazidis when it overran the town of Sinjar in northern Iraq in August 2014.

At least 30 mass graves have been uncovered, the report said, calling for further investigations.

Islamic State has tried to erase the Yazidis’ identity by forcing men to choose between conversion to Islam and death, raping girls as young as nine, selling women at slave markets, and drafting boys to fight, the U.N. report said.

Yazidi women are treated as “chattel” at slave markets in Raqqa, Homs and other locations, and some are sold back to their families for $10,000 to $40,000 after captivity and multiple rapes, according to the report.

“No other religious group present in ISIS-controlled areas of Syria and Iraq has been subjected to the destruction that the Yazidis have suffered,” the report added. 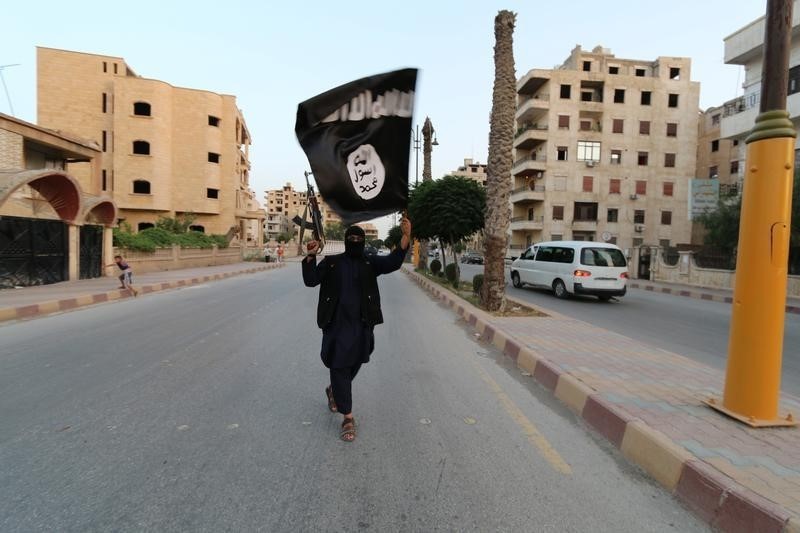 LONDON (Thomson Reuters Foundation) – It was a “black morning” two years ago when Islamic State militants seized the Yazidi town of Sinjar in northwest Iraq, abducting thousands of civilians including a 15-year-old girl and 27 members of her family.

The teenager, Nihad Barakat Shamo Alawsi, was taken to Syria and then to the Islamic State stronghold of Mosul in northern Iraq, she told an event in London on Wednesday.

“They raped us, they killed our men, they took our babies away from us,” Alawsi, now 17, said at the event organized by the UK-based AMAR Foundation, a charity that provides education and healthcare in the Middle East.

“The worst thing was the torture in Mosul. We were beaten and raped continuously for two weeks,” she said, speaking through an interpreter. “Girls were taken from their families and raped constantly and then they were handed out to “emirs.””

The Sunni militants captured around 5,000 Yazidi men and women in summer 2014. Some 2,000 have managed to escape or have been smuggled out of Islamic State’s self-proclaimed caliphate in Iraq and Syria, activists say.

Islamic State considers the Yazidis to be devil-worshippers. The ancient Yazidi faith blends elements of Christianity, Zoroastrianism and Islam.

The United Nations says Islamic State still holds an estimated 3,500 people captive in Iraq, the majority of them women and girls from the Yazidi community.

Alawsi said a man who took her as a slave died a few weeks later, and she was sold to another man who already had a wife and another Yazidi sex-slave. He beat and raped her and a month later she became pregnant.

“I thought the child I was carrying was a member of Daesh and would become a Daesh criminal when he grew up,” Alawsi said quietly, using a pejorative Arabic name for Islamic State.

Alawsi gave birth to a baby boy, but three months later she managed to escape after the baby’s father decided to marry her to his cousin.

“I managed to make a phone call to my family with someone’s help, and I managed to escape, but I had to leave the baby behind,” she said.

Most of the Yazidi population, numbering around half a million, are displaced in camps in Iraq’s northern Kurdistan.

Alawsi now lives in one of the camps with her mother, father and siblings, and works with AMAR, volunteering to come to London to speak of her people’s plight. Two of her brothers and two sisters are still held by Islamic State.

“It’s not a life, we are not living a life until the rest of our people are released by Daesh,” Alawsi said.

“I beg you to help my people, to save them from Daesh, and to free especially the sex slaves, the young girls and children that have been taken.”