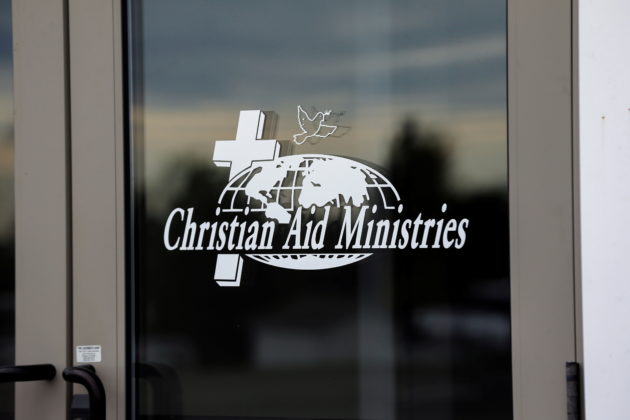 A sign on the door to the entrance of the home office of Christian Aid Ministries in Millersburg, Ohio, U.S., October 17, 2021. REUTERS/Aaron Josefczyk

PORT-AU-PRINCE (Reuters) – Haitians on Monday joined a nationwide general strike to protest a growing wave of kidnappings, days after the abduction of a U.S.-based group of missionaries fueled international concerns over gang violence in the crisis-stricken Caribbean nation.

Ohio-based Christian Aid Ministries on Sunday said the 16 Americans and one Canadian were in Haiti to visit an orphanage when they were abducted near the capital, Port-au-Prince, a crime that security experts suspect was carried out by a gang known as 400 Mawozo.

Haitian authorities have remained silent about the incident, and the whereabouts of the group of missionaries, which includes women and children, remains unknown.

The streets of Port-au-Prince were empty on Monday morning, with shops and schools closed as part of the strike first called by transportation industry leaders – whose workers are among the most common targets of gang abductions.

Other private-sector businesses later said they were joining the strike to protest the constant kidnappings and the government’s systematic incapacity to address it.

Activists have called for street demonstrations against crime and kidnappings on Monday. A rally is also planned to protest an increase in service fees on cellphone-based money transfers, which have become a popular way to make payments.

The country’s precarious security situation has taken a turn for the worse since the July assassination of President Jovenel Moise.

The crisis has become a major issue for the United States, with large numbers of Haitian migrants arriving at the U.S.-Mexico border last month, only to be met with a wave of deportations.