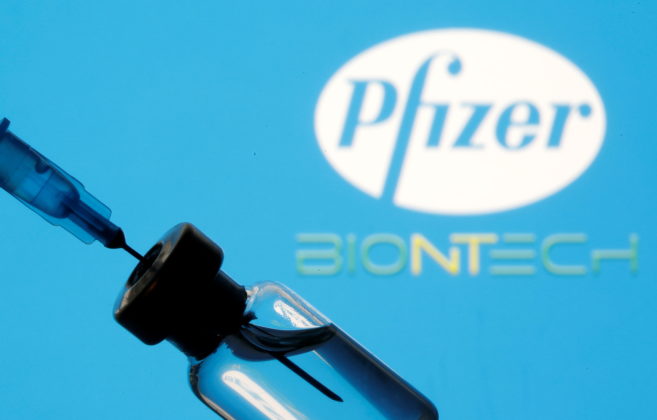 FILE PHOTO: A vial and sryinge are seen in front of a displayed Pfizer and Biontech logo in this illustration taken January 11, 2021. REUTERS/Dado Ruvic

The variant of the new coronavirus identified in South Africa can resist, or “escape,” antibodies that neutralize earlier versions of the virus, scientists have found. It “exhibits complete escape” from three classes of monoclonal antibodies manufactured for treating COVID-19 patients, and it shows “substantial or complete” resistance to neutralizing antibodies in blood donated by COVID-19 survivors, the scientists reported on Tuesday on bioRxiv ahead of peer review. Similarities between the South Africa variant and another variant identified in Brazil suggest the Brazilian variant will show similar resistance, they added. Liam Smeeth of the London School of Hygiene and Tropical Medicine, who was not involved in the study, noted that these were laboratory tests, and it would be unwise to extrapolate the findings to humans at this point. “The data do raise the possibility that the protection gained from past infection with COVID-19 may be lower for re-infection with the South African variant,” he said. “The data also suggest that the existing vaccines could be less effective against the South African variant.” He called for large studies among populations where the variant is common.

The COVID-19 vaccine from Pfizer Inc and BioNTech SE is likely to protect against the more infectious variant of the virus discovered in Britain and now spreading around the world, according to laboratory tests. Researchers took blood samples from 16 people who had received the vaccine and exposed the blood to a synthetic virus, or pseudovirus, that was engineered to have 10 mutations found in the UK variant. The antibodies that had developed in response to the vaccine effectively neutralized the pseudovirus, according to a report posted on Tuesday on bioRxiv ahead of peer review. “This makes it very unlikely that the UK variant will escape from the protection provided by the vaccine,” said Jonathan Stoye, a virus scientist at Britain’s Francis Crick Institute who was not involved in the research. Similar experiments are needed with the more concerning variant first found in South Africa, he suggested. AstraZeneca Plc, Moderna Inc and CureVac NV are also testing whether their respective vaccines will protect against the fast-spreading variants.

Immune system will remember how to make COVID-19 antibodies

People who have recovered from COVID-19 can likely mount a fast and effective response to the virus if they encounter it again because their immune system’s “B cells” will remember how to make the antibodies needed to fight it, a new study shows. Researchers tracked 87 COVID-19 survivors for six months and found that while levels of antibodies to the virus may decline over time, the number of memory B cells remains unchanged. The antibodies produced by these cells are more potent than the patients’ original antibodies and may be more resistant to mutations in the spike protein the virus uses to break into cells, they said. For example, they found, the antibodies could recognize and neutralize at least one of the mutations in the South African variant of the virus that has caused concern among health experts. Even if antibody levels fall, B cells will remember how to make them when necessary, according to study leader Michel Nussenzweig of Rockefeller University, whose findings were reported on Monday in Nature. If this is true at six months, as in this study, it is safe to assume it is probably still true for longer periods, he added. People who have recovered from COVID-19 “may become infected but the immune system will be prepped to fight off the infection,” Nussenzweig said.

Mortality higher when ICUs are packed with COVID-19 patients

The more full an intensive care unit (ICU) is with COVID-19 patients, the higher the mortality rate among those patients, new data suggest. When researchers tracked outcomes of 8,515 COVID-19 patients admitted to 88 U.S. Veterans Affairs hospitals in 2020, they found that survival rates improved between March and August. Throughout the study period, however, the risk of death was nearly double when at least 75% of ICU beds were filled with COVID-19 patients, compared to when they accounted for no more than 25% of ICU beds. COVID-19 mortality “increases during periods of peak demand,” said Dr. Dawn Bravata of the Richard L Roudebush VA Medical Center in Indianapolis who co-led the study published on Tuesday in JAMA Network Open. “The more the public can do to avoid infections, the better,” she added. In addition, Bravata said, “facilities within a healthcare system or within a geographic region should collaborate to triage critically ill patients with COVID-19 to sites with greater ICU capacity to reduce strain on any one facility.”