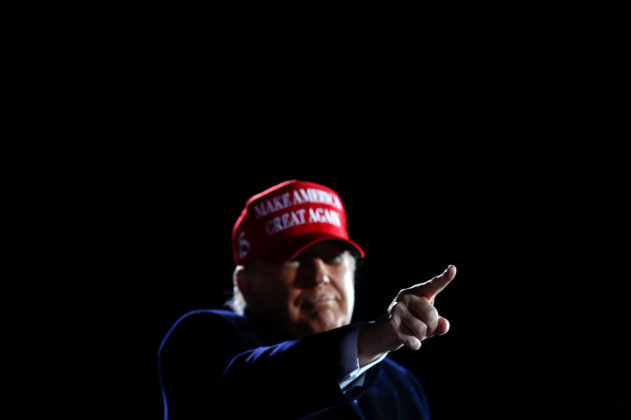 (Reuters) – U.S. President Donald Trump and Democratic challenger Joe Biden will hold dueling prime-time town halls on Thursday instead of their second presidential debate, which was canceled after Trump declined to take part in a virtual matchup.

With less than three weeks to go until the Nov. 3 vote, the Republican president is searching for ways to change the dynamics of a race in which Biden has a double-digit advantage in some national polls.

Nearly 15 million Americans, a record for this date, have cast ballots, according to the U.S. Elections Project at the University of Florida, as voters seek to avoid in-person lines on Election Day because of concerns about the novel coronavirus.

North Carolina, a highly competitive state, began more than two weeks of in-person early voting on Thursday. Local news reports showed long lines of voters eager to cast ballots, and Trump was due to hold an afternoon rally in Greenville in the eastern part of the state.

Trump’s campaign is counting on a surge of last-minute votes. But Reuters/Ipsos polling conducted between Oct. 9 and Oct. 13 shows there are far fewer undecided likely voters this year – around 8% – and they are just as likely to pick Biden as they are Trump.

Four years ago at this stage of the campaign, more than twice as many people were similarly wavering between Trump and his Democratic opponent, Hillary Clinton.

The Reuters/Ipsos polling shows Biden holding a 10 percentage-point lead nationally, with a tighter margin in the battleground states that will help decide the election.

Both candidates have been visiting those states this week, with Trump holding rallies in Florida, Pennsylvania and Iowa and Biden traveling to Ohio and Florida.

Trump has pulled into a statistical tie with Biden in Florida, a key battleground, with 47% support versus Biden’s 49%, and a credibility interval of 4 points, a Reuters/Ipsos opinion poll showed.

Thursday’s town halls, in which each candidate will field questions from voters, will take place at 8 p.m. EDT (0000 GMT), with Trump on NBC from Miami and Biden on ABC from Philadelphia.

Trump pulled out of the scheduled debate when the commission in charge of organizing the event said it would be held virtually after the president contracted the coronavirus. A final debate is still scheduled for Oct. 22 in Nashville, Tennessee.

On Thursday, the Biden campaign said two people involved in the campaign had tested positive for COVID-19, including one on the staff of U.S. Senator Kamala Harris, Biden’s running mate.

Although neither Biden nor Harris was in close contact with the people, the campaign said it was cancelling Harris’ travel until after Sunday, “in line with our campaign’s commitment to the highest levels of precaution.”

Trump has returned to the campaign trail after spending several days being treated for the virus in a military hospital.

NBC said on Wednesday that Clifford Lane, clinical director at the National Institutes of Health, and the government’s top infectious disease specialist, Anthony Fauci, had concluded “with a high degree of confidence” that Trump was no longer “shedding infectious virus.”

The election could be the most closely contested in recent memory due to a deeply divided electorate and the possibility that Trump will challenge widely used mail-in ballots, claiming without evidence they are fraudulent.

(Reporting by Trevor Hunnicutt and Chris Kahn in New York and Doina Chiacu and James Oliphant in Washington; Writing by Joseph Ax and Sonya Hepinstall; Editing by Colleen Jenkins and Matthew Lewis)