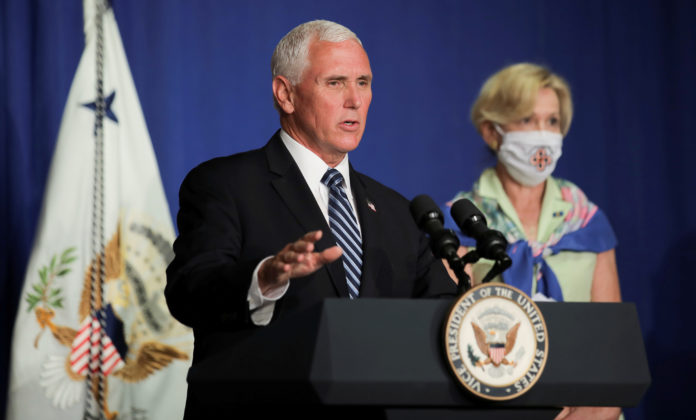 WASHINGTON (Reuters) – U.S. President Donald Trump on Wednesday threatened to cut off funding to schools that do not open in the fall and criticized a federal health agency’s guidelines for reopening schools as “very tough & expensive.”

The Republican president, who is seeking re-election in November, accused Democrats of wanting to keep schools shut for political reasons, despite a surge in coronavirus cases across the country.

“The Dems think it would be bad for them politically if U.S. schools open before the November Election, but is important for the children & families. May cut off funding if not open!” Trump said on Twitter, pointing to schools reopening in some European countries with no problems.

It was not clear what specific federal aid the Republican president had in mind. States are responsible for primary and secondary education under the U.S. Constitution, but the federal government provides some supplementary funding.

“I disagree with @CDCgov on their very tough & expensive guidelines for opening schools. While they want them open, they are asking schools to do very impractical things. I will be meeting with them!!!” Trump said in a separate Twitter post.

The White House did not elaborate on which CDC guidelines Trump took issue with.

The CDC has recommended a number of considerations for schools, including testing, dividing students into small groups, serving packaged lunches in classrooms instead of cafeterias, and minimizing sharing of school supplies. It advised sneeze guards and partitions be put in place when social distancing is not possible, and that seats be spaced at least six feet apart.

“It’s time for us to get our kids back to school,” Vice President Mike Pence said after a White House coronavirus task force meeting at the Department of Education on Wednesday.

Pence said the CDC plans to issue new guidelines on schools and stressed the agency’s guidelines were not meant to replace local school considerations and decision-making.

On Tuesday, Trump held meetings about school re-openings at the White House and said he would pressure state governors to open schools in the fall.

New York Governor Andrew Cuomo retorted on Wednesday that the federal government has no authority on schools and his state will announce reopening plans in the first week of August.

Business and conservative groups have urged reopening schools safely as important to getting parents back to work and reviving the U.S. economy.

Educators say socialization and other benefits such as school food programs are critically important. Experts have also shown online learning exacerbates the divide between poorer and more wealthy Americans, who have greater access to technology.

The alarming surge in cases in the United States, however, has raised concerns about the increased risk of spread of the virus by children to vulnerable adults at home as well as to older teachers and school staff.

New Jersey Governor Phil Murphy said on Wednesday he planned to reopen state schools in the fall, but reserved the right to “tweak that if it means saving lives.”

In Los Angeles, the top public health official said the planned reopening of primary and secondary schools in the fall is at risk. “Every single school district at this point needs to have plans in place to continue distance learning for 100% of the time,” Public Health Director Barbara Ferrer told officials in a private conference call reported by the Los Angeles Times.