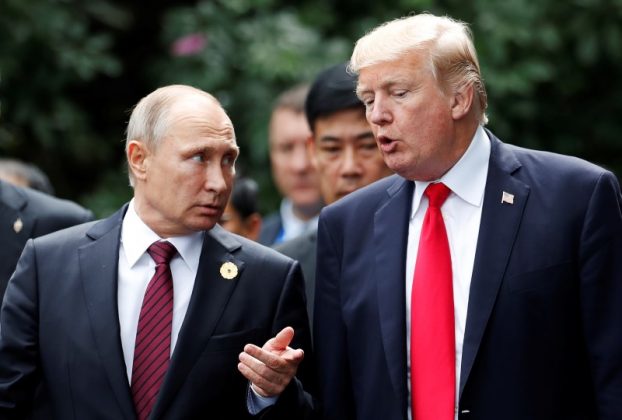 WASHINGTON (Reuters) – U.S. President Donald Trump, who complained last month that Moscow was “not helping us at all with North Korea,” told Russian President Vladimir Putin on Monday that more needs to be done to scrap Pyongyang’s nuclear program, the White House said.

“President Trump reiterated the importance of taking further steps to ensure the denuclearization of North Korea,” the White House said in a statement about the call with Putin.

In an interview with Reuters last month, Trump accused Russia of helping North Korea evade international sanctions meant to punish Pyongyang for its pursuit of a nuclear-armed missile capable of reaching the United States.

“Russia is not helping us at all with North Korea,” Trump told Reuters.

Moscow denies it has failed to uphold U.N. sanctions.

Trump and Putin spoke after U.S. Vice President Mike Pence, in an interview with the Washington Post, raised the prospect of talks with North Korea.

But Pence, who traveled to South Korea for the Winter Olympics, also said Washington would intensify its “maximum pressure campaign” against Pyongyang until it takes a “meaningful step toward denuclearization.”

Russia signed on to the latest rounds of United Nations Security Council sanctions against North Korea imposed last year, including a ban on coal exports, which are an important source of the foreign currency Pyongyang needs to fund its nuclear program.

The North Korean coal was shipped to the Russian ports of Nakhodka and Kholmsk, where it was unloaded at docks and reloaded onto ships that took it to South Korea or Japan, the sources said.