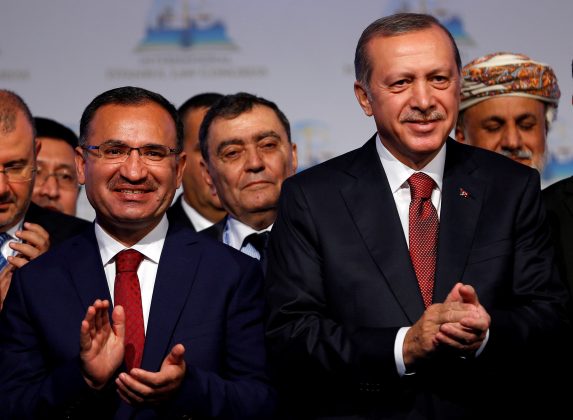 ANKARA (Reuters) – Turkish leaders condemned Germany on Friday for cancelling rallies of Turkish residents due to be addressed by Ankara’s ministers and accused Berlin of giving “shelter” to Turkey’s enemies.

As the diplomatic spat between the two countries became increasingly angry, Turkish President Tayyip Erdogan said a German journalist being held in Turkey was a “German agent” and a member of an armed Kurdish militant group.

A source in Germany’s foreign ministry on Friday night told Reuters those accusations were “absurd”.

Earlier, comments in Berlin by Turkey’s Justice Minister Bekir Bozdag, who had been scheduled to address a meeting in the southwestern town of Gaggenau until it was canceled on Thursday, reflected a broader souring of relations between the two NATO allies.

“Let them look back at their history,” Bozdag said in a speech. “We see the old illnesses flaring up.”

The city of Cologne also blocked an event where Turkey’s Economy Minister Nihat Zeybecki was to speak on Sunday. Police said shortly after that a second gathering he had been due to attend in the western town of Frechen was also canceled.

Zeybecki said he still planned to go to Germany.

“We say the victory is God’s…I will go from cafe to cafe, house to house,” he said. “Nobody should worry, we will still meet with our citizens in Germany.”

Chancellor Angela Merkel, speaking in Tunis, said her government had played no part in steps taken by city councils who, according to one mayor, acted purely on security grounds.

She renewed her criticism of Turkey’s arrest of Deniz Yucel, a correspondent for German newspaper Die Welt.

“We support freedom of expression and we can criticize Turkey,” she told reporters.

The German foreign ministry urged Ankara to refrain from “pouring oil on the fire”.

Erdogan said in Ankara the cause of the tensions between the two countries was Germany’s support for Turkey’s enemies.

“It isn’t because a correspondent of Die Welt was arrested,” Erdogan told an awards ceremony in Istanbul.

“It is because this person hid in the German embassy as a member of the PKK and a German agent for one month. When we told them to hand him over to be tried, they refused.”

“So, they won’t let our justice minister and economy minister speak,” Erdogan added.

“They need to be tried for helping and abetting terrorism.”

Gaggenau would have been part of efforts to garner support among 1.5 million Turkish citizens for an April referendum expanding Erdogan’s powers – something he has sought with increased urgency since an army bid to topple him.

On Friday evening the Dutch government said plans by Turkish authorities to hold a referendum campaign rally in Rotterdam were “undesirable”.

The leader of an association of Dutch Turks said Turkish Foreign Minister Mevlut Cavusoglu was planning to attend the March 11 rally, hoping to persuade the Netherlands’ hundreds of thousands of dual citizens to vote for the new constitution giving Erdogan greater powers.

Authorities in Gaggenau evacuated the city hall for hours on Friday after receiving a bomb threat, its mayor told n-tv German television. Asked if it was linked to the cancellation, mayor Michael Pfeiffer said: “We presume this at the moment, but we don’t know for sure.”

In a phone call between Turkish Foreign Minister Mevlut Cavusoglu and his German counterpart Sigmar Gabriel, the ministers agreed to meet in Germany on March 8 to discuss tensions between the two countries, foreign ministry sources in Ankara said.

Journalist Yucel, a German-Turkish dual national, is charged with propaganda in support of a terrorist organization. The German foreign ministry said it had not yet been granted consular access to Yucel or five other Germans arrested since the July 15 coup attempt.

“It is the role of the state to protect journalists and not burden them with repressive measures.”

Erdogan accuses an exiled cleric of masterminding the coup, describing his organization as the FETO terrorist group. Turkey also complains that Germany and other West European countries give succor to militant leftists and PKK Kurdish militants.

(Additional reporting by Andrea Shalal in Berlin, Andreas Rinke in Tunis and Tuvan Gumrukcu in Ankara; editing by Andrew Roche)