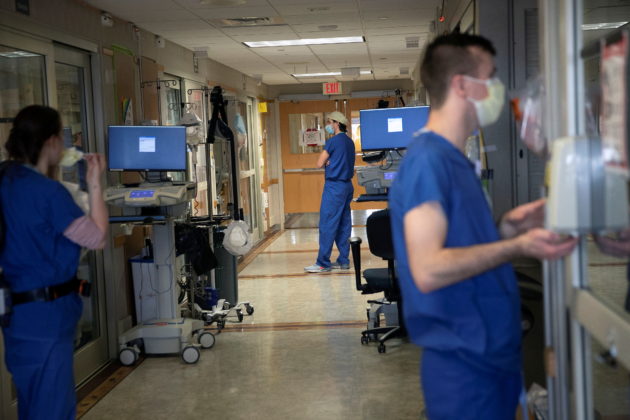 By Brendan O’Brien and Maria Caspani

CHICAGO (Reuters) – U.S. health authorities braced for further increases in COVID-19 infections, hospitalizations and deaths on Friday, capping a week in which the spread of the novel coronavirus accelerated ahead of next week’s Thanksgiving holiday.

The seven-day rolling average of new COVID-19 cases reached more than 165,000 on Thursday, while the seven-day average for deaths climbed to 1,359, more than any day since late May, according to a Reuters tally of public health data.

With hospitalizations rising across much of the nation, straining already exhausted medical staff, officials in more than 20 states have imposed restrictions to curtail the spread of the virus.

The White House Coronavirus Task Force coordinator, Dr. Deborah Birx, said the virus is spreading at a high rate across more than half the country and that Thanksgiving gatherings should be limited to immediate family members rather than a maximum number of people.

“I don’t like it to be any number… if you say it can be 10, and it’s eight people from four different families, then that probably is not the same degree of safe as 10 people from your immediate household,” Birx told CNN on Friday.

In a positive sign for combating the pandemic, Pfizer Inc. said it will apply to U.S. health regulators on Friday for emergency use authorization of its COVID-19 vaccine, the first such application in a major step toward providing protection against the virus.

Pfizer and German partner BioNTech SE this week reported final trial results that showed the vaccine was 95% effective in preventing COVID-19 with no major safety concerns.

If the data is solid, “we literally could be weeks away from the authorization of a 95% effective vaccine,” U.S. Health Secretary Alex Azar said on CBS’ “This Morning.”

California’s governor on Thursday imposed some of the most stringent restrictions on the vast majority of the state’s population, with a curfew on social gatherings and other non-essential activities that will start on Saturday night and end on the morning of Dec. 21.

“The virus is spreading at a pace we haven’t seen since the start of this pandemic, and the next several days and weeks will be critical to stop the surge,” Governor Gavin Newsom, a Democrat, said in a statement announcing the measure a week before the Thanksgiving holiday.

Similar restrictions took effect in Ohio this week, while Minnesota ordered a shutdown of restaurants, bars, fitness centers and entertainment venues from Friday until Dec. 18 at the earliest, as the state’s hospital intensive care units were stretched to capacity.

In Illinois, where the number of COVID-19 tests coming back positive was at an alarmingly high 20% and new restrictions, including a ban on indoor dining, took effect on Friday, long lines appeared again at testing sites.

In Chicago’s metro area, Emily Randall had no luck finding an opening to get tested after she woke up with a throbbing headache on Thursday.

“It’s very frustrating because I’m trying to be a responsible citizen,” said the 43-year-old research analyst. “My head feels a lot better but I am still worried because I have read stories of people who got better and then, all of a sudden, got worse.”

The number of patients hospitalized with COVID-19 in the United States has jumped nearly 50% in the past two weeks, with more than 80,000 people being treated for the disease in hospitals across the country as of late Thursday, a Reuters tally showed, the most at any time during the pandemic.

Daily COVID-19 deaths surpassed the 2,000 mark for the first time since late June on Thursday.

U.S. officials have pleaded with the public to avoid unnecessary travel and exercise caution as the winter holidays of Thanksgiving and Christmas approach.

The U.S. Centers for Disease Control and Prevention issued a “strong recommendation” on Thursday that Americans refrain from traveling for the holiday.

“In South Dakota, we won’t stop or discourage you from thanking God and spending time together this Thanksgiving,” Noem said in a statement on Friday.

With cases and deaths increasing steadily in most states, the University of Washington’s Institute for Health Metrics and Evaluation updated its widely cited model.

“With few tools available right now to curb spread other than increasingly urgent public appeals, our COVID numbers are growing rapidly and predict, quite accurately so far, a health care crisis in Wisconsin that without significant, swift, and unified action will become a catastrophe,” Wisconsin Hospital Association President and CEO Eric Borgerding wrote in a letter to legislators and the governor on Thursday.