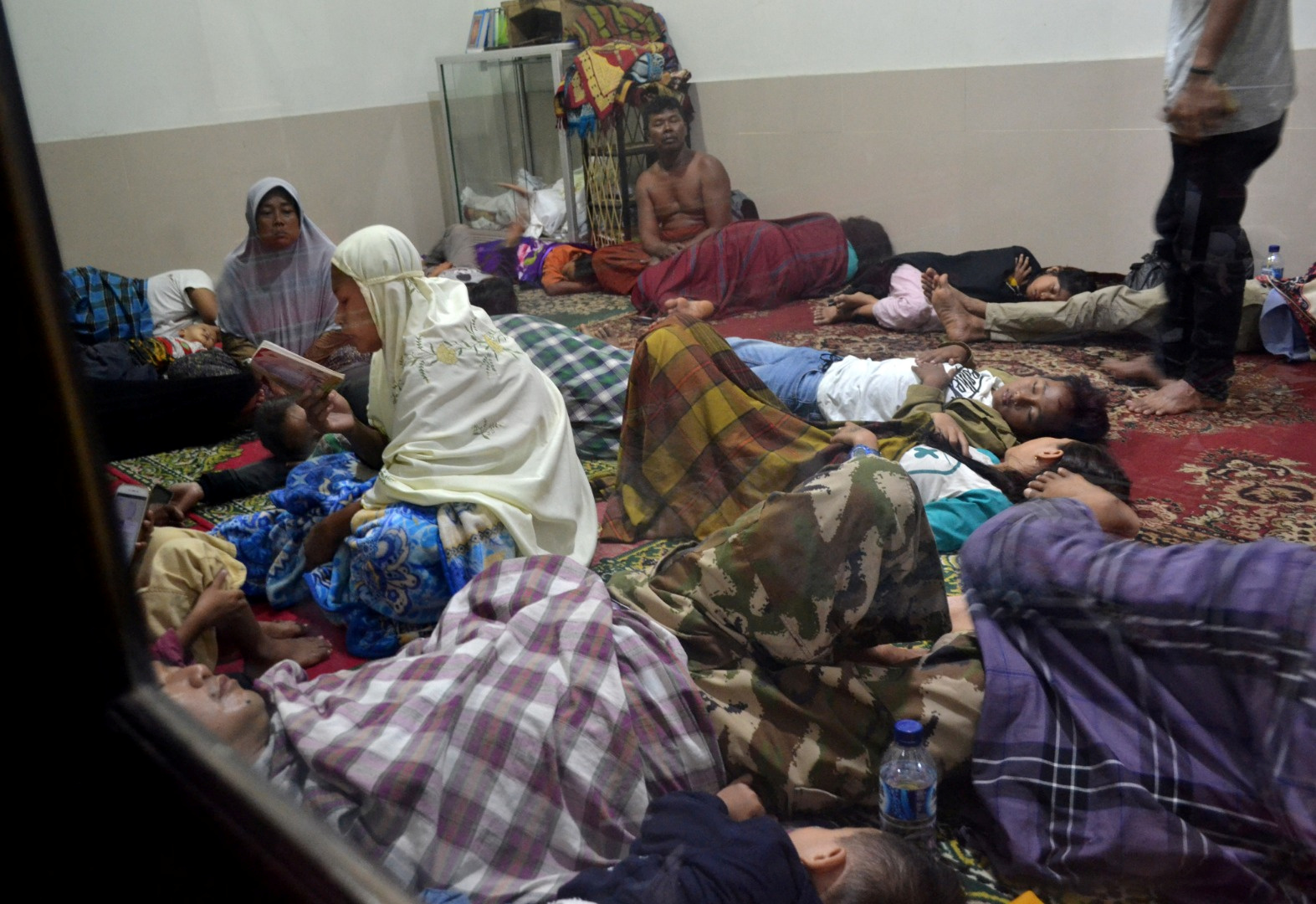 JAKARTA (Reuters) – A tsunami killed at least 43 people on the Indonesian islands of Java and Sumatra and injured hundreds following an underwater landslide caused by a volcanic eruption, the disaster mitigation agency said on Sunday.

Some 584 people were injured and hundreds of homes and other buildings were “heavily damaged” in the tsunami which struck late on Saturday.

Endan Permana, head of the agency in Pandeglang, told Metro TV police were providing immediate assistance to victims in Tanjung Lesung in Banten province, a popular tourist getaway not far from the capital, Jakarta, as emergency workers had not arrived in the area yet.

“Many are missing,” Permana said.

The agency said it was still compiling information and there was a “possibility that data on the victims and damage will increase”.

The tsunami was caused by “an undersea landslide resulting from volcanic activity on Anak Krakatau” and was exacerbated by abnormally high tide because of the current full moon, disaster agency spokesman Sutopo Purwo Nugroho said.

According to a statement from the Meteorology, Climatology and Geophysics Agency (BMKG), Krakatau erupted at just after 9 p.m. and the tsunami struck at around 9.30 p.m. on Saturday.

“The tsunami hit several areas of the Sunda Strait, including beaches in Pandeglang regency, Serang, and South Lampung,” the agency said.

Nugroho told Metro TV that tsunamis triggered by volcanic eruptions were “rare” and that the Sunda Strait tsunami had not resulted from an earthquake.

“There was no earthquake, and the Anak Krakatau eruption also wasn’t that big,” Nugroho told Metro TV, noting there were no “significant” seismic tremors to indicate a tsunami was coming.

The Krakatau eruption created a column of volcanic ash estimated to be up 500 meters high. 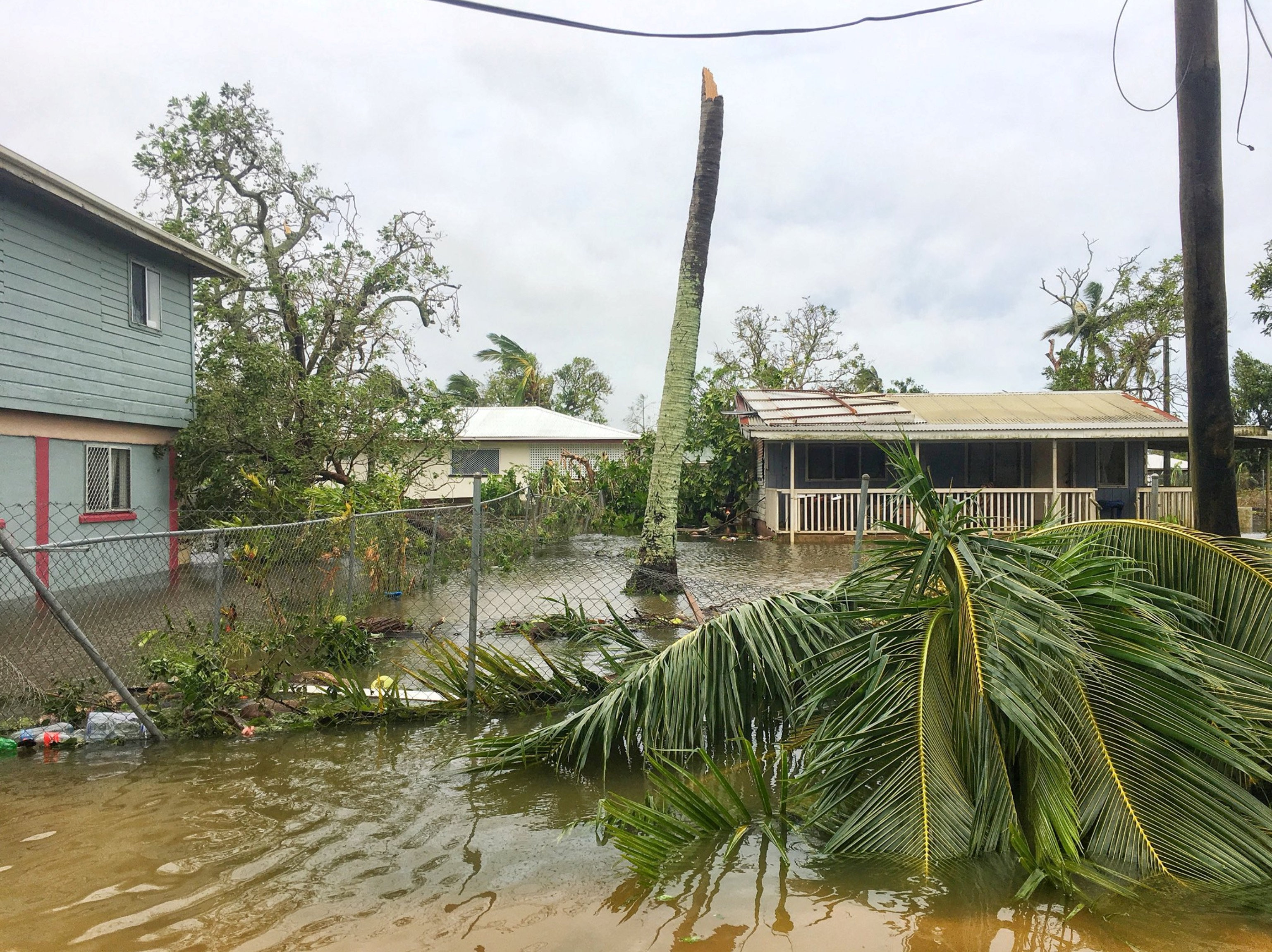 WELLINGTON (Reuters) – Tonga’s neighbors scrambled to deliver emergency relief on Tuesday after Cyclone Gita tore across the Pacific island nation in the middle of the night, flattening the parliament, tearing roofs off homes and causing widespread flooding.

There were no confirmed reports of deaths from the Category 4 storm that bought winds of around 200 km (125 miles) per hour, but there were a lot of injured people, some seriously, said Graham Kenna, an Australian government adviser at Tonga’s National Emergency Management Office.

Photos posted on social media showed a wrecked Parliament House building in the capital, as well as extensive flooding and downed power lines. Access to areas outside the capital were hindered by the storm damage and debris.

“The full extent of damage caused by Cyclone Gita is still being assessed but there is an immediate need for assistance on the ground,” NZ Foreign Affairs Minister Winston Peters said in a statement.

“About 5,700 people sought shelter in evacuation centres overnight, and it is expected these numbers will increase substantially tonight.”

New Zealand is donating NZ$750,000 ($545,000) in aid, and a NZ Air Force Hercules aircraft was due to fly emergency relief supplies into Tonga on Tuesday.

Australia is donating A$350,000 ($275,000) worth of emergency shelter, kitchen and hygiene kits, while the country’s foreign minister said the Australian Defence Force personnel would assist with clean-up efforts.

The cyclone was heading towards Fiji’s southern islands on Tuesday, with some forecasts reporting it intensifying towards a Category 5 storm. Fijian Prime Minister Frank Bainimarama warned residents to “heed warnings and prepare”, although the storm is expected to bypass heavily populated areas.

Gita had pummeled Samoa and American Samoa, about 900 km (560 miles) to the northeast, over the weekend, flooding the Samoan capital, Apia. 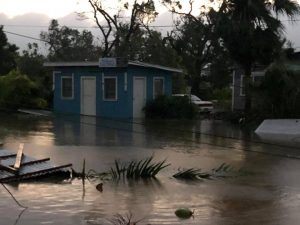 The aftermath of cyclone Gita is seen in Nuku’alofa, Tonga, February 13, 2018 in this picture obtained from social media. Facebook Noazky Langi/via REUTERS THIS IMAGE HAS BEEN SUPPLIED BY A THIRD PARTY. MANDATORY CREDIT. NO RESALES. NO ARCHIVES

Tonga’s clean-up began in the early hours of Tuesday as the tail of the cyclone was still over the capital, Nuku’alofa.

“Every second power pole has been knocked over and the lines are just everywhere,” Kenna said, saying it would likely be days before power could be restored. Water supplies and radio networks were also disrupted.

“They turned the power off very early before the cyclone came, knowing that the power lines would be blown down, which was a good move.”

The worst of the cyclone hit around a low tide, so there were no reports of storm surges worsening the impact of the wind and rains.

Kenna estimated around 40 percent of houses in the capital had suffered some damage, many with roofs blown off.

“A lot of the older houses, especially some of the older heritage houses, have been badly damaged or destroyed, which is very sad, they’re quite historical,” he said. “They’ve been through cyclones before, but this is the biggest cyclone this island has had for at least 60 odd years.”

(Reporting by John Mair in Wellington.; Additional reporting by Colin Packham in Sydney; Editing by Jane Wardell and SImon Cameron-Moore) 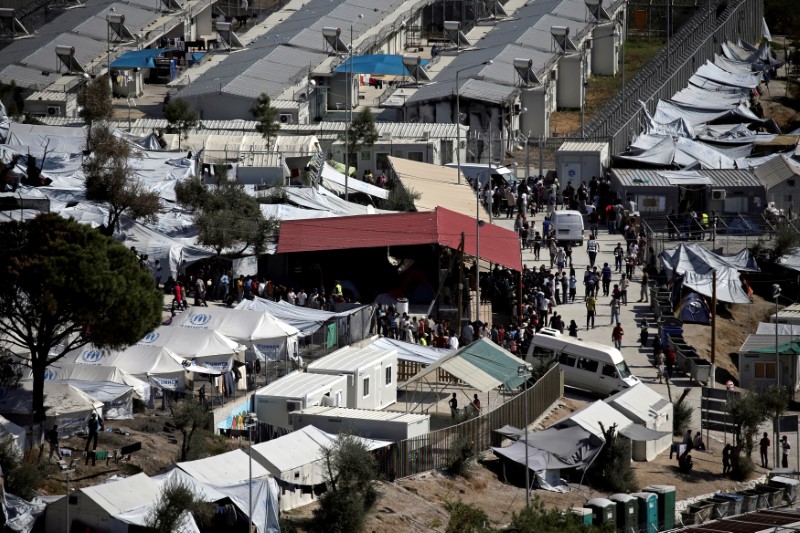 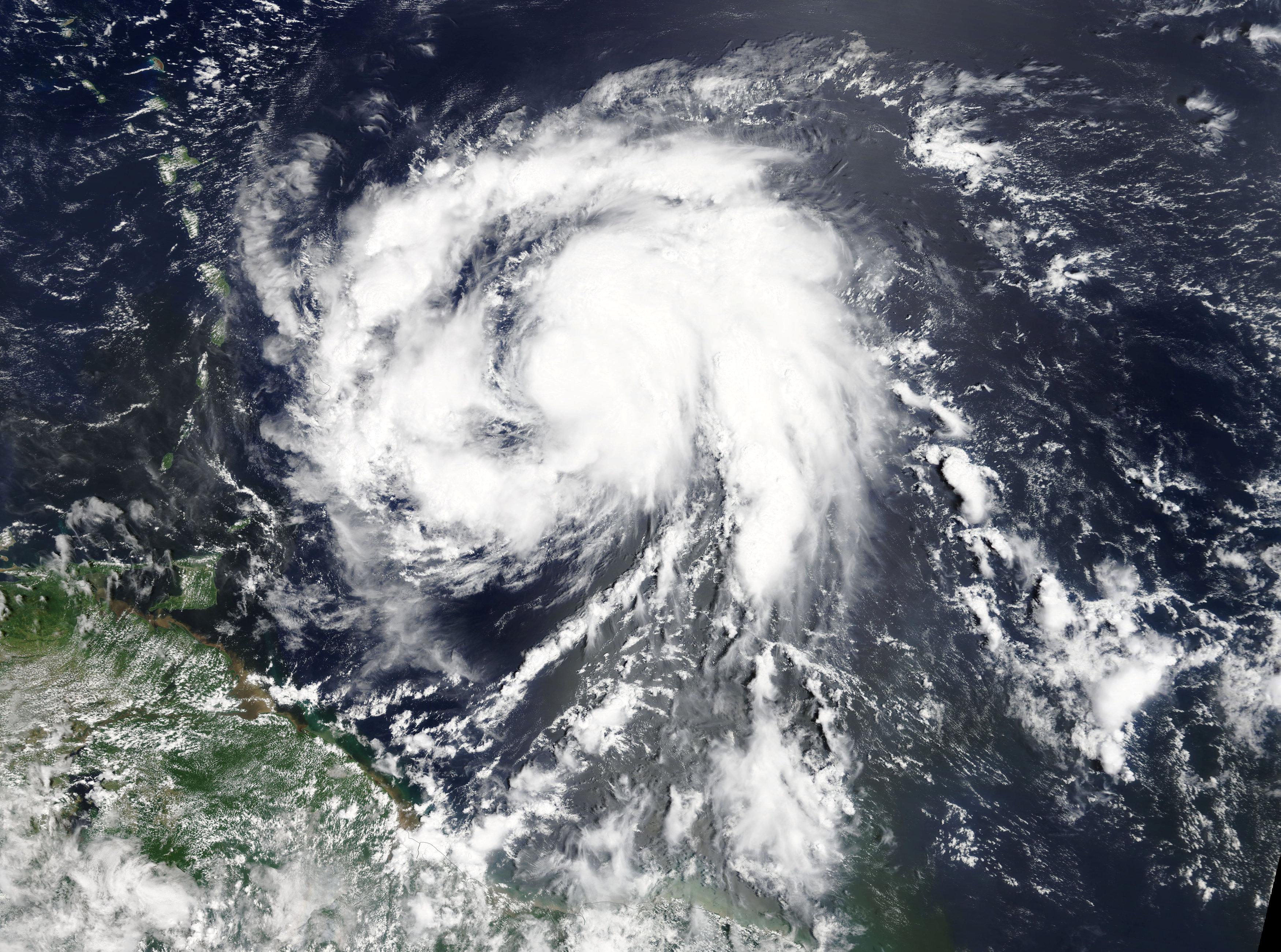 BRIDGETOWN, Barbados (Reuters) – Hurricane Maria picked up strength and roared toward the Leeward Islands on Monday on a track that could whip several eastern Caribbean islands with their second major storm this month.

Maria grew into a Category 3 storm on the five-step Saffir-Simpson scale, with maximum sustained winds of 120 miles per hour (195 km per hour). It was located about 60 miles (95 km) east of Martinique, the U.S. National Hurricane Center said at 11 a.m. ET (1500 GMT).

It was headed west-northwest at about 10 mph (17 kph) on a track that would put it over the U.S. territory of Puerto Rico by Wednesday.

Maria was expected to be the second major hurricane this year to hit the Leeward Islands, which were hammered by Hurricane Irma earlier this month, the center said.

Streets were flooded in some residential parts of the island of Barbados, which had been experiencing heavy rain since Sunday as the storm approached.

Maria was expected to bring storm surges – seawater driven ashore by wind – of up to 6 feet to 9 feet (1.8-2.7 m), the NHC said. Parts of the central and southern Leeward Islands could see as much as 20 inches (51 cm) of rain, it said.

Hurricane and tropical storm warnings and watches were in effect for a string of islands in the area, including the U.S. and British Virgin Islands, Antigua and Barbuda and the French-Dutch island of Saint Martin.

Several of those islands were devastated earlier this month when Hurricane Irma rampaged through the Caribbean as one of the most powerful Atlantic hurricanes ever recorded, killing more than 80 people on the islands and the U.S. mainland. 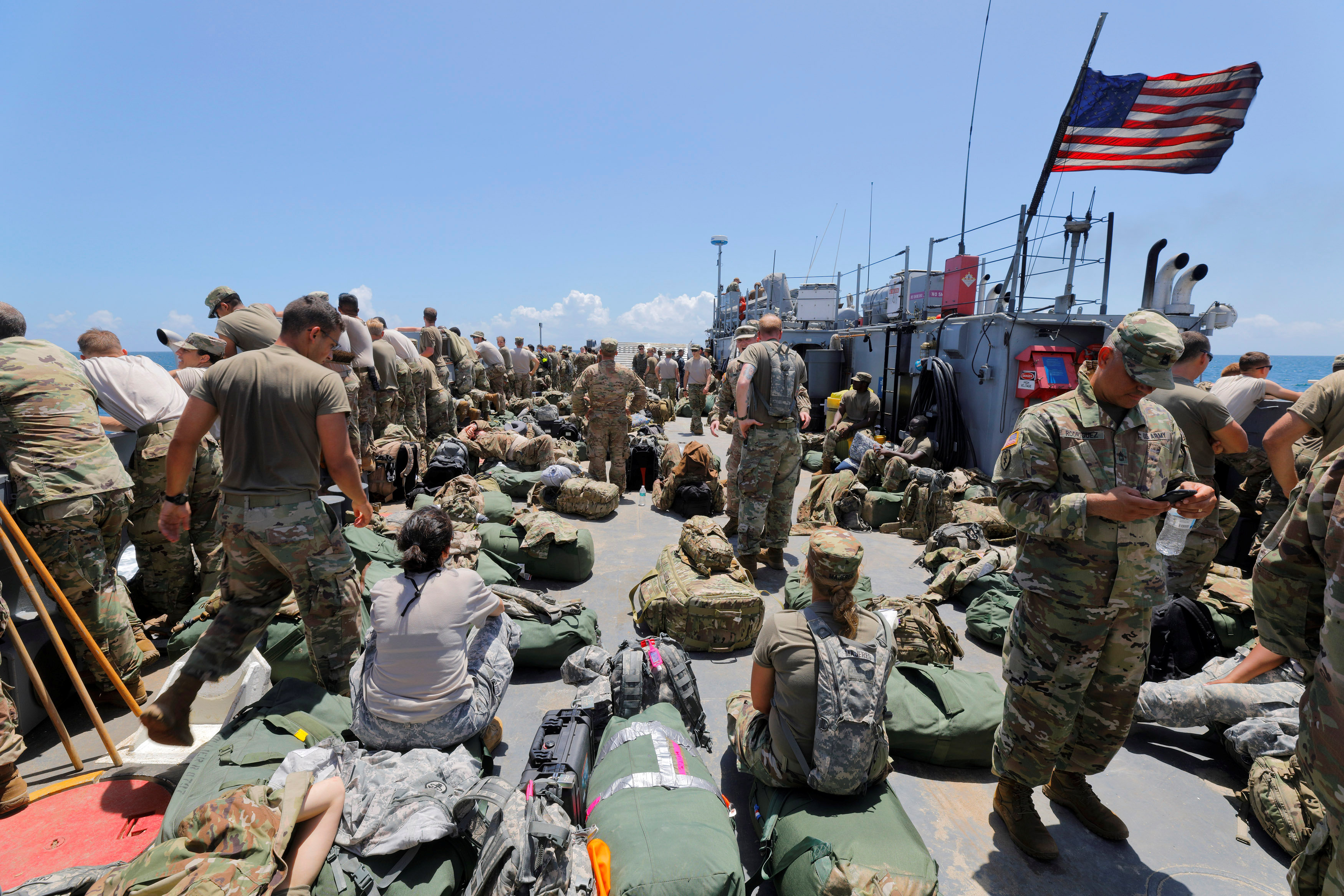 The deck of a U.S. Navy landing craft is crowded with Army soldiers and their belongings as they are evacuated in advance of Hurricane Maria, off St. Thomas shore, U.S. Virgin Islands September 17, 2017. REUTERS/Jonathan Drake

Puerto Rico, a U.S. territory which Irma grazed as it headed toward Cuba and Florida, opened shelters and began to dismantle construction cranes that could be vulnerable to high winds as it prepared for Maria.

“It is time to seek refuge with a family member, friend, or move to a state shelter because rescuers will not go out and risk their lives once winds reach 50 miles per hour,” Puerto Rico Governor Ricardo Rosselló told reporters on Monday.

Some 450 shelters were open, including one in San Juan that is already housing people evacuated by nearby islands hit by Irma, the government said.

More than 1,700 residents of Barbuda were evacuated to neighboring Antigua after Irma damaged nearly every building there.

The eye of that storm was forecast to remain off the east coast of the United States for the next few days, bringing dangerous surf and rip currents to beaches from Delaware through Massachusetts.