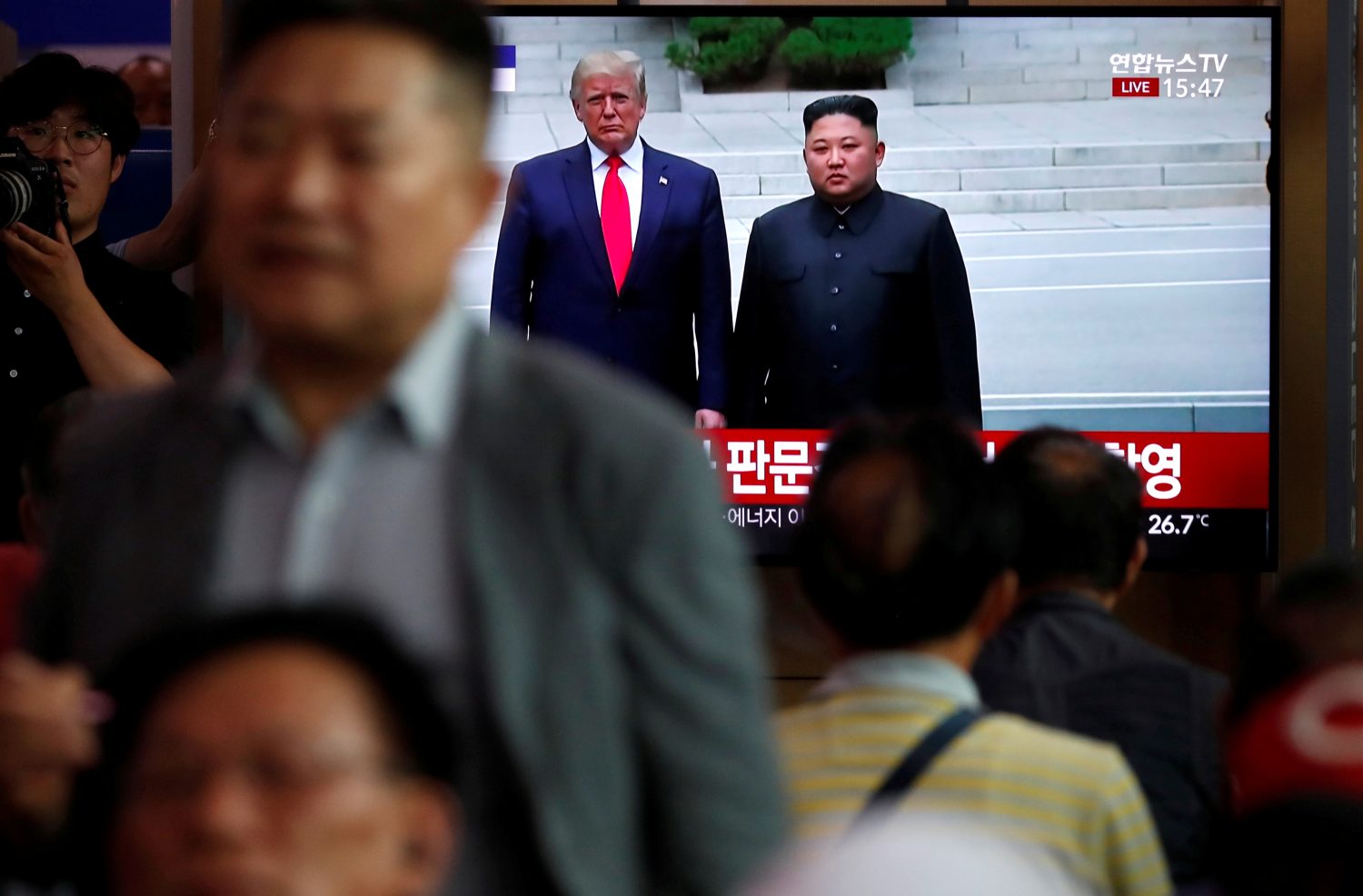 South Korea, which supports efforts by North Korea and the United States to end years of hostility, urged the North to stop acts that are unhelpful to easing tension, saying the tests posed a military threat on the Korean peninsula.

The South’s National Security Council said it believed the missiles were a new type of ballistic missile but it would make a final assessment with the United States.

Firing a ballistic missile would be a violation of U.N. Security Council resolutions that ban the North from the use of such technology. North Korea has rejected the restriction as an infringement of its sovereign right to self-defense.

North Korea launched the missiles from the east coast city of Wonsan with one flying about 430 km (267 miles) and the other 690 km (428 miles) over the sea. They both reached an altitude of 50 km (30 miles), an official at South Korea’s Defense Ministry said.

Some analysts said the North appeared to have retested missiles it fired in May, but two South Korean military officials said the missiles appeared to be a new design.

The launch casts new doubt on efforts to restart stalled denuclearisation talks after Trump and Kim met at the demilitarized zone (DMZ) between the two Koreas at the end of June.

U.S. Secretary of State Mike Pompeo and North Korean Foreign Minister Ri Yong Ho had been expected to meet on the sidelines of a Southeast Asian security forum in Bangkok next week.

But a diplomatic source told Reuters on Thursday that Ri had canceled his trip to the conference.

The White House, Pentagon and U.S. State Department did not immediately respond to requests for comment.

Japanese Prime Minister Shinzo Abe said the test had no immediate impact on Japan’s security, according to Kyodo News.

U.S. national security adviser John Bolton, who has taken a hard line toward North Korea, made no mention of the launches in a tweet on Thursday after a visit to South Korea. He said he had “productive meetings” on regional security.

Chinese foreign ministry spokeswoman Hua Chunying told a briefing that Beijing had noted the launch, and called for North Korea and the United States to reopen negotiations “as early as possible”.

After Trump and Kim met last month, the United States and North Korea vowed to hold a new round of working-level talks soon, but Pyongyang has since sharply criticized upcoming joint military drills by U.S. and South Korean troops.

North Korea’s foreign ministry accused Washington this month of breaking a promise by holding military exercises with South Korea. On Tuesday, Kim inspected a large, newly built submarine from which ballistic missiles could be launched.

“By firing missiles, taking issue with military drills and showing a new submarine, the North is sending one clear message: there might be no working-level talks if the United States doesn’t present a more flexible stance,” said Kim Hong-kyun, a former South Korean nuclear envoy.

Kim Dong-yup, a former navy officer who teaches at Kyungnam University in Seoul, said the weapons tested on Thursday appeared to be the same as the ones tested in May, which were less of a challenge than long-range missiles but “enough to subtly pressure” Washington.

But the South Korean military believes they may be new because they traveled further. In North Korea’s previous missile test in May, the projectiles flew only 420 km (260 miles) and 270 km (168 miles) though they reached the same altitude of about 50 km (30 miles).

“We’re very cautious because it’s difficult to extend the range within such a short time,” said one military official, who asked not to be identified due to the sensitivity of the issue.

Two U.S. officials, speaking on condition of anonymity, said that, according to a preliminary analysis, the missiles were similar to those tested in May but showed enhanced capabilities. They cautioned that it would take time before they were certain whether this was a new missile or not.

One of the officials added that North Korea had generally been shortening the time it took for them to prepare missiles to be launched, potentially decreasing the warning time the United States and allies have to detect the launches.

Nuclear talks between North Korea and the United States stalled after a second summit between Trump and Kim in Vietnam in February broke down.

Trump has repeatedly lauded the North’s freeze in weapons testing as he is keen for a big foreign policy win as he campaigns for re-election in 2020. 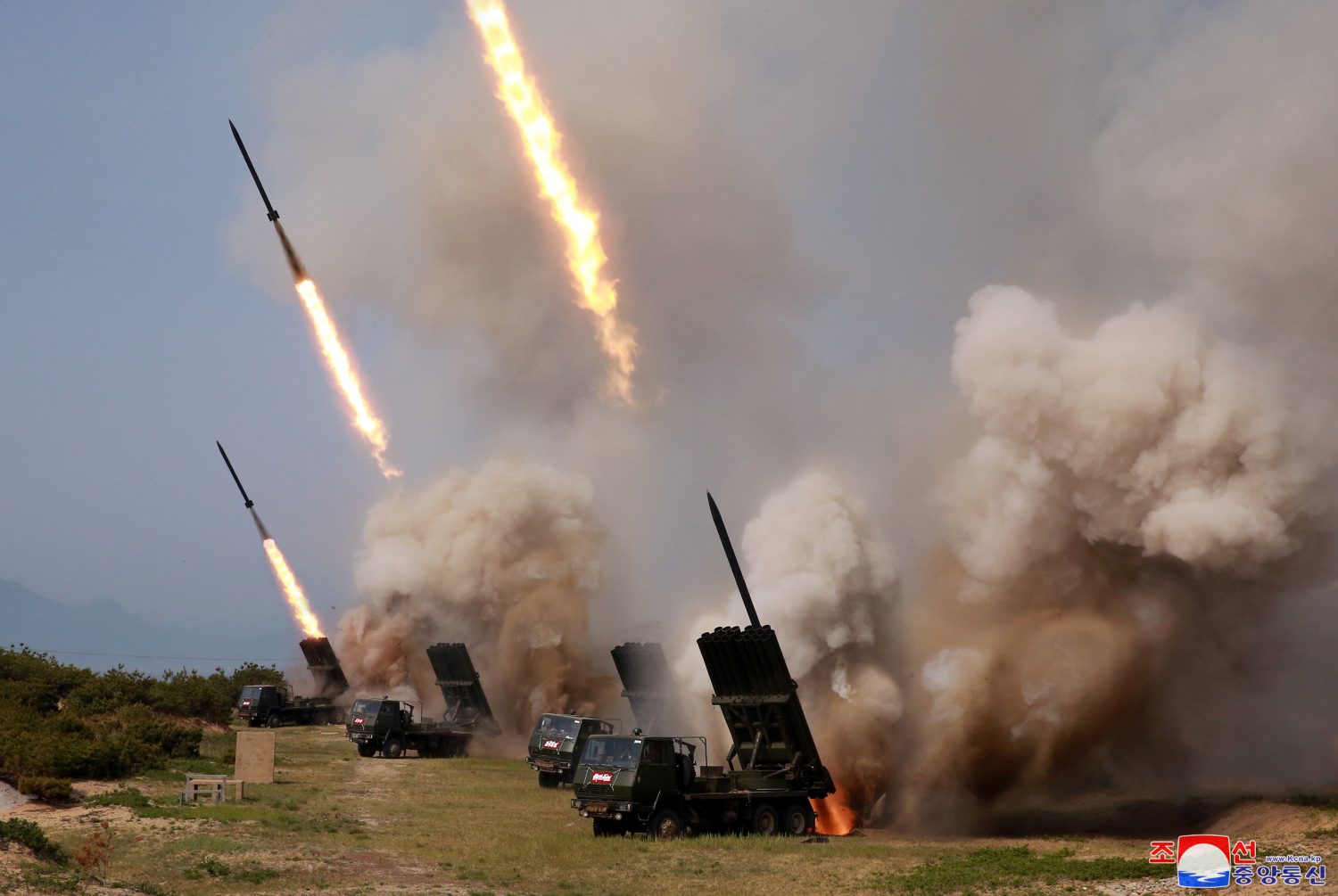 SEOUL (Reuters) – North Korea’s “strike drill” last week at which leader Kim Jong Un oversaw the launch of rockets and at least one short-range ballistic missile was “regular and self-defensive,” the North’s foreign ministry said on Wednesday, according to state media.

“The recent drill conducted by our army is nothing more than part of the regular military training, and it has neither targeted anyone nor led to an aggravation of the situation in the region,” an unidentified ministry spokesperson said in a statement to the state-run KCNA news agency.

It came in the wake of talks with the United States and South Korea stalling in February, and raised alarms in both countries, which have been seeking to entice the North into abandoning its nuclear weapons and ballistic missile programs.

Seoul responded on Saturday by calling on its northern neighbor to “stop acts that escalate military tension on the Korean Peninsula.”

In a second statement carried by KCNA on Wednesday, a spokesman for the North Korean office in charge of military engagement with South Korea lashed out at Seoul over any suggestion that the rocket drills had violated an inter-Korean agreement aimed at reducing military tension.

“The South Korean military should take a close look at the inter Korean military agreement and recall what it has done itself before talking nonsense that it was against the spirit of the agreement,” the spokesperson said, according to KCNA.

The second statement also criticized last week’s test of a U.S. Minuteman intercontinental ballistic missile (ICBM) by the U.S. Air Force out of California over the Pacific, saying South Korea was in no position to criticize North Korea.

“The South Korean military has no right to say a word to its fellow countrymen when it acted like a mute who ate honey when the United States fired a Minuteman ICBM which threatens us,” the military spokesman said.

U.S. President Donald Trump, who has met with Kim twice, said he was still confident he could have a deal with Kim, and South Korean officials have subsequently played down the test.

North Korea’s foreign ministry statement hit back at “spiteful remarks” about the tests from unnamed critics, warning that “baseless allegations” might “produce a result of driving us to the direction which neither we nor they want to see at all.”

The ministry spokesperson said there was a double standard, with South Korea and the United States carrying out military drills with little criticism.

“Only our regular and self-defensive military drill is branded as provocative, and this is an undisguised manifestation of the attempt to press the gradual disarmament of our state and finally invade us,” the spokesperson said. “We think this is very much unpleasant and regrettable, and we sound a note of warning.”

After meeting with Kim for the first time in June last year, Trump abruptly announced he was cancelling all large-scale military exercises with South Korea.

Smaller exercises have continued, however, drawing regular criticism from Pyongyang.

North Korea had maintained a freeze in nuclear and ballistic missiles testing in place since 2017, a fact Trump has repeatedly pointed out as an important achievement from his engagement with Pyongyang.

Denuclearization talks with North Korea have stalled, however, after Trump and Kim met in February for a second summit but failed to reach an agreement.

North Korea balked at the extent of the demands made by American negotiators, and Trump said he ended the summit early because Kim was asking for nearly all major sanctions to be lifted while offering little in return.

The U.S. special envoy for North Korea, Stephen Biegun, arrived in Seoul on Wednesday for talks with South Korean officials.

He did not respond to questions from journalists, but his agenda is expected to include the missile test, as well as other aspects of talks with North Korea, including plans for possible humanitarian aid. 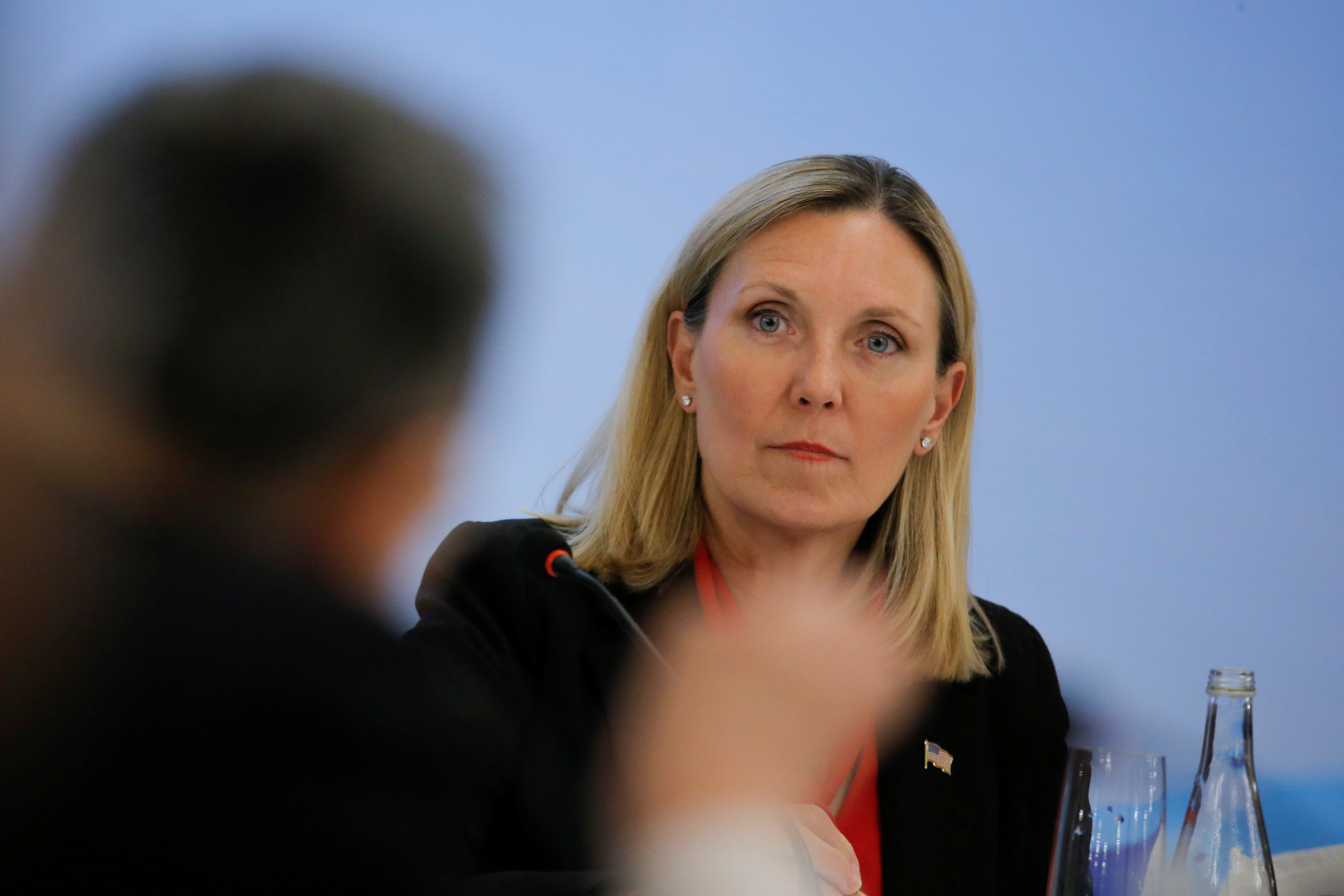 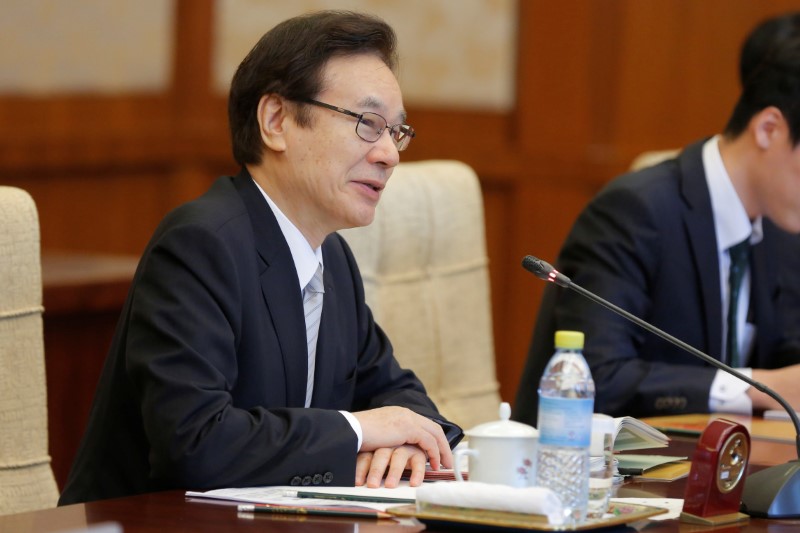 SEOUL (Reuters) – The top national security advisers of the United States, South Korea and Japan met at the weekend to discuss North Korea and the “complete denuclearization of the Korean peninsula”, South Korea’s presidential Blue House said on Monday.

They also discussed the possible meeting between Trump and Kim, it said.

The security advisers from the three countries discussed the “complete denuclearization of the Korean peninsula”, agreed that “it was important to not repeat the mistakes of the past” and to work together closely, the Blue House said.

That followed three days of talks between North Korean and Swedish foreign ministers on security on the Korean peninsula.

Sweden “engaged heavily” on the issue of U.S. detainees during the talks between North Korean and Swedish foreign ministers, CNN reported on Sunday, citing unidentified sources with knowledge of the negotiations.

North Korea is pursuing its nuclear and missile programs in defiance of U.N. Security Council sanctions and has made no secret of its plans to develop a missile capable of hitting the U.S. mainland.