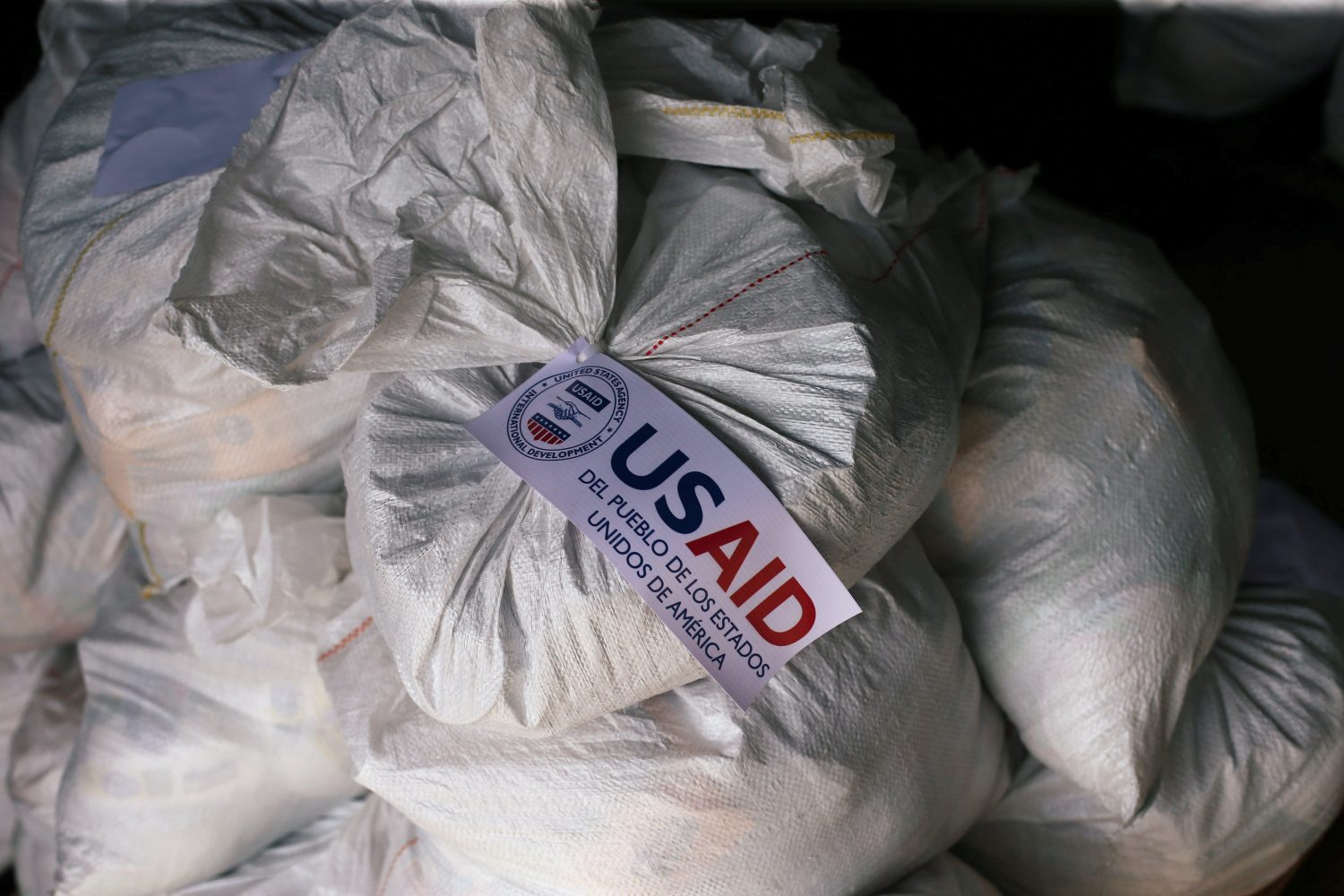 MUNICH (Reuters) – U.S. military aircraft are expected to deliver more than 200 tons of humanitarian aid to the Venezuelan border in Colombia, with the shipment likely to take place on Saturday, a U.S. official said on Friday.

The official, who spoke on condition of anonymity, said the U.S. State Department planned to make an announcement about the shipment on Friday but provided no further details. The State Department did not immediately respond to a request for comment.

The U.S. special envoy on Venezuela last week said the aid effort was being coordinated with the opposition team but said the aid would not be forced into Venezuela.

Venezuelan President Nicolas Maduro has overseen an economic collapse in the oil-rich South American country that has left millions struggling to buy food and medicines and has fueled an unprecedented migration crisis in the region.

An aid convoy supplied by the United States and Colombia arrived in the Colombian border town of Cucuta last week, where it is being held in warehouses. Maduro has refused to let supplies in.

Self-declared president Juan Guaido, the opposition leader, told a huge rally of supporters on Tuesday that humanitarian aid would enter the country on Feb. 23.

Guaido invoked constitutional provisions to declare himself interim president last month, arguing that Maduro’s 2018 re-election was a sham. Most Western countries, including the United States and many of Venezuela’s neighbors, have recognized Guaido as the legitimate head of state.

Maduro retains the backing of Russia and China and control of Venezuelan state institutions including the military.

Seeking to strengthen support for Guaido, the United States has said it will try to channel aid to Venezuela via Colombia and possibly Brazil.

Maduro has called the aid a U.S.-orchestrated show and denies any crisis. However, opposition member Gustavo Tarre has said the sole aim is to ease “the suffering of Venezuelans” and has denied any political, economic or military motive. [nL1N2090UC] 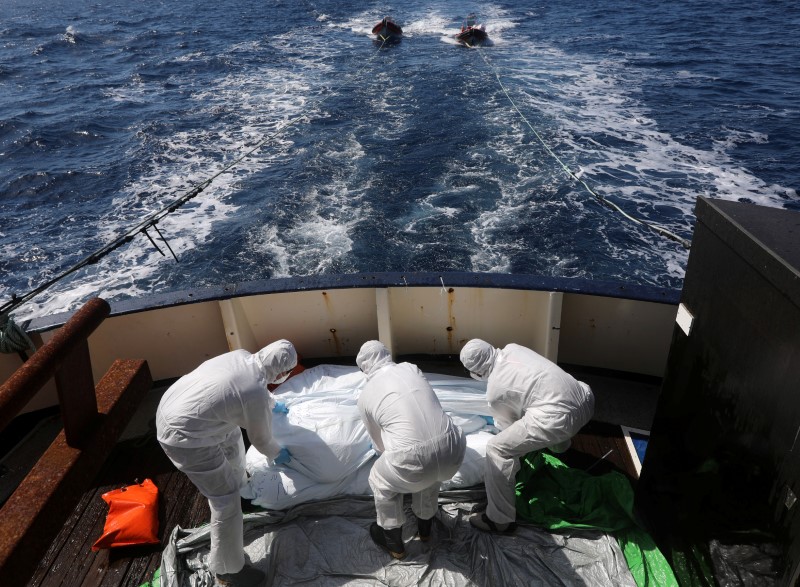 Television footage showed bodies washed up on a beach near the town. Rescuers managed to save seven people from the stricken vessel and the coast guard was searching for any other survivors, Dogan said.

A deal between Turkey and the European Union on curbing illegal migration, struck a year ago, helped reduce the migrant influx to Europe via Greek islands to a trickle. But some are still trying to make the perilous voyage across the Aegean.

Just 3,629 refugees and migrants have crossed to Greece from Turkey so far this year, according to the United Nations refugee agency UNHCR, and about 60 arrive on Greek islands each day. At least 173,000 people, mostly Syrians, arrived in 2016.

Europe’s deteriorating relations with Turkey could endanger the deal, under which Ankara helps control migration in return for the promise of accelerated EU membership talks and aid.

President Tayyip Erdogan said on Thursday that Turkey would review all political and administrative ties with the EU after an April referendum, including the migrant deal.

Erdogan has been angered by Germany and the Netherlands cancelling planned rallies on their territory by Turkish officials seeking to drum up support for a “yes” vote in the referendum, which could lead to constitutional changes extending the powers of the presidency.

(Reporting by Tuvan Gumrukcu in Ankara and Karolina Tagaris in Athens; Writing by Nick Tattersall)

As tensions continue to swell in Europe over the mass influx of migrants from the Middle East, the photos of a young boy who drowned while attempting to make the journey is causing outrage across the continent.

At least 12 Syrians died when the boat they were using to reach Greece sank in the Mediterranean Sea.  The bodies of the victims washed up on the beach including that of a young boy which a Turkish news agency then published and pushed into social media with the hashtag #KiyiyaVuranInsnlik, which means “humanity washed ashore.”

Five of the 12 dead are children.

“When mothers are desperately trying to stop their babies from drowning when their boat has capsized […] Britain needs to act,” British Labour Party member Yvette Cooper told the BBC.

Meanwhile, migrants are still protesting outside the train station in Budapest, Hungary where officials are continuing to deny them access to trains to other parts of the EU.

Greece has reported an increase in migrants of 50% in just the last week and have already absorbed more migrants this year than all of last year.

The European Union has an emergency meeting scheduled for September 14th to address the crisis.

Migrants flooding into Hungary have begun rioting over the government’s decision to close a train station in Budapest, keeping them from streaming into Germany.

Police erected a blockage at the city’s main train terminal as about 1,000 migrants chanted “Germany! Germany!”  Later the protesters sat down in front of the barricaded entrance.

Government spokesman Zoltan Kovacs told the BBC that the country was enforcing the EU’s immigration laws.

The EU has a rule called the “Dublin Regulation” which requires all refugees to register for asylum in the first EU nation they enter.  Because Italy and Greece are overwhelmed with hundreds of thousands of migrants, many skip those checkpoints and travel to other EU nations.

“Dublin rules are still valid and we expect European member states to stick to them,” a German interior ministry spokesman said.

EU leaders have already approved measures to help Greece and Italy with registration of migrants and are looking at ways to streamline the process of immigrants coming to other EU countries.

Meanwhile, tens of thousands of Icelandic residents have called on their government to welcome refugees into their country as way to escape the violence of the Middle East.

Hungarian officials are rushing military troops to their border to try and stop a massive wave of migrants attempting to escape the violence of the Middle East and Asia.

Hungarian officials said that a record 2,533 migrants were arrested attempting to enter the country on Tuesday.  Most of them were from Syria, Pakistan or Afghanistan.

Officials are calling the situation the worst migrant crisis since the second World War and Hungary is attempting to quickly build a 110 mile border fence with razor wire to stop the illegal immigration.

“Hungary’s government and national security cabinet … has discussed the question of how the army could be used to help protect Hungary’s border and the EU’s border,” government spokesman Zoltan Kovacs told reporters.

The move by Hungary is coming under criticism from Germany and France.  The German and French governments are working to put together a comprehensive plan for all nations across Europe to accept migrants, but Hungary’s actions are countering the proposed actions.

Other nations are also overwhelmed.  Greece, which is in the midst of financial crisis unlike any other in the nation’s history, has been burdened with 50,000 migrants in just the month of July.

As a wave of Syrian refugees attempting to escape the violence of the Middle East drew closer to the Hungarian border, Germany announced they would be welcoming in anyone escaping the civil war.

The announcement comes as some smaller nations have declared states of emergency because of the mass wave of people fleeing ISIS and the Syrian war.  Macedonia first tried to use their military to keep out the migrants and when they were overrunning chartered trains to take the migrants directly to Germany or France.

German and French officials are working together to create a joint plan for all of Europe to deal with migrants from war torn areas.  The outline will provide expedited asylum for those refugees as well as returning to home countries those who are not arriving from an area of conflict.

Germany announced they expect to absorb 800,000 migrants this year, after only receiving 44,417 in the first six months of the year.

Officials are dealing with a wave of anti-immigrant violence.  A shelter for migrants in the German town of Heidenau was attacked three consecutive nights despite police guarding the facility.