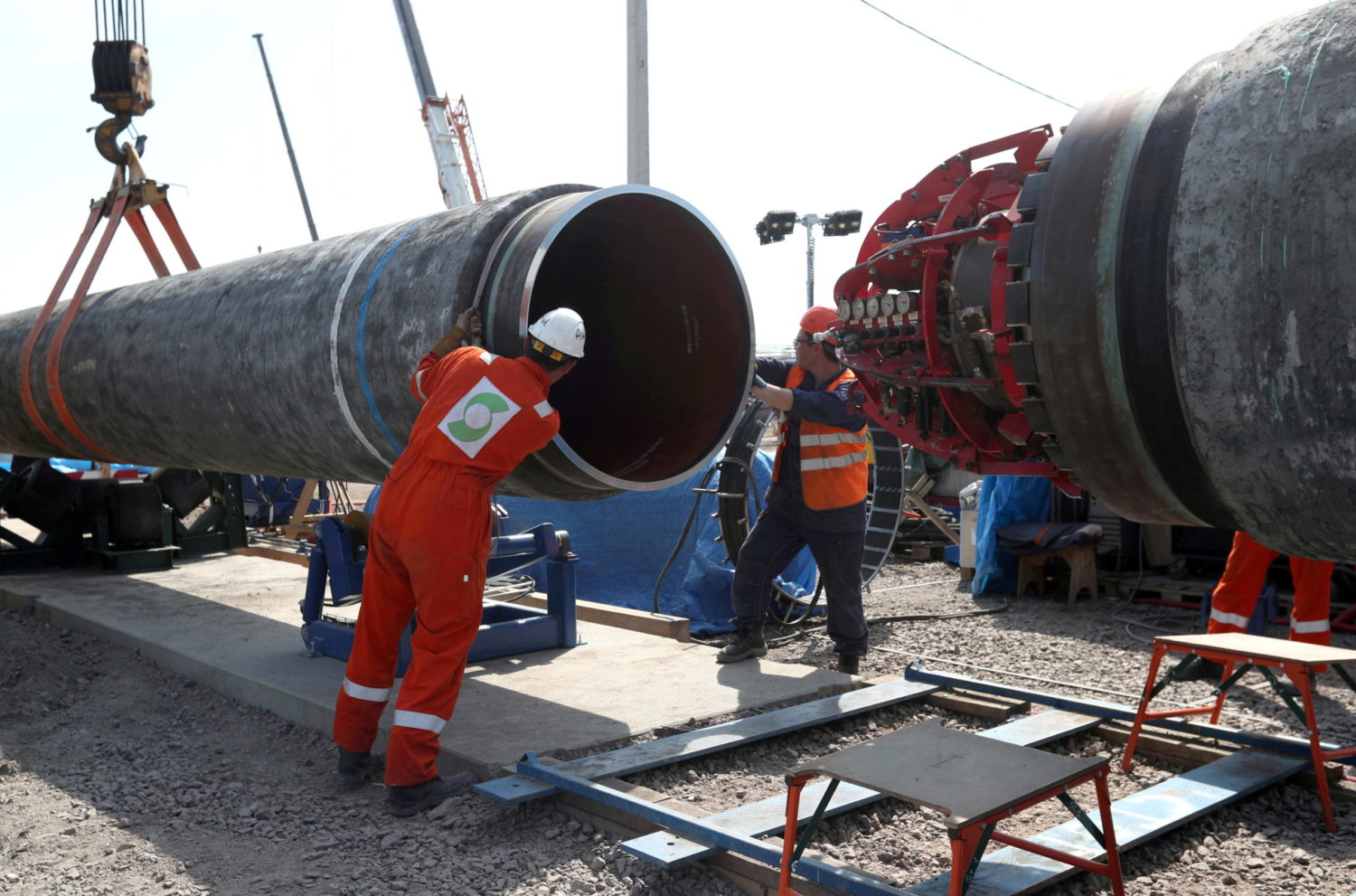 By Andrea Shalal and Andreas Rinke

WASHINGTON (Reuters) – The United States and Germany will unveil a deal on Wednesday that maps out consequences for Russia if it uses the Nord Stream 2 gas pipeline to harm Ukraine or other Eastern European countries, but the deal faces opposition in both countries.

The agreement, hammered out by senior U.S. and German officials and first reported by Reuters on Monday, will resolve a long-standing dispute over the $11 billion pipeline, now 98% complete, being built under the Baltic Sea to carry gas from Russia’s Arctic region to Germany.

U.S. officials continue to oppose the pipeline, but say the accord would mitigate the possibility of Russia using energy as a weapon against Ukraine and other countries in the region.

Sources said Germany also agreed to take potential unspecified actions against Russia if it cut off energy supplies to Ukraine, in addition to seeking European Union sanctions, but details about those actions – or what specific behavior by Russia would trigger them – were not immediately available.

Germany would also contribute to a new $1 billion fund aimed at improving Ukraine’s energy independence, including through investments in green hydrogen, according to the sources.

Reports about the agreement drew immediate jeers from lawmakers in both Germany and the United States.

Republican Senator Ted Cruz, who has been holding up President Joe Biden’s ambassadorial nominations over his concerns about Nord Stream 2, said the reported agreement would be “a generational geopolitical win for Putin and a catastrophe for the United States and our allies.”

Cruz and other lawmakers are furious at Biden for waiving congressionally mandated sanctions against the pipeline.

The agreement will avert, for now, the resumption of sanctions against Nord Stream 2 AG and its chief executive. Biden waived those sanctions in May to allow time for both sides to negotiate a way forward.

Some U.S. lawmakers have already introduced an amendment that would prevent the Biden administration from continuing to waive the sanctions, although the prospects for passage remain uncertain.

U.S. officials have sought to reassure lawmakers that the Biden administration will reserve the right to use sanctions on a case-by-case basis, in line with U.S. law.

In Germany, top members of the environmentalist Greens party, called the reported agreement “a bitter setback for climate protection” that would benefit Russian President Vladimir Putin and weaken Ukraine.

“At a time when Putin is putting massive rhetorical and military pressure on Ukraine and once again questioning the country’s sovereignty, Washington and Berlin are sending the wrong signals to Moscow,” said Oliver Krischer, vice-chairman of the party’s parliamentary group, and Manuel Sarrazin, spokesman for Eastern European policy.

“Any entity involved in the Nord Stream 2 pipeline risks U.S. sanctions and should immediately abandon work on the pipeline,” Blinken said in a statement, adding the Biden administration is committed to complying with 2019 and 2020 legislation with regards to the pipeline and sanctions.

Shortly after Blinken’s statement, Senator Ted Cruz, a Republican and an opponent of the pipeline, lifted a hold he had placed on two of President Joe Biden’s nominees, including William Burns for director of the Central Intelligence Agency.

Nord Stream 2, led by Russia state energy company Gazprom with its Western partners, would double the capacity of an existing link to take Russian gas to Germany under the Baltic Sea. Biden believes the project is a “bad deal” for Ukraine and Central and Eastern European allies, Blinken said.

The pipeline would bypass Ukraine, likely depriving it of lucrative transit revenues and potentially undermine its efforts against Russian aggression.

Sanctions law that went into effect this year require the State Department to sanction companies that help Nord Stream 2 lay pipeline or provide insurance or certification of its construction. Nearly 20 companies, mostly insurance firms, recently quit the project after Washington warned them in recent months that they could be sanctioned.

Cruz said he would maintain a hold on Wendy Sherman, who Biden has nominated to be the No. 2 official at the State Department until the administration imposes full sanctions on ships and companies involved in the project. Sherman easily passed through the Senate Foreign Relations Committee last week and a hold would only likely delay a full Senate vote on her nomination. 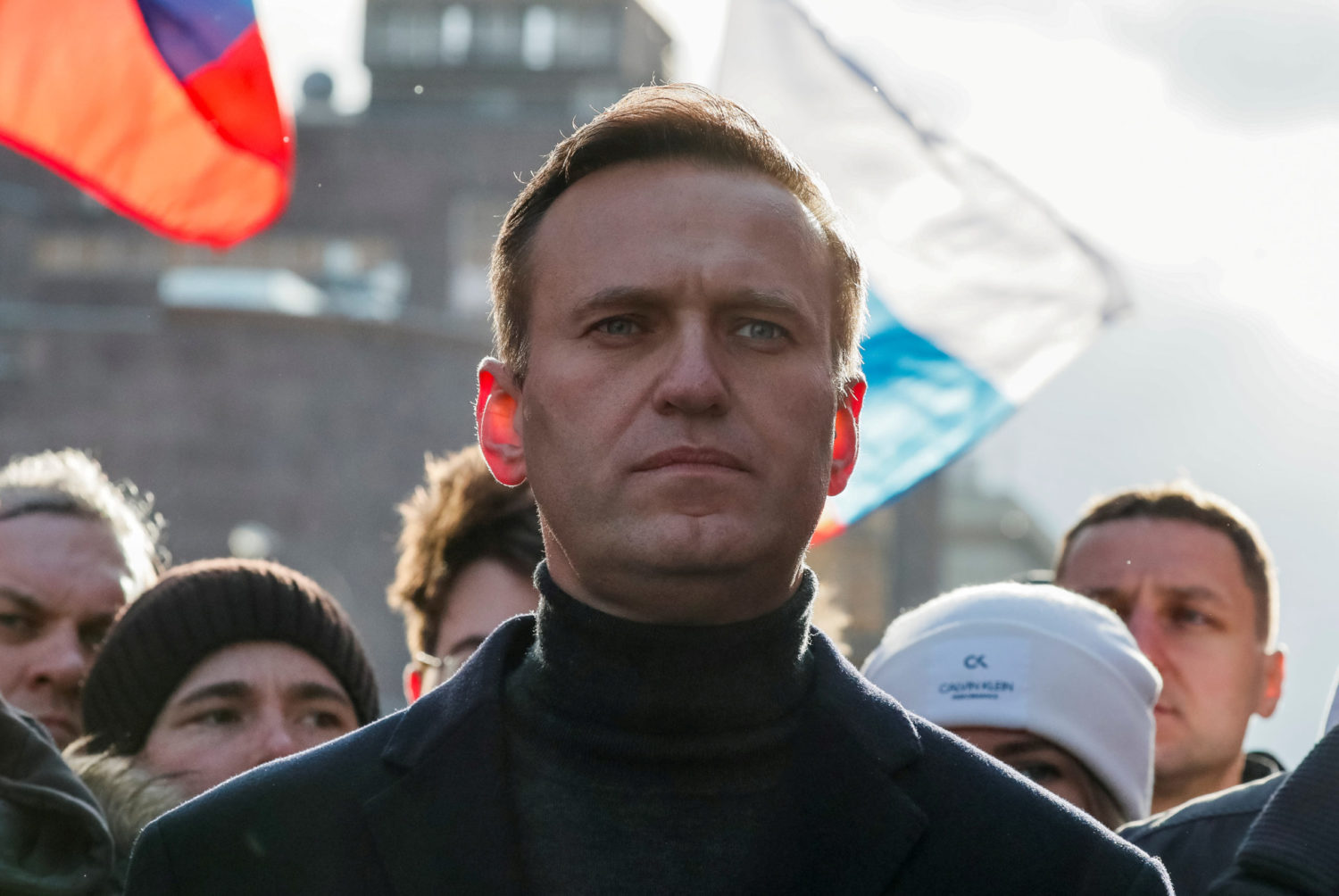 By Andrew Osborn and Madeline Chambers

MOSCOW/BERLIN (Reuters) – Russia said on Thursday the West should not rush to judge it over the poisoning of Kremlin critic Alexei Navalny and that there were no grounds to accuse it of the crime, as talk in the West of punishing Moscow intensified.

The Kremlin was speaking a day after German Chancellor Angela Merkel said Navalny had been poisoned with a Soviet-style Novichok nerve agent in an attempt to murder him and that she would consult NATO allies about how to respond.

Navalny, 44, is an outspoken opponent of Russian President Vladimir Putin and has specialized in high-impact investigations into official corruption. He was airlifted to Germany last month after collapsing on a domestic Russian flight after drinking a cup of tea that his allies said was poisoned.

Berlin’s Charite hospital, which is treating Navalny, has said he remains in a serious condition in an intensive care unit connected to an artificial lung ventilator even though some of his symptoms are receding.

Novichok is the same substance that Britain said was used against a Russian double agent and his daughter in an attack in England in 2018. The deadly group of nerve agents was developed by the Soviet military in the 1970’s and 1980’s.

Kremlin spokesman Dmitry Peskov said Moscow rejected any suggestion that Russia had been behind the attack on Navalny and warned other countries against jumping to conclusions without knowing the full facts.

“There are no grounds to accuse the Russian state. And we are not inclined to accept any accusations in this respect,” Peskov told reporters.

“Of course we would not want our partners in Germany and other European countries to hurry with their assessments.”

Russian prosecutors have said they see no reason to launch a criminal investigation because they say they have found no sign a crime was committed, though pre-investigation checks are continuing.

Peskov said Russia was eager to know what had happened to Navalny, but couldn’t do so without receiving information from Germany about the tests that had led to Berlin’s conclusions about Novichok.

OPCW, the global chemical weapons agency, said the poisoning of any individual with a toxic nerve agent would be considered use of a banned chemical weapon.

The European Commission said the bloc could only slap new sanctions on Russia after an investigation revealed who was responsible for Navalny’s poisoning. Lithuania said it would ask EU leaders to discuss the poisoning at their next summit.

Merkel said that any German or European response would depend on whether Russia helped clear up the case.

After her strong statement on Wednesday, she is under pressure at home to reconsider the Nord Stream 2 pipeline, which will take gas from Russia to Germany.

“We must pursue hard politics, we must respond with the only language (Russian President Vladimir) Putin understands – that is gas sales,” Norbert Roettgen, head of Germany’s parliamentary foreign affairs committee, told German radio.

“If the Nord Stream 2 pipeline is completed now, it would be the maximum confirmation and encouragement for Putin to continue this kind of politics,” Roettgen, a member of Merkel’s conservatives, told German television separately.

Nord Stream 2 is set to double the capacity of the existing Nord Stream 1 pipeline in carrying gas directly from Russia to Germany. Led by Russian company Gazprom with Western partners, the project is more than 90% finished and due to operate from early 2021. This may complicate efforts to stop it.

It is fiercely opposed by Washington and has divided the European Union, with some countries warning it will undermine the traditional gas transit state, Ukraine, and increase the bloc’s reliance on Russia.

Peskov said the Kremlin regarded talk of trying to thwart Nord Stream 2 as being based on emotions. He said the project was a commercial one which benefited Russia, Germany and Europe.

“We don’t understand what the reason for any sanctions could be,” said Peskov.

(Additional reporting by Gabrielle Tétrault-Farber, Anton Kolodyazhnyy and Maxim Rodionov in Moscow and by Thomas Seythal and Vera Eckert in Berlin and by Gabriela Baczynska, John Chalmers, and Marine Strauss in Brussels, Andrius Sytas in Vilnius and Anthony Deutsch in Amsterdam; Editing by William Maclean)