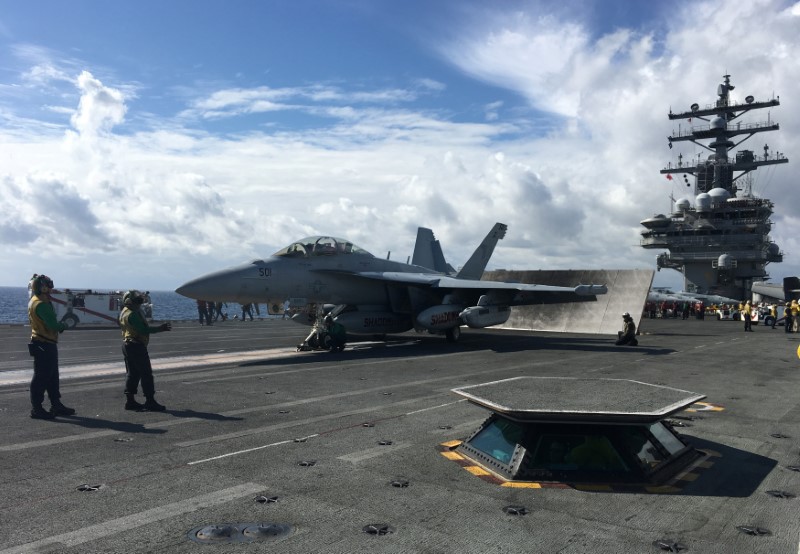 ABOARD USS RONALD REAGAN, Sea of Japan (Reuters) – The USS Ronald Reagan, a 100,000-ton nuclear powered aircraft carrier, patrolled in waters east of the Korean peninsula on Thursday, in a show of sea and air power designed to warn off North Korea from any military action.

It is conducting drills with the South Korean navy involving 40 warships deployed in a line stretching from the Yellow Sea west of the peninsula into the Sea of Japan.

“The dangerous and aggressive behavior by North Korea concerns everybody in the world,” Rear Admiral Marc Dalton, commander of the Reagan’s strike group, said in the carrier’s hangar as war planes taxied on the flight deck above.

“We have made it clear with this exercise, and many others, that we are ready to defend the Republic of Korea.” 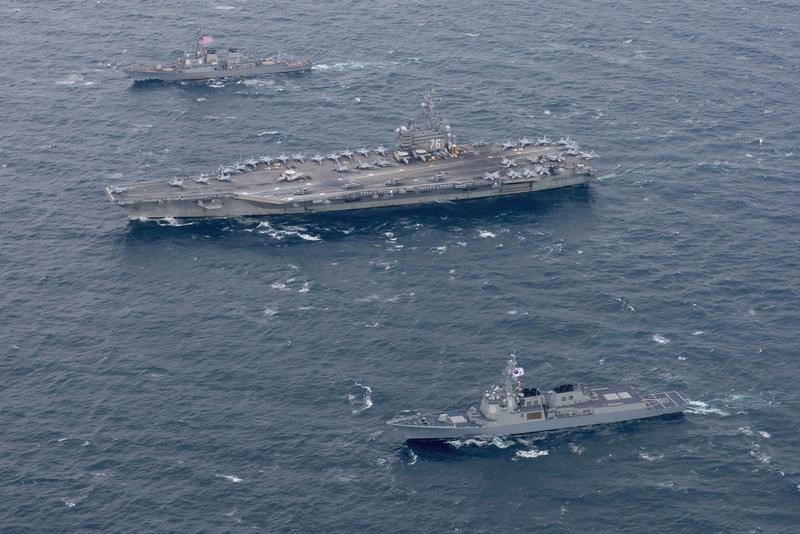 The Reagan’s presence in the region, coupled with recent military pressure by Washington on Pyongyang, including B1-B strategic bomber flights over the Korean peninsula, comes ahead of President Donald Trump’s first official visit to Asia, set to start in Japan on Nov. 5, with South Korea to follow.

North Korea has slammed the warship gathering as a “rehearsal for war”. It comes as senior Japanese, South Korean and U.S. diplomats meet in Seoul to discuss a diplomatic way forward backed up by U.N. sanctions.

The U.N. Security Council has unanimously ratcheted up sanctions on North Korea over its nuclear and ballistic missile programmes since 2006. The most stringent include a ban on coal, iron ore and seafood exports that aim at halting a third of North Korea’s $3 billion of annual exports.

On Monday, Kim In Ryong, North Korea’s deputy U.N. envoy, told a U.N. General Assembly committee the Korean peninsula situation had reached a touch-and-go point and a nuclear war could break out at any moment.

A series of weapons tests by Pyongyang, including its sixth and most powerful nuclear test on Sept. 3 and two missile launches over Japan, has stoked tension in East Asia.

A Russian who returned from a visit to Pyongyang has said the regime is preparing to test a missile it believes can reach the U.S. west coast.

Washington has not ruled out the eventual possibility of direct talks with the North to resolve the stand-off, U.S. Deputy Secretary of State John J. Sullivan said on Tuesday. 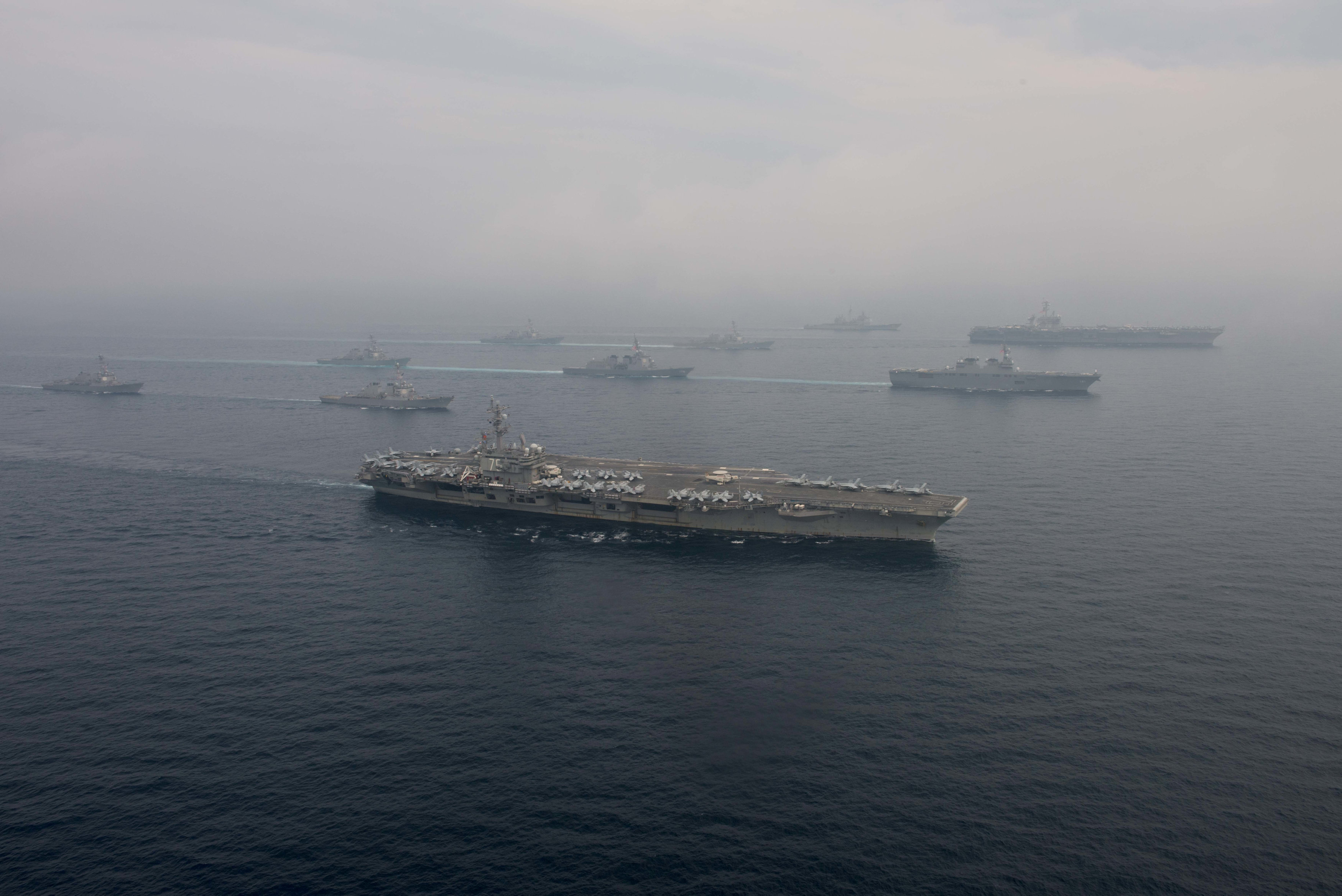 Japan’s Maritime Self Defence Force has sent two ships, including one of its four helicopter carriers, the Hyuga, to join the U.S carriers, the USS Ronald Reagan and USS Carl Vinson, and their eight escort ships, Japan’s military said in a release.

“It’s the first time we have exercised with two carriers. It’s a major exercise for us,” a Japanese military spokesman said.

The Sea of Japan separates Japan from the Korean peninsula. 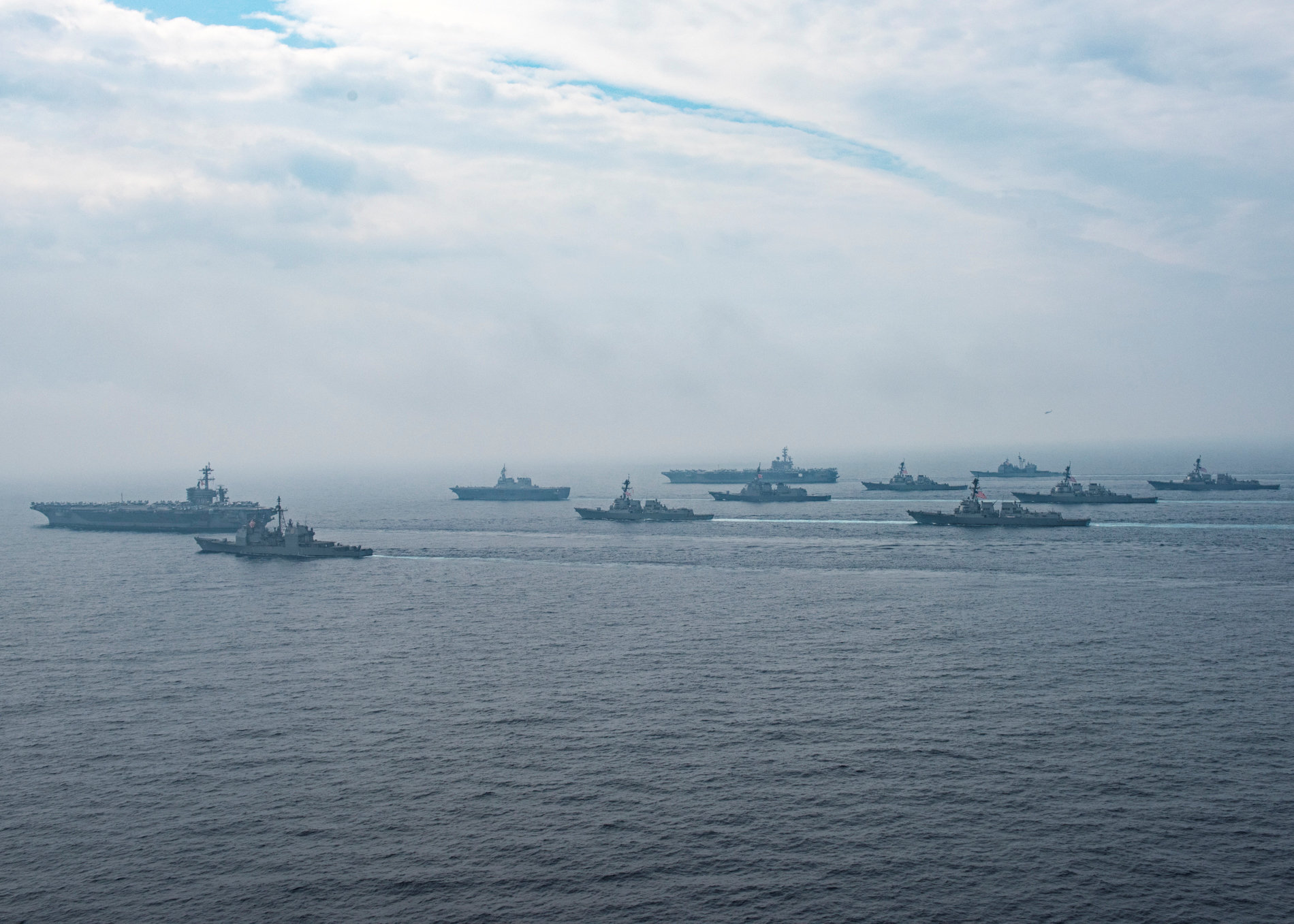 The United States sent the warships to the region after a surge of tension on the Korean peninsula over fears the North was about to conduct a sixth nuclear test, or another test in its bid to develop an intercontinental ballistic missile capable of hitting the mainland United States.

Japanese Prime Minister Shinzo Abe has vowed to work with other countries to deter North Korea, which on Monday conducted a short-range ballistic missile test.

The missile reached an altitude of 120 km (75 miles) before falling into the Sea of Japan in international waters, but inside Japan’s exclusive economic zone where it has jurisdiction over the exploration and exploitation of maritime resources.

The launch followed two successful tests of medium-to-long-range missiles in as many weeks as North Korea conducts tests at an unprecedented pace,

North Korea can already strike anywhere in Japan with missiles, raising concern in Tokyo that it could eventually be threatened by a North Korean nuclear strike.

South Korea’s new liberal president, Moon Jae-in, who took office on May 10, has taken a more conciliatory line than Abe, pledging to engage with his reclusive neighbor in dialogue.